Panse, Bhojane, and Tejaswini: Anaesthetic management of a case of pulmonary thromboembolism with pulmonary artery hypertension posted for bipolar hemiarthroplasty

Trauma to long bones causing fractures of is often associated with complications like deep vein thrombosis (DVT) and pulmonary embolism (PE).1 The incidence of the deep venous thrombosis is reported as between 1% and 2% following fracture of the long bones;2 and of pulmonary embolism varies between 2.3 and 22%.3 Cases of intraoperative Acute Pulmonary thromboembolism have been being reported,4 but there is no record of a case of preoperative existing pulmonary thromboembolism being operated for the long bone surgery.

A 62-year old female came with h/o trauma to Right hip 6 days back, she was a known case of Hypertension on T. Telmisartan 40mg + T Amlodipine 5mg OD. There was no history of head injury, loss of consciousness, vomiting, ENT bleed, no history of difficulty in breathing or chest pain.

On General Examination, her vitals were normal with RR-16/min and SpO2- 96% on room Air. On Systemic examination she had pansystolic murmur and air entry decreased on Left > Right. X-ray pelvic hip bone (PHB) was suggestive of closed right sub capital neck of femur fracture (Figure 1). 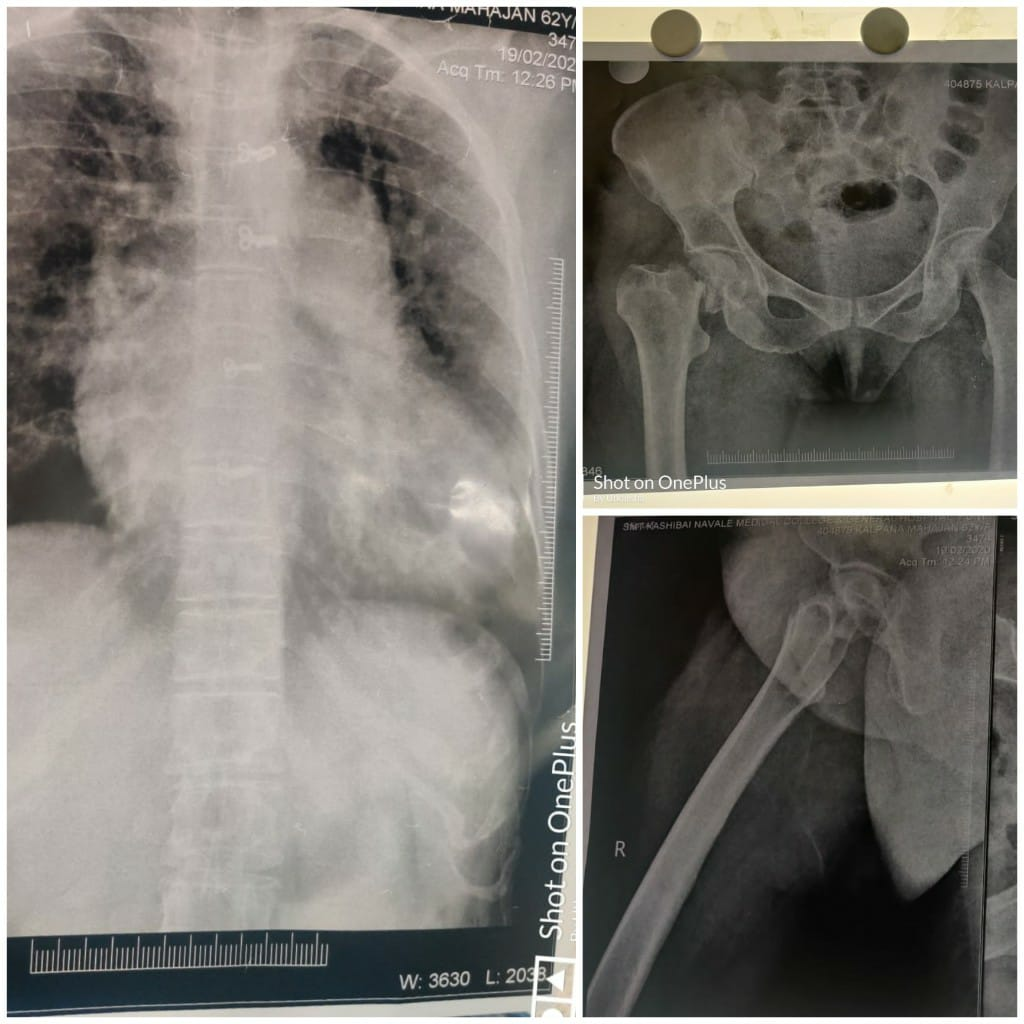 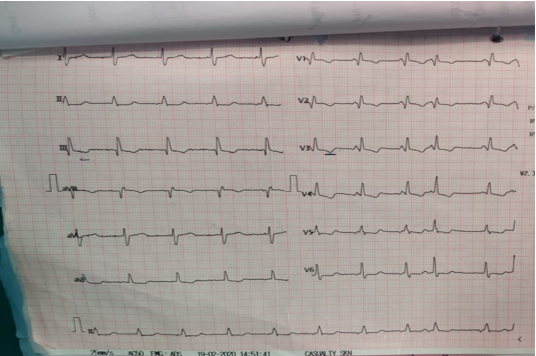 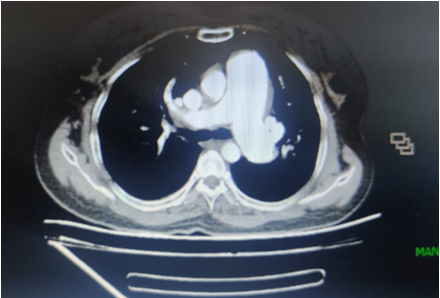 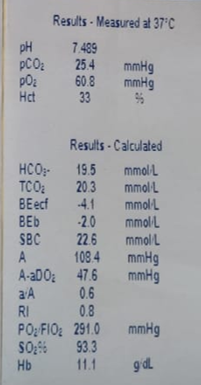 Written informed high risk consent was taken. Nil by mouth hours were confirmed, wide bore IV line was secured. As the patient was on anticoagulant therapy General Anesthesia (GA) was planned. All monitors(ECG, NIBP, SpO2) were attached, USG guided fascia iliaca compartment block (FICB) with 30ml of inj Bupivacaine 0.25% was given. The right sided radial artery was canulated and transduced (IBP). Under USG guided, triple lumen central line was secured in right internal jugular vein, and transduced(CVP) (Figure 5). The patient was preoxygenated with 100% O2 for 3 mins. Premedication was done with Midazolam 0.03mg/kg iv, Glycopylorate 4mcg/kg iv, Ondansetron- 0.08mg/kg iv, Fentanyl 2mcg/kg iv. Induction was done with Inj Etomidate 0.3mg/kg iv, Vecuronium 0.1mg/kg and Intubation was done with ETT 7. The patient was maintained on O2, Air and sevoflurane with tidal Volume of 380ml, RR-12/min and peak pressure-18mm Hg. Post induction Hypotension was treated with Phenylephrine 0.5-0.6mcg/kg IV. Intravenous fluids were transfused at a rate of 4ml/kg for first 30 minutes followed by 2ml/kg for rest of the surgery. For analgesia Inj Paracetamol 20mg/kg IV was administered. 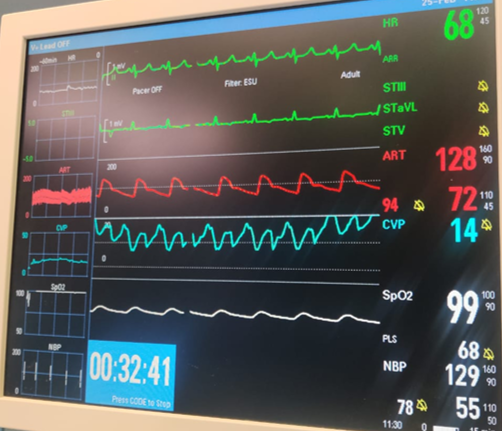 Hemodynamics were maintained within acceptable range (10% variability from baseline) intraoperatively. Bipolar hemiarthroplasty lasted for around 60 mins. The patient was reversed with Inj Neostigmine 0.05mg/kg+ Glycopylorate 8mcg/kg, and extubated. After extubation the patient was tachypnoeic and had Bilateral(B/L) crepts, which was treated with Inj Frusemide 40mg+20mg iv and Nebuliazation with Iptratropium bromide & Budecort. The patient’s symptoms improved over 30 mins. Total intraoperative blood loss was approximately 350ml with replacement of fluids with 1 Crystalloid and 1 colloid and Urine output was 600ml. The patient was shifted to ICU for observation.

A triad of Virchow’s comprising of blood coagulation, venous stasis, and endothelial injury initiates formation of thrombotic plaques in pulmonary veins.5 Risk Factors leading to PE include hypercoagulable states, immobilization, surgery, trauma, pregnancy, oral contraceptives, hereditary factors, and medical illnesses, including cancers.6 VTE is often an after effect of trauma and major orthopedic surgery, while the incidence of massive PE is rare.7

While the pulmonary artery area is obstructed more than 50% it is known as Pulmonary embolism. The major etiopathogenesis causing PAH is hypothesized to be the remodelling of small pulmonary arteries (<500 μm diameter) via the proliferation of smooth muscle and endothelial cells.8

Obstruction of the Pulmonary arterial lumen in turn leads to rise in Pulmonary Vascular Resistance (PVR), increase in alveolar dead space and redistributes pulmonary blood flow causing impairment of gas exchange.9 As right ventricular pressure increases, it exerts elevated tension on the ventricular wall and leading to its dilatation, dysfunction, and hampered perfusion of the it.10

These patients exhibit acidosis and hypoxia on arterial blood gas analysis. PVR is highly elevated which along with right ventricular dysfunction causes a fixed cardiac output state which in turn makes these patients highly vulnerable to any reduction in SVR and myocardial depression as might be caused by anaesthetic agents.11

First line investigations like ECG, chest X-ray and blood-gas analysis are advised to rule out any probability of PE and should be always corelated with general condition of the patient. CTPA is now considered the gold standard for diagnosis of pulmonary embolism. CTPA not only assesses the size and obstruction caused by the clot but also helps in early diagnosis of patients with enlarged right ventricular who are more prone to risk of early death.10

The choice of anaesthetic agent which does not cause elevation in PVR and still preserves haemodyanamic parameters is very important in these patients.14

Gooding JM et al. concluded that Etomidate has a cardio stable profile when used as an induction agent in patients with pre-existing cardiovascular disease.15 Etomidate has known to have better cardiovascular protective action as it causes minimal hypotension after induction leading to maintained coronary perfusion, avoiding dysrhythmia and even cardiac arrest.16

Weiss-Bloom et al. preferred Etomidate along with fentanyl as this combination has been found to be safe in terms of providing hemodynamic stability during both induction of anesthesia and tracheal intubation in patients with cardiac disease.17

Rocuronium is the preferred agent for muscle relaxation in patients with pre-existing cardiovascular disease as it has a rapid onset of action and minimal cardiovascular side effects,18 but due to emergency and non-availability of the drug at the time of surgery we used Vecuronium.

In cases of pre-existing pulmonary hypertension Nitrous oxide should be avoided because of its property to cause a rise in pulmonary vascular resistance due to venoconstriction of the pulmonary vasculature. This causes an increase in right atrial pressure.19

Predisposing factors like hypoxia, hypercarbia, acidosis, high airway pressure etc. which cause elevation in PVR should be carefully avoided.20

The need for Inotropes can arise at any point of time in the perioperative period due to the presence of RV dysfunction in these patients. Norepinephrine (NE) is the inotropic agent of choice for patients with RV dysfunction. NE exerts its effect by direct ionotropic action on smooth muscles and maintains RV perfusion, elevates mean arterial pressure, cardiac output, stroke volume and improves RV performance without significant increase in PVR. We used phenylephrine (second drug of choice) in our case due to nonavailability.21

Casu et al. in their study found that diuretics effectively relieve the overload of congestive heart failure and aid in its treatment.22

Kato et al. studied that pulmonary function was found to improve with anticholinergic bronchodilator therapy along with reduction in the severity of cardiac failure in compensated heart failure.23

These patients are prone to congestive heart failure. Postoperative (B/L basal crepts + tachypnea) impending to cardiac failure were timely managed with Diuretics and Bronchodilators in our patient.

Anaesthetic management of a case of pre-existing acute pulmonary embolism posted for non cardiac emergency surgery is a challenge in itself. The skills of the anaesthetist are put to test in managing stable haemodynamic parameters perioperatively.

In hemodynamically stable patients it is better to operate the underlying fracture as soon as possible to avoid further aggravation and complication of the condition. We managed the case successfully under General anesthesia.

R Auer J Riehl The incidence of deep vein thrombosis and pulmonary embolism after fracture of the tibia: An analysis of the National Trauma DatabankJ Clin Orthop Trauma2017813844