Kulkarni and Shetty: Excision of intra-dural dorsal spine meningioma with intra-operative neuromonitoring in a patient with post-pneumonectomy status- an anaesthetic challenge

Post-pneumonectomy patient poses challenge in anaesthesia management as pneumonectomy may represent an extreme example of pulmonary compromise.1 Pulmonary disease is a known risk factor for peri-operative pulmonary complications. We present a case of a 65-year old female patient with left pneumonectomy done 5 years ago, for excision of intradural D10 level meningioma with intra-operative neuromonitoring to achieve safe excision of lesion and intact neurological outcome.

A 65-year-old female patient weighing 48 kg was posted for excision of intradural D10 meningioma with intra-operative neuromonitoring. The patient had complained of backache and tingling sensation in both lower limbs since two months. She had history of left pneumonectomy done 5 years ago for bronchogenic cyst. She was also a known case of hypertension on beta-blocker for the same. She was otherwise comfortable with good effort tolerance. Magnetic reasonance imaging was suggestive of intraspinal extra-medullary posteriorly located meningioma at D10 displacing and compressing the cord anteriorly.(Figure 1) Chest radiograph showed left post-pneumonectomy status with mediastinal shift to the left.(Figure 2) The pulmonary function test revealed severe restriction, moderate obstruction with good reversibility to bronchodilators. Room air arterial blood gas showed partial pressure of oxygen as 76 mm of Hg and partial pressure of carbon dioxide as 42.3 mm of Hg. All other blood investigations, electrocardiogram and echocardiogram were within normal limits. She was evaluated by respiratory physician for peri-operative optimization and was advised bronchodilator nebulisation. The respiratory physician deemed the surgery as high risk from respiratory point of view. Detailed preoperative anaesthetic assessment was done, consent and high risk consent were obtained. Standard fasting guidelines were followed with 6 h for solid, liquid and clear fluid till 2 h prior to surgery. Operation theatre was prepared taking into consideration patient condition, prone position and need for intra-operative neuromonitoring. Patient was wheeled into operation theatre and standard monitoring was initiated. The baseline vitals recorded were heart rate 80/minute, blood pressure 180/78 mm of Hg and saturation 97% on room air. Left radial artery was cannulated under local anaesthesia and room air arterial blood gas was send, which showed PaO2 of 66.8 mm of Hg and PCO2 of 42 mm of Hg. General anaesthesia was induced after preoxygenation with fentanyl 50 microgram, propofol 100 mg and atracurium 50 mg. Trachea was intubated with cuffed endotracheal tube and the cuff was carefully positioned just under the vocal cords. Tube position was reconfirmed to be atleast 2.5 cm above the carina with bronchoscopy and secured so as to prevent inadvertent endobronchial intubation during positioning. Bite block was used to prevent inadvertent biting during stimulation for intra-operative neuromonitoring, as relaxant was to be avoided. Neuromonitoring in form of Somatosensory evoked potentials[SSEP] and motor evoked potentials[MEP] was attached prior to giving prone position. In the prone position, all pressure points were padded with gel pads, bolsters were placed along each side from clavicle to iliac crest to promote low abdominal and thoracic pressure. Haemodynamics were closely monitored during positioning to detect any changes in heart rate or blood pressure due to pulmonary or cardiac stretching. Anaesthesia was maintained with low dose sevoflurane [minimum alveolar concentration less than 0.5] in air –oxygen mixture with infusion of dexmedetomidine 0.5 mcg/kg/h, propofol titrated to maintain adequate depth of anaesthesia[BIS 40 -60] and bolus of fentanyl as required. Patient was ventilated with pressure controlled mode, to achieve tidal volume of 5-6 ml/kg/breath. Normothermia, normotension and normocapnia were maintained throughout the surgery. Intra-operative neuromonitoring was used till complete excision of tumor. There were no changes noted in SSEP as well as MEP throughout the surgery. After complete excision of tumor, site was closed in layers and infiltrated with 10 ml of 0.25% bupivacaine. Blood loss was around 200 ml. Arterial blood gas during closure was within normal limits. In the end, patient was awaken, extubated on ensuring adequate breathing and following verbal commands. Patient had no neurological deficit in post-operative period. She was observed in intensive care unit for a day and then shifted to ward. Post-operative analgesia was provided with intravenous Paracetamol three times a day. Patient was comfortable and discharged home on fifth post-operative day. 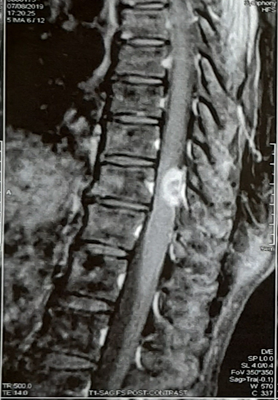 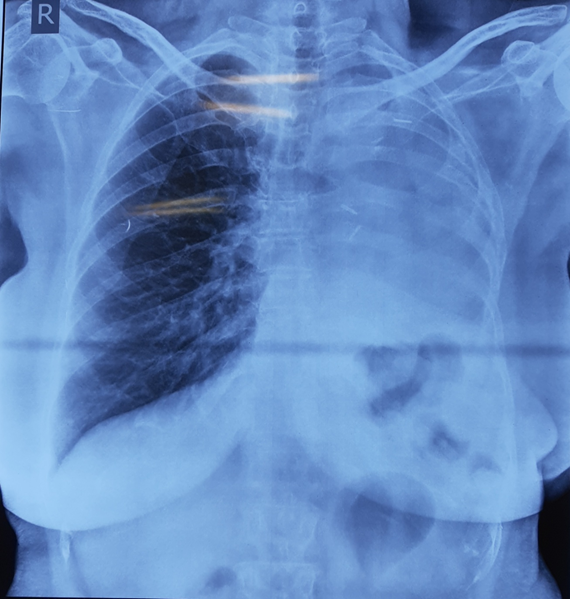 We present a case of a patient with post-pneumonectomy status, undergoing excision of D10 meningioma with intra-operative neuromonitoring.

Post-pneumonectomy state is associated with various anatomical and physiological changes.1 Over a period, the heart and mediastinal structures deviate towards the side of the resection, while the remaining lung may undergo compensatory hyperinflation and herniation. Post pneumonectomy syndrome is a rare complication seen in patients undergone pneumonectomy, occurring due to an excessive mediastinal shift, resulting into stretching and extrinsic compression of tracheobronchial tree and oesophagus.2, 3 The presentation includes progressive dyspnea on exertion, stridor and ultimately respiratory failure. Our patient had mediastinal shift towards left on chest radiograph but no respiratory symptoms.

Respiratory reserve is diminished after pneumonectomy. Pulmonary function test usually reveals a mixed restrictive and obstructive pattern as was seen in our patient also. Respiratory physician was involved in peri-operative period for optimization of respiratory function.

Surgery on dorsal spine required prone positioning of the patient. Prone position is associated with various cardiovascular and respiratory changes.4 In the prone position, the dorsal wall lifts up, diaphragm remains similar to supine and ventral wall is impeded from expanding. Also in prone position the gravity and shape differences of lung and chest wall act in opposite direction, resulting into more uniform alveolar inflation than supine. Perfusion remains similar. Ventilation-perfusion ratio is homogenously distributed in prone position.5 Prone position should be given with proper support to avoid abdominal compression and adequate padding on pressure points must be ensured.6 Endotracheal tube should be secured firmly to prevent any movement of tube during prone positioning. Displacement of tube distally may result into endobronchial intubation, to the side of the bronchial stump.

The functioning of the lungs was closely monitored as follows

Protective ventilation was instituted, and clear communication was maintained throughout with the understanding of immediately stopping surgery to allow Anaesthesia team to evaluate and correct abnormalities in lung function. An ICD drain system was kept ready for immediate application in case of an inadvertent pneumothorax.

Intra-operative neuromonitoring in spine surgery evaluates the integrity of the nervous system continuously while patient undergoes procedures that have the potential to cause injury to nervous system.7 Neuromonitoring personnel must be able to identify neural irritation or injury at a time when the surgeon can take steps to reduce or reverse the damage.7 SSEP allows to assess the functional integrity of the sensory pathways from the peripheral nerve, through the dorsal column and to the sensory cortex. An increase in latency greater than 10% and a decrease in amplitude greater than 50% of SSEP constitutes warning signals.8 MEP assesses the descending motor pathways in spinal cord, more than 50% decrease in amplitude is considered significant.

Both SSEP and MEP are affected by various pharmacological and physiological factors.8 Anaesthetics affect the SSEP and MEP, hence, anaesthetic technique needs to be modified to facilitate SSEP and MEP monitoring.

Volatile agents result in dose dependant increase in latency and decrease in amplitude of SSEP and abolition of myogenic MEP.9 0.5 MAC or less of volatile anaesthetic is preferred for recording.9 Intra-venous anaesthetics produce lesser effect on evoked potentials than inhalational agents. Propofol and midazolam decreases the amplitude of SSEP and is also a powerful suppressant of MEP, but produces acceptable condition for neuromonitoring as a component of total intra-venous anaesthesia(TIVA). Ketamine can enchance cortical SSEP amplitude and has little effect on MEP. Dexmedetomidine has minimal effect on evoked potentials and used in TIVA.10 Opioids have little effect of spinal and subcortical SSEP. Fentanyl improves the myogenic responses. Muscle relaxants have no direct influence on SSEP. Myogenic MEP may not be possible with deep neuromuscular blockage. A stable neuromuscular blockade at 45-55% of baseline, provides reliable muscle responses during intra-operative myogenic MEP monitoring. Considering the effects of various agents, we used low dose sevoflurane in air-oxygen mixture, along with continuous infusion of dexmedetomidine and propofol, titrated to maintain BIS between 40-60 to ensure adequate depth of anaesthesia. Fentanyl bolus of 0.5-1 mcg/kg were administered when required. We completely avoided muscle relaxant after the induction and full recovery from the same was ascertained by the Train of Four monitoring. Inadvertent movement during surgery has important implications for the airway due to the risk of the displacement of the ETT on the side of bronchial stump. A stable level of anaesthesia and haemodynamics were maintained throughout the surgery, to prevent any influence on evoked potentials. There was no significant change in SSEP and MEP recorded, with complete excision of the meningioma achieved by the surgeon. Post-operative pain relief was provided with bupivacaine infiltration and intra-venous paracetamol.