Rao and Velmurugan: A case report of anaesthesia for craniotomy in sitting position

A case report of anaesthesia for craniotomy in sitting position

Tumors in the posterior fossa can be done in lateral, supine, prone, sitting and in park bench positions. Depending on the exact position of the lesion and the technical preference of the surgeon, sitting position may be preferred. Sitting position grants best possible access to deeper structures with minimal retraction. However, maintenance of anaesthesia in this position for long duration pose some serious challenges to the anaesthesiologist including high risk of venous air embolism (VAE), hemodynamic instability and respiratory disturbances. Here, we present a case report of a 36year old male diagnosed with pineal gland space occupying lesion (SOL), operated in the sitting position under general anaesthesia. We discuss about anaesthetic management and possible complications that can be encountered.

Posterior fossa surgery in sitting position was first done in 1914 by De Martel under local anaesthesia.1 Frazier and Gardner reported use of this position for surgery on the Gasserian ganglion in 1928.1 With advent of newer technologies, more challenging procedures were done in sitting position.

Posterior fossa surgeries in the sitting position provide many surgical advantages. The surgical field remains clear because of the blood drainage by gravity, better access to midline structures, decreased cerebrospinal fluid (CSF) pressure. Compared to prone and lateral positions, this position gives a clear view of the face for motor evoked response of the brainstem. However, considering the anaesthetic management, this position is associated with highest number of complications, the most feared being venous air embolism.2 Other complications include cardiac instability, arrhythmias, tension pneumocephalus, quadriplegia and macroglossia.3

A multidisciplinary approach between the theatre, surgical and anaesthesia team members is necessary regarding the arrangement and equipment for sitting position, surgical approach and duration, anaesthesia management intraoperatively. Here, we present a case of Pineal gland SOL, done in sitting position under general anaesthesia. We also discuss about the potential complications associated with this position and its management.

A 36/M (wt-75 kg, height-165cm), came with complaints of an episode of seizure two days ago. He also had headache for past 6 months, associated with nausea and vomiting and inability to focus on objects. There was no significant past or family history. After thorough neurological examination and investigations, the patient was diagnosed to have Pineal gland space occupying lesion. The procedure planned was a occipital craniotomy, a supra-cerebellar infratentorial approach with the patient in sitting posture under general anaesthesia.

Pre-operative assessment showed a history of Type II diabetes on insulin, with no other comorbid conditions. His effort tolerance was good, cardiac and respiratory systems were normal. Investigations including his ECG and echocardiogram were normal and was accepted under ASA II (American society of Anaesthesiologist classification). High risk informed consent was obtained. Reservation of blood products was done and postoperative elective ventilation was planned. 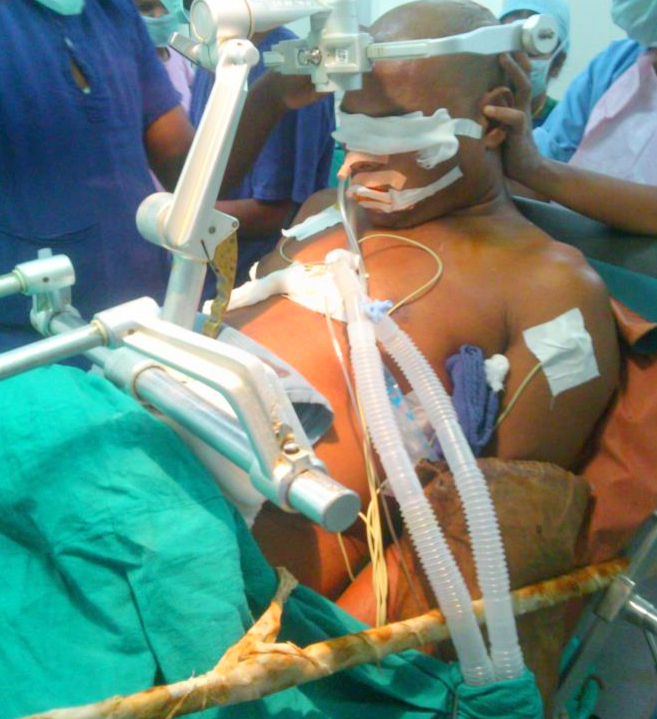 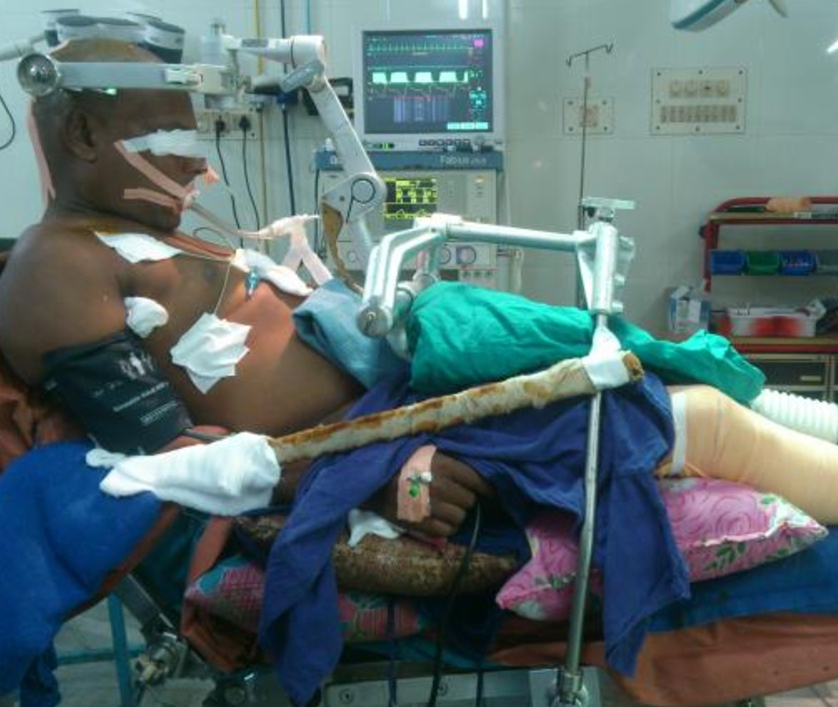 Positioning of the patient

Elastic bandages were tied over the lower limbs. Patient was positioned with both knees in partial flexion and hip in partial flexion with the help of pillows. Afterwards, head end elevation was performed slowly, monitoring hemodynamic changes, especially fall in blood pressure. Head position was fixed in flexion, with 2 finger breadths between the mandible and sternum.

Anaesthesia was maintained with oxygen and air at low flows with Sevoflurane and Propofol infusion at 50 µ/kg/hr. Fentanyl 50mcg and Vecuronium 2mg were given every hour, for maintaining analgesia and muscle relaxation respectively.

Controlled hyperventilation was performed with a tidal volume of 600ml and respiratory rate around 18/min, maintaining EtCO2 around 32-35mmHg. Mannitol 175ml (0.5g/kg) infusion and Lasix 20mg were given to facilitate reduction in CSF pressure.

Post-operatively, patient was sedated with a infusion of Fentanyl 50µg/h and paralyzed with Vecuronium 5mg and shifted to the post-operative ward. Patient was kept on elective post-op ventilation for 12 hours and gradually weaned the next day. Thorough oropharyngeal suctioning was done. After adequate neuromuscular recovery and return of airway reflexes, patient was reversed with Neostigmine 3mg (0.04mg/kg) and Glycopyrrolate 0.6mg and extubated. After extubation, patient was conscious, oriented (GCS – 15/15), vitals were stable. Upper airway assessment and post-operative lung function was normal. Neurological examination showed improvement.

The necessity of sitting position for an operative procedure has been in discussion for many decades. Though, still preferred by the neurosurgeon on many occasions, it can be anaesthetist’s nightmare because of high risk of complications. There are few advantages to the anaesthetist as well which include improved ventilation, superior access to the airway reduced facial swelling and most importantly, access to the anterior chest wall (resuscitative measures can be rapidly initiated, if necessary).2

However, the major considerations include

Most important change is hypotension due to various factors including hydrostatic effect of gravity resulting in venous pooling in extremities, depressant effect of intravenous and inhalational anaesthetic agents and intermittent positive pressure ventilation.3

Hypotension due to gravity can be reduced by careful positioning of the patient with flexion of hips, elevation of knees to the level of heart. Wrapping up of lower extremities from toes to groin helps in minimizing hypotension.

Ventilation is unimpeded as diaphragmatic excursion is greater than in horizontal position and airway pressures are lower. Though there will be an increase in functional residual capacity, because of the sitting position, there will be an associated decrease in perfusion which may obviate the expected benefits in oxygenation. Also, significant reduction in arterial oxygen content can occur due to reduced perfusion of upper lung regions, especially when associated with hypotension.4, 5

It is the most important major life threatening complication which can result in sudden death. Incidence with Doppler is found to be 26% - 50% while with TEE (Transesophageal echocardiography) it is 76% in the sitting position (17% in supine position).6 Conditions predisposing air entrainment include open vein and non-collapsible venous channels, decrease in dural sinus pressure by around 10mmHg and gravitational effect.

Venous air embolism can be detected by various modalities with ECG showing sinus tachycardia, S1Q3T3 pattern. EtCO2 will show reduction in the end-expiratory CO2 flow (0.15 ml/kg of air). Also, a classical ‘mill wheel murmur’ can be heard, with the precordial or esophageal stethoscope, However, Doppler ultrasound is more sensitive, can detect 0.05 ml/kg of air, produces an erratic roaring noise. TEE is the modality of choice and can detect even 0.015 ml of air, seen as an echo dense structure. Another advantage is, it can detect air in the left heart as well.3

Collection of air into the epidural or dural space sufficient enough to exert a mass effect can result in tension pneumocephalus. Incidence in sitting craniotomies is 3%. Sometimes, life threatening brain herniation can also occur. Causes include reduction of brain volume secondary to administration of mannitol, hyperventilation or removal of SOL, Also, contraction of intravascular blood volume associated with acute hemorrhage and gravitational effect of sitting position can also contribute.9 Management is relatively simple with intraoperative drainage of CSF - “Inverted Pop Bottle Analogy” as CSF pours out, air bubbles to the top of the container(cranium).

Nitrous oxide is a major contributing factor. It increases the size of air occupied space. However, its avoidance would not eliminate the risk. CT scan confirms the diagnosis and localization of intracranial air. If untreated, it can complicate to brain herniation and death. Treatment involves immediate twist drill aspiration of air through burr holes on either side of the vertex.10

Extreme flexion of the neck can lead to macroglossia mainly due to obstruction of its venous and lymphatic drainage leading to airway obstruction, hypoxia and hypercapnia post-op. Quadriplegia is a relatively rare complication resulting from stretching of spinal cord at level of C5, compromising regional cord perfusion.

Although the sitting position is associated with various complications, there are surgical and anaesthetic advantages to this position. Paying meticulous attention to careful positioning and pressure areas, as well as avoiding extreme flexion of the neck and keeping a high index of suspicion for possible VAEs, the sitting position is a safe alternative to the prone and lateral positions for posterior fossa and posterior cervical surgery.

J Michenfelder Central venous catheters in the management of air embolism: whether as well as whereAnesthesiology19815533941