Praneeth R and Venkatraj: Anaesthetic implications for splenectomy in a child with Gaucher’s disease

Anaesthetic implications for splenectomy in a child with Gaucher’s disease

Gaucher’s disease, a lysosomal storage disorder, is caused by an inherited deficiency of beta glucocerebrosidase enzyme leading to the accumulation of glucocerebroside in the reticuloendothelial system. Patients with this disease often manifest coagulation abnormalities and multi-organ complications. These factors present a challenge to the anaesthesiologist, in deciding the type as well as the conduct of anaesthesia. We aim to report the anaesthetic management in a 3-years old child with Gaucher’s disease posted for splenectomy.

Gaucher’s disease is caused by an inherited deficiency in beta glucocerebrosidase enzyme, due to biallelic mutations in GBA gene resulting in the accumulation of glucocerebroside in lysosomes, classically in tissue macrophages.1 Other cell types involved include osteoblasts, hepatocytes and immune cells. Widespread accumulation of glucocerebroside laden macrophages results in multi-organ dysfunction.2 This disease is classified into three broad phenotypes based on the presence or absence of neurological involvement and their severity.2

Type I – non neuronopathic or adult or chronic form

Is the mildest and the commonest variant and the median age of presentation is 3.6 years. Patients present with hepatosplenomegaly, cytopenia, irritability, and failure to thrive.

Is the rarest form and usually presents in the perinatal period and infancy. Disease progresses very rapidly leading to death by 2 years of age.

Multi-system involvement, other than nervous system is common to all forms of Gaucher’s disease.2 Patients present with hepatosplenomegaly and a combination of anaemia, thrombocytopenia and leukopenia. Hepatic involvement may lead to cirrhosis resulting in portal hypertension. Splenomegaly often manifests as hypersplenism. Coagulation factor deficiencies are also common in these patients and may occur independently of platelet abnormalities. Skeletal manifestations include collapsed vertebral bodies, avascular osteonecrosis, osteopenia, osteolytic lesions, pathological fractures and chronic bone pains with crises in some similar to the bone crisis in sickle cell disease.Rare manifestations include haematological malignancies like multiple myeloma and hepatocellular malignancy. Progressive neurodegenerative disease occurs only in types II and III.

Detection of insufficient enzyme activity remains the gold standard for diagnosis. Mutation analysis of GBA gene is an efficient method for patient classification and carrier diagnosis. Other tests include demonstration of Gaucher cells in the involved organs such as liver and bone marrow.

We present anesthetic management in a 3-year-old child with splenomegaly posted for splenectomy.

A thorough preanesthetic evaluation was done. Complete haemogram showed haemoglobin levels of 7.5 g/dL, total leukocyte count 1502 cells/mm3 and a platelet count 39400 cells/mm3. The rest of parameters including renal function tests, liver function tests, prothrombin time with INR, activated partial thromboplastin time were within normal limits. Ultrasound abdomen revealed a massive splenomegaly with a size of 21 cm. Prior discussions with the blood bank were established to arrange for leucodepleted blood and blood products for our patient in view of the existing pancytopenia. Preoperative blood and blood product transfusion was avoided as hypersplenism would result in massive red cell and platelet sequestration.

Endotracheal general anaesthesia with controlled ventilation was decided on as the mode of anaesthesia. Neuraxial block for perioperative analgesia was avoided in view of marked thrombocytopenia.

Child was pre-medicated using pedichloryl syrup 60 min prior to being shifted to operation theatre complex. Child was induced with step down technique of inhalational induction using sevoflurane. Intravenous access was secured on the dorsal aspect of left hand using a 22G cannula after inhalational induction. Intubation was done with a 4.5 mm ID endotracheal tube. Central venous access was secured under ultrasound guidance using a 3Fr triple lumen catheter in the right internal jugular vein. Arterial access was obtained in the right femoral artery under ultrasound guidance. Utmost precautions were taken during vascular cannulations to avoid multiple punctures as the child had marked thrombocytopenia. Extra care was taken during positioning the child keeping in mind the bony abnormalities that occur in patients with Gaucher’s disease. Antibiotic prophylaxis with a wide spectrum was administered keeping in mind both a leucodepleted patient as well as the splenectomy that was being performed.

Anaesthesia was maintained using oxygen and air with sevoflurane. Intraoperative course was uneventful. Transfusion was withheld till the step of splenic artery ligation as the transfused products would be subjected to sequestration as a result of hypersplenism. Leucodepleted red cells were transfused upto a volume of 60 ml and single donor platelets 60 ml was transfused following splenic artery ligation. Surgery lasted for 120 min and a massive spleen weighing 1.1kg was removed. All vitals remained stable throughout the procedure. Patient was reversed from muscle relaxant at the end of the surgery and extubated and shifted to paediatric ICU for further management. Patient was awake, alert and conversant in PICU. Postoperative analgesia was planned with morphine at 10 mcg/ kg/hr IV infusion. Postoperative laboratory values revealed a marked increase in haemoglobin levels to 9.8g/dL and a platelet count of 1,28,000 cells/ mm3. 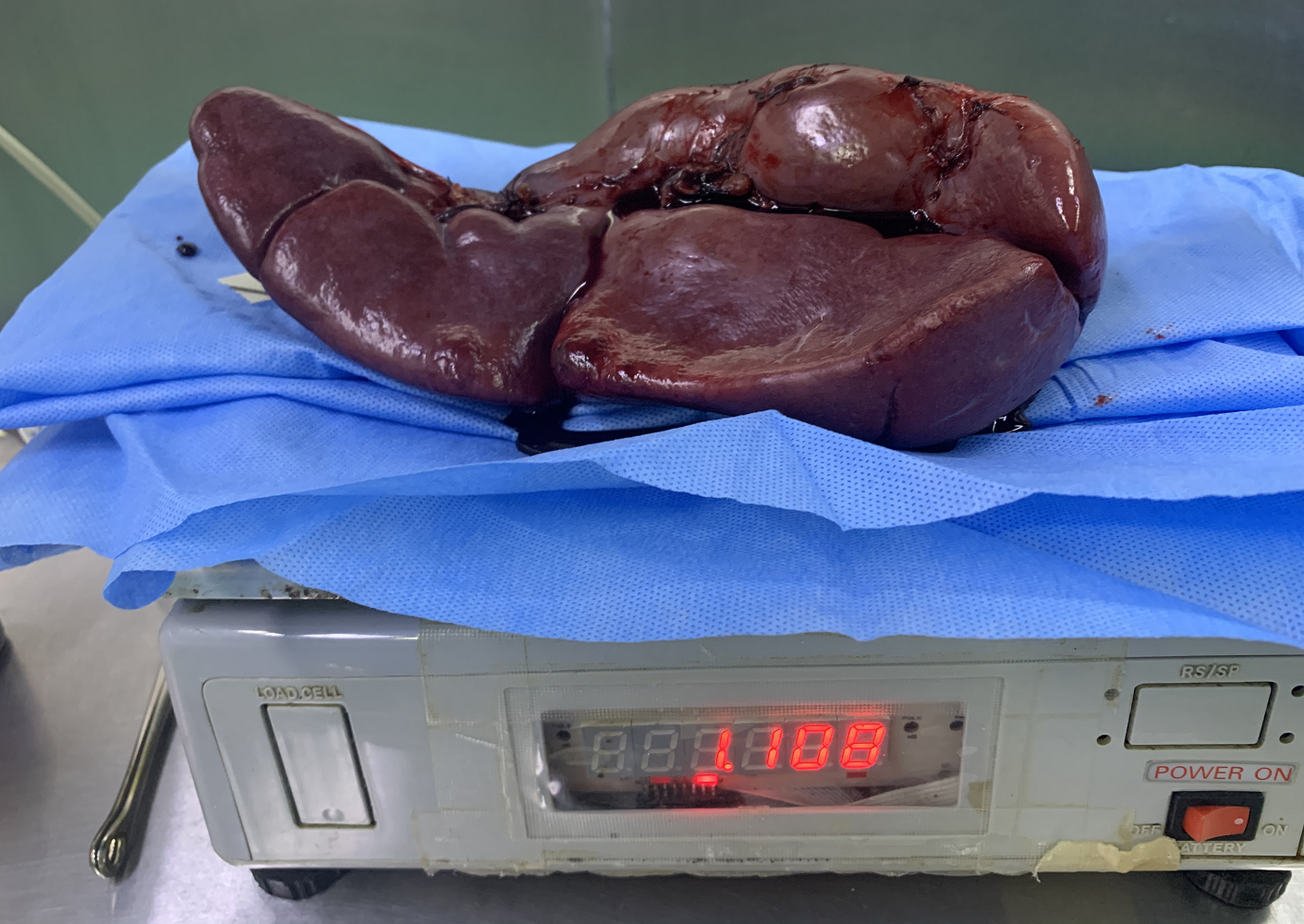 Gaucher’s disease is an anaesthetic challenge because of its varied presentation and multi-organ involvement. Nervous system is the most commonly affected leading to progressive neurodegenerative disease in Gaucher’s type II and III. Speech delay and oculomotor apraxia were the only neurological findings in our patient. Bulbar paresis leading to micro aspirations is of utmost concern to the anaesthesiologist. Our patient didn’t show any signs of bulbar involvement. Hepatosplenomegaly is the most common sign of visceral involvement. Hepatomegaly may lead to cirrhosis with hepatic fibrosis and portal hypertension whereas splenic enlargement results in hypersplenism.4, 5 Hypersplenism causes various haematological abnormalities including haemolytic anaemia, thrombocytopenia and leucopenia and hence for patients with Gaucher’s disease preoperative evaluation of haematological functions is of primary concern.6, 7 Our patient presented only with hypersplenism leading to pancytopenia. Hepatomegaly was peculiarly absent in our patient. Thorough evaluation of cardiac and pulmonary status should be done as a part of pre-anaesthetic workups in patients with Gaucher’s disease as few patients exhibit pulmonary hypertension with infiltrative lung disease. Our patient didn’t show any abnormalities in the cardiovascular and pulmonary systems. Other manifestations include failure to thrive and skeletal abnormalities (osteopenia, avascular necrosis, bone crises and severe bone pain) which warrant an extra care during patient transfer and positioning.

A thorough preoperative assessment is essential in order to determine the extent of organ involvement with particular emphasis to nervous system, liver, spleen, bone and bone marrow.6, 7

Cardiovascular and pulmonology evaluation has to be done to rule out pulmonary hypertension and signs of infiltrative lung disease.6, 7

Haematological abnormalities may be of primary concern as thrombocytopenia might preclude regional anaesthesia.

Regional anaesthesia can be administered only after prior evaluation of coagulation system as coagulation factor deficiencies can occur independently of thrombocytopenia in these patients.7, 8

Patients with neurological involvement might have bulbar paresis which can lead to micro aspirations and respiratory tract infections. Thorough pulmonary evaluation should be done in the preoperative period with adequate patient preparation with antibiotics and bronchodilators before induction of anaesthesia.

Careful attention should be exerted during positioning and patient transfer due to multiple skeletal abnormalities that occur in these patients.7, 8

All the above factors affect mode of delivery as well as the conduct of anaesthesia and hence Gaucher’s disease continues to remain an anaesthetic challenge.

Multi-organ nature of involvement, coexisting systemic illnesses and haematological abnormalities in Gaucher’s disease play a key role in deciding upon the type as well as conduct of anaesthesia. A multidisciplinary approach between the paediatrician, haematologist, surgeon, anaesthesiologist and intensivist is crucial in the successful management of these patients.

AC Ruiz AM Scapa, AM Francia AM Caparrós Gaucher's disease type I: an infrequent cause of portal hypertensionAn Med Interna19981594834