Thymic mass is a rare tumor in the anterior mediastinum. They are usually of unknown etiology. About 50% of patients are diagnosed incidentally on chest radiographs. A 45 years, BMI-28, male patient presented to cardiac outpatient department with breathlessness and persistent cough for past three months. He also complained of generalized fatigue and nonspecific chest pain. On chest x-ray (PA view), there were diffuse opacities in middle and lower zone and no tracheal compression or deviation. Lateral neck X-ray also ruled out any airway compression. Computed tomography thorax revealed a huge mass occupying the prevascular compartment of mediastinum and insinuating the visceral compartment bilaterally with extension upto bilateral cardiophrenic and anterior costophrenic angles. CT-guided biopsy was consistent with thymolipoma which was surgically resected.

Thymolipomas are rare, slow-growing anterior mediastinal tumors with an annual incidence of 2 to 9 percent.1, 2 The diagnosis of thymolipoma can be challenging, as it is difficult to differentiate mass arising from thymus or other anterior mediastinal structures on imaging. In the present case, anticipated challenges are highlighted and the meticulous planning to overcome them are discussed.

A 45 years old male patient with, BMI of 28 was admitted with a large anterior mediastinal mass in the cardiothoracic surgery department for a definitive cure. He had symptoms of breathlessness and cough from last three months and were gradually progressing in severity. Earlier he could lie down supine and in lateral decubitus position but with increasing severity of symptoms he was comfortable only in the prop up posture. He also complained of generalized fatigue and nonspecific chest pain. The patient was a known diabetic, controlled on oral hypoglycemic medications, and also had a history of ischemic stroke one year back, for which patient was prescribed oral aspirin 75mg once a day. On examination, his pulse rate was 112 beats per minute, blood pressure recorded was 150/80 mmHg in the right arm in the supine position, respiratory rate was 32 breaths per minute and jugular venous pressure was raised. On chest auscultation bilateral rhonchi were present. Routine hematological and biochemical investigations were within normal limits. Spirometry was suggestive of moderate to severe restrictive lung disease.

On cardiac evaluation, electrocardiography showed sinus tachycardia, transthoracic echocardiography revealed normal biventricular function with poor window, due to large mass and posture adopted by him. Chest X-ray PA view showed diffuse opacities in bilateral middle and lower zone with no deviation of trachea. Lateral neck X-ray revealed no airway compression. On CECT thorax, a large mass of predominantly fat attenuation was visualized in the perivascular compartment of mediastinum insinuating on both sides of the visceral compartment and extending up heart and great blood vessels and displacing the upper lobes, cardio phrenic and anterior costo-phrenic angles of both lungs. Trachea and main stem bronchi were normal in position throughout the course. MRI thorax revealed soft tissue mass posteriorly displacing and molding around the anterior cardiac surface and posteriorly causing compression. (Figure 1, Figure 2) PET-CT study ruled out any evidence of metabolically active disease in the rest of the visualized body. His pulmonary function tests revealed severe restrictive lung disease with a forced vital capacity (FVC) of 1.71 L and a forced expiratory volume (FEV1) of 1.18 L. Lung biopsy was inconclusive. The presence of other systemic conditions like myasthenia gravis, aplastic anemia, and neuroendocrine involvement was ruled out.

The patient was transferred to the operation table with oxygen supplementation through nasal prongs in the prop-up position. Standard ASA monitoring was instituted with a multipara monitor. 16G intra-venous cannula was secured in the right forearm and 22G arterial catheter was inserted in the left radial artery under local anesthesia. The baseline heart rate was 92bpm and blood pressure recorded was140/80 mmHg. Femoral site was prepared, in case the patient required emergency cardio-pulmonary bypass in view of airway collapse and CICV (can’t intubate, can’t ventilate) situation. Cardio-pulmonary bypass team was ready with the perfusion pump fully prepared. Inj.fentanyl 100 µg was given intravenously and inhalational induction was done with Sevoflurane 8% in 100% oxygen at 8L/min. fresh gas flow. Following the loss of consciousness, ventilation was assisted manually and tracheal intubation was achieved with McGrath video-laryngoscope using flexo-metallic tube sized 8.0. Inj. Rocuronium 50mg was administered intravenously after securing and confirming endo-tracheal tube position. Mechanical ventilation was instituted with peak airway pressures of 18mmHg. A triple lumen central venous catheter was secured in the right internal jugular vein. ASA monitoring included ECG, SpO2, invasive BP, CVP, temperature, capnography, and urine output monitoring continuously during surgery. Anesthesia was maintained with Sevoflurane 1-2% in 50% nitrous/oxygen mixture, intermittent fentanyl, and muscle relaxant boluses as per neuromuscular monitoring.

MRI-showing no compression in airway 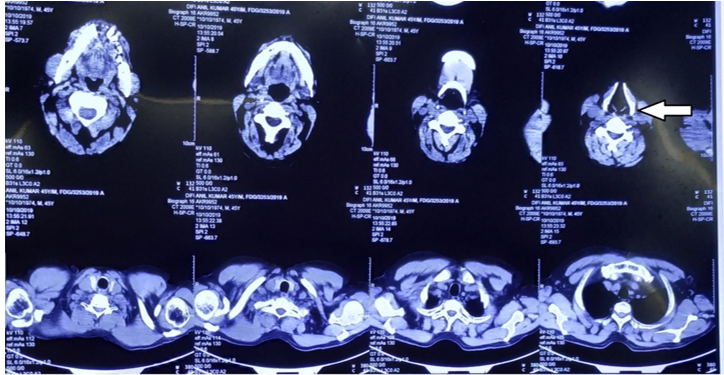 Sternotomy was done using oscillating saw and a huge mass could be seen that was fixed but not compressing the underlying structures. The mass was removed after careful dissection and meticulous hemostasis. (Figure 3) The intraoperative course was uneventful. Total blood loss was approximately 500-1000ml. Crystalloids were administered accordingly and there was no requirement of transfusion of blood and blood products intra-operatively. The patient was shifted to ICU on ventilator support. 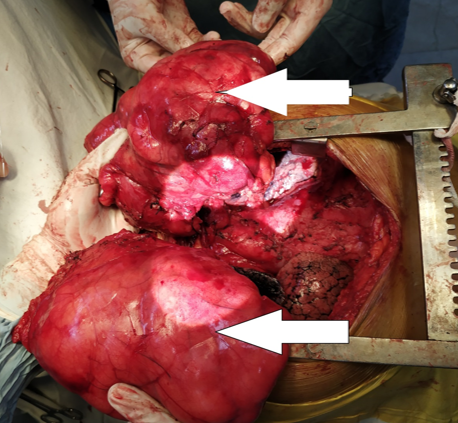 Peri-operative anaesthetic management of mediastinal masses is usually challenging owing to complications attributable to compression of the surrounding vital structures. Usually anterior mediastinal masses include thymoma, retro-sternal thyroid, teratoma, lymphoma, lipoma etc. The term thymolipoma was proposed by Hall in 1948 for tumors of the mediastinum constituting both fat and thymus tissue.3 In this case, the tumor was huge and occupied almost the whole of the mediastinum. Despite the large size of the mass, the patient could tolerate supine posture, though, for a short duration. These findings excluding the likelihood of severe airway compression, and was subsequently confirmed during investigative workup.

General anesthesia for median sternotomy is associated with many hazards, and is well documented in the literature.4 The factors attributable to this increased risk are reduced functional residual capacity (FRC) owing to increased abdominal muscle tone, decreased tone of inspiratory muscles,5 practically minimal transpleural pressure gradient because of decreased diaphragmatic excursion, enhanced tendency of airway compression owing to relaxation of the tracheobronchial tree under anaesthesia4, 6 and supine position leading to mass effect on underlying structures and increased central blood volume. Therefore, various factors come into play and definitely pre-dispose the patient to increased chances of airway compression.

Pre-operatively, the patients with anterior mediastinal masses may develop airway compression, superior vena cava obstruction or cardiac compromise caused by extrinsic compression. On anaesthesia induction, there are increased chances of catastrophic major airway collapse. Therefore, we planned to preserve spontaneous ventilation using inhalational induction technique while manually assisting breaths with small tidal volumes to ensure oxygenation. The head end of the table was elevated to reduce cephalad displacement of the diaphragm and the associated reduction in functional residual capacity. Administration of neuro-muscular blockers leads to relaxation of bronchial smooth muscles and may further predispose airway compression which was already narrowed by direct external pressure of the mass.3 Coupled with this, the decreased tone of chest wall adds to the risk of airway collapse.7 Hence, muscle relaxant was administered once the airway was secured with an endotracheal tube and position confirmed with square wave capnography.

Occasionally, there are instances when life-threatening airway compression occurs (can’t ventilate). This usually responds to either repositioning of the patient or rigid bronchoscopy and ventilation distal to the obstruction. In extremely high risk CICO (can’t intubate can’t oxygenate) cases, quick cardio-pulmonary bypass (CPB) using femoro-femoral bypass is a viable option.8 In our case, though the patient was symptomatic, still there was no major airway compression or tracheal deviation on the chest X ray and CT chest. However, such huge masses may lead to tracheomalacia by prolonged compression and pressure effect,8 and may complicate the postoperative management while weaning from the ventilator.

Cardio-vascular issues anticipated in such a massive tumor include direct compression over the heart, compression of the adjacent vascular structures especially, pulmonary artery and pericardial effusion. In large masses, the diastolic filling may be impaired and the patients may present with rhythm disturbances and syncopal attacks.8 In cases with pericardial effusion, the outcomes reported are generally not favorable during the intraoperative period.6 When the pulmonary artery is compressed, it may obstruct right ventricular outflow and thereby, reduced pulmonary blood flow and diminished return to the left atrium. Anesthetic agents also reduce cardiac contractility, decrease pre-load and hence, diminish cardiac output. Therefore, intensive monitoring, strict vigilance and ready inotropic support are mandatory. In cases, where there is severe cardiovascular compression after induction, the definitive therapy is immediate sternotomy and surgical elevation of the mass from the great vessels, after planned CPB.

Usually a large bore venous access (14-16G) is secured in the lower extremity and central venous access via the femoral route is established. In such cases we avoid supra-cardiac venous cannulation as there are chances of hemorrhage, embolization, erroneous pressure reading in view of raised intra-thoracic pressures and unpredictable drug effect.9

The challenges for peri-operative management of mediastinal masses include a thorough pre-operative evaluation, meticulous planning and preparation prior to surgery. The emphasis is to anticipate complications, and gearing up all gadgets to manage them. Preparation of difficult airway cart, fibre-optic aids for intubation, jet ventilation, emergency drugs and preparation for emergency cardio-pulmonary bypass are of paramount importance. Spontaneous ventilation should be preserved during induction to preclude the possibility of airway collapse under influence of relaxants, especially when dealing with the non-compressible masses. Femoro-femoral bypass is preferred option whenever there is pre-existing severe tracheobronchial and superior vena cava compression. Additionally, reinforced flexible endotracheal tubes help in avoiding near fatal airway obstructions intra- operatively. Last but not the least, asymptomaticity in the pre-operative period in no way precludes the possibility of disastrous eventualities like airway compromise or cardiopulmonary arrest intra-operatively.

Written informed consent was obtained from the patient for publication of this case report and accompanying images.