Deshpande, Salunke, Singh, and Bhojane: Anaesthesia management of a case of huge neck mass due to cervical spine chondrosarcoma with distorted anatomy

Chondrosarcoma is the tumor which affects bone and soft tissue with only 2% spinal involvement. Anesthetic management becomes challenging in patients with cervical chondrosarcoma. Here, we are presenting a case of huge neck mass due to cervical spine chondrosarcoma in 70 year old male hypertensive patient. The patient has distorted anatomy with mucosal edema with left tracheal deviation and compression from right side. Awake Nasal Fiberoptic intubation was done with cuffed ETT no 8. The neck mass was removed and Anterior Cervical Discectomy and Fusion (ACDF) with bone grafting. The case was managed with adequate analgesia, replacement of fluids and Blood and Blood products. Considering complex cervical spine surgery and airway edema the patient was shifted to Surgical Intensive Care Unit (ICU) for elective ventilation and advanced monitoring. After serial ABG and proper weaning the patient was extubated next morning smoothly.

Chondrosarcoma is the tumor which affects bone and soft tissue where vertebral body 5% and 2 -12% of spinal involvement occurs.1 Recurrence is reported at rate higher (up to 100%) when inadequate margins have been accomplished during the operation.

Here, we are presenting a case of 70 year old male huge right sided neck mass measuring of 11.9*12.13*14.13 cm3 arising from C5-C6 with distorted anatomy with deviation of the trachea towards the left in a known case of Hypertension. It was challenging for the anesthetist and surgeon in view of difficult airway, intraoperative blood loss and hemodynamic instability as mass was arising from cervical spine area in Computed tomographs (CT).2

70 year old male (68kg) presented with gradually increasing right sided neck mass since 6 years. There was no History of dysphagia, cough, dyspnea, hoarseness of voice, nausea or vomiting. The patient was a known case of Hypertension since 2 years on T Atenolol 25mg BD.

On examination, the patient pulse was around 54/min, regular with rest of the vitals normal. A firm hard, non tender, immobile swelling of size 15*12 cm2 on the right side of neck was present Figure 1. Mouth opening was adequate with Mallampati Classification Class II but the neck flexion and extension were restricted due to the huge mass. His systemic examination were normal with Waddling gait with power being 5/5 in all four limbs. 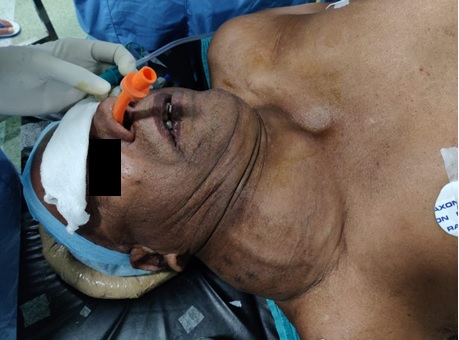 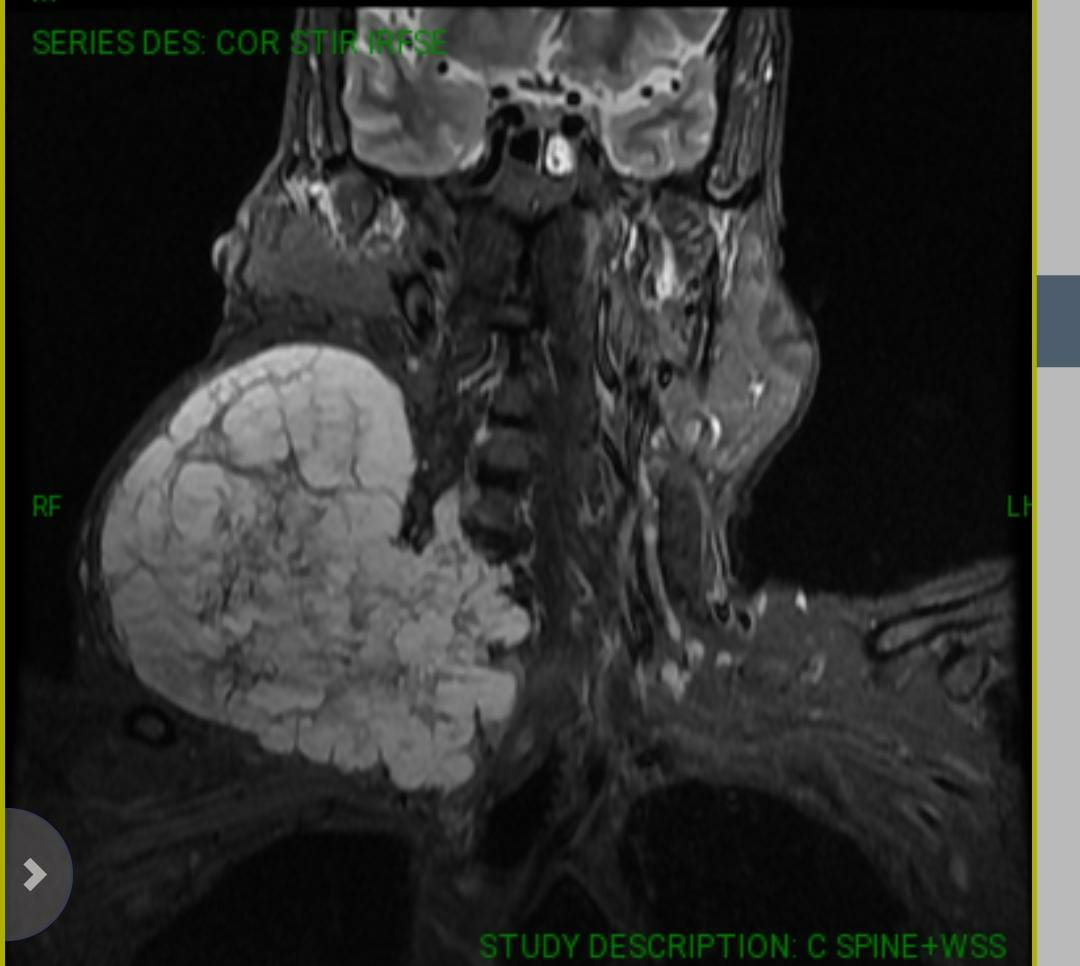 Comprehensive contingency plan was developed as it was difficult approach for both the anesthetist and surgeon. Anatomical distortion made the airway difficult and challenging to the anesthetist and bone involvement with extension to the vascular bed for the surgeon. A written informed high risk anesthetic consent for difficult airway, blood loss and postoperative mechanical ventilation in ICU was taken. Psychological preparation was done which involved procedural information, postoperative pain and length of postoperative stay in the Intensive Care Unit (ICU). Preoperative fasting hours were confirmed, ICU bed with ventilatory support was kept ready, adequate blood and blood products were reserved. Preoperatively, nebulization with Lignocaine 4% 2cc for awake fiberoptic intubation (FOI) and premedication with Inj Hydrocortisone 100mg and Inj Dexamethasone 8mg was done.

Proper positioning for FOI with right tilt to the table was given. Superior laryngeal never block with assistance was given with Lignocaine 2% 2cc bilateral and transtracheal block with Lignocaine 2% 2cc. After placement of xylometazoline drops, nasal passages were lubricated. The nasal patency was confirmed and continuous oxygen was going on through contralateral nostril with Bains circuit connected to nasal airway. Nasal FOI was guided and on visualization of glottic opening 2 puffs of 10% Lignocaine were given and ETT no 8 cuffed guided through it. During FOI we could see the mucosal edema on lateral sides, distorted anatomy and deviation of trachea to the left Figure 3. No deterioration in hemodynamics, saturation or difficulty in delivering Positive pressure ventilation was seen on giving Inj Propofol 100m, air entry was bilaterally equal on auscultation and confirmed with Etco2, so muscle relaxant Inj Vecuronium 5mg was given. Ryle’s tube no 14 and temperature probe was inserted. Throat packing was done. The patient was stable during the procedure. (Figure 4) 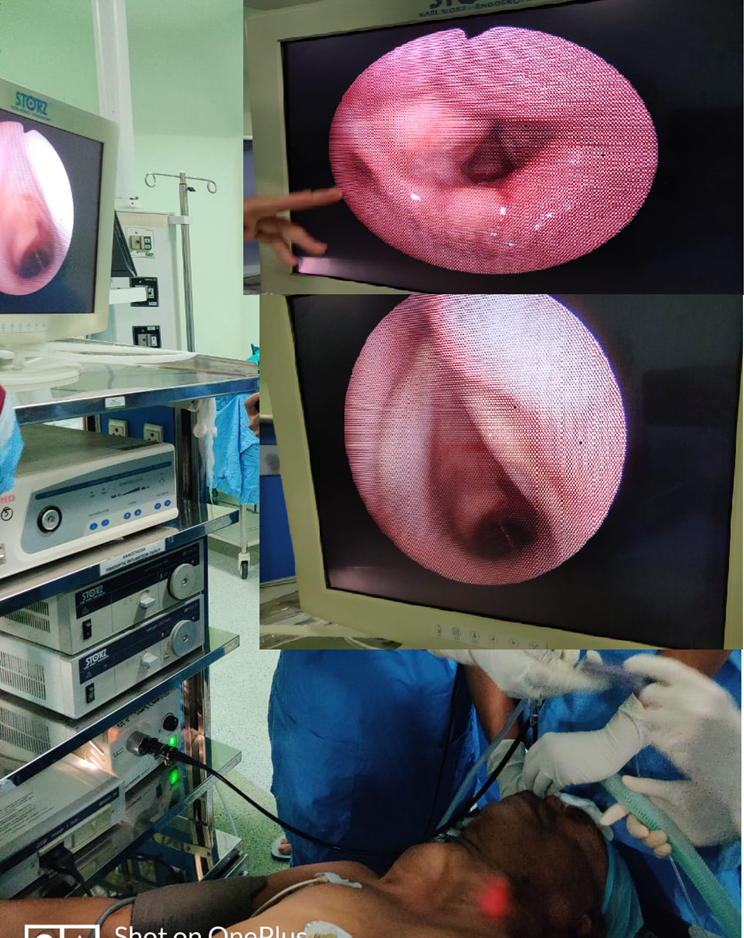 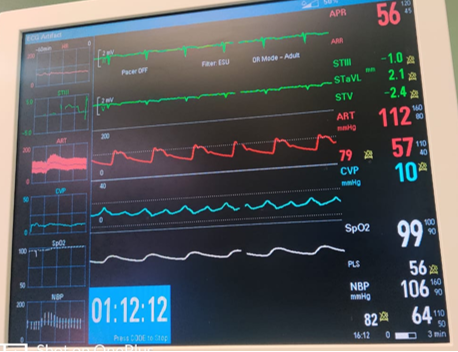 Intraoperative patient had one episode of bradycardia (HR < 20% baseline) which was treated with anticholinergic Inj Glycopyrrolate 0.2mg IV. The intraoperative blood loss was replaced with two Packed Cell Volume (PCV) and two Fresh Frozen Plasma (FFP). The serum calcium was 8.2 which was slightly on lower side and considering the reduction in its level after blood transfusion we gave Inj Calcium gluconate 10% 10ml over 10 mins.4 Mid Blood transfusion Inj Lasix 10mg was given.

The surgeon excised the tumor, then the spine surgeon took over and did Anterior Cervical Discectomy and Fusion (ACDF) with bone grafting. Bone graft was taken from right iliac crest and plating was done. The total blood loss was approximately 1000ml, Urine output-600ml, replacement was done with 4 crystalloids, 1 colloid, 2 PCV and 1 FFP.

Considering the patient had airway edema after extensive surgery, joint decision was taken by surgeon and anesthetist to ventilate the patient postoperatively in Surgical ICU. Postoperative all labs were sent and ABG was done. Adequate analgesia was maintained postoperatively with Infusion of Inj. Fentanyl 0.5mcg/kg/hr and Inj Midazolam 0.03 mg/kg/hr. Postoperative Hemoglobin was 11 and serum calcium 7.6, which was corrected. After serial ABG and CPAP and T piece trial the patient was extubated smoothly on next day morning.

It was huge neck mass with anatomical distortion with tracheal deviation and restricted neck movement, airway management was difficult and challenging for the anesthetist. After discussing various techniques of difficult airway management like noninvasive McCoy laryngoscope,5 Video laryngoscopy,6 Airtraq video laryngoscope7 (difficulty in negotiation), Fiberoptic intubation8 (FOI) and invasive like retrograde intubation9 (trauma, difficulty in retrieval of catheter), cricothyrotomy and percutaneous dilatational tracheotomy10 we decided to go for FOI.

FOI offers several advantages such as it maintains airway muscle tone and spontaneous ventilation, consideration of alternative if technique fails, obviates alignment of oro-pharyngeal-laryngeal axis.8 Correct positioning of the ETT can be confirmed with FOI, especially in distorted airway anatomy. So we choose Awake Nasal fiberoptic intubation.

Stephen et al.8 has stated that FOI is an effective technique for establishing airway access in patients with both anticipated and unanticipated difficult airway.

The neck mass being long standing since 6 years, there were chances of having tracheomalacia, FOI has added advantage as it being the diagnostic test for tracheomalacia.11

Mondal et al. has studied that dexmedetomidine and fentanyl provides better intubation conditions, sedation along with hemodynamic stability and less desaturation during Awake Fiberoptic intubation (AFOI) (dexmedetomidine>fentanyl).12 As our patient was Hypertensive on beta blockers with heart rate on lower side we preferred Fentanyl, being cardiostable and potent analgesic agent.

Position changes help to relieve the mass effect on tumors.15 Induction was done on table, which enabled immediate changes in patient’s position. The right tilt was given during FOI to decrease tumor related compression pressure.

As CT scan showed narrowing of trachea with the narrowest being at C5 and due to distorted anatomy and unanticipated further narrowing we decided to go for smaller size tube of no 8. Shigeki et al. had concluded that Tracheal diameter measured by X-ray (TD-XP) and Tracheal diameter measured by Computed Tomography (TD-CT) does not correlate with age, height, weight, or BMI.16 So we included even smaller size tubes in the preparation. Throughout the procedure of FOI, our patient was cooperative and maintained the saturation which was the combined effects of proper preoperative evaluation and planning.

Comprehensive preoperative anaesthesia evaluation including image studies, acquisition of skills in the FOI with proper positioning with right tilt and multidisciplinary team approach necessitates in successful management of case of huge neck mass. Besides, the difficult airway scenario, anticipating massive blood loss, intraoperative hemodynamic monitoring and postoperative care was also important in this patient for safer and affirmative outcome.