Introduction: Pain is important morbidity following percutaneous nephrolithotomy (PNL). Various adjunctive procedures such as intercostals nerve block (ICNB) have been described to reduce post-operative pain. The aim of this review was to determine the analgesic efficacy of ICNB in PNL patients.

For renal stones greater than 2 cm percutaneous nephrolithotomy (PNL) is the accepted standard of care with reasonably acceptable complication rates.1 PNL entails percutaneous access tract traversing skin, subcutaneous tissues, peri-renal tissues and renal parenchyma due to which pain can be important morbidity following surgery. Numerous surgical advances in terms so smaller access size have been made to reduce the postoperative pain, namely mini PNL, ultra mini PNL2, 3, 4, 5 and tubeless PNL6 Infiltration of local anesthetic agents by various routes such as peritubal, paravertebral7, 8, 9, 10 and intercostal nerve block (ICNB)11, 12, 13 has found some success in terms of reducing analgesic requirements. Intercostal nerve block (ICNB) is a relatively newer technique that has been tried in PNL to reduce post-operative pain and analgesic requirements. The procedure is performed under fluoroscopy guidance with an anesthetic agent infiltrated in the lower intercostal spaces around 5 cm lateral to sacro-spinalis muscle. Theoretically, there is a possibility of pleural injury during the procedure. Analgesic efficacy of various other techniques such as peritubal block14 and paravertebral15 block has been the subject of two meta-analyses, and both techniques have shown reduced analgesic requirements. There have been multiple randomized controlled trials describing the safety and efficacy of ICNB11, 12, 13 in PNL patients but no systematic review has been conducted to our knowledge. The primary aim of this study was to compare the analgesic efficacy of ICNB compared to control or other available techniques such peritubal block or paravertebral block.

With this review, we intended to perform systematic review and meta-analysis to compare analgesic efficacy of intercostal nerve block (ICNB) as an adjunctive analgesic modality in patients who underwent PNL for renal stone diseases. PRISMA (Preferred reporting Items for Systematic reviews and Meta-analysis) Guidelines were followed while conducting this review.16

Two review authors (SP and GS) independently conducted the database search to identify relevant publications describing use of ICNB in patients undergoing PNL. We used Pubmed, Scopus, CENTRAL, Embase and Web of science databases to carry out the literature search from their date of inception till last search conducted on 19 March 2020. Literature search was limited to English language only. Third author (SK) help was sought in case of discrepancy in the inclusion or exclusion of any article during different stages of the review.

We used the following keywords [PNL OR PCNL OR Percutaneous nephrolithotomy AND ICNB OR intercostals nerve block OR intercostal block]. The last literature search was conducted on 19th March 2020. The search strategy used for the Pubmed database is provided in the supplementary file.

Initially, two review authors (SP and GS) independently reviewed the titles and abstracts of the relevant articles obtained from literature search. Articles containing data on use of ICNB in patients undergoing PCNL were selected for full-text review. Based on inclusion and exclusion criteria, studies were selected for eligibility for full article review. We included randomized controlled trials (RCT) only. For inclusion a study should describe use of ICNB in patients undergoing PNL in comparison to placebo, no treatment or any other modality. Study should contain data on at least one of the following variables i.e. amount of analgesic use, time to analgesic use or visual analog scale. Exclusion criteria include non randomized studies, case series, case reports, reviews, conference abstracts and editorials Any discrepancy upon inclusion or exclusion of study was sort out by arbitration among the three authors [SP, GS & SK].

Primary outcome measure used for this study was amount of analgesic required in ICNB as compared to control or placebo or other adjunctive analgesic modality. We also compared visual analogue scale (VAS) and dynamic VAS (DVAS) between various modalities at 24 hours. Since data on complications was not uniformly available across the studies, we gave a descriptive review for the same.

Data was extracted independently by two reviewers (SP and GS) from the studies included in final analysis. All the continuous data obtained was used for quantitative data synthesis and expressed in terms of mean and standard deviation. Data was entered into a data extraction form including first author name, year of publication, country of origin, type of study, inclusion and exclusion criteria, treatment groups, age, sex, body mass index (BMI), stone burden, operative time and complications. Following completion of data extraction, data was compared for consistency and any discrepancy was resolved by reassessing the data and arbitration by the third author (SK).

For quality assessment Cochrane tool for risk assessment was used22. This tool examines a study across seven domains (sequence generation, allocation concealment, blinding of participants and personnel, blinding of outcome assessment, incomplete outcome data, selective outcome reports and other source of bias) and graded as ‘high risk of bias’, ‘low risk of bias’ or ‘unclear risk of bias’ across these domains. Quality assessment was done by two review authors (SP and GS) independently. Any discrepancy was settled after arbitration with other authors (SK and TY).

Mean and standard deviation was estimated from the median and range using the formula reported by Hozo et al.17 wherever they were missing. Data were calculated as mean difference (MD) together with their 95% confidence interval (95% CI). For dichotomous variables, statistical heterogeneity was tested using chi2 and I2 tests. A p value < 0.10 was used to indicate heterogeneity and in the absence of statistical heterogeneity, the fixed-effects model (Mantel-Haenszel method) was used. In the presence of statistically significant heterogeneity random-effects model was used. A p-value of <0.05 indicates statistical significance. Statistical analysis was performed using the Cochrane collaboration review manager software RevMan 5.2TM (the Cochrane Collaboration, Copenhagen, Denmark).

On the included studies in this review, randomization technique was adequately described in all the studies except Honey et al. Allocation concealment in either of the intervention groups was adequately blinded in only three studies. Adequate double blinding was done by all except Singh et al.11 Since many items of post-operative assessment are dependent upon the investigator such as VAS and DVAS. It is imperative that the investigator assessing this parameter should be blinded. However, this issue of detection bias was adequately addressed in two studies (Choi et al19 and Ozkan et al13) only and thus, other studies were at high risk of detection bias. All the studies were at low risk for attrition and reporting bias (Figure 2).

Choi et al. compared DVAS and VAS at 2hr, 8hr, 24 hr and discharge for all the three treatment groups i.e. ICNB, NTI and control) and found no difference between ICNB and control at any point of time. Ozkan et al noted VAS and DVAS values were significantly lower for ICNB group as compared to placebo group (10min, 20min, 1hr, 4hr, 8 hr, 12 hr and 24 hr). Singh et al. reported lower VAS scores at 24 and 48 hrs in PTI group compared to ICNB. Similarly Jonnavithula et al noted significantly lower VAS and DVAS scores at 4,8,12 and 20 hrs for PTI group but this difference was not seen at 24 hours.

Complications between were compared in 4 RCTs only. None of the studies reported any complication such as pneumothorax secondary to ICNB In terms of overall complications rates, only Ozkan et al. reported significantly lower complication rate in ICNB group than in the control group (p=0.04). However, most common complication reported by patients in control group was nausea and vomiting only. Rest of the studies demonstrated no significant difference in the three subgroups of patients. Honey et al. reported small pleural effusions in 2(6.7%) vs 3(9.1%) patients in ICNB and placebo groups respectively. 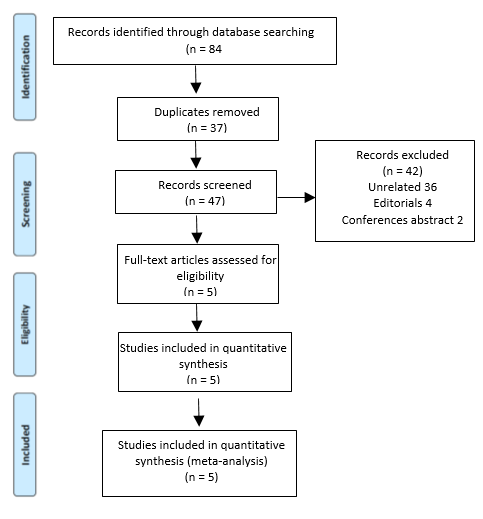 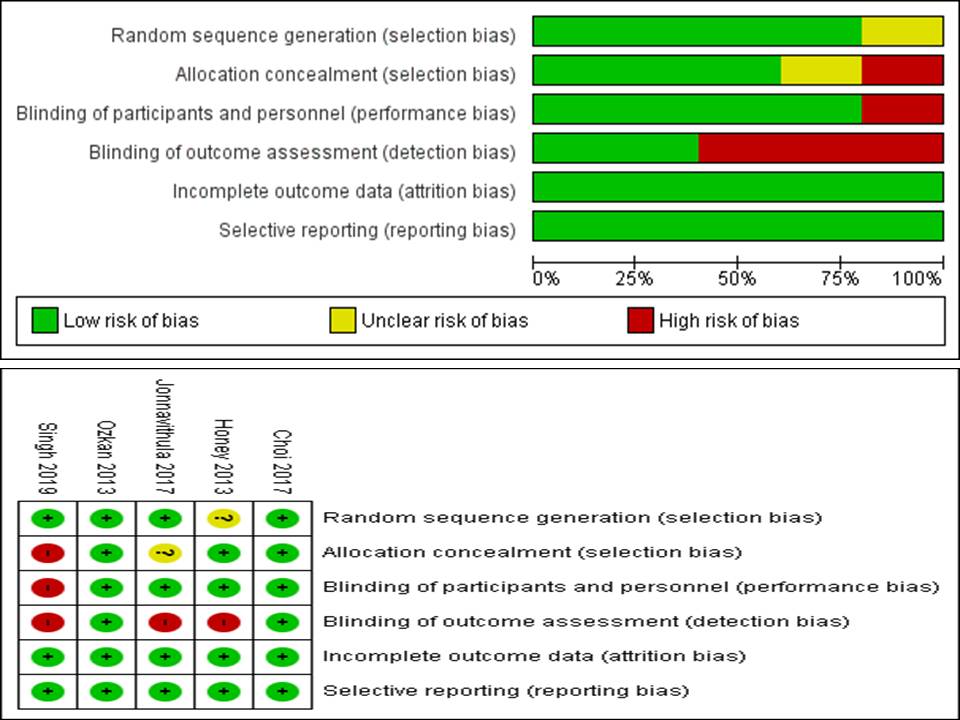 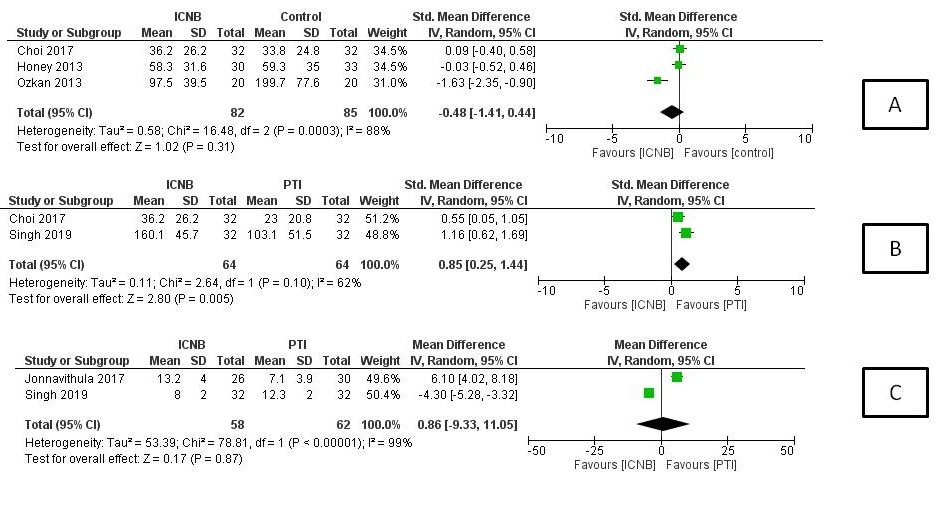 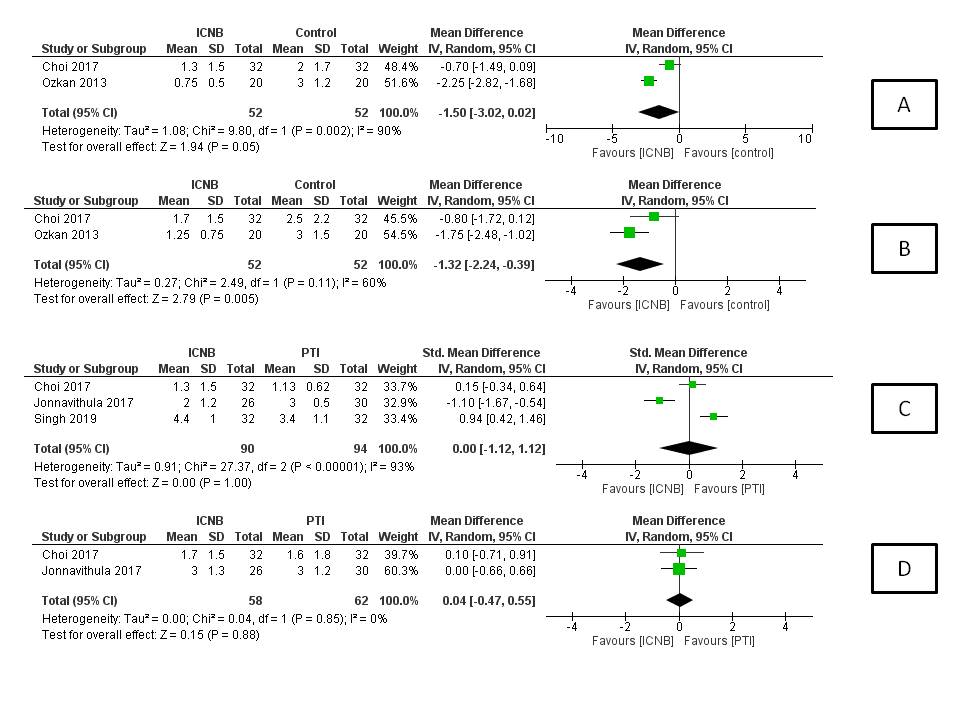 Characteristics of the studies included in this review

For renal stone diseases, PNL has become the most commonly performed surgery and has been recommended by European and American guidelines as standard of care for stone larger than 2 cm.20, 21 Pain is an important morbidity following PNL that can lead to increased analgesic demand, decreased respiratory effort, increased hospital stay, reduced patient satisfaction and increased health care cost. Both surgical as well as anaesthetic advances have been made to reduce the pain associated with the procedure. Various anaesthetic procedures include relatively simpler procedures such as peritubal or nephrostomy tract infiltration and some other complicated procedures requiring skilled anesthetist such as ICNB, paravertebral and erector spinae blocks.22, 23, 24 In this review, 5 RCT’s were included and most of the studies except by Ozkan and Choi et al. were at high risk of bias for one of the domain of risk of bias score. Overall quality of the studies in this review is of low to moderate quality. This is the first review article on the topic to best of our knowledge.

Honey et al. reported small pleural effusions in 2(6.7%) vs. 3(9.1%) in ICNB and placebo groups respectively however none of them were attributed to ICNB. Similarly Ozkan et al. and Choi et al. did not report any complications secondary to the ICNB. Thus, the theoretical possibility of pneumothorax hasn’t been realised practically if the procedure is performed by experienced anaesthetist. Considering the results of this study ICNB appears to be a safe procedure in experienced hands however it hasn’t shown superiority over control group in terms of analgesic efficacy and reduction in pain scores. Furthermore, a simple to perform procedure such as peritubal block has shown better analgesic efficacy than ICNB.

There are many limitations of this meta-analysis, firstly only handful numbers of studies were included in this meta-analysis. Quality of studies included in this meta-analysis was only low to moderate. Literature search for this review was limited to English language only. There was significant heterogeneity for each of the comparison. Heterogeneity can be attributed to different local anaesthetic used such as Choi et al and Jonnavithula et al. used ropivacaine and others used bupivacaine. Also control groups was heterogeneous, Honey et al gave saline injection in the intercostal space as placebo whereas others did not give any treatment. Analgesic used for post-operative pain relief was also variable. Although the study and control groups compared well for baseline parameters but surgical technique, puncture and dilatation technique was not described in all but two studies by Choi et al. and Honey et al. Other confounding factors to pain such as size of the nephrostomy tract, post operative nephrostomy tube and number of supra or infra-costal punctures were not adequately noted in most of the studies (Table 1).

Intercostal nerve block in terms of analgesic requirement appears to be inferior to peritubal block and no better than control group. Also mean pain scores for ICNB are similar to control group and peritubal block. However, there are several limitations of the studies included in this review. Thus further high quality randomised studies are needed comparing ICNB with placebo and adequately describing the surgical technique, access size and site of puncture.

SP Hozo B Djulbegovic I Hozo Estimating the mean and variance from the median, range, and the size of a sampleBMC Med Res Methodol2005513