Rathore, Chaudhary, Kumar, and Salhotra: Nalbuphine versus dexmedetomidine for attenuation of haemodynamic response to laryngoscopy and intubation: A randomised double blind comparative study

Nalbuphine versus dexmedetomidine for attenuation of haemodynamic response to laryngoscopy and intubation: A randomised double blind comparative study

Conclusion: Dexmedetomidine was found to be more effective in attenuating haemodynamic response to laryngoscopy and intubation as compared to nalbuphine.

Laryngoscopy and endotracheal intubation is associated with haemodynamic changes which can be fatal in patients with hypertension, cardiac dysfunction, coronary artery disease and cerebrovascular disease.1 It increases heart rate and blood pressure which can precipitate arrhythmias, myocardial infarction, left ventricular failure, pulmonary oedema and cerebral haemorrhage.2, 3, 4, 5

Various techniques and drugs have been used to attenuate this haemodynamic response but no ideal agent has been found till date.6, 7, 8

Recently dexmedetomidine and nalbuphine have been studied for attenuation of this haemodynamic response and have been found to be effective.9, 10, 11, 12, 13 None of the studies have compared these two drugs so this study was designed to compare nalbuphine and dexmedetomidine for attenuation of haemodynamic responses to laryngoscopy and endotracheal intubation. The primary objective of our study was to see changes in heart rate (HR) and Systolic Blood Pressure (SBP) while Diastolic Blood Pressure (DBP), Mean Arterial Pressure (MAP) and side effects were the secondary objectives.

The present study was conducted from November 2016 to April 2018 after obtaining approval from Institutional Ethical Committee-HR. The protocol was registered with ctri.nic.in.

Written informed consent was obtained from all participants. It was a randomised, double blind, comparative study including 80 American Society of Anesthesiologist (ASA) grade I and II patients of either gender, between 18-60 years of age, 40-70 kg body weight, with Modified Mallampati Grade I and II airway, undergoing elective surgery under general anaesthesia and requiring endotracheal intubation.

Patients refusing consent or having history of allergy to opioids, anticipated difficult intubation or sleep apnea, history of cardiovascular, cerebral, renal, hepatic, bronchospastic or endocrine disease or psychiatric disorder, patients on anti hypertensives, hypnotic or narcotic analgesics, or full stomach patients, pregnant and lactating females or patients in whom laryngoscopy time was >30 sec or >1 attempt were excluded from the study.

A total of 80 patients were randomly allocated to one of the two groups using computer generated random number table. Group N (n=40) received 0.2 mg/kg of nalbuphine and group D (n=40) received 1 µg/kg of dexmedetomidine. Both drugs were diluted to 10 ml with 0.9% saline solution and administered over a period of 10 min. Test drug was prepared by an anaesthesiologist not involved in the further conduct of study, keeping both the observer and the patient blinded about the nature of drug. A detailed pre-anaesthetic evaluation of each case was done a day before surgery. All patients were kept nil per orally 8 hours prior to surgery. All patients received tablet alprazolam 0.25 mg, night before and in the morning of surgery. Written informed consent was taken. On arrival in the operation theatre (OT), standard monitors were attached with the facility of ECG, non invasive blood pressure, SpO2. Baseline readings of heart rate (HR), systolic (SBP), diastolic (DBP) and mean (MAP) blood pressure were noted. Average of three readings of blood pressure was taken as baseline.

An intravenous line was secured and study drug was administered over 10 minutes. Patients were preoxygenated with 100% oxygen for 3 min following which fentanyl citrate 1 µg/kg i.v. and propofol 2-2.5 mg/kg i.v. was given till loss of response to verbal commands. Bag and mask ventilation was confirmed and vecuronium bromide 0.1 mg/kg i.v. was given to facilitate muscle relaxation before intubation. Bag and mask ventilation was continued with N2O in O2 mixture (66%:33%) with isoflurane between 1-2 Minimum Alveolar Concentration (MAC) for 3 min.

Following this, laryngoscopy and endotracheal intubation was done by an anaesthesiologist having atleast 3 years of experience in laryngoscopy and intubation with Macintosh blade. After laryngoscopy, trachea was intubated with an appropriately sized endotracheal tube. Anaesthesia was maintained with N2O in O2 mixture (66%:33%) with isoflurane between 1-2 MAC. Surgical incision was given at least 15 min after intubation. HR, SBP, DBP and MAP were recorded at following time points: Baseline in OT (Tb, an average of three readings taken 1 min apart), after test drug administration over 10 min (Td), after propofol administration (Tp), 3 min after vecuronium administration (Tv), at the time of intubation (T0), 1, 3, 5, 10, 15 min after endotracheal intubation (T1, T3, T5, T10, T15) and thereafter, every 15 min till the end of surgery.

The demographic profile of patients including age, weight, gender, ASA grade, and Mallampatti class was comparable among the two groups (Table 1). 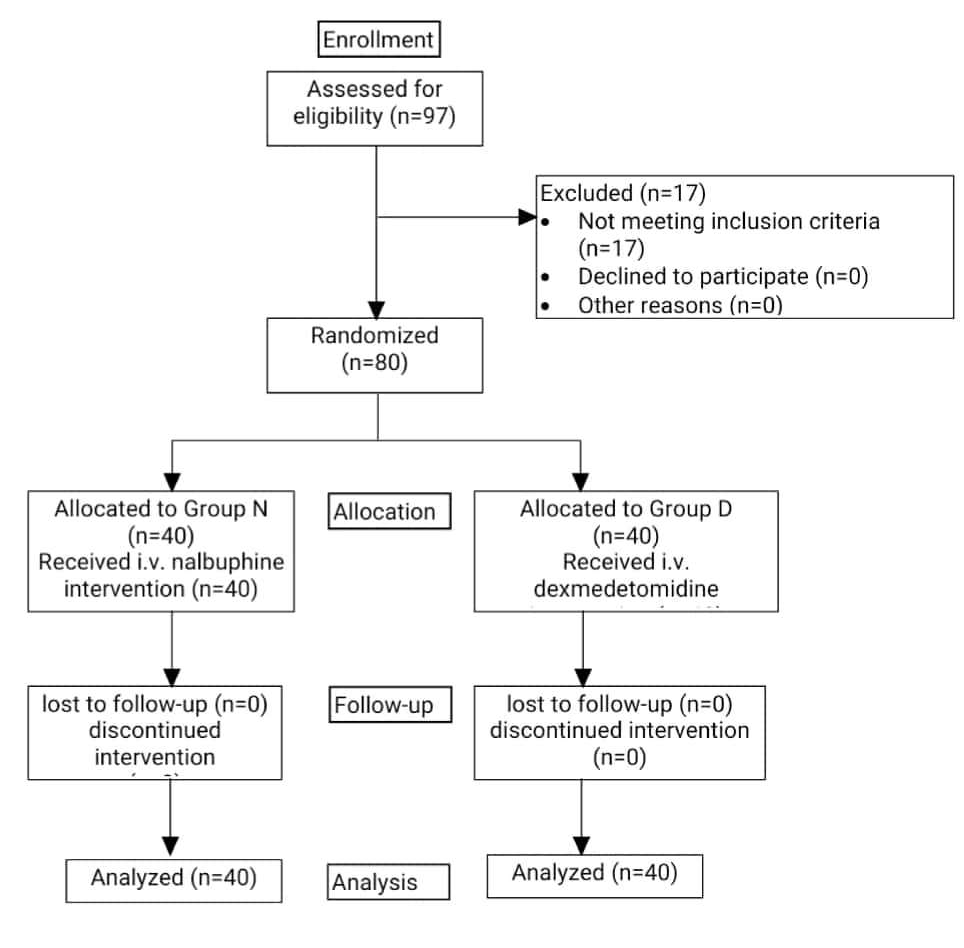 The baseline vital parameters (mean HR, SBP, DBP and MAP) were also comparable among the two groups. There was significant decrease in mean HR in group D as compared to group N, after administration of test drug and 1 min after intubation. Both group N and group D showed no significant increase in mean HR at any time interval when compared to baseline values (Table 2).

Side effects of the study drugs 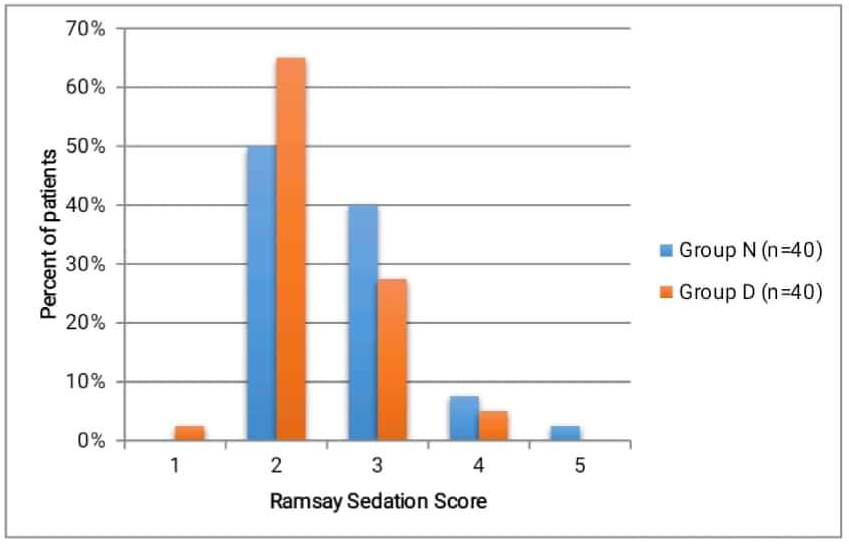 Endotracheal intubation is considered to be the gold standard for airway management. However, both laryngoscopy and endotracheal intubation are noxious stimuli to the airway resulting in marked sympathetic response manifested in the form of tachycardia and hypertension.5 These haemodynamic changes can prove disastrous in patients with hypertension, cardiac dysfunction, coronary artery diseases and cerebrovascular diseases.1 It may result in development of arrhythmias, angina, myocardial infarction, left ventricular failure, pulmonary oedema, acute cerebral oedema, herniation of brain tissue and cerebral haemorrhage.2, 3, 4

Various classes of intravenous drugs have been used to blunt this reflex sympathetic response.7, 8, 9, 10, 11, 12, 13 Dexmedetomidine is a potent, highly selective α2 agonist. Numerous studies have shown that dexmedetomidine is effective in blunting stress response to laryngoscopy and intubation.9, 10, 14, 15, 16, 17, 18 Previously used doses of dexmedetomidine studied for blunting stress response range from 0.25-1 µg/kg infused over 10 to 20 min before induction.10, 14, 15 In a dose of 1 µg/kg it has been found to be effective without additional side effects, hence we used the same dose i.e. 1 µg/kg dexmedetomidine diluted to 10 ml over 10 min.14, 16, 17, 18

Nalbuphine is a semisynthetic agonist-antagonist opioid. It has been studied for attenuation of intubation response because of its cardiostable properties and has been found to be effective.11, 12, 13 Most of the studies have used nalbuphine in a dose of 0.2mg/kg, given 5 to 15 min before induction for attenuation of stress response.11, 12, 13 In the present study we used the same dose i.e. 0.2mg/kg nalbuphine diluted to 10 ml over 10 min.

In this study we found that the demographic profile and baseline vital parameters (mean HR, SBP, DBP and MAP) were comparable among the two groups.

In our study, the mean SBP, DBP and MAP were comparable among the two study groups at various time intervals. Mean SBP, DBP, MAP decreased significantly at the time of propofol administration in both the groups which can be attributed to combined effect of test drug and induction agent. Buchh et al also observed a significant decrease in SBP, DBP and MAP after administration of nalbuphine or fentanyl and further decrease after induction with propofol.20 Vaswani et al reported decrease in SBP, DBP and MAP below baseline after dexmedetomidine infusion which further decreased after thiopentone induction.19

Our study has a few limitations. We included only normotensive patients and the outcomes may not reflect the effectiveness and safety in hypertensives in whom attenuation of intubation response is more crucial. We sincerely think that attenuation of haemodynamic response to endotracheal intubation is also important in normotensives. Another limitation was that measurement of invasive pressures would have helped us to understand the drugs even better. However, such measurements were not feasible at our institute.

There are no conflicts of interest.

B Sebastian AT Talikoti D Krishnamurthy Attenuation of haemodynamic responses to laryngoscopy and endotracheal intubation with intravenous dexmedetomidine: A comparison between two dosesIndian J Anaesth20176114854