Aim: The aim of the study is to compare the effectiveness and safety of cuff inflation technique over conventional method of Magill forceps for Nasotracheal intubation NTI under direct laryngoscopy.

Materials and Methods: After taking permission from institutional ethical committee, patients of 18-60 years of either sex of ASA grade I and ll were divided into groups of 40 each. In group C, cuff inflation technique and in group M, Magill forceps technique was used for navigating the endotracheal tube from oropharynx to glottic opening to achieve intubation. Parameters observed were time required for intubation, attempts of intubation, injury occurring to oropharyngeal structures during intubation and hemodynamic parameters. Cuff of endotracheal tube was assessed postoperatively for any leaks. Analysis of the data for the various parameters was done using paired t-test for intra-group comparison and student t-test for intergroup comparison and chi-square test was used for qualitative (non parametric) data.

Results: There was no significant difference in demographic parameters, time required for intubation, number of attempts for intubation and hemodynamic parameters, but trauma to oropharyngeal structures was more in group M (8/40) compared to group C (0/40). (p≤0.05) Trauma to cuff of endotracheal tube was seen in group M (1/40) while none in group C (0/40) which was statistically not significant (p≤0.05).

Conclusion: Thus, Cuff inflation technique can be used as an effective alternative to Magill forceps for oropharyngeal navigation of endotracheal tube under direct laryngoscopy guided nasotracheal intubation in patients with normal airways.

Nasotracheal intubation (NTI) appears to be useful in surgeries of mouth, pharynx, larynx and also neck.1 During NTI, once the tube is passed through the nasal cavity into the oropharynx, its misplacement can occur. It can impinge upon oesophagus, on the anterior commissure of larynx, in the valeculla or in the pyriform fossa.2 So multiple techniques are available to facilitate entry of endotracheal tube (ETT) into the larynx. Commonly Magill forceps is used to navigate the ETT from oropharynx to laryngeal inlet. Magill forceps may cause damage to the cuff of an ETT or may injure oropharyngeal mucosa, which can be easily prevented by cuff inflation technique.3 Cuff inflation technique had been suggested by Sir Gorback in 1987 for blind nasal intubation and was used clinically by Sir Van Elstraete and Sir Chung in 1993.4 In the cuff inflation technique for NTI, once the ETT passes through nostril and appears in the pharynx, the ETT cuff is then inflated with 10-15 ml of air. Inflation lifts the cuff of ETT off the posterior pharyngeal wall and thus direct the tube towards the glottis.5 So it avoids instrumentation, trauma to upper airway mucosa and ETT cuff perforation. Till date only one study is available who assessed the role of cuff inflation technique for oropharyngeal navigation of three different types of ETT under direct laryngoscopy.6 There has not been any study for comparison of both the techniques under direct laryngoscopy. Hence we undertook this study of comparison of two different techniques for oropharyngeal navigation of ETT under direct laryngoscopy for NTI.

After the approval from institutional ethical committee for human research, a single blinded randomized controlled trial was carried out. Total of 80 adult patients of either sex, between ages 18-60 years, belonging to ASA status I and II, who were scheduled for elective surgical procedures requiring Nasotracheal intubation under general anaesthesia were selected. Patients with history of upper respiratory tract infection, bleeding disorder, known airway anomaly, previous surgery in nasal cavity, nasal obstruction and Mallampati Grade III and IV were excluded from the study.

Sample size was calculated as follows:

Minimum 76 patients (38 per group) required for present study to estimate mean difference of intubation time by 1.4 seconds with standard deviation of 1.22 at 99.9% confidence and 95 % power. Pilot study was done in 10 patients So total of 80 cases were taken to increase efficacy of the result. Randomisation was done by sealed envelope method. Patients were randomly allocated into two groups. Group C- Cuff inflation technique (n=40) was used for nasotracheal intubation and Group M- Magill forceps technique (n=40) was used for nasotracheal intubation.

Patients were explained about procedure and written informed consent was taken. Patients were kept nil by mouth overnight.

On the day of surgery, anaesthesia machine, monitor, airway equipments, drugs were checked and kept ready. Multipara monitor was attached and Vital Parameters like pulse rate, mean pulse rate at the time of induction, after intubation, 3 min, 5 min, 10min, 15 minutes after insertion of ETT were observed in both the groups. Nasal preparation was done with application of xylometazoline 0.05% drops into each nostril 30 minutes before induction and lubrication of nose with lidocaine 2% jelly 10 minutes before procedure. Investigators were blinded to avoid bias in the study. All the patients were premedicated with Inj. glycopyrrolate 0.005 mg/kg intravenous, Inj. tramadol 1 mg/kg intravenous, Inj. ondensatron 0.08mg/kg intravenous and oral midazolam half an hour before proposed time of surgery. The IV access was secured with 18G IV cannula in recovery room and IV fluid started at 2-4ml/kg/hr. Pre oxygenation was done for six minutes through face mask and closed circuit with oxygen flow at six litres/min. Induction of general anaesthesia was done with inj. propofol 2-2.5mg/kg given intravenously and after loss of eyelid reflex inj. succinylcholine 2mg/kg intravenous was given. After disappearance of fasciculations from toes, flexometallic (wire reinforced) tube 23 cm was advanced from nose into the oropharynx and direct laryngoscopy was done. In Cuff inflation technique, once the tip was in oropharynx, it was inflated initially with 10 ml of air which was then incremented with 5 ml as per the need until the tip of Endotracheal tube was lifted and got aligned with glottic opening. Once the tube was into laryngeal inlet, the cuff was deflated and tube was advanced further into the trachea. Again the cuff of the tube was inflated with appropriate amount of air to achieve adequate tracheal seal. Proper placement of the tube was confirmed with capnography and bilateral chest auscultation. After the two attempts if tube was not aligned with glottic opening then intubation was done with the help of Magill forceps. It was considered as failed attempt.

Under direct laryngoscopy tip of the tube was identified and cuff was inflated with initially 10 ml of air which is then exceeded by 5 ml till tip is aligned with glottic opening. Once tip entered glottic opening cuff was deflated and tube advanced further

In Magill forceps technique (Figure 3), with the help of Magill forceps, once the tip reached oropharynx, Flexometallic(wire reinforced) tube was held away from cuff to avoid injury to cuff and align the tip in front of glottic opening and the tube was advanced further to achieve successful intubation. Then the cuff was inflated with appropriate amount of air to achieve adequate seal. Proper placement of the tube was confirmed with capnography and bilateral chest expansion. 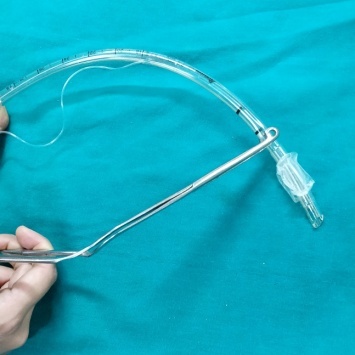 During advancement of ETT from oropharynx to laryngeal inlet, any manipulation required in the form of BURP (backward, upward, rightward pressure), rotation of tube or flexion of head was noted in both the techniques. Heart rate, blood pressure, SpO2, EtCO2 was noted before induction, at the time of induction, after intubation and, 3, 5, 10 and 15 minutes after intubation. The parameters observed were 1. Time required for intubation: It is a time taken for navigation of ET tube from oropharynx till confirmation of proper tracheal placement by square wave capnography. 2. N with the help of Magill forceps, umber of attempts of intubation. Maximum two attempts were allowed in both the groups. After two attempts of unsuccessful intubation, patient was intubated with conventional technique of Magill forceps in group C. In group M if more than two attempts were required, then these patients were excluded from the study. 3. Any manipulation required at the time of intubation 4. Injury to oropharyngeal structures and to the cuff of endotracheal tube (audible leak during intraoperative period after adequate seal pressure is achieved) was noted. Cuff was also checked postoperatively for any damage.

Mean and standard deviation values were taken out. Statistical analysis of the data for the various parameters was done using paired t-test for intra-group comparison and student t-test for intergroup comparison. Chi-square test was used for qualitative (non parametric) data using MedCalc software. The significance of statistical analysis was judged by p-value. The p value < 0.05 was taken as significant, and p value < 0.001 was taken as highly significant.

Number of attempts of intubation 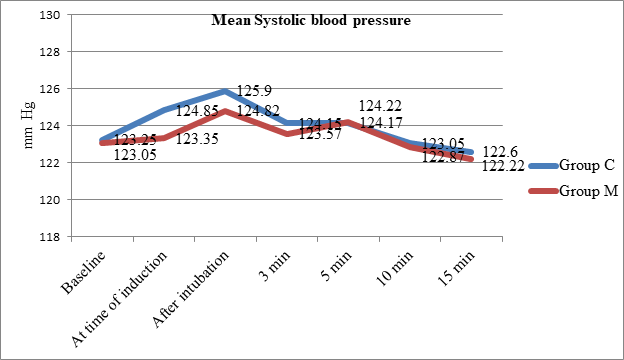 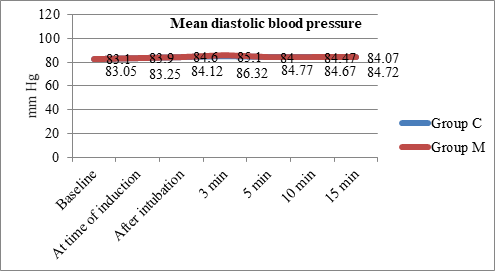 Nasotracheal intubation was popularized by Sir Magill in 1920.6 NTI can be done with the conventional laryngoscopy or with videolaryngoscope. Complications can occur during NTI like epistaxis, trauma to nasal mucosa, perforation of pyriform fossa, retropharyngeal perforation or olfactory nerve damage.6, 7 Now there are specialized tubes available, which are preformed, adjustable in shape, softer and reinforced to decrease the above complications. Wire reinforced tracheal tube reduces nasal morbidity and takes more favourable pathway for nasal intubation.7, 8 Therefore, in our study we preferred wire reinforced (flexometallic) tube. Preformed tubes are difficult to pass even under direct laryngoscopic vision, as they do not conform to the airway curvature and tend to remain along posterior pharyngeal wall.8 NTI with conventional laryngoscope requires help of Magill forceps, while NTI with videolaryngoscope is preferably done with cuff inflation technique.9 In patients with restricted mouth opening and cases in which introduction of Magill forceps is difficult, cuff inflation proves to be a good alternative and decreases chances of oropharyngeal trauma. In cancer patients use of Magill forceps may cause oropharyngeal mucosal injury and lead to bleeding.3 Availability of videolaryngoscope is an issue and it also requires expertise. Thus we decided to undertake this prospective randomized, single blinded clinical study to evaluate the effectiveness of two different techniques for nasotracheal intubation.

We observed slight difference in time period between both the techniques. It may be due to time taken to inflate and deflate the cuff. Findings of the present study were in accordance with study done by Kumar R et al. in the study done by Chung YT et al., it was observed that neutral head position combined with cuff inflation specially in patients with cervical instability resulted in comparable success rates for NTI.10 Khadake SM et al. found that the cuff inflation technique consistently improved the navigation of all flexometallic endotracheal Tube. With cuff inflation, intubation was successful in 19 of 20 patients (95%), and concluded that in normal patients, tracheal tube cuff inflation in the oropharynx increases the success rate of blind nasotracheal intubation.11 Elstraete ACV et al. assessed the efficacy of tracheal tube cuff inflation in the oropharynx as an aid to blind nasotracheal intubation.2

The cuff inflation technique can be used as an effective alternative to Magill forceps for oropharyngeal navigation of endotracheal tube under direct laryngoscopy guided nasotracheal intubation in patients with normal airways.