Sud and Sinha: Perioperative effect of dexmedetomidine on quality of analgesia and hemodynamic parameters in vaginal hysterectomy: A tertiary centre experience

Perioperative effect of dexmedetomidine on quality of analgesia and hemodynamic parameters in vaginal hysterectomy: A tertiary centre experience

Spinal anaesthesia is a commonly used technique in anaesthetic practice for gynaecological, lower abdominal, pelvic, and lower limb surgeries. Bupivacaine, a long acting amide is appropriate for procedures lasting for 2 to 2.5 hours. Intravenous agents epinephrine, phenylephrine, adenosine, magnesium sulphate, neostigmine and alpha2 agonists like clonidine and dexmedetomidine can be used to prolong duration of surgery.1

Dexmedetomidine is a highly selective α2 adrenoreceptor agonist. Analgesic effect at spinal levelis produced by stimulation of alpha2 receptors at the substantia gelatinosa of the dorsal horn which leads to inhibition of the firing of nociceptive neurons and inhibition of the release of substance P while at supraspinal level it inhibits the release of norepinephrine and its associated activity in the descending medullospinal noradrenergic pathway secondary to activation of central alpha 2 receptors.2 Alpha2A receptors affinity leads to hypnotic and analgesic effect. Sedation is produced due to suppression of neuronal firing in the locus coeruleus of the brainstem.3

Dexmedetomidine has 8-10 times higher affinity for α2 adrenergic receptors with selective affinity of alpha2 receptors (1600: 1) which is more as compared to clonidine. It has short onset of action and peak is achieved within 15 min. High first pass metabolism leads to poor oral bioavailability. Biotransformation occurs in the liver by N-glucuronidation & CYP-450 mediated hydroxylation into inactive metabolites. These inactive metabolites are excreted in urine (about 95%) and in feces (about 5%).3, 4

Dexmedetomidine is used for sedation like during awake Fiberoptic intubation in difficult airway and pediatric MRI. It is also used as premedication since it reduces the hemodynamic response during intubation and extubation and as antishivering agent. Dexmedetomidine helps in treating withdrawal symptoms of benzodiazepines, alcohol and opioids.5

The prospective study was carried out in the department of anaesthesia at a tertiary care hospital in North India and included 100 adult female ASA grade I/II patients undergoing vaginal hysterectomy surgeries under bupivacaine spinal anaesthesia from November 2012 to March 2014. The study was a randomised blind trial in which patients were divided in 2 Groups to compare effect of dexmedetomidine with control group. Baseline observation (HR, BP, Spo2, ECG) were recorded on arrival of patient in 0T and epidural catheter was inserted using Touhy’s needle following which patient were subsequently administered spinal anesthesia with 2.5 ml Hyperbaric Bupivacaine (5%) and 25 µg Fentanyl intrathecally. subsequently epidural catheter was inserted into epidural space via Touhy’s needle.

Adult females of 35-65 age group with ASA grade I/II were included in the study and patients on α2 adrenergic antagonist, calcium channel blocker and ACE inhibitor, known hypersensitivity to any drugs, history of arrhythmias and heart block were excluded from study.

To detect a difference assuming a large effect (using the results of pilot studies) in the mean duration of analgesia between any two groups with α=0.05 and power = 80% minimal sample size in each group were taken as fifty (50) assuming the dropout rate/protocol violation as 10%.

Modified Ramsay sedation scale was used to assess the level of sedation and Intraoperative pain/discomfort of patient was treated with 10 ml of 0.25% Bupivacaine via epidural catheter along with measurement of time and level of sensory block.

Intraoperatively baseline parameters were measured in both groups initially at 5 min interval for 30 min then every 10 mins till the end of surgery. Sensory level block was assessed by using pin prick sensation with 23 G hypodermic needle in mid clavicular line bilaterally along with time taken to reach the highest sensory level and time for two dermatomal progressions. Motor blockade was assessed by Modified Bromage Scale. Time taken for motor blockade to reach Modified Bromage Scale 3 and regression of motor blockade to Modified Bromage Scale 0 was noted. Surgery was allowed to start after reaching dermatomal level of T10 Hemodynamic parameter of Hypotension was defined as decrease in systolic blood pressure by 30% from baseline or systolic blood pressure lower than 90 mm of Hg, treated with 6 mg of Intravenous mephentermine and a bolus of 250 ml of ringers lactate solution over 10 min while bradycardia was defined as Heart Rate <50 beats /min treated with 0.6 mg of Intravenous atropine.

Required approval from institutional ethical committee of University was taken. Informed written consent after detailed preanaesthetic check-up was taken. The data was compiled, tabulated and statistically analyzed using SPSS version 13. Student t test was used for analysis of continuous variables like duration of analgesia, haemodynamic parameters and Categorical variables of sedation score were expressed as frequencies and percentage and nominal categorical data between the groups were compared using chi-squared test. Results were presented as mean ± SD In all statistical tests, a p-value < 0.500 was considered significant.

Modified Ramsay sedation scale was used to assess the level of sedation. Intraoperative pain/discomfort of patient was treated with 10 ml of 0.25% Bupivacaine via epidural catheter along with measurement of time and level of sensory block.

Dexmedetomidine group had prolonged duration of Time to first request for rescue analgesic on comparison with control group and it was statistically significant.

Ramsay sedation score were comparable in both groups at baseline level but intraoperative scores were higher indexmedetomidine group with 46 % patients achieving a score of more than 4. Sedation scores varied over 2-3 with a mean of 2.09 in the control group. Postoperative period had no significant difference in scores of both the groups 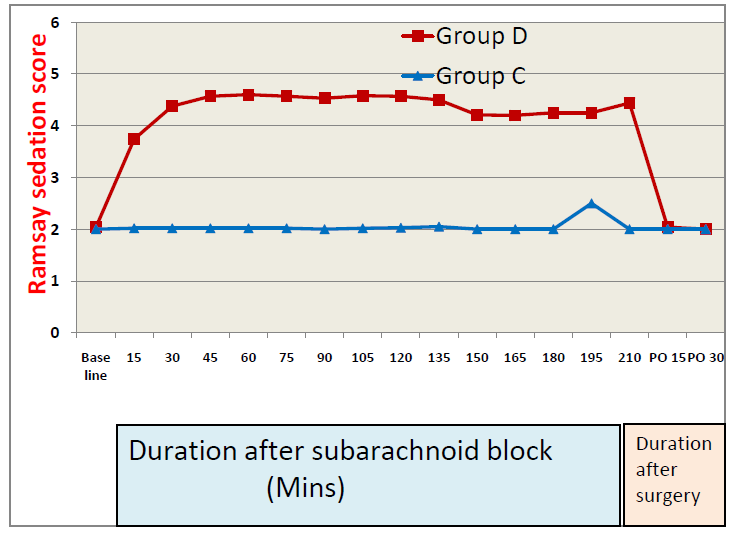 The hemodynamic parameters of heart rate, blood pressure (systolic, diastolic, mean) along with hemodynamic complications like hypotension, bradycardia were compared in each group and between both the groups before CSE block, at regular intervals after CSE block, till 30 mins after completion of surgery.

Bar diagram comparing the heart rates within the groups 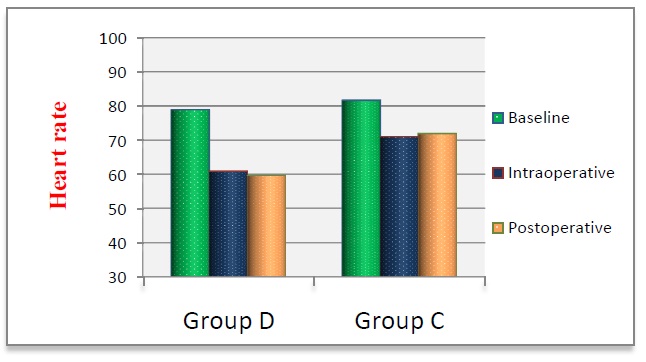 30% patients in dexmedetomidine group had transient intraopertive heart rate <50/min while only 4 % patients had bradycardia in control group.

Bradycardia was observed as significantly lower in dexmedetomidine group on comparison with control group.

Respiratory rates and oxygen saturation were comparable in both the groups during surgery and in postoperative duration.10% of control group patients showed post operative shivering while 4% patients in dexmedetomidine group had post operative nausea and vomiting. 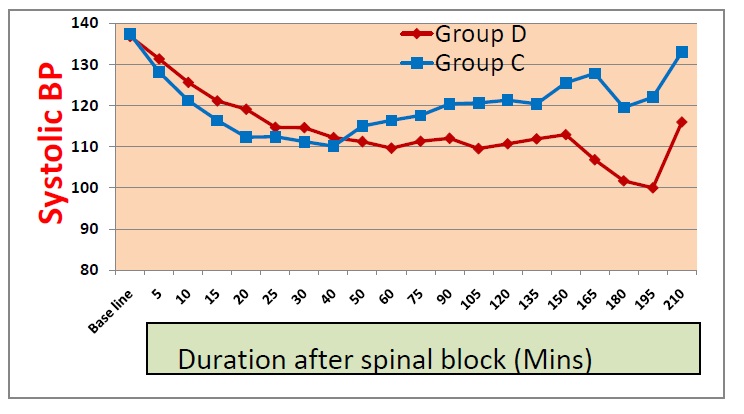 Bar diagram comparing the diastolic BP within the groups 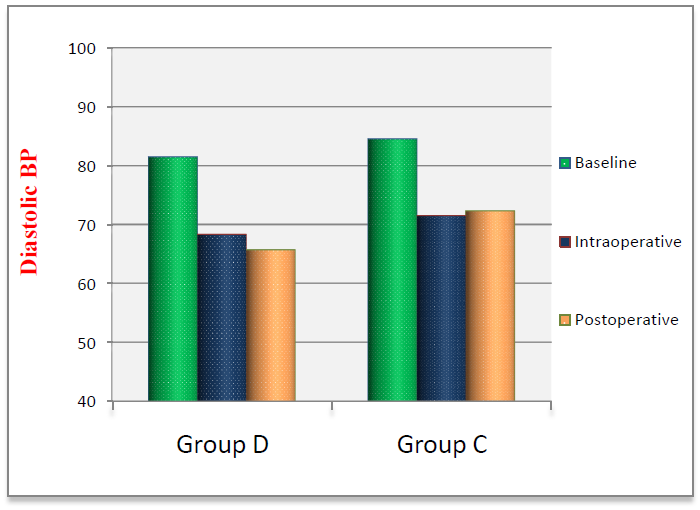 Spinal anesthesia was introduced for the first time by August Bier in 1899 by using the technique of Quincke. Cocaine was used to produce the effect in the initial years.6

We performed this study to evaluate the effect of the duration of perioperative analgesia by adding intravenous dexmedetomidine to subarachnoid hyperbaric bupivacaine and fentanyl, to observe the intra-operative and post operative hemodynamic changes in two groups, correlate the intra-operative and post-operative sedation effect of dexmedetomidine (using modified Ramsey scale), observe highest sensory level achieved along with time taken for sensory block to regress to T10 dermatomal level.

Minimal sample size required under each group was fifty (50) assuming the dropout rate/protocol violation as 10%.

Hypotension following intravenous Dexmedetomidine was in our study(14%)had similar comparison to study of Elcicek et al.11 who reported use of vasoconstrictors in 16% of patients which was treated with mephentermine.

Intraoperative mean arterial pressure (MAP) after spinal block was comparable in both the groups in our study, Al Mustafa et al.7 and Tekin et al.8 also reported no significant difference in MAP between dexmedetomidine group vs control group.

In our study, respiratory rates and oxygen saturation were comparable in both the groups during surgery and in postoperative duration which was consistent with findings of Al Mustafa et al.7 and Kaya et al., 12 Similar results were reported by Elcikek et al.11 Despite providing good sedation, dexmedetomidine does not cause significant respiratory

The incidence of nausea and vomiting in our study was 4% (2 patients) in dexmedetomdine group and similar incidence was reported by Tekin et al.8 (6.7% in dexmedetomidine group).

Dexmedetomidineis new generation highly selective alpha-2 adrenergic receptor agonist which is extremely effective in prolonging the duration of motor and spinal blockade after bupivacaine spinal anaesthesia. Dexmedetomdine is a more suitable adjuvant to spinal anaesthesia compared to clonidine as it has more sedative and analgesic effects due to its more selective alpha 2A receptor agonist activity. It provides good sedation during surgery which quickly reverses after stopping the drug. The sedative action of dexmedetomidine is due to suppression of neuronal firing in the locus coeruleus of the brainstem and analgesic action is mediated by supraspinal and spinal site of action. Opiod sparing effect of Dexmedetomidine makes it useful adjunct in acute and chronic painful conditions.

Intravenous dexmedetomidine significantly decreases the heart rate and is associated with higher incidence of bradycardia due to pharmacological actions of decrease in sympathetic outflow and decreased circulating levels of catecholamines.13, 14

Dexmedetomidine is a useful sympatholytic drug sympatholytic effect due to central α2 A receptor, thereby blunting the hemodynamic response to tracheal intubation, extubation as well as surgical stress response.

Vaginal hysterectomy Surgery with long acting local anaesthetic like bupivacaine still requires higher doses of analgesics in the post-operative period. Opioids are commonly used as adjuvants to intrathecal local anaesthetics but they are associated with many side effects. Our results point to the need for a more newer additives to local anaesthetics through both intravenous and intrathecal route for being investigated in an effort to increase the duration of post operative analgesia and to evaluate the potential prognostic significance of these drugs.

No funding was received for this study.

The authors declared no conflicts of interest.