Combined popliteal and saphenous nerve block vs NSAIDS for post operative analgesia in below knee surgery patients: A cross-sectional study

Aim: To compare the efficacy of combined popliteal and saphenous nerve block with NSAIDS for postoperative pain relief in below knee surgery patients.

Statistical Analysis: The statistical power of sample was 80% and type I error (α) of 0.05. The distribution of the data was evaluated using the Shapiro-Wilk test. For data with a non-normal distribution, the Mann-Whitney U test was used in intergroup comparisons. The data were expressed as the median, minimum and maximum (min-max). For comparison of postoperative analgesic use, the chi-square test was used, and complication rates were compared using a cross-ratio test. P-values less than 0.05 were considered to be statistically significant in all the analyses.

Popliteal blockade results in anesthesia1 of the entire distal two thirds of the lower extremity, with the exception of the medial aspect of the leg. Cutaneous innervations of the medial leg below the knee is provided by the saphenous nerve, a superficial terminal extension of the femoral nerve. Depending on the level of surgery, the addition of a saphenous nerve block may be required for surgery.2

The saphenous nerve originates from the L3-L4 nerve roots and is a terminal branch of the femoral nerve. This purely sensory nerve innervates the medial, anteromedial, and posteromedial lower leg, ankle, and foot.3

Nonsteroidal anti-inflammatory drugs (NSAIDs) are a well-established class of drugs that have long been used for the blockage of pain and inflammation in both acute and chronic pain. They can maintain a constant level of prostaglandin inhibition over the course of a prolonged surgery and during the postoperative period. They have no risk of abuse; therefore, postoperative use of NSAIDs helps reduce growing concerns of opioid abuse and the potential over-prescription of opiate. 8

NSAIDs have been shown to be effective in orthopedic surgery; they decrease pain and inflammation, therefore allowing patients to have an increased knee range of motion, leading to a shorter period of physical therapy.

Despite proven efficacy in postoperative pain management, there are still growing concerns of NSAID adverse events (AEs) which limit their use particularly with high-risk patients, such as the elderly or patients with preexisting renal insufficiency. NSAIDs are well known to be associated with gastrointestinal, renal, and cardiovascular side effects.

To determine comparative efficacy of combined popliteal and saphenous nerve block with NSAIDS for post operative pain relief in knee and below knee surgery patients.

With the approval of Hospital research ethical committee and informed and written consent, this study was conducted in cross-sectional way at Department of Anaesthesia and Critical Care of S.N. Medical College, Agra (November 2018 – April 2020). The subjects belonged mainly to the catchment area of this government district hospital.

Based on previous studies we presume that combined block will reduce 24 hr post-operative analgesic by 30 % (type I error 0.05 & power of 0.8). On this basis 70 patients were taken into account.

After obtaining written informed consent from the patients, they were Randomized into two groups, GROUP C and Group N.

Patients of both the groups were cannulated in the procedure room with a wide bore intravenous (IV) catheter (18G) and infusion with lactated Ringer's solution (RL) was started. A multichannel monitor was attached. Patients were given spinal anaesthesia for below knee surgeries at L4-L5 and at the end of surgery, for postoperative analgesia, Group C received 12ml of bupivacaine plain 0.5% for popliteal nerve block and 8ml of bupivacaine plain 0.5% for saphenous nerve block. Group N received 1000mg of intravenous paracetamol.

Under all aseptic precautions and with the patient in a supine position, a point is marked 7.0 cm cephalad to the lateral femoral condyle in the groove between biceps femoris and vastus lateralis muscles. The needle was advanced until the shaft of the femur was contacted. After withdrawing the needle, it was redirected posteriorly at an angle of 30 degree with the horizontal plane. Then after negative aspiration for blood to exclude vascular puncture and confirmation of the position of the needle 12ml of 0.5% bupivacaine plain was injected.

With the patient in supine position, the medial condyle of the femur of the operated site is palpated. After taking all the aseptic precautions, 8ml of 0.5% of bupivacaine plain was injected in a fan-wise direction between the skin and the periosteum of the medial surface of the condyle.

Mean arterial pressures (MAP) and heart rate (HR) were recorded before starting the procedure and just after the blockade was confirmed. The heart rate, non-invasive blood pressure, Sp02 and VAS values were recorded during the pre- operative period and then at 15 min intervals after the induction of spinal anaesthesia. . When the mean arterial pressure dropped below 65 mm Hg, 5-10 mg IV ephedrine was injected.

After the block the patients were shifted to PACU for observation.

Residents of the recovery room who were not involved in the study and were blinded about the anaesthetic technique due to identical dressings, recorded the data. During follow-up their blood pressure, heart rates and VAS values were recorded at arrival in PACU, 30 mins. and 45 mins. and at 1, 2, 6, 12 and 24 hr. After the regain of proprioception of great toe, ability to dorsiflex the foot and return of perianal sensation, observer encouraged the patient to ambulate under supervision. When the patient succeeded in ambulation, the time to ambulation was noted. Postoperative pain was assessed with the verbal analogue scale (VAS) score of 0 - ­10 (0 = no pain and 10 = worst catheter of appropriate size, maintaining strict asepsis. Other postoperative adverse events were recorded.

The statistical power of sample was 80% and type I error (α) of 0.05. The distribution of the data was evaluated using the Shapiro-Wilk test. For data with a non-normal distribution, the Mann-Whitney U test was used in intergroup comparisons. The data were expressed as the median, minimum and maximum (min-max). For comparison of postoperative analgesic use, the chi-square test was used, and complication rates were compared using a cross-ratio test. P-values less than 0.05 were considered to be statistically significant in all the analyses.

Patient’s characteristics were comparable among the two groups in the demographic data.(Table 1).

Pain scores at rest were 0 in PACU and at 1st hour in both the groups (may be due to effect of spinal anaesthesia). Reduced pain scores were seen in block group as compared to NSAIDS group from 6th to 24 hours.(Figure 1)

Pain at surgical site at rest 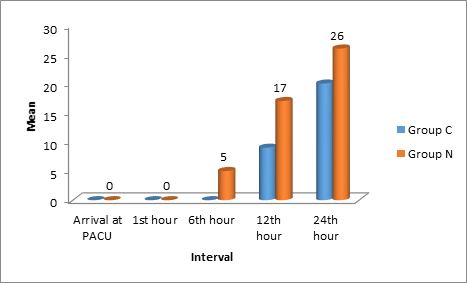 Time for first request for analgesia was quite prolonged in block group in comparison to NSAIDs group. Also VAS score was significantly higher in NSAIDs group as compared to BLOCK group (Table 2). 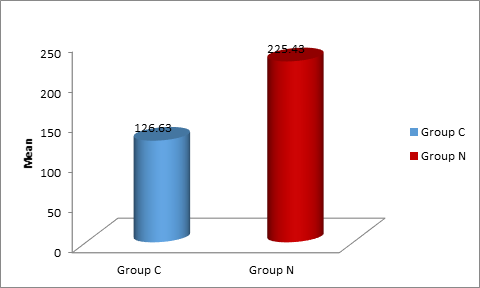 Reduced post-operative nausea and vomiting were noticed in block group as compared to NSAIDs group during 6th hour, 12th and 24th hour postoperatively. At other points of time, both the groups were comparable to each other and no statistically significant difference was found. (Figure 3)

Post-operative score for nausea and vomiting 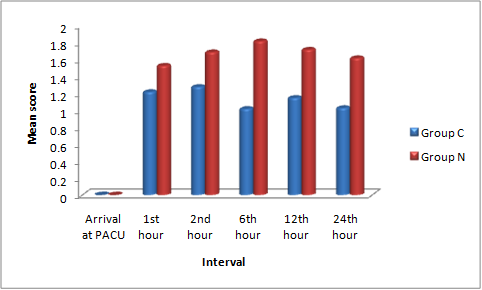 Overall 95% of the patients were satisfied with their analgesic regimen among Block group as compared to 65% among group N (Table 3).

In this study we sought to determine the effectiveness of combined popliteal and saphenous nerve block with NSAIDs.

Main outcome of our study is that patients with combined block has lower NRS scores. Also the first request of analgesia and total analgesic requirement is significantly lower in combined block group as compared to NSAIDS group. Several studies supported our outcome. In a study done by Hassan A. et al 9 in 2017-18 found that eight (80%) and six (60%) patients with combined popliteal and saphenous nerve blocks, experienced no pain in day zero and day one, respectively. Another study done by Xu J, Chen XM, Ma CK, Wang XR10 in 2014 found that compared with systemic analgesia alone, peripheral nerve blocks adjunctive to systemic analgesia resulted in a significantly lower pain intensity score at rest, using a 100 mm visual analogue scale, at all time periods within 72 hours postoperatively.

The mean time for first analgesic requirement in group C was 731 min, as compared to Group N where it was 289.6 min(p<0.001). Also VAS score was significantly higher in NSAIDs group as compared to BLOCK group at the time of demand of rescue analgesia.

Incidence of post-operative nausea and vomiting was also less in Group C as compared to Group N.

When we enquired about patient satisfaction, overall 95% of the patients in block group (Group C) were satisfied with their analgesic regimen as compared to 65% among the NSAIDs group. Also, there was no significant difference in discharge of patients from PACU and Hospital in both the groups.