Materials and Methods: We have recruited sixty patients scheduled for an elective LSCS which were enrolled into two groups to receive TAP block with bupivacaine 0.2% 15ml Group B (n=30) versus ropivacaine 0.2% 15ml Group R (n=30) + dexamethasone 2mg bilaterally. TAP block was administered on completion of surgery. Primary objective was to compare time to rescue analgesia in postoperative period. Secondary Objectives were to compare hemodynamic response during postoperative period, measure the intensity of pain using visual analogue scale (VAS), number of analgesic doses in first 24 hours, patient satisfaction with pain management and complications if any.

Conclusions: This study concludes that 0.2% ropivacaine provided a longer duration of analgesia compared to 0.2% bupivacaine when used in TAP block for post-operative analgesia in LSCS deliveries.

After obtaining Institutional Ethics Committee approval IEC No. 2020/638, and written informed consent, sixty American Society of Anaesthesiologists (ASA) I and II patients, of 18-40 years of age posted for elective caesarean section were included in a prospective, randomised, double-blind, controlled clinical trial over a period of 4 month.

Following a comprehensive pre-anaesthetic evaluation, all the patients were explained about Visual Analogue Score (VAS) for pain in their own vernacular language and were electively fasted 8 hour pre-operatively.

In the operating room, standard monitoring, including electrocardiogram, non-invasive blood pressure, arterial oxygen saturation was used throughout and two wide bore venous access was secured. Patients were premedicated with intravenous ranitidine 50mg and intravenous ondansetron 8mg. Patients were preloaded with 500 ml of Ringer Lactate. All patients received a standardized spinal anaesthesia with 0.5% hyperbaric bupivacaine 2.2 ml without any additive in sitting position without any table tilt. Assessment of block was done by pinprick. Target height was T6. Patients were monitored intraoperatively. Hypotension was taken as fall in systolic blood pressure > 30% of baseline and was treated with incremental doses of Inj. mephenteramine 6 mg and bolus of 200 ml of Ringer Lactate. Bradycardia was taken as heart rate < 50 beats per minute and treated with Inj. atropine 0.6 mg. No analgesic or sedation was given to any patient intra operatively.

The anaesthesiologist who observed the patients in PACU was blinded to the drug injected in TAP block. Patient was monitored every 15 minutes for an hour, then hourly for 2 h in PACU, then after shifting to ward at 4, 8, 16, 24, 48 h postoperatively for pulse rate, blood pressure and, pain and complications if any.

Pain was assessed according to Visual Analogue Score (0 = no pain and 10 = worst possible pain). Patient were given rescue analgesia in the form of inj. tramadol 50 mg iv. at VAS score 4 (i.e. moderate pain). Recession of motor block of spinal anaesthesia was noted by Modified Bromage Scale. The duration of analgesia was considered to be from the time of TAP block injection to VAS score of 4. Patient’s satisfaction with pain management on a scale of 0-10 at the time of discharge was enquired. Patient was also observed for any other postoperative complications like haematoma, flank fullness, swelling at the site of injection, etc.

Sample size calculation was done using G Power version 3.1.9.2. from the results of the pilot study. We calculated that 26 patients per group would be required using 0.05 and 0.2 alpha and beta errors. Considering a 10% dropout rate, a total of 30 patients were included in each group. Statistical analysis was done by using the SPSS software 16 version. Quantitative data were analysed as mean ± standard deviation (SD) and qualitative data as frequencies. Unpaired t-test was used to compare normally distributed continuous variables between groups. Categorical data were compared with chi square test. Confidence interval was 95%. P < 0.05 was considered statistically significant.

In our study of 60 sample as shown in consort diagram (Figure 2), the demographic data were comparable in both the groups. Mean age was 24.20 ± 3.77 years. Demographic profile, baseline pulse, mean arterial blood pressure and duration of surgery were comparable in both groups (Table 1). Baseline pulse and blood pressure was considered at the end of surgery before performing the block and there was no significant difference between the two groups. The pulse rate and mean arterial blood pressure during study interval, was higher in Group B than Group R, though it was within normal physiological range for both the groups. 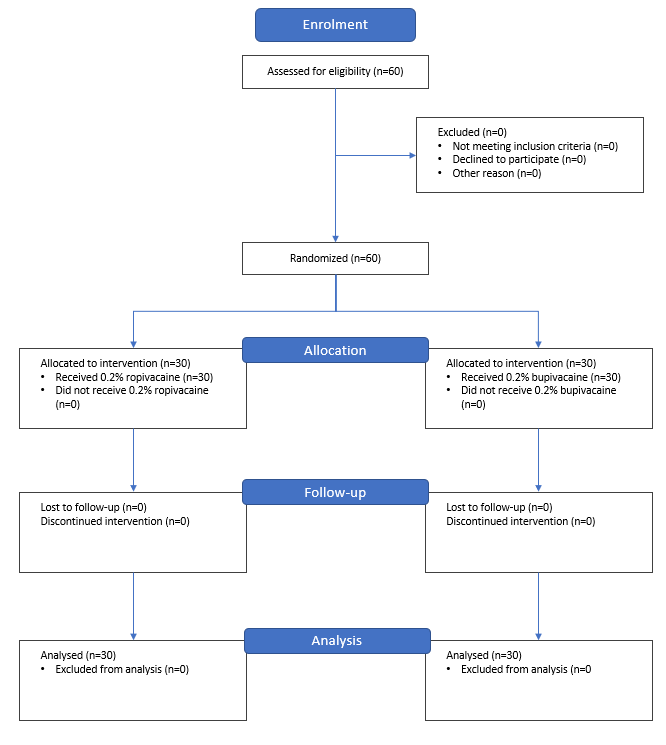 Comparatively higher hemodynamic stability, longer duration of analgesia with less doses of rescue analgesics lead to higher patient satisfaction score seen in Group R (Figure 5). Swelling and pain at the site of injection was a complication noted, in one subject in each group. 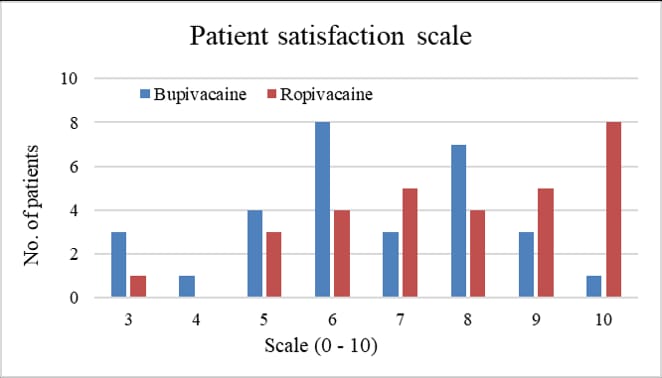 The benefits of effective postoperative analgesia are well-known, there is reduction in postoperative morbidity and stress response, along with improved surgical outcome and patient comfort.8 Effectively controlled pain not only facilitates early rehabilitation but also accelerates recovery from surgery.

Multimodal analgesia is an approach used to treat pain through several mechanisms via multiple sites of the pain pathway. By directly blocking the afferent nerve supply of the abdominal wall we are capable of providing significant postoperative analgesia in patients undergoing abdominal surgeries, with techniques such as abdominal field blocks, ilioinguinal, and hypogastric nerve blocks. TAP blocks are one such safe procedures for postoperative multimodal analgesia. Since the transversus abdominus plane has relatively less blood vessels, the risk of vessel puncture, intravascular injection and systemic toxicity of the local anaesthetics, complication which are often associated with other peripheral nerve block procedures are reduced. A technical advantage is provided by the simplicity of the procedure for clinical use. It can be best achieved with the combination of long-acting local anaesthetics with an adjuvant.9 TAP block has been used for various abdominal procedures other than caesarean section such as large bowel resection, open/laparoscopic appendectomy, total abdominal hysterectomy, laparoscopic cholecystectomy, open prostatectomy, abdominoplasty with or without flank liposuction, inguinal hernia and iliac crest bone graft.10, 11, 12, 13, 14, 15, 16, 17

A meta-analysis conducted by R Champaneria et al18 tested the effectiveness of TAP blocks for acute pain relief after caesarean section. It compared 20 studies and concluded that TAP blocks significantly reduced pain at rest when compared with placebo or no TAP blocks (p=0.008) and intrathecal morphine (p<0.0001). Both these comparisons showed the greatest improvement with pain on movement, (p=0.005 and p<0.00001). Morphine consumption was significantly reduced with TAP blocks when compared to placebo or no TAP blocks (p<0.00001). In a study conducted by A.Z. El Abdein Mohamed,19 bilateral 20 ml of ropivacaine 0.2% when used in TAP block provided postoperative analgesia similar to bilateral 20 ml of ropivacaine 0.5% in TAP block after caesarean delivery performed with general anaesthesia. In our study we used 0.2% ropivacaine and 0.2% bupivacaine.

Sirvasta et al.20 conducted a randomized double-blind study on 62 pregnant women scheduled for caesarean delivery to assess the role of TAP block as a component of multimodal postoperative analgesia. They found that TAP block significantly decreased pain score at all study times during rest and movement and also decreased parturients consumption of tramadol through patient-controlled analgesia. In our study, TAP block provided good analgesia and reduced requirements for intravenous tramadol postoperatively. McDonnell et al.21 in their study evaluated the effectiveness of TAP block with ropivacaine for postoperative analgesia in caesarean delivery performed under spinal anaesthesia, and they found that TAP block significantly decreased the pain score and 48 h morphine consumption. In our study the overall intravenous analgesic requirement was reduced and patient had reduced pain scores 24hrs post-operatively.

This study had many limitations, the 1st limitation due to the unavailability of ultrasound machine in our institute we used the landmark technique, hence it was not possible to limit the intramuscular spread of LA solution leading to incomplete separation of the fascial plane which may affect the amount of LA involved in the block. 2nd limitation was that the study could not eliminate the psychic factor of baby which strongly affects the mother in our locality and could encourage and motivate the mother to tolerate pain and move if it is a male baby. Finally, 3rd limitation was that the study could not stabilize the severity of surgical trauma or severity of uterine contractions which led to variability of pain severity.  Considering these limitations, further multi-centric studies are encouraged to increase the power of this study.

This study concludes that 0.2% Ropivacaine provided a longer duration of analgesia compared to 0.2% Bupivacaine when used in TAP block for postoperative analgesia in lower segment caesarean section deliveries.

AN Rafi Abdominal field block: A new approach via the lumbar triangleAnesthesia20015610246