Background: Epidural analgesia is the most commonly used method for surgical anesthesia, obstetric analgesia, post-operative pain control, and chronic pain management. These epidurals are used either as a single-shot technique or with the catheter that allows intermittent boluses or continuous infusion, or both. All of these variables are controlled by choice of drug concentration, dosage, and level of injections.

Conclusion: Tramadol or Midazolam's addition to caudal epidural block with ropivacaine showed significant prolongation of post-operative analgesia compared to ropivacaine alone. The mean duration of analgesia was more among ropivacaine with the Tramadol group.

International Association for the study of pain shows that “Pain is an unpleasant sensory and emotional experience associated with actual or potential tissue damage.” Continuous epidural anesthesia is a neuraxial technique offering a wider than single-dose spinal anesthesia. An epidural block can be performed at the lumbar, thoracic, or cervical, and sacral epidural anesthesia is referred to as a caudal block.1 Caudal block is probably the most easily learned and mastered technique of all regional anaesthetic procedures.2 A significant limitation of this technique is the relatively short post-operative analgesia duration. Epidurals can be used as a single-shot technique or with the catheter that allows intermittent boluses or continuous infusion, or both.3 The motor block can range from none to complete. The epidural space surrounds the dura mater posteriorly, laterally, and anteriorly. Nerve roots travel in this space as they exit laterally through the foramen and course outwards to become peripheral nerves.

Spinal, epidural, and caudal neuraxial blocks result in a combination of sympathetic blockade, sensory blockade, or motor blockade depending on the dose, concentration, or volume of local anesthetic administered. Spinal anesthesia requires a small mass (i.e., volume) of the drug that is almost devoid of systemic pharmacological effects to produce rapid (20 minutes) after a large mass of local anesthetic that produces pharmacologically active systemic blood levels, which may be associated with side effects and complications unknown to spinal anesthesia. Epidural anesthesia is slower in onset (10-20min) and may not be as dense as spinal anesthesia, a feature that can be useful clinically. For example, using relatively dilute concentrations of a local anesthetic combined with opioids and epidural analgesia without motor block.4, 5

Epidural anesthesia is a focal neuraxial block strategy with numerous applications. Its adaptability implies it can be utilized as a sedative, as a pain-relieving adjuvant to general sedation. The post-operative absence of pain in methodology includes the lower appendages, perineum, pelvis, mid-region, and chest. 6, 7

Ropivacaine is a synthetic local anaesthetic agent with a propyl group to which hydrogen is added to the carbon of piperidine ring at the carboxy chain, enhancing its ability with low cardiotoxicity. Ropivacaine blocks impulse conduction in nerve fibers by reversible inhibition of sodium ion channels. 8 Tramadol is a synthetic opioid of the amino cyclohexanol group. It also inhibits neuronal uptake of noradrenaline and enhances serotonin (5-HT) release. 9 Midazolam is a water-soluble imidazobenzodiazepine that acts throughout CNS but is concentrated especially in the cortex and midbrain. 10

In this prospective, randomized, double-blinded comparative study total of 160 samples were studied. Patients who underwent surgeries below the umbilicus were done under the epidural technique at Govt. Kilpauk Medical College hospital and Govt. Royapettah Hospital, Chennai, between November 2019 and April 2020, was assessed for inclusion and exclusion criteria and included in the study after obtaining written informed consent. Institutional ethics committee approval was obtained.

Inclusion Criteria: Patients within 18-60 years of both the gender undergoing elective surgeries below the umbilicus under Epidural block who have given valid informed consent were included in the study.

Exclusion criteria: Patients with an allergy or sensitivity to local anaesthetics/ Tramadol/ Midazolam, with bleeding disorders, with pre-existing peripheral neuropathy of lower limb, with history of severe cardiac, respiratory, hepatic, or renal disease, or who does not satisfy inclusion criteria were excluded from the study.

After obtaining the institutional research and ethics committee approval (EC.No.270/2019), written informed consent was obtained with respect to the type of anaesthesia, the study being conducted, mode of pain relief, and nature of surgery. Pre-anesthetic assessments of all the patients were done the day before surgery. Patients were premedicated with tablet diazepam 5mg and tablet ranitidine 150 mg at night before surgery and in the morning of surgery with a water sip. After shifting the patient to an operating table, standard anaesthesia monitoring in the baseline measurement of heart rate, noninvasive arterial blood pressure, and oxygen saturation were observed. Blinding was assured by drug preparation by a consultant anaesthesiologist not involved in the further follow-up of the study. Patients were divided into two groups of 80 patients of each as:

Intravenous access was secured with an 18 gauge cannula. After aseptic precaution, an epidural catheter was placed, and an epidural test dose was given. Sensory and motor block evaluation was done every 5 minutes after giving block until complete motor blocks. Sensory block and Motor block were assessed with a 23 G hypodermic needle in all nerves' distribution, for the surgeries below the umbilicus, desired level of block T10.

The onset time for sensory or motor block and Complete Motor block, duration of motor block was monitored closely.

The pain was assessed every 30 minutes for the first 2 hours and then 1 hour till 24 hours in the recovery phase. Testing for sensory and motor block regression was done every 15 minutes until complete resolution. The time between the end of local anesthetic administration and first rescue analgesic administration is recorded as the duration of analgesia, rescue analgesia-visual analogue scale >4, on patient request.

Descriptive statistics were done for all data and analyzed with the unpaired t-test and ANOVA single factor test. Statistical significance was taken as P<0.05. The data was analyzed using SPSS version 16 and Microsoft Excel 2007.

The patients were given rescue analgesia when they themselves complained for pain and their VAS was ≥7/10. Our results also showed mean time to first rescue analgesia in group Ropivacaine with Tramadol was 426.75±42.6 minutes and in group Ropivacaine with Midazolam was 343.5±50.4 minutes respectively, which depicts statistically significant difference across the group (p<0.001).

During the comparison of VAS scores across the two groups. The result showed a statistically significant difference in VAS score at 12 hr across the group (p<0.005).

No ADR reported in both groups. 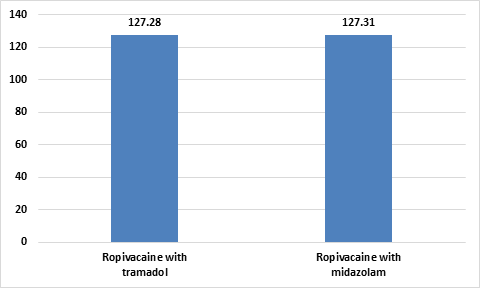 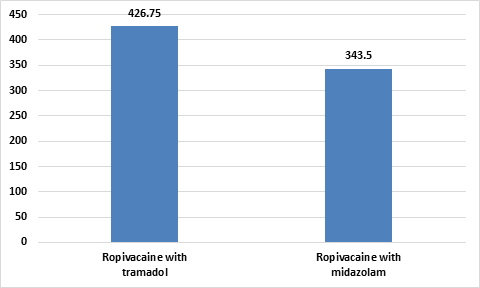 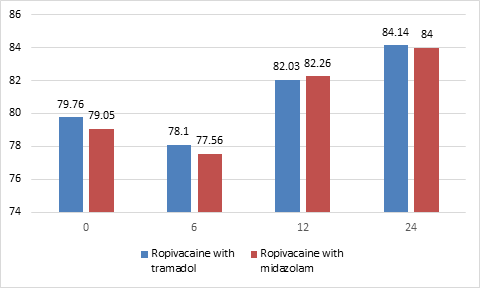 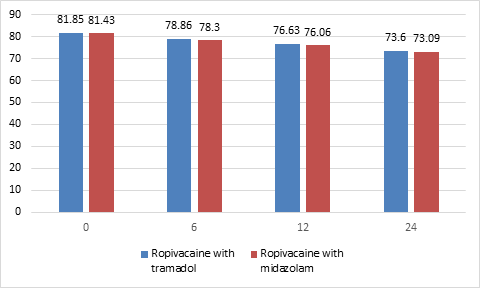 Comparison of opioid requirement in 24 hours 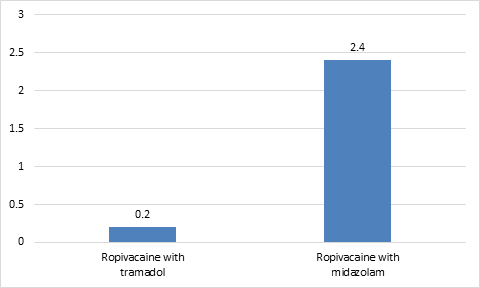 Pain is a body's response to an adverse input, whether or not there is actual tissue damage.8 Individual differences in pain response may be influenced by age, gender, genetic composition, and the surgical site.9, 10 Around 80–90% of surgical patients report moderate to severe pain after surgery.11, 12 The most common cause of post-operative morbidity in acute nociceptive discomfort caused by surgical incisions.

Hypertension, tachycardia, inadequate coughing, basal atelectasis, deep vein thrombosis, and sleeplessness are all symptoms of poor post-operative pain management. Aside from that, it prevents early ambulation and lengthens hospital stays.13

In the present study, we have attempted to compare the two commonly used, easily available, and relatively inexpensive agents, Tramadol and Midazolam, as an adjuvant in caudal anaesthesia along with ropivacaine, an amino amide local anaesthetic agent. The present study was conducted among 160 participants, with 80 in Ropivacaine with Tramadol group and 80 in Ropivacaine with Midazolam, respectively.

In the study conducted by Krishnadas A et al., all the study participants in the various group had no statistically significant difference with respect to patient age, sex, weight, and duration of surgery. Even the baseline vital parameters were comparable between the groups.7

Our study established the efficacy of Tramadol and Midazolam as an effective adjuvant with ropivacaine for prolonging the duration of post-operative analgesia. Similar to earlier studies, the unpleasant tramadol side effects of nausea and vomiting were not seen in our study.13 There was no incidence of respiratory depression or sedation, and the motor block was also minimal. There was no incidence of pruritus or bladder retention in any group.12