Background and Aims: Propofol has been used since ages as induction agent to aid in insertion of Supraglottic airway devices however its side effects like hypotension, apnea and pain on injection do coexist. To avoid these side effects sevoflurane has been studied and well recognized because of its sweet smelling property. We conducted this study with primary aim to compare the insertion conditions such as no. of attempts for insertion, hemodynamic variations and awakening after surgery. The secondary aim was to note the adverse effects associated with Sevoflurane and propofol.

Conclusion: Propofol provided better conditions for I-gel insertion with manageable hypotension while the patients induced with Sevoflurane were hemodynamically more stable but the jaw relaxation was less as compared to that provided by propofol. Induction with 8% Sevoflurane by Vital Capacity Breath (VCB) technique can be an alternative for induction in high risk patients. Also the awakening from anaesthesia is faster with sevoflurane and is more suitable for patients demanding early discharge after day care surgeries.

I-gel is a 2nd generation cuffless Supraglottic airway device. Due to its non inflatable seal it avoids compression trauma that can occur with other supraglottic devices. It provides an anatomical seal of the pharyngeal, laryngeal, perilaryngeal structure.1 With use of I-gel muscle relaxation and laryngoscopy is avoided and hemodynamic changes are minimised.In a non paralyzed patient insertion of I-gel needs sufficient depth of anaesthesia.

Propofol has been the preferred agent of choice for induction to facilitate I-gel insertion as it suppresses airway reflexes.2 The awakening without any CNS residual effects is the principal characteristic of this drug. However Propofol is associated with certain adverse effects like painful injection, hypotension and Apnea.

Sevoflurane (Sevorane) is a clear, colourless, noninflammable liquid with low blood gas solubility co-efficient (0.69). Has a pleasant, non irritant, non pungent sweet smelling odour. It has minimal respiratory irritation and maintains hemodynamic stability. Preparations for Commercial use are free from additives or stabilisers.3

Our study was primarily aimed to compare the insertion conditions for I-gel, hemodynamic changes and awakening with Sevoflurane and Propofol in females undergoing short gynaecological surgeries. The secondary aim is to study the side effects of both agents while using each agent for induction.

We hypothesize that propofol will provide better insertion conditions but at the cost of hemodynamic fluctuations and pain on injection while sevoflurane will provide comparable conditions without adverse effects.

Patients were randomly allocated into two groups of thirty each Group‘S’ for Sevoflurane and group ‘P’ for Propofol using an automated computer generated list. A sample size of 28 in each group was calculated with power of 80% and alpha value of 0.05.To consider dropouts 30 patients in each group were analysed and a sample size of 60 was considered.

Patients with reduced mouth opening, neck or facial burns, Modified Mallampatti grade >3, BMI>30kg/m2. Thyromental distance <6cm, upper or lower airway obstruction or any other known allergies to the study drugs were excluded from the study.

Group P- Patients were induced with Propofol 2mg/kg with 40mg xylocaine IV (premixed). (It was used to reduce pain on injection of Propofol) Time to loss of consciousness was calculated from time of start of injection to loss of eyelash reflex and inability to open eyes to verbal commands. After loss of eyelash reflex ventilation was checked by bilaterally equal chest rise and ability to fill the reservoir bag. I-gel insertion was attempted after complete jaw relaxation.

A maximum of three attempts were given for i-gel insertion after which the study was abandoned in case of failed insertion and anesthesia was proceeded with endotracheal intubation. Heart rate, Blood pressure, were recorded successfully as mentioned in Figure 2, Figure 3. Ventilation of patients was noted. Adverse effects of bradycardia, coughing, laryngospasm, bronchospasm and fall in oxygen saturation if occurred were noted and managed accordingly.

After loss of consciousness following were noted-

Consort flow chart of the study 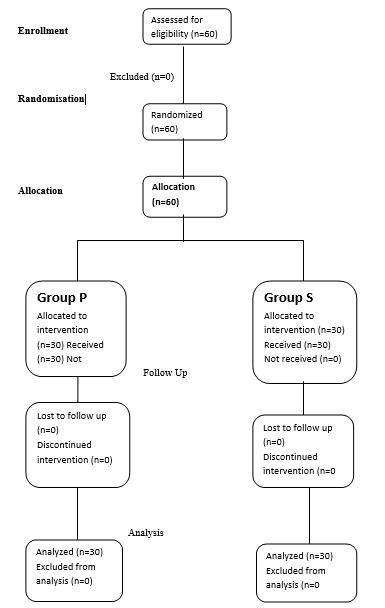 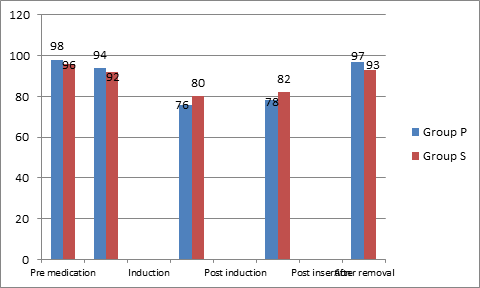 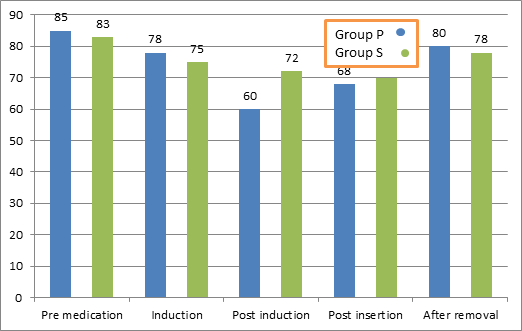 Table 1 demonstrates the Demographic details using variables Age, ASA, MPC, Weight and Sex comparing Propofol and Sevoflurane and the results are insignificant as the P value is more than 0.005.

Table 2 compares the Induction time with Propofol and Sevoflurane which gives us the result that time taken for induction using Propofol is less as compared to Sevoflurane.

Table 4 depicts the grading forinsertion conditions, jaw relaxation and complications in both groups.

I-gel has been used increasingly over a last few years for administering General Anaesthesia as an alternative to tracheal intubation in short surgical procedures. Propofol is the preferred agent for induction since long to aid i-gel insertion but the effects of hypotension and pain on injection obviates the need to look for other agents which would avoid the pain and maintain hemodynamic stability. In this attempt we conducted this study comparing sevoflurane and propofol and found that propofol remains the better drug of choice though sevoflurane can be considered an effective alternative in cases where hemodynamic stability needs strict maintenance.

The insertion conditions for supraglottic devices using propofol and sevoflurane have been compared earlier but the majority of reports are using LMA and varieties of LMAs. Only limited material is available regarding i-gel. The conditions for i-gel insertion are different than those for LMA and definitely needs a different discussion.4

The non inflatable seal of i-gel is known to cause less compression trauma which is more commonly encountered in LMAs and its varieties. Also the self adjusting cuff better seals the glottis aperture than that with LMA. Which in turn causes fewer hemodynamic fluctuations.5

Though the mouth opening required for i-gel insertion is more than that needed for LMA as it has a preinflated cuff. Hence insertion of i-gel needs better jaw relaxation.

Earlier studies6, 7, 8 conducted, comparing propofol and sevoflurane for LMA insertion in adults and concluded that induction time and insertion time was lesser with propofol. The number of attempts required for I-gel insertion and incidence of complications were similar in both groups. Hemodynamic responses were stable for both groups. They also mentioned that propofol is much superior in suppressing airway reflexes hence better facilitates I-gel insertion. In our study we could derive similar results while the haemodyanamic profile was much better with sevoflurane

Ganatra SB, D’Mello et al.6 studied the conditions for insertion of laryngeal mask airway between sevoflurane and propofol using fentanyl as a co-induction agent in adults. Excellent or satisfactory conditions were observed in all 30 patients inpropofol group and 29 out of 30 patients in sevoflurane group. The time taken for LMA insertion is shorter with propofol. Systolic and diastolic pressures were lower in propofol group. They concluded that although there was a faster induction with propofol- fentanyl, conditions for insertion were similar in both groups. Hemodynamic stability was better with sevoflurane-fentanyl while the propofol-fentanyl combination was more cost-effective. Though we did not study the cost effectiveness rest of our study results were similar to the above study.

Siddik SM et al7 conducted the study using sevoflurane-propofol and sevoflurane and propofol alone for laryngeal mask airway in adults and stated that the co-induction technique was the most reliable one with successful LMA insertion in first attempt and incidence of complications like apnea, PONV was reduced to a great extent. This might be attributed to the synergistic action of sevoflurane and Propofol and also the reduced requirement of Propofol which may cause reduced incidence of PONV.

In our study, 2 patients in sevoflurane group had laryngospasm while none in propofol group. Four patients in each group had gag reflex after removal of I-gel. Twenty eight out of thirty patients, in both propofol and sevoflurane groups, witnessed successful insertion of i-gel in first attempt. No patients complained of PONV in either groups.

Sarkar Mahajan et al8 conducted a study to compare Vital capacity breath inhalation with 8% Sevoflurane and Propofol for LMA insertion in adults. And stated that a vital capacity induction with sevoflurane resulted in faster loss of consciousness and also the time for successful LMA insertion in 1st attempt and the incidence of side effects were similar in both the group (P >0.05). While we conclude that I-gel insertion though better with propofol, Sevoflurane provides comparable conditions for I-gel insertion. The Sevoflurane when used using vital capacity induction technique provides comparable results to that of bolus injection of propofol. Hence provides minimum haemodyanamic variability and better acceptance by the patient due to sweet odour.

Takashi Kondo et al.9 compared Desflurane, propofol and sevoflurane and found that desflurane causes narrowing of the glottic opening and increased Peak inspiratory pressures when compared to Sevoflurane and Propofol during GA. So LMA insertion was more successful with with the use of Propofol compared to Sevoflurane.and Desflurane. Also this study summarises that among the inhalational induction agents sevoflurane provides the most optimal conditions as induction agent.

Kalapana S Vora et al10 in their study for sevoflurane versus Propofol in the induction and maintenance of anaesthesia in children with laryngeal mask airway hypothesized that Sevoflurane provided shorter time for LMA insertion, removal and recovery than IV propofol in children undergoing minor surgeries in below umbilicus, patients induced with Sevoflurane were more agitated. In our study we found that though hemodynamic stability is more with sevoflurane compared to Propofol. Also we can infer from this study that sevoflurane is a better alternative for induction agent in pediatric population.

Chhabra A et al11 in their study for use of I-gel for day care diagnostic laproscopic gynecological surgery to compare two regimens of IV Propofol with Dexmeditomidine or Butorphanol concluded that use of propofol with Dexmeditomidine provided better conditions for I gel insertion. This studies implies that Propofol when used in adjunction with opioids or alpha 2 agonists provides better conditions for insertion of supraglottic devices.

In our study we also studied the awakening after anaesthesia in both groups and found that sevoflurane provided better recovery in terms of early awakening, without complains of PONV and stable haemodyanamics. Patients also were comfortable in terms of no dizziness and were fully awake at the time of discharge. Thus I-gel insertion with sevoflurane induction seems to be a very good regimen for day care surgeries and fits well into ERAS protocol.12

There are certain limitations to our study, such as ASA III and IV were not included in the study. Also only one size i-gel was considered in all patients. Smaller sizes can be tried and used in patients with limitations in mouth opening. The data should also be confronted in pediatric population with studies having a larger sample size.

Patients who are susceptible to hypotension and bradycardia caused by propofol induction adequate preloading with crystalloids can increase the margin of safety and propofol can be safely used as inducing agent while maintaining hemodynamics.