Kalra and Gupta: Anaesthetic challenges and difficult airway in a child with Poland’s syndrome

Introduction: Poland’s syndrome is an uncommon clinical disorder with a typical musculoskeletal deformity of thorax and ipsilateral upper limb with a variable spectrum of associated anomalies. Although patients of this musculoskeletal disorder have several features with potential anaesthetic risks including malignant hyperthermia, previous reports about anaesthetic management of these patients are limited.

Case Presentation: We report the successful anaesthetic management of a child of Poland’s syndrome posted for surgical correction of club foot who had an anticipated difficult airway alongwith unilateral chest wall defect with paradoxical breathing and ipsilateral syndactyly and hence, posing challenges in the insertion of endotracheal tube, ventilatory management, regional anaesthesia and prevention of any risk of development of malignant hyperthermia.

Conclusion: Paramount in the anaesthetic care of such patients is a thorough preoperative evaluation and a cautious intraoperative anaesthetic management. Avoidance of halogenated inhalational agents and depolarising neuromuscular blocking drugs, and use of controlled ventilation and regional anaesthetic techniques are recommended. The possibility of a compromised airway should always be kept in mind while anaesthetising these patients.

Poland’s syndrome is an extremely rare congenital anomaly with an estimated incidence of 1 in 30,000 to 1 in 80,000 live births with a predominantly male preponderance.1 The etiology of this condition is described to be an insult at the end of the sixth week of gestation due to interruption of embryonic blood supply causing hypoplasia of the ipsilateral subclavian artery.2 Most of the cases seen are sporadic in occurrence with only around 20 patients reported to have a familial transmission.3

The syndrome is classically characterised as a constellation of congenital anomalies involving musculoskeleton of the thorax and ipsilateral upper limb. It includes variable degrees of hypoplasia of pectoralis minor and its nerve supply, chest wall depression with sternal anomalies, aplasia or hypoplasia of breast and nipple and limited subcutaneous fat. Upper limb anomalies are an important component of this syndrome classically presenting as brachysyndactyly. It is mostly unilateral and more commonly involves the musculoskeletal system of right side of the thorax and the right upper limb.4 The condition has also been called as ipsilateral thorax syndrome, limb/body-wall defect, fissure thoracis lateralis, pectoral-aplasia dysdactylia syndrome or unilateral chest-hand deformity in view of the body parts affected.5

In addition to these typical characteristics of this syndrome, there are reports of associated anomalies in many organ systems like club foot, hemivertebrae, scoliosis, hypospadias, inguinal hernia, renal malformations, cardiovascular defects and hematopoetic abnormalities.6 These patients frequently require anaesthetic care during various operative procedures for the correction of orthopaedic deformities, repair of chest wall defect or for other organ system diseases associated. Adults with Poland’s syndrome present for cosmetic surgeries like breast reconstruction. So far, number of reports describing the anaesthestic care of children with Poland’s syndrome are scarce.5, 7, 8, 9, 10 We report the anaesthetic challenges faced during the management of a child of Poland’s syndrome with a difficult airway operated for lower limb surgery.

A four-year-old boy weighing 16 kgs was scheduled for bilateral tenotomy and Joshi's external stabilizing system (JESS) application. The child was a case of bilateral congenital talipes equinovarus (CTEV) (Figure 1) with Poland’s syndrome. Child had dismorphic facies with a depressed nasal bridge and bulbous nasal tip with a depressed right angle of mouth. Intercanthal distance was increased and his eyes were deep set. There was history of developmental delay. On examination, there was poor development of right anterior chest wall musculature and nipple (Figure 2) alongwith a depressed sternum. Paradoxical respiratory movements could be seen which exacerbated upon deep inhalation and during stress. His right hand was hypoplastic with partial syndactylisation of second and fourth webspaces (Figure 3). Spine showed scoliosis and there was fullness in the caudal region. Heart auscultation was normal and examination of other systems did not reveal any abnormality. 2-D echocardiography was normal and laboratory investigations were also within normal limits. The family history was not significant. The child was earlier operated for tendoachilles lengthening with bilateral posterior release four years back. According to the information obtained from previous medical records, the trachea could not be intubated even after several intubation attempts performed by experienced anaesthesiologists, who were not able to visualize any laryngeal structures and managed to secure the airway with proseal laryngeal mask airway of size 2. Caudal epidural also was difficult but the anaesthesiologists managed to administer ultrasound guided caudal block and found a high lying sacral hiatus. 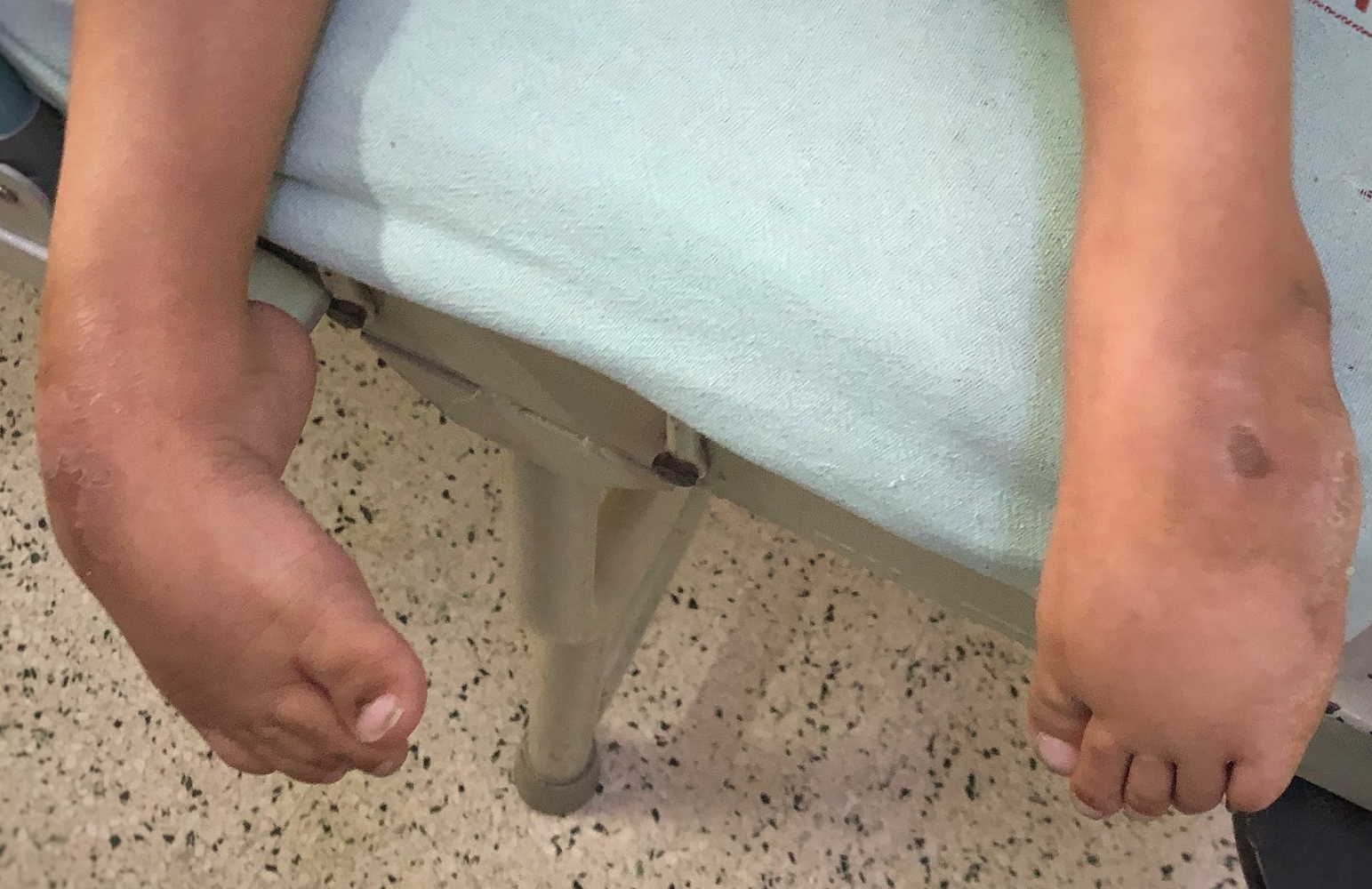 Deformity in right side of thorax (marked with arrow) 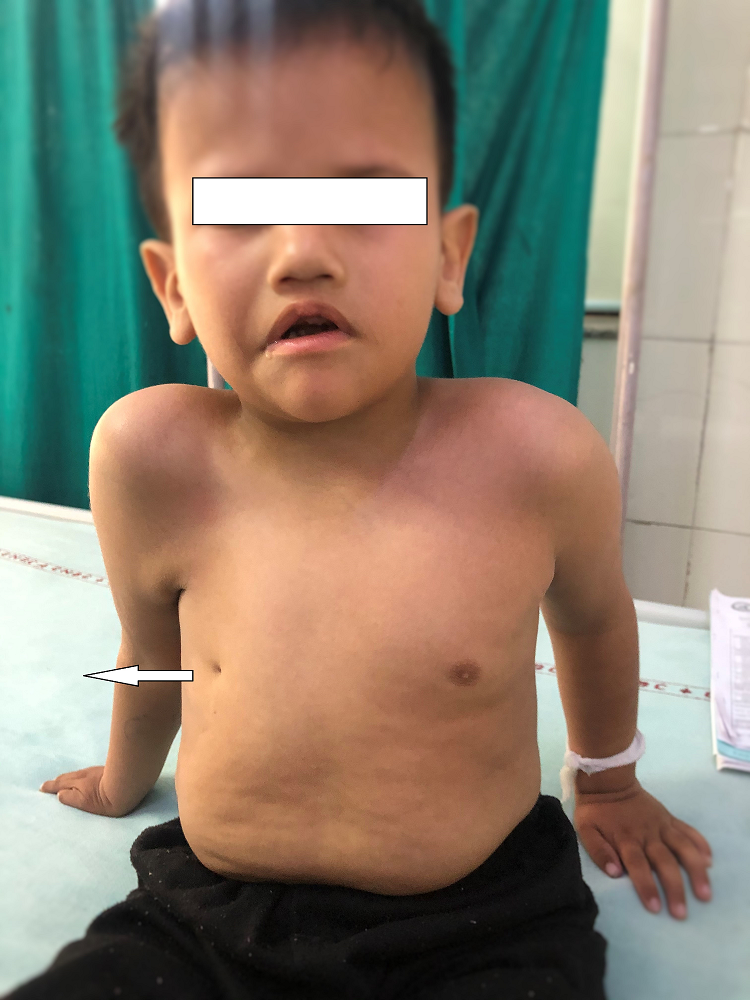 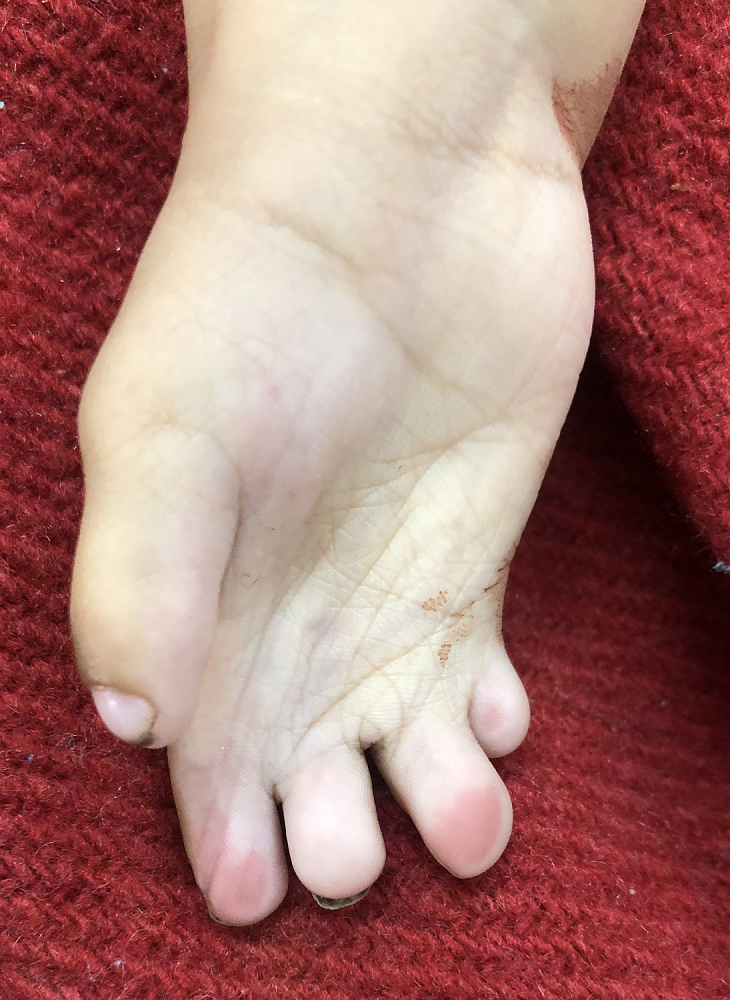 Preopertively the child was kept fasting for 8 hours. A consent was taken for an anticipated difficult airway and tracheostomy consent was also obtained. The patient was comfortable at rest and a 24G intravenous (iv) cannula was inserted in the preoperative room in presence of his parents. In the operation theatre, a difficult airway cart with different size airways, laryngoscopic blade, endotracheal tubes, video laryngoscope, tracheostomy tray and fibreoptic bronchoscope was kept ready. His baseline heart rate was 126/minute, non invasive blood pressure was 122/78 mm Hg, respiratory rate was 30/minute and pulse oximetry saturation was 100% on room air. Dexmedetomidine was administered iv in a bolus dose of 1 µg/kg diluted in 50 ml of ringer lactate solution over 10 minutes. Injection (inj) glycorpyrrolate 0.01 mg/kg iv and inj midazolam 0.04 mg/kg were given as premedication. Anaesthesia was induced with oxygen and slow titrated doses of inj ketamine 1 mg/kg iv and propofol 2 mg/kg iv. Videolaryngoscopy performed with macintosh blade size 2 during deep spontaneous ventilation confirmed a Cormack–Lehane Grade 2b and tracheal intubation was successfully done with endotracheal cuffed tube of size 5.0 with the help of a soft stillette and adequate backward pressure on the cricoids cartilage. After confirming correct tube placement, inj vecuronium 0.1 mg/kg iv and inj fentanyl 2 µg/kg iv were given. Epidural catheter was inserted in the L3-L4 space and bolus dose of 5 ml 0.25% bupivacaine was given after a negative test dose response. For the maintainence of anaesthesia, 50% oxygen and nitrous oxide mixture was administered and iv infusions of dexmedetomidine and propofol infusions were started at rates of 0.2 µg/kg/hr and 10 mg/kg/hr respectively. Bolus doses of inj vecuronium 0.02 mg/kg iv were given at intervals of 30 minutes. Surgery lasted for two hours and infusions were slowly tapered at the end of procedure. Patient was extubated awake after return of adequate neuromuscular power with inj neostigmine 0.05 mg/kg and inj glycopyrrolate 0.01 mg/kg iv. Throughout the surgery, patient remained hemodynamically stable with no episodes of desaturation. The patient was comfortable and pain free in the post operative period and was discharged the next day after an uneventful hospital stay.

The patients of Poland’s syndrome present a variable spectrum of congenital anomalies which have multiple implications for peroperative anaesthetic management, most notably that of ventilatory management, establishing a secure airway and possible risk of malignant hyperthermia.

Preoperatively, a thorough multisystemic examination is essential to diagnose the associated comorbidities. Apart from the baseline haematological investigations, a chest radiograph, arterial blood gas analysis and echocardiographic examination should be done to evaluate cardiorespiratory anomalies. A detailed airway examination is necessary so as to anticipate any difficulties in advance.

The presence of chest wall defect in these patients leads to indrawing of the chest wall in that area during inspiration and the opposite occurs while the patient expires, hence causing paradoxical respiration. Under stress, spontaneous breathing may result in fatigue of respiratory muscles with already reduced respiratory muscle strength leading to cardiopulmonary collapse. Also, the lung at the side of thoracic deformity may also be small or hypoplastic. So, to avoid any mishaps with spontaneous respiration, controlled positive pressure ventilation is mandatory for these patients during the intraoperative period. In order to prevent any worsening of the respiratory embarrasement due to pain in the postoperative period, proper pain management is prudent in these patients by a multimodal technique. Our patient also had paradoxical breathing which worsened on deep breathing and under conditions of stress. Hence, positive pressure ventilation was chosen via an endotracheal tube during the surgery after administering neuromuscular blocker. For effective analgesia, we administered epidural blockade with local anaesthetics via a 19G catheter placed in L3-L4 space in the epidural space in addition to intravenous opioid, dexmedetomidine and paracetamol.

Secondly, due to congenital nature of the disease characterised by defect in muscular development, difficulties are anticipated on laryngoscopy and optimal view of the glottis may not be obtained while securing the airway with an endotracheal device.10 In our patient, there was confirmed history of unsuccessful intubation during the previous surgery which was obtained from his parents and also from the medical records. So, important decisions about whether to proceed and how to proceed were required and also, it allowed the anaesthesiologist to discuss the concerns with the parents and the surgeons. Management of the airway requires a primary plan and multiple backup plans. We were well equipped with our difficult airway cart prior to induction and could successfully intubate trachea of our patient using an oral styletted endotracheal tube with the help of videolaryngoscope while applying backward pressure on the cricoid cartilage.

There is possible appearance of a malignant hyperthermia in patients of Poland’s syndrome due to involvement of musculoskeletal system.5 This demands the anesthesiologist to take certain preventive measures. Hence, during managing this case, we did not expose the patient to halogenated inhalational agents, and instead carried out a non triggering anaesthetic technique with fentanyl, dexmedetomidine, propofol and non depolarising neuromuscular blocking agents. Throughout the intraoperative period, continuous monitoring of body temperature and EtCo2 monitoring was performed for early detection of development of malignant hyperthermia.

We described the cautious anaesthetic management of a child of Poland’s syndrome with a history of unsuccessful intubation during his previous surgery and now underwent CTEV corrective surgery under general anaesthesia with an uneventful intraoperative course. General anaesthesia with controlled ventilation and proper pain management with continuous intraoperative monitoring can be safely used in these patients for corrective surgeries of associated anomalies. Any anaesthetic technique employing halogenated inhalational agents or succinylcholine can be fatal in such patients.