Deshpande, Kale, Godbole, and Phalke: Anesthetic management of an achondroplastic dwarf with difficult airway and kyphoscoliosis for total abdominal hysterectomy

Achondroplasia is a common form of dwarfism and possesses multiple anesthetic challenges including securing of intravenous line, monitoring and calculating drug dosage, spine abnormality, difficulty in mask ventilation and endotracheal intubation, obesity, cardiopulmonary and neurological system abnormality. There is multiple systems involvement, therefore thorough preanesthetic check ups, investigations and planning for anesthesia is important. Here we came across 36 years old female patient, achondroplasic dwarf (height- 100cm) with thoracolumbar kyphoscoliosis, fused cervical spine, short neck and restricted neck movement with mild pulmonary restrictive disease for total abdominal hysterectomy. Patient also had complained of generalized weakness and fatigue. She had a limited neck extension and short neck possesses anticipated difficult intubation, therefore we planned awake fiberoptic intubation with smaller size endotracheal tube for airway management and general anesthesia in a patient with difficult airway and spine for total abdominal hysterectomy. As the spread of the drug in regional anesthesia is unpredicted, we planned general anesthesia with awake fiberoptic intubation to avoid the risk of neurological injury while extending the neck during laryngoscopy for tracheal intubation due to restricted neck movement.

36 years old, female patient, case of achondoplastic dwarfism had a uterine fibroid with heavy per vaginal bleeding posted for total abdominal hysterectomy. She stands 100cm and weighted 33 kg (BMI-33kg/m2). Patient had dyspnoea on exersion MMRC grade I since childhood. Achondroplasia was associated with thoracolumbar kyphoscoliosis, fused cervical spine, short neck and restricted neck movements with mild pulmonary restrictive disease. She did not have any significant past history of chronic illness or any surgeries. 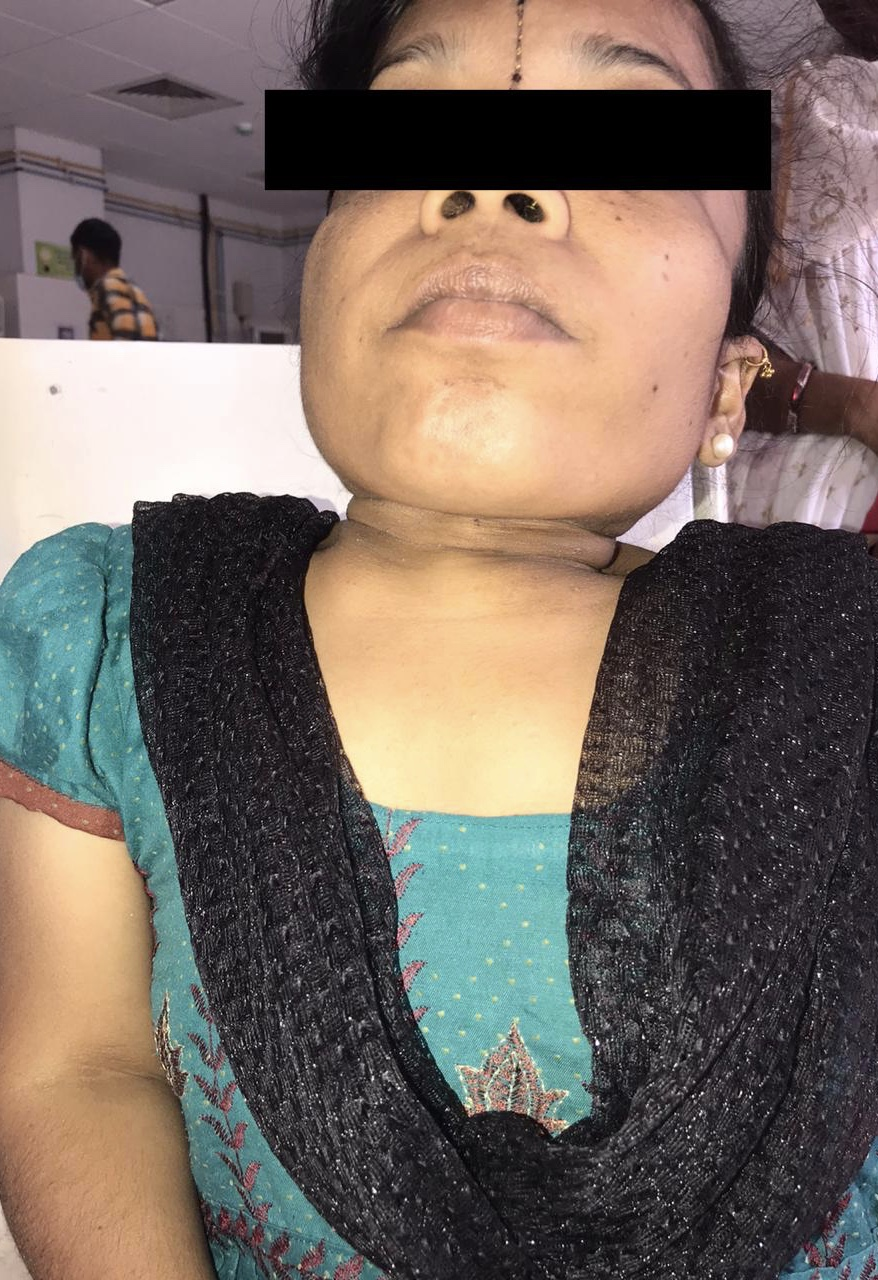 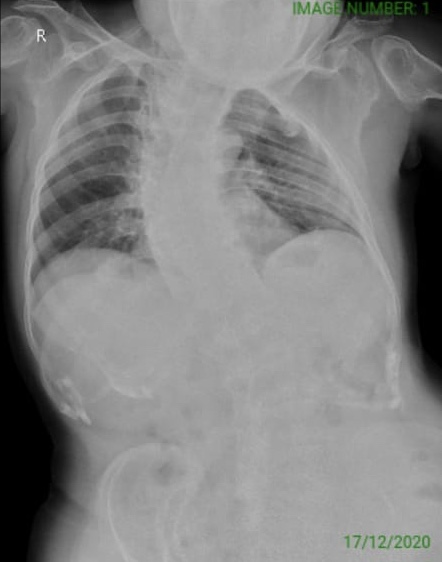 Inj.Glycopyrrolate 0.2mg intramuscularly was given 30 mins before induction in preoperative room, xylometazolin 0.1% nasal drops were given in both nostrils. Inj.Dexamethasone 0.2mg/kg IV and Inj.Hydrocort 2mg/kg IV given preoperatively. Difficult airway cart was prepared and toxic dose of local anesthetic was calculated. She was nebulised with topical lignocaine 4% 2ml followed by spraying of the base of tongue and posterior pharyngeal wall with 10% lignocaine before procedure. Inj. Dexmedetomidine 0.4mcg/kg IV given before procedure. Superior laryngeal nerve block were given with inj.Lignocaine 2% 1.5ml on both sides & transtracheal block given with inj.Lignocaine 2% 4ml. Before insetion of fiberoptic bronchoscope patency of the nostrils were checked. Patient was oxygenated with nasal airway with 6 mm connector from opposite nostril by bains circuit (Figure 3). Awake fiberoptic nasal intubation was done using spray as you go technique with maintaining cervical spine stability throughout and intubation was successful in first attempt. After securing the airway, intravenous induction was done with Inj.Propofol 2mg/kg IV and Inj.Vecuronium 0.1mg/kg IV and patient was taken on mechanical ventilator. Inj. Fentanyl 2mcg/kg IV & Inj. Paracetamol 15 mg/kg IV given as an analgesia. Surgery was lasted for 2 hours. Blood loss was minimal. Patient was hemodynamically stable throughout the procedure. She was reversed with Inj.Neostigmine 0.05mg/kg IV and Inj. Glycopyrrolate 8mcg/kg IV and extubated uneventfully. She was shifted to postoperative care unit. Postoperative analgesia was maintained with inj. Paracetamol 15 mg/kg IV TDS. 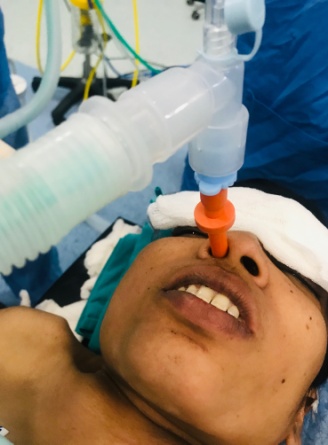 Achondroplasia is the most common cause of dwarfism caused by gain of function mutation in fibroblast growth factor receptor 3 (FGFR3) gene. 80% mutations are the result of sporadic mutation while 20% are autosomal dominant. Incidence is approximately 0.5-1.5 in 10,000 newborns.1 Females are more affected than the male.2 Clinically, characteristic symptoms of disproportionate dwarfism is relative large head, midfacial hypoplasia. Achondroplasia affects multiple systems, primary or secondary to consequences of other organ systems affected.

A general recommendation regarding the ideal anaesthetic technique cannot be given, as both general and regional anaesthesia present potential problems.3 Therefore, individual decisions are necessary.

Despite of all these problems during general anesthesia, we preferred general anesthesia over regional, due to the anatomical changes in the spine and the craniocervical junction as well as an increased incidence of hydrocephalus, spinal anesthesia is relatively contraindicated.

Neuraxial regional anesthesia is considered to be technically difficult due to narrow spinal canal/stenosis, reduced epidural space, kyphoscoliosis, vertebral body deformities.12 There are chances of potential neurological failures after regional anesthesia. In some cases, epidural anaesthesia was carried out successful. There are reports about accidental dural punctures, increased risk of venous puncture,13 difficulties in advancing the catheter, irregular or unpredictable spread of anesthesia.13 Epidural anesthesia should be preferred because of the possibility of titration. The conus medullaris is often positioned lower than usual.14 In most cases, injection of local anaesthetic into the caudal canal is easier in the case of paediatric patients.

Also spinal anesthesia even when applied successfully,15 carries the risk of failure of block as a result of unpredicted spread of the subarachnoid block due to anatomical deformity of spine.

While performing awake fiberoptic intubation, it is important to allay the anxiety of patient as these patients are highly anxious, we gave dexmedetomidine intravenously before procedure with vitals monitoring. Dexmedetomidine is a highly selective alpha 2 adrenoreceptor agonist and has a several unique properties, including sedation, anxiolysis, analgesia, hemodynamic stability and easy arousability. Dexmedetomidine demonstrates minimal respiratory depression16 even at a higher doses and also decrease salivary secretions, which are desirable during awake FOI.

Greatest care is required to prevent damage caused by positioning in case of anatomical abnormalities like khyphoscoliosis, lower limb valgus deformity, joint contractures and some patients are not able to lie supine.17 There are incidence of brachial plexus injuries during positioning in these patients. Case reports on damages caused by positioning do exist (e.g. two cases of brachial plexus palsy).18 Therefore we kept pillows underneath bilateral lower limb as a patient had joint contractures.

Compared to the size of the body, the head is relatively large & because of increase in body surface area they are more prone for hypothermia. Therefore, temperature monitoring and prevention of hypothermia is important in these patients.

Therefore in our case, we planned awake fiberoptic intubation as she had predicted difficult airway and to avoid neurological injury due to cervical spine extension during laryngoscopy, with all preoperative preparation for difficult mask ventilation and difficult intubation.