Kalarthi and Desai: Norepinephrine versus phenylephrine for maintenance of blood pressure during spinal anaesthesia for caesarean delivery - A randomized double blind controlled study

Introduction: Currently phenylephrine is a preferred 1st line vasopressor for maintenance of blood pressure during spinal anaesthesia, may be associated with reflex bradycardia and decreased cardiac output, posing risk to mother or foetus. Norepinephrine may be an useful alternative as being potent alpha with weak beta adrenergic agonist activity.

Aims: This study compared the effectiveness of prophylactic and treatment boluses of norepinephrine and phenylephrine to maintain systolic blood pressure at or above 80% of baseline value during spinal anesthesia for cesarean delivery with the primary aim to compare cardiac output. Secondary aims were total doses of study drug required, neonatal outcome and perioperative complications.

Results: Both the drugs were able to maintain the systolic blood pressure ≥ 80% of baseline (p=0.356). Significant difference observed in cardiac output while comparing both the groups from 3 to 15 minutes after spinal anesthesia (p=0.014). The incidence of bradycardia was lower in norepinephrine group as compared to phenylephrine group (P=0.018).

Conclusion: Norepinephrine is as effective as phenylephrine for maintenance of blood pressure after spinal anaesthesia for caesarean delivery with stable heart rate and cardiac output.

Maternal hypotension after spinal anaesthesia can lead to serious sequelae including nausea, vomiting, cardiovascular instability, decreased utero placental circulation and foetal acidosis.1 After declaration of phenylephrine as first line vasopressor in 2010 review, it is being regularly used to maintain blood pressure during spinal anaesthesia in parturient. Being a potent α1 receptor agonist, reflex bradycardia followed by decreased cardiac output is associated with its use. Although, the clinical outcome lead by this reduction in heart rate and cardiac output in healthy parturient with unstressed foetuses is unknown, potential harm in the presence of a compromised foetus will raise the concern. Therefore, investigation of alternative vasopressors with less striking negative chronotropic effect is of interest.

Norepinephrine having strong α adrenergic with weak β adrenergic activity, can be an effective vasopressor for maintaining blood pressure during spinal anaesthesia with less tendency to reflex decline in heart rate and cardiac output.1, 2, 3, 4 Conceptually, this may be more favourable for maintaining perfusion to the utero placental as well as peripheral vascular bed. The safety profile of norepinephrine for foetus is another concern but it does not readily cross the placenta.2, 5, 6

This study compared the effectiveness of prophylactic and treatment boluses of norepinephrine and phenylephrine to maintain systolic blood pressure at or above 80% of baseline value during spinal anaesthesia for caesarean delivery with the primary aim to compare the cardiac output. The secondary aims were total doses of study drug required, neonatal outcome and perioperative complications.

The present prospective randomized, double blind controlled study was carried out after taking permission from the Scientific Research Committee and Institutional Ethics Committee for Human Research and registration in Clinical trials Registry of India (CTRI/2018/10/016008) between the period of September 2018 to October 2019. After written informed consent to participate in study, 100 patients of 18-30 years of age group, having singleton, full term pregnancy, American Society of anaesthesiologist physical status (ASA) II posted for elective caesarean section under spinal anaesthesia were included in the study. Exclusion criteria included patients with contraindications to spinal anaesthesia, allergy to study medication, known foetal abnormality, hypertension, arrhythmia and morbid obesity.

Patients were randomly assigned to two groups [Group N- norepinephrine 6 µg (Adrenor, 2mg/ml, Samarth) and Group P – phenylephrine 100 µg (Phenpres, 10mg/ml, Neon)] by using computer generated random numbers and the assignment was sealed in opaque envelopes. For ensuring blinding, identical 10 ml coded syringes of drugs with 1ml being required study dose (100µg/ml or 6µg/ml), will be prepared under the guidance of consultant by one of the fellows, who will not participate in performing subarachnoid block or recording the outcome during intraoperative and postoperative periods. The syringe will be labelled as “study drug.” The patient and the observer will be blinded to the content of the drugs. 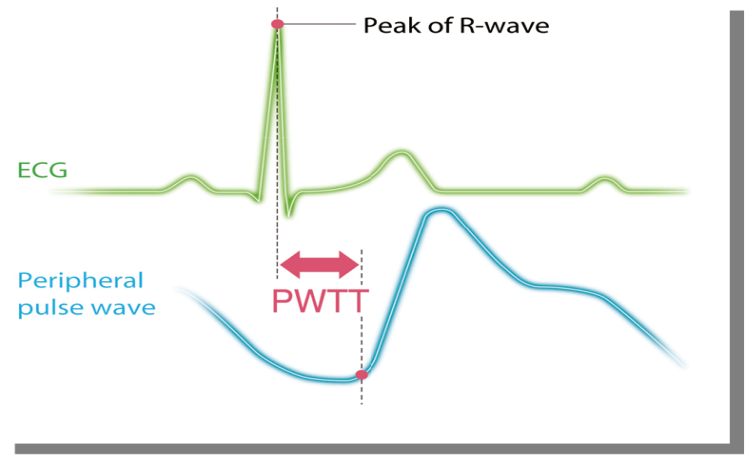 All parturient were premedicated with intravenous ranitidine 0.5-1 mg/kg and ondansetron 0.08 mg/kg. They were preloaded with ringer lactate solution 10ml/kg 15 min before induction. Spinal anaesthesia was given in L3–L4 intervertebral space under all aseptic precaution, in lateral decubitus position. After confirmation of free CSF flow, bupivacaine (0.5%) 2 ml was injected intrathecally. Monitoring was started immediately on making the patient supine and prophylactic bolus dose of study drug was given intravenously. Non-invasive blood pressure and cardiac output monitoring were started immediately after intrathecal injection, and the automatic cycling time was set to 2 minutes until delivery and then every 15 minutes till the end of surgery. Heart rate was recorded at the time of completion of each blood pressure measurement. ECG and SpO2 were measured continuously.

Whenever there was fall in blood pressure (fall in SBP > 20% of baseline value or SBP < 90 mm Hg), the study drug dose was repeated and at the end, total dose requirement was calculated. Intra operative bradycardia (HR<50beats/min) was treated with atropine 0.6 mg intravenously. Nausea, vomiting and other maternal undesired effects were noted and managed accordingly. Apgar score was assessed for neonatal outcome and noted down at 1, 5 and 10 minutes after delivery.

Data generated from pilot study, was used to calculate the sample size. The CO between two groups at 5 minutes was 7.24± 1.78 vs 6.59±1.36, the mean difference being 0.75lites/minute. Assuming two-sided alpha error 0.05 and power of 90%, sample size required was 94. We studied 100 patients considering the dropouts. Statistical analysis was done using Microsoft Excel 2010 and MedCalc version 12.4.3.0. Parametric data are presented as Mean±SD and non-parametric data as frequency or percentage. Univariate intergroup comparison was done using unpaired student ‘t’ test and non-parametric data was compared using Chi-square test. P value < 0.05 was considered as significant.

Out of 109 tested for eligibility, total 100 patients were enrolled in the study. 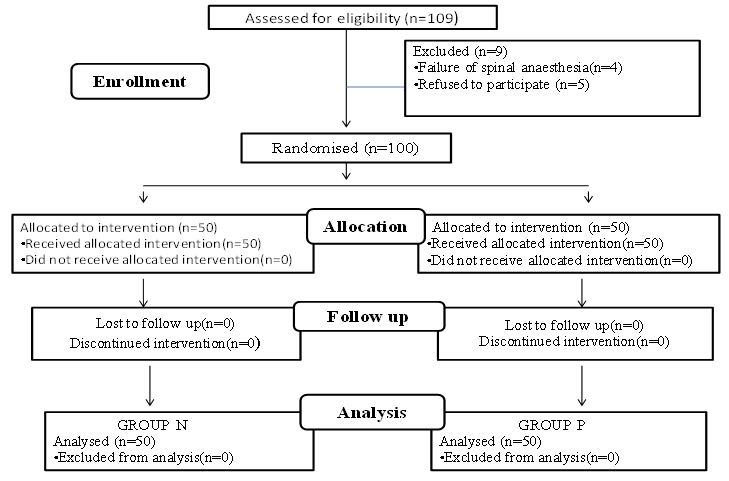 Recruitment of patients and flow are shown in Figure 2.

Patient characteristics and surgical time were similar between the two groups. (Table 1)

Both the drugs were able to maintain the systolic blood pressure following spinal anaesthesia throughout the surgery (p=0.356). (Figure 3)

In group N, no changes observed in CO while in group P, it decreased from 3 minutes to 15 minutes, with maximum fall after 5 minutes and then after maintained till the end of surgery (p<0.05). Comparing both the groups, CO remained less in patients with phenylephrine group than norepinephrine group for 3 to 15 minutes after spinal anaesthesia (p=0.014). Then after, it was comparable in both the groups. (Figure 4) 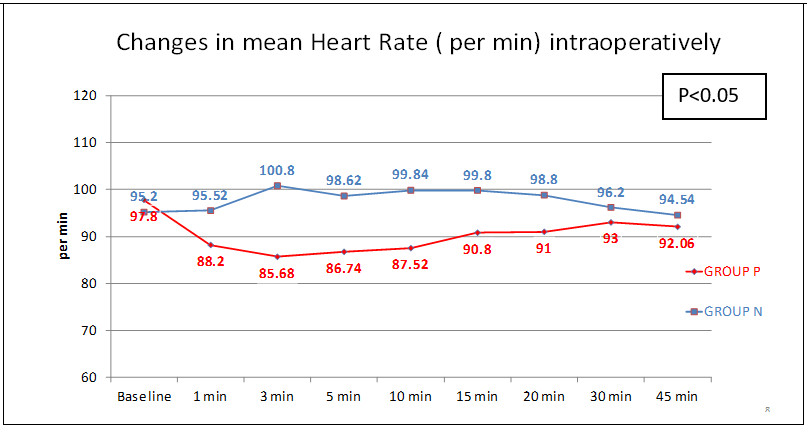 In group N, not a single patient developed bradycardia, whereas in group P, bradycardia was observed in 7 patients (p=0.018). The incidences of nausea/vomiting were comparable between the two groups. No other maternal perioperative complications were observed in both the groups. (Table 1)

Both norepinephrine and phenylephrine, maintained blood pressure following spinal anaesthesia, but it was associated with fall in CO from 3 minutes till 15 minutes with highest fall at 5 minutes after spinal anaesthesia and with episodes of bradycardia in patients with phenylephrine group. Meanwhile, CO and HR were well maintained in patients with norepinephrine group.

Uteroplacental blood flow is not auto regulated but directly coupled to maternal blood pressure, maternal hypotension must be treated immediately to avoid risk of foetal acidosis. Use of vasopressors, given their arterial vessel constriction property, is rational and advocated to rescue spinal anaesthesia induced hypotension. Being pure α adrenergic agonist, arteriolar vasoconstriction due to phenylephrine increases systemic vascular resistance (SVR) and often causing baro-receptor mediated bradycardia associated with decreased CO.2, 3, 4, 7, 8 In capacitance vessels, such vasoconstriction may increase venous return, however simultaneous increase in venous resistance limits venous return to the heart.7, 9 Norepinephrine having strong α-adrenergic agonist activity and a mild β-adrenergic agonism, is routinely used to treat anaesthesia-induced vasodilatation by increasing SVR as often accompanied by stable CO and HR.1, 2, 3, 4 Nor-epinephrine acts on β1 receptors in the myocardium which results into increase in contractility and HR leading to effective treatment of hypotension with preservation of CO. Though, direct α1 stimulation produces intense vasoconstriction with a resultant increase in SVR, venous return to the heart is increased via veno constriction due to stimulation of venous α1 receptors with norepinephrine.10

We used non-invasive CO monitoring based on esCCO measurement system. It is reliable and having good CO measurement accuracy equivalent to CO measured by pulmonary artery catheter.11 According to literature, apparently the CO and uteroplacental perfusion can’t be accurately judged by monitoring of blood pressure alone. Therefore, ideal haemodynamic for caesarean delivery should be aiming for both maternal and foetal well-being through maintenance of blood pressure to ensure adequate flow through the low resistance uteroplacental unit, also without compromising the CO which is a key to O2 delivery.10 Studies have denoted similar maternal and foetal outcome using norepinephrine and phenylephrine including similar umbilical blood gas values in healthy parturient.6, 10 Future research is required to demonstrate whether greater utero-placental blood flow and oxygen delivery is associated with the use of norepinephrine compared to phenylephrine, particularly in conditions of compromised cardiac functions or uteroplacental perfusion, like preeclampsia or intrauterine growth retardation.

In both the groups, Apgar score of all neonates remained >7. Due to breakdown of catecholamines by placenta, both the vasopressor drugs do not rapidly cross the placenta. Studies demonstrated higher foetal pH with the use of phenylephrine compared to ephedrine.12, 13, 14, 15, 16 Reduced foetal catecholamine level with the use of norepinephrine compared to phenylephrine, eliminates possible stimulation of foetal metabolism and acidaemia regularly seen with ephedrine.4, 6, 7

In our study, both the vasopressor drugs were administered by bolus dose. Infusion regimen requires either smart pumps or more physician intervention as well as a bit more time consuming. Bolus dose administration is easy to execute and clinically practice. Most of the clinicians favour the use of intermittent boluses rather than infusions.3, 10, 17, 18 Ngan Kee et al. used closed loop computer- controlled infusions to deliver both the vasopressor drugs which possibly can reduce bias that might emerge with manual infusion.6 Work in future required to evaluate the efficacy of norepinephrine given by manually controlled infusion and intermittent boluses in obstetric patients.

We decided to give prophylactic dose of vasopressor immediately after giving spinal anaesthesia as recent studies suggested increasing the SVR as a better approach to prevent haemodynamic instability after spinal anaesthesia.3, 10, 19 Requirement of bolus doses were similar in both the groups. Ore results are in consonance with Ling dong et al in this regard.3 While, Nitu Putheneettil observed less requirement of bolus doses with norepinephrine compared to phenylephrine group.18

Different potency ratio of norepinephrine to phenylephrine was demonstrated by different studies like 20:1,6 16:1,2 13:1.4 11:317 comparing 5µg, 6µg, 8µg and 9µg against 100µg of phenylephrine. In all the studies, norepinephrine was depicted as effective as phenylephrine in managing maternal hypotension after spinal anaesthesia without any detrimental effects on foetus and mother. Onwochei et al. determined the ED 90 dose of norepinephrine through an up-down sequential allocation study to be 5.8 µg to prevent and treat post-spinal maternal hypotension. While Ngan Kee in a recently published study justified 8µg dose of norepinephrine through a random allocation graded dose response study.2, 4 Difference between two remained by Onwochei et al primarily used norepinephrine to prevent whereas Ngan Kee used it to treat the hypotension.2, 4 We believe, it was reasonable to use norepinephrine in ED 90 dose (6µg) as a prophylactic and treatment which falls within the range of equipotent dose determined by Ngan Kee.4

Norepinephrine induced vasoconstriction and skin necrosis is another concern for its use in peripheral veins as bolus. But similar risks would remain when diluted solutions of norepinephrine are used equivalent to vasoconstrictor potency of phenylephrine in commonly used concentrations.1, 2, 4, 6, 7 Moreover, we used antecubital vein and each dose was thoroughly flushed with running ringer lactate solution.

The limitation of our study included lack of umbilical cord blood analysis to evaluate neonatal outcome. Though we look for Apgar score, umbilical blood gas analysis would have been more informative.

WDN Kee KS Khaw Vasopressors in obstetrics: what should we be using?.Curr Opin Anaesthesiol20061923843