Aim: To assess the effect of acupuncture on pre-operative anxiety levels in patients undergoing surgery under general anaesthesia.

Materials and Methods: A total of 240 patients undergoing surgery under general anaesthesia will be included in the study. Patients will be randomized in to two groups. Group A: Patients receiving acupuncture at EX-HN3 (Yintang) point. Group B: Patients not receiving acupuncture. At the pre-operative visit, on the day of surgery before and after acupuncture therapy, the patient will be assessed for anxiety scores using.

Pre-operative anxiety is defined as a ‘‘persistent feeling of dread, apprehension, unpleasant state of psychological distress or tension and uneasiness’’.1 Anxiety before undergoing surgery is experienced by approximately 60–70% of adult patients.2, 3 Sympathetic and parasympathetic nervous system, stimulated by preoperative anxiety results in tachycardia, hypertension and cardiac adverse events like arrhythmias. It also stimulates endocrine system, there by 40% increase in plasma adrenaline level and electrolyte imbalance leading to negative consequences during intra operative and postoperative periods.4 Preoperative anxiety is associated with increased postoperative pain, drug requirement, post operative nausea and vomiting and duration of hospital stay.5

Different techniques used to relieve it have gained considerable attention. The traditional approach to reduce preoperative anxiety includes pharmacological anxiolysis with opiods, benzodiazepines, barbiturates, neuronal Kv7 channels stimulants like Flupirtine etc.6, 7 Due to the limitations such as overuse, side-effects, tolerance and dependence of conventional pharmacotherapy, the non pharmacological methods like behavioral interventions such as patient counseling, distraction, attention focusing, psychological interventions, music, audiovisual intervention, yoga and relaxation procedures are adopted.8, 9 Acupuncture is an effective non pharmacological tool and its efficacy and safety for treating various mental and physical disorders have been studied. Hence in an attempt to reduce pre-operative anxiety without having any side effects, this study was performed to assess the influence on pre-operative anxiety levels in patients undergoing surgical procedures by using acupuncture at EX-HN3 (Yintang) point.

To assess “effect of acupuncture on pre-operative anxiety levels in patients undergoing surgery under general anaesthesia”.

The sample size formula is based on ‘’mean and

With these values the sample size obtained is 240.

After obtaining ethical committee approval and written informed consent, a total of number of 240 patients undergoing surgery under general anaesthesia were considered for the study. After having met inclusion and exclusion criteria and having obtained informed consent, patients were randomized based on computer generated randomization table in to two groups.

Group B: (120 Patients) Patients who did not receive acupuncture.

Using a self evaluation questionnaire. They are, A. ‘’Shortened 6 items state trait anxiety inventory (STAI-S6)’’. B. ‘’Amsterdam pre-operative anxiety and information scale’’.

Each answer was awarded particular score which were added up, giving a aggregate score of 6-24. The final score was divided by 6 (total items) and multiplied with 20 to get an appropriate score between 20 and 80 for the need of comparison. (Table 2)

The response of patients to the questionnaire was assessed by five point Likert Scale, 1 representing “Not at all” and 5 as “Extremely”. Questions 1,2,4 and 5 of the questionnaire contained anxiety elements and scores of which were added up giving a aggregate score of 4-20.

The patients were retained in the pre-operative room for 40 minutes on the day of surgery and the patients in group A i.e, those receiving acupuncture therapy received acupuncture in single session that consisted of insertion of press-stud needle (0.2mm x1.5mm JIAVIAN) (Figure 1) at EX-HN3 (Yintang) point (Figure 2) and instructed to stimulate the needle manually in a small circular fashion every 10 minutes by applying a pressure to the press study. The needle was left insitu and after 30 minutes it was removed, where as the patients in a group B were retained in the pre-operative area for 30 minutes and left undisturbed, at the end of 30 minutes the patients in the both groups were asked to complete both questionnaires and vitals were recorded (HR, BP, RR). 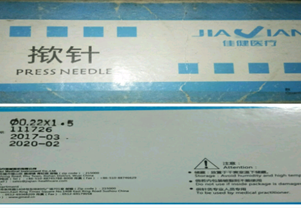 Location of the EX-HN3 (YINTANG) point 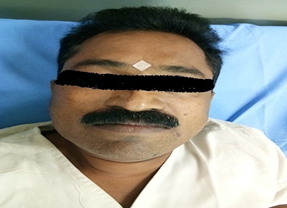 Student unpaired‘t’ test is used to calculate the significance of study in Inter group and for intra group analysis students paired ‘t’ test is used.

The statistical software namely SPSS 20.0, was used for the analysis of the data and to generate graphs and tables etc Microsoft word and Microsoft Excel have been used.

In total 240 patients recruited to the study were analysed for the primary outcome (Figure 4). The groups were comparable with respect to age, sex, weight and ASA status (Table 3). 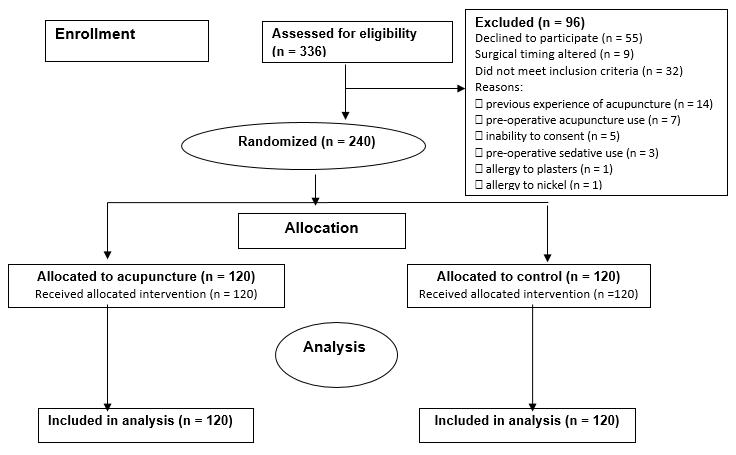 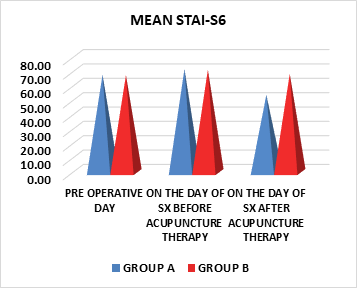 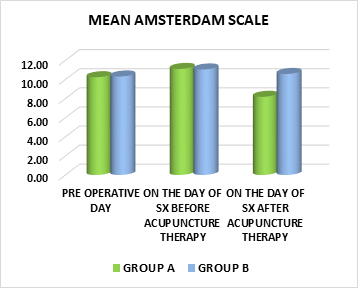 No adverse events were reported in any subjects who received acupuncture therapy.

Anaesthetic concerns associated with pre-operative anxiety on induction of anaesthesia correlates with increased time for the jaw relaxation, higher incidence of coughing, postoperative pain, increase in analgesic and anaesthetic requirements, delayed recovery and discharge from hospital. In addition, anxiety may adversely affect recovery and decreases patient’s satisfaction with peri-operative experience.12, 13

The etiology of preoperative anxiety is multifactorial, they are divided as14, 15, 16, 17

Acupuncture is the ancient Chinese science, on which various studies have been made. Most studies have shown that EX-HN3 (Yintang) point can be identified easily, be stimulated using a needle sticker or needle and is effective in reducing anxiety.

Our study has shown that 30 minutes of acupuncture at EX-HN3 point resulted in reduction in pre-operative anxiety levels as measured by objective criteria (HR, BP,RR) and subjective criteria(STAI-S6 and Amsterdam Scale) in patients undergoing surgery under General Anaesthesia. Pre operative anxiety levels as assessed by objective criteria (HR, BP, RR) have shown significant reduction in intervention group (P<0.001) compared to the control group (P=0.0556) which were similar to Huang and Tang (2009) who performed acupressure at EX-HN3 in Group A (n= 40) and did not perform any intervention in Group B (n = 40) and found heart rate (HR), systolic blood pressure (SBP), and diastolic blood pressure (SBP) at post intervention in the Group A (P< 0.01) were all significantly lower compared to Group B (P< 0.05).3

Exact mechanism of acupuncture by which it is exerting anxiolytic effect has to be determined. Decreased activity in amgydala and hypothalamus shown by functional MRI imaging.23 This is either due to direct ‘’central sedative effect or sympatholysis effect’’.

CH Tu I Macdonald YH Chen The Effects of Acupuncture on Glutamatergic Neurotransmission in Depression, Anxiety, Schizophrenia, and Alzheimer’s Disease: A Review of the LiteratureFront Psychiatry20191014