Materials and Methods: In this observational study 80 patients who underwent laparoscopic appendicectomy were divided into two groups of 40 each by random sampling. The patients in the GA group received general anaesthesia whereas patients in the GA+SAB group received intrathecal buprenorphine along with general anaesthesia. The heart rate, systolic and diastolic blood pressures and SpO2 were noted after induction of general anaesthesia, immediately after endotracheal intubation, after creating pneumoperitonium and post extubation. Student’s t test was used for comparing the haemodynamic variables

Results: There were no statistically significant differences between GA and GA+SAB group in the heart rate, systolic and diastolic blood pressure after pneumoperitonium was created.

The choice of anaesthetic technique for laparoscopic surgeries can be either general anaesthesia or spinal anaesthesia and this depends on factors like the patient selected, surgeon’s skill and anesthesiologist’s comfort.1, 2

Regional anesthesia technique for laparoscopic surgeries require a compromise in surgical conditions like relaxed and cooperative patient, low insufflation of carbondioxide to reduce pain, reduced table tilt, and gentle surgical technique which necessitates supplementation with intravenous sedation. The combined effect of pneumoperitoneum and sedation can lead to hypoventilation and arterial oxygen desaturation.3, 4, 5

Abdominal carbondioxide insufflations in laparoscopic surgeries elevate the intrathoracic pressure which remain the integral cause of haemodynamic changes.6 Also pneumoperitoneum along with tissue manipulation result in intense stimulation to the nervous system leading to corticosteroid and catecholamine release. This results in hemodynamic surge in the form of raised systemic vascular resistance, hypertension and tachycardia with raised serum cortisol level.7 This unopposed increase in systemic vascular resistance has to be managed by increasing anaesthetic concentrations and at times, administering vasodilators.8 Laparoscopic surgeries are usually done under general anesthesia with controlled ventilation to control the neuroendocrine stress response and to prevent hypercapnia.

Neuraxial drug administration describes the technique of delivering analgesics and adjuvant drugs in close proximity to the spinal cord with drugs like local anaesthetics, opioids, or adrenergic agonists.9 Buprenorphine is a long-acting lipid soluble mixed partial agonist μ opioid receptor modulater, which can be, administered intrathecally.10 It provides excellent analgesia intraoperatively and post operatively while allowing early ambulation without prolonged motor block and with lesser side effects. It is about 25 times more potent than morphine and has a low level of physical dependence.11

The study commenced after obtaining approval from the Institutional Ethics Committee (No.IEC/MES/22/2016). A written and informed consent was obtained from all patients. The study design was comparative observational longitudinal study.

According to medical records data in the study hospital regarding the number of laparoscopic appendicectomies done under combined spinal and general anaesthesia in the previous year, a sample size of 80 was arrived. 80 patients were divided into two groups of 40 each by random sampling. All of them belonged to Physical Status І or ІІ as outlined by the American Society of Anaesthesiologists (ASA). Patients with a body weight less than 40 kg, who refused regional anaesthesia, has known hypersensitivity to opioids and local anaesthetics, pregnant or breast feeding females and those with bleeding disorders were excluded from the study. Patients who participated in the study belonged to the age group of 18 – 55 years and underwent elective laparoscopic appendicectomy in the Department of Anaesthesiology in a tertiary referral hospital during the period from January 2017 to December 2017.

The principal investigator observed the procedure and had no role in the assignment of cases to different modalities of anaesthesia.

Routine monitoring included ECG, pulseoximetry (SpO2) and non-invasive blood pressure (NIBP). An intravenous line was secured on the right forearm using an 18 gauge cannula. After shifting the patient to the operation baseline values of heart rate, NIBP and SpO2 were recorded.

In GA + SAB group the patients were positioned left lateral to perform regional anaesthesia. Under strict aseptic precaution and after injecting 2ml of lignocaine 2% at the site, lumbar subarachnoid space was reached with 25G Quincke needle in L3-L4 intervertebral disc space via median approach. 60μg (0.2ml) of buprenorphine with 1 ml normal saline 0.9% will be injected into the subarachnoid space after confirming the free flow of cerebrospinal fluid through the needle.

After making the patient supine, general anaesthesia was given. Patients were premedicated with midazolam 0.02 mg/kg and glycopyrrolate 0.005 mg/kg. Fentanyl 2μg/kg was given as the analgesic. After preoxygenation with 100% O2 for 3 minutes, anaesthesia was induced with propofol 2 mg/kg. Neuromuscular blockade to facilitate oral cuffed endotracheal intubation was done with succinylcholine 2mg/kg. Trachea was intubated by the anaesthesiologist in charge of the operation theatre with 6.5mm to 7.5 mm ID cuffed endotracheal tubes in females and 7.5 mm to 8.5 mm ID in males. Bilateral air entry was confirmed by five point auscultation and cuff was inflated to 22cm of H2O using Covidien cuff pressure manometer and endotracheal tube was fixed.

Patients were administered intravenous vecuronium bromide 0.08 mg/kg immediately after tracheal intubation to maintain muscle relaxation. Anaesthesia was maintained with oxygen (FiO2 – 0.5), nitrous oxide, propofol infusion at 50ug/kg/minute, fentanyl boluses at 1ug/kg/ hour and vecuronium infusion at the rate of 0.05mg/kg/hr. Mechanical ventilation was done with a tidal volume of 8 ml/kg, and a rate between 12 and 16/min to maintain an end tidal CO2 value between 35 and 45 mmHg. Towards the end of the surgery anaesthetic agents were tapered and cut off. Residual neuromuscular blockade was reversed with intravenous neostigmine 0.05 mg/kg with glycopyrrolate 0.02 mg/kg. Oropharyngeal suction was given and extubation was done once patient opened eyes, obeyed simple commands and breathed regularly with adequate tidal volume.

In addition to the baseline parameters the principal investigator also observed the values of heart rate, systolic and diastolic blood pressures and SpO2 after induction of general anaesthesia, immediately after endotracheal intubation, after creating pneumoperitonium and post extubation

The age and sex were comparable in both the groups (Table 1).

[i] Student’s t test for age

In both the groups, drop in heart rate was noted in patients after pneumoperitonium is achieved.

There was no statistically significant difference in the heart rate, systolic and diastolic blood pressure between the GA group and GA+SAB group at preoperative period, after induction, after intubation after pneumoperitonium and after extubation (Figure 1, Figure 2, Figure 3).

Percentage change in heart rate, systolic and diastolic from the baseline values showed a similar pattern in both the groups. (Figure 1, Figure 2, Figure 3). 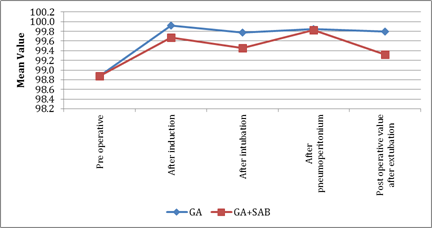 Various drugs along with local anaesthetics have been used as adjuvants for intrathecal placement along with general anaesthesia to obtund the neuroendocrine response and for perioperative analgesia but with a varying success. The introduction of intrathecal opioids into clinical practice has been very beneficial. Drugs such as morphine, pethidine, phenylephrine, neostigmine, ketamine, buprenorphine, fentanyl, and many others have been used, but not a single adjuvant can be considered as an ideal drug for such purpose.

In this study we used injection buprenorphine as the intrathecal opioid. It provides excellent analgesia intraoperatively and post operatively while allowing early ambulation without prolonged motor block.6 Opioid receptors are present in throughout the nervous system. Buprenorphine a lipid soluble opioid and when administered intrathecally it is rapidly soaked up in the lipid tissue of spinal cord with affinity 50 times more than that of morphine thus having faster onset and greater duration of analgesia and lesser concentration of drug remains in CSF and hence less respiratory depression.

P Calvo Soto et al. in 2011 compared the effect of 10 to 15 mg of bupivacaine 0.5% and 20 mcg of fentanyl given intrathecally along with general anaesthesia during laparoscopic cholecystectomy in 40 patients.13 Systolic and diastolic arterial pressures were lower in the combined spinal and general anaesthesia group (94 ± 16 vs 110 ± 18 mmHg ; p < 0.01 and 59 ± 8 vs 69 ± 12 mmHg; p < 0.01, respectively) but a similar heart rate and oxygen saturation in both groups. Also a similar randomized prospective trial by Writuparna Das et al compared the effect of 0.5% hyperbaric bupivacaine and 25 μg fentanyl along with general anesthesia in attenuation of stress response in laparoscopic cholecystectomy.14 None of the patients experienced hypertension during pneumoperitonium. Heart rate was found to be lower in the spinal anaesthesia group. In the present study we used only intrathecal buprenorphine. Systolic and diastolic blood pressure, heart rate and oxygen saturation followed almost the same pattern in both GA group and GA+SAB group following pneumoperitoneum. Intrathecal administration of local anaesthetic produces sympathetic block which compensates for the increased sympathetic tone resulting from pneumoperitoneum and offsets the vasomotor constriction of splanchnic organs and leg muscles. Vasodilatation due to this sympathetic blockade lessens the hemodynamic perturbations due to pneumoperitoneum.14 This probably explain the pattern of hemodynamic changes seen in the present study. This points towards the fact that intrathecal opioid like buprenorphine couldn’t provide the adequate sympathetic blockade needed to attenuate the stress responses.

Side effects of buprenorphine like sedation, respiratory depression, postoperative nausea and vomiting and pruritus which can be attributed to general anaesthesia drugs also was monitored in the present study. None of the patients in either group had any of the side effects except for mild sedation.

Limitations of the current study include not assessing other markers of stress response and inadequate number of patients. The inference would have been better validated with inclusion of a greater number of patients and those with other comorbidities and also if adrenocorticotropic hormone and catecholamines essays done as markers of stress response.