Aggarwal and Mahajan: Comparison of Dexmedetomidine with Fentanyl and Pentazocine – Promethazine in patients undergoing dilation and curettage in monitored anesthesia care

Background: Dilatation and curettage (D and C) is an essential and common minor surgery in obstetrics and gynecology. Sedation, hypnosis and analgesia are used in combination for such short procedures. These days conscious sedation is provided to patients for day care surgeries which includes analgesia, sedation and anxiolysis while rapid recovery is ensured without side effects. Dexmedetomidine is a highly selective alpha-2 agonist that provides anxiolysis and conscious sedation without respiratory depression.

Objective: It was to study the effect of dexemedetomidine with fentanyl versus Pentazocine with promethazine on hemodynamic stability and recovery during sedation in dilatation and curettage procedure. The comparison included the hemodynamic data and recovery time. The effect of the drugs on hemodynamics and monitoring the occurrence of any complication were also done.

Results: Dexmedetomidine is a safe drug which provides good hemodynamics and less recovery time. It also exerts sedative and analgesic effects without respiratory depression unlike most analgesic/sedative drugs, such as ketamine, pentazocine and benzodiazepines.

Conclusion: This study demonstrates that dexmedetomidine is a safe drug with good hemodynamic and recovery profile. Dexmedetomidine administration showed better preservation of MAP and SpO2.

Conscious sedation is a technique of providing analgesia, sedation and anxiolysis while keeping in mind that rapid recovery is ensured without adverse effects. 1, 2, 3, 4 Conscious sedation is given with the prime goals of rapid and safe establishment of procedural condition for performing therapeutic or diagnostic procedures while ensuring fast, predictable recovery with minimal postoperative events. Dexmedetomidine being a selective α2 adrenoceptor agonist has sedative, amnestic, sympatholytic and analgesic effects.1 It has been used in a number of clinical trials as effective and safe substance. Dexmedetomidine provides an excellent analgesia, conscious sedation in patients who seem to be asleep, however can easily be awaken. There is no respiratory depression which makes dexmedetomidine one of the freely used medication in anesthesia. These characteristics of dexmedetomidine make it suitable for sedation and analgesia during the perioperative period. Its use as a premedication, as an adjunct for general and regional anesthesia and as a postoperative sedative and analgesic are similar to those of the benzodiazepines.5

Pentazocine was the first of opioid analgesic and antagonist to have widespread use. Pentazocine is a synthetic analgesic class which shows both agonist and weak antagonist activity at the opioid receptors.6, 7 The physiologic effects of pentazocine are similar to morphine and it has one third of morphine’s analgesic potency. Pentazocine depresses myocardial contractility, but increases myocardial oxygen demand as it increases peripheral resistance, blood pressure and the plasma catecholamine level. Despite weak antagonist action, it precipitates opioid withdrawal reactions. It is expected that it would have a ceiling effect on visceral pain and respiratory depression. Adverse reactions seen include potential for psychotomimetic effects such as confusion, disorientation, hallucinations, depression and dysphoria. Doses causing sedation have been seen to be associated with diaphoresis and dizziness.8

Pentazocine has been used for day care sedation procedures in doses approximating 0.5 mg/kg, usually to a maximum of 30 mg. In these doses it can have a duration of action of 1 hour. This study attempted to investigate whether Dexmedetomidine with Fentanyl combination is an effective alternative modality to pentazocine with promethazine as sedation in regards to hemodynamic stability and recovery for patients undergoing Dilatation and curettage.

After Ethical Committee approval and written informed consent from patients, a randomized controlled trial was conducted at tertiary care center. 50 patients, aged 18-60 years of age were taken who were undergoing diagnostic and therapeutic D and C with American Society of Anesthesiologist (ASA) Grades I and II. Exclusion criteria included patients with ASA physical status Grade III and more, baseline oxygen saturation (SpO) <90%, patients with comorbid conditions such as diabetes mellitus, hypertension (HTN) or hepatic or renal insufficiency. Patients who had a known allergy to these drugs, difficulty in communication (due to language problem or deafness) and with a history of egg or soya bean allergy were also excluded. Preoperative anaesthesia check-up was done. In operating room, venous access was established on the nondominant hand of every patient by 18G/20G cannula and intravenous (IV) fluid was started. Baseline parameters recorded were heart rate (HR), systolic blood pressure (SBP), diastolic blood pressure (DBP), mean blood pressure (MAP), respiratory rate (RR) and SpO2%. These were again recorded immediately after the loading dose (0 min) and then at 2, 5 and 10 min during the procedure and then after completion of the procedure.

Statistical analysis: Quantitative data were expressed as mean± standard deviation (SD). Qualitative data were expressed as frequency and percentage. Independent-samples t-test of significance was used when comparing between two means. Chi-square test of significance was used in order to compare proportions between two qualitative parameters. P-value <0.05 was considered as significant.

In the recovery room, MAS9 of patients were recorded every 5 min by anesthesiologist along with any adverse effect such as restlessness, shivering, nausea, vomiting, abdominal discomfort and respiratory depression. On achieving MAS of 9-10, patients were discharged. In the case of any adverse events in the recovery room such as nausea, vomiting, abdominal discomfort and respiratory depression, the patients were observed in the hospital for at least 12 hours.

Two groups were comparable in terms of demographics and baseline vitals (Table 1). 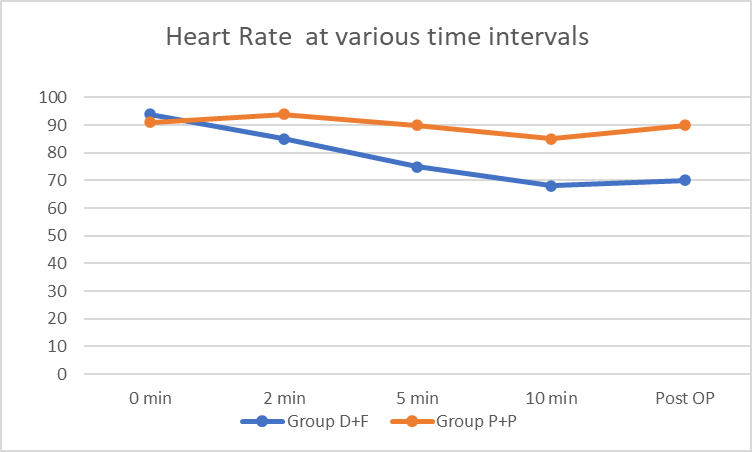 Group (D+F) had significantly (P < 0.05) lower HR after infusion of loading dose at 2, 5 and 10 min during procedure and immediately after procedure (Figure 1) (Table 2). 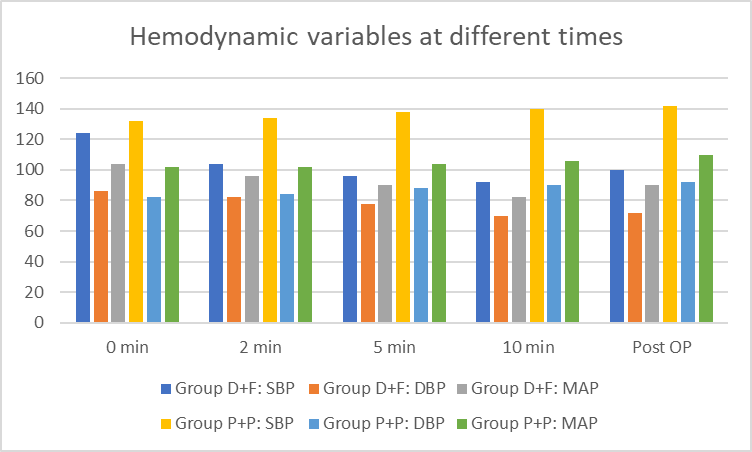 Conscious sedation is a technique to provide analgesia, sedation and anxiolysis while ensuring fast recovery without adverse effects. Conscious sedation is administered with main goals of rapid and safe establishment of satisfactory perioperative condition for the performing therapeutic or diagnostic procedures while ensuring quick predictable recovery with minimal postoperative events. Conscious sedation provides greater flexibility in scheduling procedures so we can maintain higher volume of patients.3 There is decrease in dependence on the hospital bed availability. There is also a lower incidence of sepsis, respiratory and cardiovascular complications. It requires less preoperative assessment and postoperative medications. Early recovery and ambulation decrease periprocedural morbidity and mortality. Conscious sedation also decreases overall procedural costs. Patients being able to observe the procedure, can communicate with surgeon during the procedure which leads to high patients and surgeon satisfaction. Dexmedetomidine is a selective alpha2 agonist with analgesic and sedative properties.10 These effects of dexmedetomidine make it suitable for sedation and analgesia during the whole perioperative period. Its use as a premedication, as an anesthetic adjunct for general and regional anesthesia and as a postoperative analgesic and sedative are similar to those of the benzodiazepines. Pentazocine is a benzomorphan derivative that has opioid agonist as well as weak antagonist actions. Using combination of two agents can provide better patient control and allows the use of smaller doses of each single agent avoiding its undesirable effects.

Promethazine is used as a sedative and hypnotic during anesthesia and as a premedication for anesthesia. It prevents nausea/vomiting by blocking the action on acetylcholine and adds a bit of mild sedation with pentazocine. Opiates provide analgesia and sedation during surgical procedures. Fentanyl is favored because of its fast onset and short duration of action. Unlike morphine, fentanyl causes minimal cardiovascular depression and therefore, hypotension rarely. Fentanyl binds with stereo specific receptors at sites within the CNS and increases pain threshold, varies pain reception, and inhibits ascending pain pathways. Along with analgesia, fentanyl suppresses the cough reflex and precipitates respiratory depression, drowsiness, and sedation. The half-life of fentanyl is 2-4 hours. In our study, continuous infusion of dexmedetomidine was administered to maintain a steady sedation level.

In study of Solanki et al.11 who Compare of the efficacy of dexmedetomidine, pentazocine­promethazine combination in tympanoplasty surgery there was a significant difference between the hemodynamic response and satisfactory sedation in two groups. this agree with our study but the difference between the groups was higher in this study. In study of Khanduja et al.12 also showed that patients in the dexmedetomidine group required lower use of rescue propofol. In our study there was a significantly lower use of rescue propofol in dexmedetomidine and fentanyl group which agree with study of khanduja et al.

In study of Memon et al 13 they found Intravenous Dexmedetomidine is an excellent drug for surgeries like Tympanoplasty done under onitored anaesthesia care. It not only improves intraoperative anaesthesia but also postoperative analgesia and thereby, improving the outcome of surgery. Our study reports similar findings.

Study of Manoj et al 14 showed that Recovery time, as assessed by modified Aldrete Score was significantly longer in propofol Group (13.93±3.11 minutes) compared to Dexmedetomidine group (5.63±1.40min). In our study also, post-operative recovery time was longer in group P+P than in group D+F.

In the study of Yağan et al 15 also showed that the time for reaching MAS 9 was shorter in the dexmedetomidine group and the difference was statistically significant. This agree with our study.

Dexmedetomidine provides conscious sedation with analgesia without respiratory depression, unlike most analgesic/sedative drugs, such as opioids, benzodiazepines, and propofol. Moreover, degree of satisfaction experienced by patients as well as surgeons was better with dexmedetomidine. Therefore, dexmedetomidine in combination with fentanyl is effective to provide conscious sedation for dilatation and curettage (D&C) procedures in adults and it can be a valuable alternative to pentazocine and promethazine.

U Solanki Comparison of Dexmedetomidine vs. Pentazocine - Promethazine for Tympanoplasty under MAC: A Randomized Double Blind StudyIndian J Anesth Analg2018511193340