Introduction: Mechanical ventilation is a life-sustaining therapy for the treatment of patients with acute respiratory failure. One of the key factors for good clinical practice in the ICU is to provide adequate sedation. An ideal sedative should provide a rapid onset, a rapid recovery. On this background the present study is designed to evaluate the efficacy and safety of dexmedetomidine, propofol and midazolam for sedating property, hemodynamic effects and analgesic.

Materials and Methods: It is an open label, single blinded randomized control trial. Census sampling is planned for recruitment which will have maximum power and type I error <0.05.

Conclusion: In this study we found that difference of mean hemodynamic parameters at different time interval in three drugs was not statistically significant. The Heart Rate remain lower in Dexmedetomidine Group compared to Midazolam and Propofol Group after 45 minutes of infusion.

Mechanical ventilation is a life-sustaining therapy for the treatment of patients with acute respiratory failure and indeed the advent of its use heralded the dawn of modern intensive care units. Many patients require ventilator support for respiratory insufficiency or abnormal Arterial Blood Gas. The critically ill surgical patients in the ICU experienced discomfort due to endotracheal intubation and mechanical ventilation, intermittent physiotherapy, tracheal suction etc and also experience pain due to surgical procedure. Moreover noise produced by the monitoring and support system, lighting in the ICU surrounding are not pleasant rather it is enhancing the adverse reactions requiring adequate sedation.1

Few factors are necessary for better ICU practice like adequate sedation & analgesia which will reduce anxiety and improve the tolerance of the patient on ventilation, reduce fighting against ventilation and also it will increase metabolic and cardiac stability. Practice of ICU sedation has been changed remarkably now a days. Deep sedation is no longer practiced as it increases ICU stay and morbidity on the other hand inadequate sedation result in anxiety, agitation and stressful experiences.

An ideal sedative should provide a rapid onset, a rapid recovery, have low profile to accumulate, leaving no withdrawal effects, should be easily titratable and should not disturb hemodynamic stability.2

Many sedative agents are in use in different ICU setup. Propofol is most commonly used in ICU as sedative agent due to its rapid onset & offset and shot duration of action but few factors which limit the use of propofol are haemodynamic unstability like hypotension and bradycardia and lack of analgesic action.3

This study is conducted to know the safety and efficacy of these three drugs-Dexmedetomidine, Midazolam & Propofol for quality of sedation, haemodynamic stability & requirement of supplemental analgesics in post-operative patients who are in mechanical ventilation in Anaesthesia ICU of AGMC.

On studying the past records in AGMC for one and half year almost 36 cases may be available. Rounding it to 39 cases which is the study population it is proposed to distribute the patients equally in 1;1;1 ratio in three groups so that each group will receive 13 patients.

Since the study population during the study period is less census sampling is planned for recruitment which will have maximum power and type I error <0.05.

Primary variable will be sedation of the patient. Sedation will be assessed by Ramsay Sedation Score. (1=agitated; 2 = cooperative, tranquil; 3=responds to verbal command; 4=brisk response to loud voice or glabellar tap; 5 = sluggish response to glabellar tap or loud voice; 6=no response)

Secondary variable will be depth of analgesia achieved and hemodynamic stability which will be assessed by Heart Rate, Blood Pressure, Respiratory Rate, SPO2.

In this study 39 patients were chosen with GCS 9-15 who are on post-operative mechanical ventilation and they were divided randomly into three groups each group has total 13 patients. Group M received inj Midazolam loading dose 0.15mg/kg and than 0.1mg/kg/hr infusion. Group P received inj Propofol 1.5mg/kg bolus followed by mg/kg/hr continuous infusion and Group D received inj Dexmedetomidine bolus dose of 1 microgm/kg and infusion at the rate of 0.5 microgm/kg/hr. If any patients need analgesia, inj fentanyl has been used to supplement it. Desired depth of sedation was assessed by Ramsay Sedation Score.

All of them received those study drugs as bolus first at 0 hour and then continuous infusion for atleast 48 hours to keep RSS within 2-3.ventilator mode was set SIMV, Tidal Volume 7-8 ml/kg. HR, SBP, DBP, RR, SPO2 & RSS was assessed at 0.5,10,15,20,25,30 min and then at 1 hour and 2 hour. All the patients were closely observed for complications like bradycardia and hypotension and managed accordingly if any. All results are measured in Mean +_SD & ANOVA test has been used for independent variables with normal distribution. SPSS & Excel 2007 has been used for dta analysis. P<0.005 has been taken as statistically significant.

These findings are similar to study done by Jakob SM et al (2012)5 where they find no statistical significance Sex, Age and GCS score between their three groups (P>0.05).

In their study in 2018 Elgebaly AS et al6 also found no difference in age and BMI in both groups.

In our study we found that difference of mean HR at different time interval was not statistically significant but compared to group M & P, HR falls more in group D and the mean HR is less in Dexmedetomidine group. 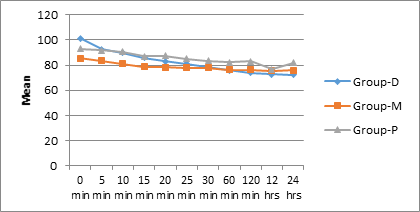 No statistical significant difference in SBP & DBP among all these groups.

Findings of our study is also similar to the study conducted by Esmaoglu et al.7 where they studied 40 patients of eclampsia on mechanical ventilation and their study shows that dexmedetomidine reduces HR more tha Midazolam in first 24 hour.

In another similar study Elgebaly AS et al6 also found that Mean Arterial Pressure is lower in Propofol group. The HR was more lower in Group D patients then Group P and Group M. As per their inference dexmedetomidine is safe & effective sedative agent for mechanically ventilated patients after cardiac surgery. 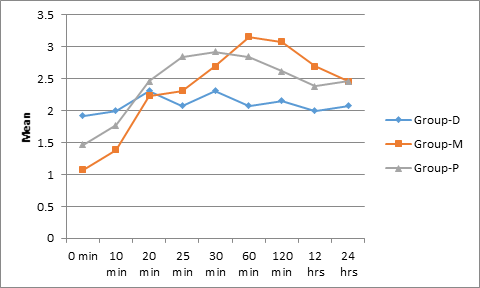 This finding is similar to the study by Sharma SK et al10 where they found that the Ramsay Sedation Score was comparable, and it maintained at a mean score of 2-3 at most time intervals in both group I (Midazolam) and Group II (Dexmedetomidine).

In a study Conti G et al11 in 2016 calculated the asynchrony index (AI) by tracing electrical activity of diaphragm, airflow etc, and they opined that AI was lower in dexmedetomidine group from 2 hour onwards than propofol group. So they concluded that dexmedetomidine provide better patient ventilator synchrony than propofol.

In our study the mean Opioid at 24th hour is more in Midazolam group and it is significantly less in patients receiving dexmedetomidine. 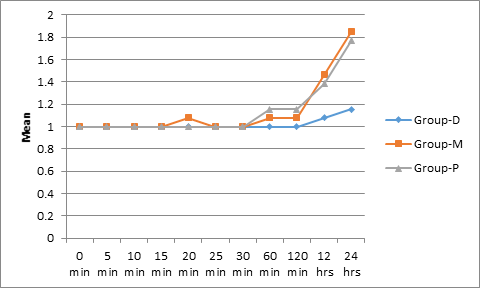 In our study we found that difference of mean hemodynamic parameters at different time interval in three drugs was not statistically significant. The Heart Rate of patients at 45 min interval remain lower in Dexmedetomidine Group compared to Midazolam and Propofol Group. There ne incidence of bradycardia in Dexmedetomidine group which was transient and managed accordingly.

The Ramsay Sedation Score was higher in group M and it was steady in group D. Group D patients were easily arousable and they have tolerated ICU procedures like suctioning, physiotherapy etc better compared to other two groups.

There is less incidence of post extubation delirium and less requirement of supplementary analgesia in Dexmedetomidine group.