Background: Pain sensation from venepuncture not only affects the patient physically and psychologically but also hinders the functioning of the health care provider. Lignocaine has been tested for its use in order to decrease intensity of pain during intravenous cannulation for long time. A newer drug tetracine with less systemic adverse effects has been tried recently. The analgesic efficacy of the eutectic mixture of lignocaine and prilocaine has been compared with mixture of Lignocaine and tetracaine when applied during venepuncture in adult patients under similar condition, as there is dearth of study with tetracaine.

One often encounters apprehensive patients in a hospital setting with a fear of needle prick and pain. This apprehension not only affects the patient physically and psychologically but also hinders the functioning of the health care provider. Pain sensation from venepuncture is carried by nerve endings in the epidermis. Different methods like valsalva maneuver, local anesthesics and ethyl chloride spray were tried previously to minimize the procedural pain with only limited success.1, 2 For many years lignocaine has been tested for its use in order to decrease intensity of pain during intravenous cannulation. Increasing dose of lignocaine has many side effects. Combination of two or more drugs with lower dose range can have equal or more efficacy with less side effects. Eutectic mixtures of lignocaine (2.5%) & prilocaine (2.5%) have been used as analgesic during vene puncture. But search for better drug or combinations were on, as noted on subsequent literature. A newer drug tetracine with less systemic adverse effects has been in use recently.3 Based on this knowledge we are presuming that eutectic mixtures of lignocaine(7%) & tetracaine (7%) also can produce analgesic effect during vene puncture. The efficacy of the above mentioned eutectic mixtures of lignocaine (2.5%) & prilocaine (2.5%) have been compared with eutectic mixtures of lignocaine (7%) & tetracaine (7%) in this study as there is dearth of study with tetracaine combination.

This study was done in a teaching hospital in a city of West Bengal for the period of November 2019 to October 2020. After obtaining institutional ethics committee approval and Clinical trial registration (No: CTRI/2019/11/022131) 90 patients admitted in the department of general surgery and orthopedics were recruited for the study after getting informed consent. The sample size was calculated as per a previous study by Browne et al4 and from the Cohen Power Tables5 for effect size, it had been found that there would be a need of 34 samples per group with 96% power at 5% level of significance. The number of samples in each group would be in the ratio 1:1. Thus the required sample size for the study would be 34x2 =68. Hence in this study we have taken 90 subjects of either sex anticipating some dropout and procedural failure due to multiple puncture.

Inclusion criteria were ASA physical status I and II, age: 18-60 years, of either sex.

All patients randomly allocated in two groups according to computer generated randomization chart.

Parameters to be studied

The primary outcome ie, effectiveness of analgesia was determined by documenting the 10 point Visual Analogue Scale (VAS). The patients’ hands were assessed for the optimal site for venepuncture to ensure intact healthy skin at the intended area of interest. Once the optimal area is determined, the randomly assigned method of dermal analgesia was applied. Although anectdotal evidence and Basavana G Goudra et al, suggest that antecubital fossa might be less painful than dorsum of hand for IV cannulation, we have chosen dorsum of the hand as the site of cannulation for all patients considering the drawback of kinking and fixation problem at antecubital fossa.6 Moreover this will eliminate the effect of difference in pain threshold between dorsum of hand and antecubital fossa.

Group P: Lignocaine & Prilocaine cream, 1 g per 10sq cm, 2-3 mm thick layer was applied at the determined site and covered with an occlusive dressing for 60 minutes.

Group T: Lignocaine & Tetracaine cream 1g per 10 sq cm, 1-2 mm thick layer was applied at the determined site and covered with an occlusive dressing for 60 minutes.

The local anaesthetic was randomly allocated to the patients and applied on the dorsum of non dominant hand by the first investigator. After application of the cream, the area of the skin was assessed for erythema, oedema, itching or any other adverse reaction. Emergency medicine kit including anti-allergic, anti-inflammatory and steroid were kept ready and available for management of any adverse reaction. All venepunctures were performed by a second investigator who was unaware of the cream that had been applied. Following the insertion of a 18 gauge IV cannula in all patients by the second investigator, the patient was shown the VAS Scale by the same investigator. Patients were educated about the VAS Scale representing a continuum of pain intensity during anesthetic check up, and asked to rate the pain experienced at the time of venepuncture. At one end 0 represents “no pain” while in the other end 10 represents “worst possible pain”. Assigned numbers were determined and recorded. As patient were taken for induction of anesthesia after IV cannulation, further assessment of pain score was not done.

All data were manually collected and then tabulated using Microsoft Excel TM 2011. Statistical Analysis was performed with help of Epi Info (TM) 7.2.2.2. Which is a trademark of the Centers for Disease Control and Prevention (CDC).

Using this software, basic cross-tabulation and frequency distributions were prepared.

Chi-square (χ2) test was used to test the association between different study variables under study. Corrected χ2 test was used in case any one of cell frequency was found less than 5 in the bivariate frequency distribution. Also t-test was used to compare the two means. And p<0.05 was taken to be statistically significant.

Demographic profile of patients were comparable and statistically not significant, t-test showed that there was no significant difference in mean ages of the two groups, p=0.792 (Table 1).

Hemodynamic parameters were within normal range (Table 2, Table 3) and we did not notice any significant complication. 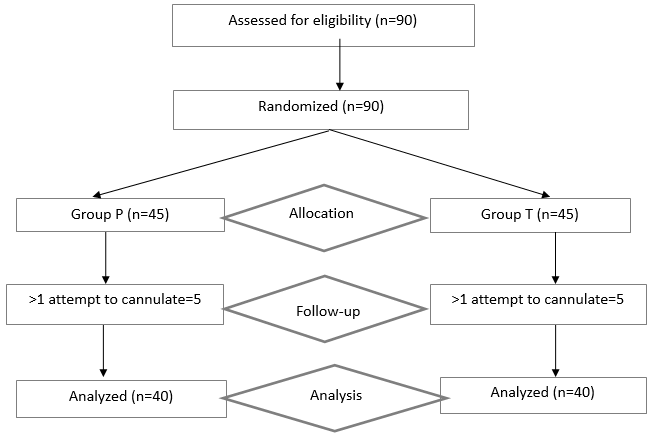 Comparison of demographic parameters of the two groups

Comparison of Heart Rate (HR) at different time of the two groups.

Comparison of VAS of the patients of the two groups

Intravenous cannulation is now performed almost universally before induction of anesthesia. However, this procedure has been reported to produce significant pain and therefore the use of transdermal anaesthetic agents may be appropriate.7 To be of value in clinical anaesthetic practice, topically applied local anaesthetics should have a fast onset of action and provide good analgesia by 60 min.8

Hallen B et al. in 1985 in their study compared lignocaine – prilocaine cream with a placebo and concluded that lignocaine and prilocaine cream has shown to provide superior topical analgesia.9 Hence no placebo group was included in the present study.

The key finding of this study (Table 4) is that the mean pain score (VAS) of the patients of Group-P was significantly higher than that of the patients of Group- T (p<0.001) which suggests that the eutectic mixture of lignocaine and tetracaine offers better pain relief than the eutectic mixture of lignocaine and prilocaine under similar condition. In a study of Browne et al the VAS score for tetracaine gel were lower than for EMLA (p=0.0002).4 Romsing et al. compared EMLA cream with tetracaine gel applied under similar conditions and concluded that tetracaine gel was significantly better than EMLA cream in reducing the pain of i.v. cannulation.10 It was seen in the previous study by Mc Cafferty et al that amethocaine formulation provided superior quality of percutaneous anesthesia when compared with EMLA cream.8 A Cochrane review examining efficacy of amethocaine gel and EMLA cream for pain relief during cannulation in children found amethocaine to be superior as analgesic.11 The above mentioned study results corroborates with the finding of our study. Lignocaine and tetracaine combination have shorter onset time and longer duration, which might be attributed to the better analgesic efficacy of this eutectic mixture in our study, though this needs to be ascertained.

But the following study results are not concordant with our study. As Molodecka et al in their study concluded that neither speed of onset nor quality of anesthesia produced by amethocaine formulation was superior to that produced by EMLA.12 In the study by Greveling et al, pain relief by the application of lignocaine and prilocaine cream and lignocaine and tetracaine cream were compared for Nd:YAG assisted hair removal in patients with Acne Keloidalis Nuchae, as opposed to our study, VAS scores of lignocaine tetracaine cream were significantly higher (p=0.001) when compared to that of lignocaine prilocaine cream.13

Vasodilator properties of amethocaine were noted previously by Ashley EMC et al14 and Mazumdar et al.15 However, this was not apparent during the course of our study. Comparative costing analyses of the dermal anesthetic agents identify lignocaine and tetracaine cream to be costlier than lignocaine-prilocaine cream.

In the study by Arendts et al, there was a significant increase in the adverse effects reported with AnGEL( 4% amethocaine gel) compared to EMLA. One patient with 4% amethocaine gel developed blistering and other adverse effects like erythema, wheal and pruritus were also reported.16 In the study by Sawyer et al, lidocaine /tetracaine patch produced significantly more erythema than did lignocaine/prilocaine cream.17 In the study by Browne et al, blanching occurred more frequently with EMLA, while erythema and pruritus was observed following application of amethocaine gel.4 Although no adverse reactions eg. blisters, erythema, wheal or pruritus were observed during our study.

Paediatric population was not included in this study. Anxiety and fear factor pre and post procedure were not assessed. Pain is a subjective personal experience which has high inter personal variability. VAS score is known to be linear in acute pain and changes in this score generally represent relative change in the magnitude of pain.18 However, there might be inter personal variability in the scoring of same pain experience by two different study individuals due to different pain thresholds, or different perceptions of similar noxious stimulus. Lignocaine and tetracaine cream is costlier also.