Tappe, Patkar, Lokare, and Phalgune: A randomized controlled study on efficacy and safety of air versus alkalinized 2% lignocaine for inflating endotracheal tube

Introduction: The postoperative sore throat (POST) occurs in approximately ≥ 50% of individuals after general anaesthesia. An attempt is made in the present research to evaluate the efficacy of alkalinized 2% lignocaine with conventional air as cuff inflating media, in preventing POST and coughing in patients undergoing a surgical procedure under general anaesthesia.

Materials and Methods: This randomised double-blinded controlled study was conducted in sixty patients. In Group A, the endotracheal tube (ETT) cuff was filled with air, whereas in Group B, it was filled with 2% lignocaine. Coughing and POST were recorded immediately, at 1 hour, 12 hours and 24 hours. We have compared coughing, POST following tracheal extubation, and volume of inflation medium and intra-cuff pressure at the start and at the end of surgery between the two groups.

There are many airway complications associated with tracheal intubation, or extubation after general anaesthesia.1 In roughly ≥ 50% of patients the postoperative sore throat (POST) is observed.1 The occurrence of vigorous coughing, agitation, or restlessness, increase intracranial, intra-thoracic, or intra-abdominal pressure, bronchospasm, wound dehiscence and bleeding are also noted after coming out from general anaesthesia.1 During postoperative care patients may develop complications such as hoarseness, dysphonia, or dysphagia.1 Lignocaine is one of the most commonly used drugs for preventing POST and its efficacy was evaluated.2 When lignocaine is injected into the endotracheal tube (ETT) cuff, it spreads through the cuff membrane and induces anaesthetic action in the trachea.3 This increases airway tolerance to tracheal tubing. After tracheal extubation, the hemodynamic alterations are minimized resulting in reducing the incidence of coughing. Only the non-ionized base form of the drug diffuses across the hydrophobic polyvinyl chloride walls of the ETT cuff. Sodium bicarbonate increases the unionized form of local anaesthetics, which causes an increase in the diffusion of it through the cuff, thereby reducing the dosage of local anaesthetics.3 An attempt is made in the present research to evaluate the efficacy of alkalinized 2% lignocaine with conventional air as cuff inflating media, in preventing POST and coughing in patients undergoing a surgical procedure under general anaesthesia.

We conducted this randomised double-blinded controlled study from April 2019 to October 2019 in operation theatre, postoperative care unit (PACU) and wards. The study was approved by the institutional ethics committee (Letter No: RECH/EC/2019-20/66). Before enrolling the patients for the study, we took written informed consent. The risks and benefits of the procedure were explained to the patients.

Patients of either gender having age between 18 and 65 years, duration of surgery up to 90 minutes, Cormack-Lehane grade I-II and American Society of Anaesthesiologist (ASA) grades I and II.

We initially included 75 patients as per the inclusion criteria. Fifteen patients were excluded. The remaining 60 patients were randomly divided into two equal groups of 30 each, with the help of www.randomizer.org (Fig 1). ETT cuff was filled with air and 2% lignocaine 2 mL (40 mg) made alkalinized with 1.5% sodium bicarbonate 3 mL (the sodium bicarbonate 7.5% was available, which was diluted five times) to prevent air leak during positive pressure ventilation guided with cuff manometer in Group A and Group B respectively. A senior anaesthesiologist supervised the aforesaid procedure. Patients and observer were blinded for the study. The presence or absence of coughing, and POST immediately, at 1 hour, 12 hours and 24 hours were recorded by the observer.

The detailed pre-anaesthesia check-up was conducted for fitness which included airway assessment as mentioned in the study proforma to look for any signs of difficult intubation which could contribute as an independent factor for the POST. In the operation theatre, adequate intravenous (IV) access was confirmed. Minimum mandatory monitors such as non-invasive blood pressure, pulse oximeter, and electrocardiography were attached. Surgery was performed under standard general anaesthesia protocols. Premedication was done by Inj. glycopyrrolate (4µg/kg) and Inj. fentanyl (2µg/kg). Patients were pre-oxygenated for three minutes. Induction was done with Inj. propofol (2 mg/kg). After confirming that the patient can be ventilated by the mask (100% oxygen given for 2-3 minutes) a long-acting muscle relaxant Inj. vecuronium (0.08-0.1 mg/kg) or Inj. atracurium (0.5 mg/kg) was administered.

Atraumatic direct laryngoscopy was performed. Insertion of appropriate sized Portex ETT was done under direct vision till cuff went beyond the vocal cords. For female patients, 7.5 mm ETT and for male patients 8.5 mm ETT was used. Confirmation of ETT placement was carried out by auscultation of the chest, chest rise after ventilation and capnography monitoring. The cuff pressure at the start of the surgery was approximately 20 cm of H2O.

Anaesthesia was maintained with oxygen: nitrous oxide 50: 50 and sevoflurane with end-tidal concentration maintained between 1.5% - 1.8% (adjusted according to hemodynamic parameters) with controlled ventilation. End-tidal carbon dioxide was maintained between 30% - 35%. Muscle relaxant supplemental dose was given if required. After completion of the surgery, the patient was reversed with Inj. neostigmine (0.05 mg/kg), and Inj. glycopyrrolate (0.008 mg/kg) IV. After proper nasopharyngeal and oropharyngeal suctioning, ETT was removed during inspiration. The total duration of anaesthesia, volume and cuff pressure of both the groups were noted.

Coughing, POST and volume of inflation medium, and intra-cuff pressure at the start and at the end of surgery were the primary and secondary outcome measures respectively. Gaur P et al reported that the incidence of POST was 40.0% and 8.0% in air and lignocaine group respectively.4 The sample size was calculated by formula5 N = {2pav(1-pav) (Zα + Zβ)2} /Δ2. We have taken Zα a standard normal variate at 5% type 1 error (1.96) and Zβ the standard normal deviate for β power 80% at type II error (0.84). A sample size of 30 patients in each group was calculated by above method.

Data collected were entered in Excel 2007. Statistical Package for Social Sciences for Windows, Version 20.0 from IBM Corporation, Armonk, NY, USA was used for the analysis of the data. The comparison of categorical and continuous variables was done using Chi-Square test/Fisher’s exact test and student’s t-test respectively. The confidence limit for significance was fixed at 95% level with p-value < 0.05.

Comparison of mean volume, and mean pressure of inflation medium

[i] Unpaired ‘t’ test was used

[i] Fisher’s exact test was used 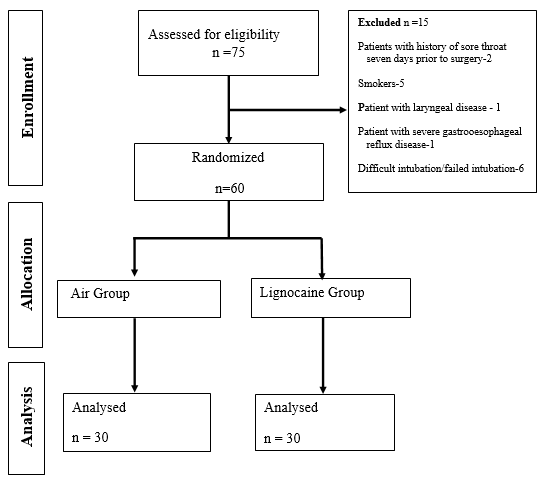 Of 75 patients assessed for eligibility, 15 were excluded because patients with a history of sore throat seven days prior to surgery (2), smokers (5), patient with the laryngeal disease (1), severe gastro-oesophageal reflux disease (1) and difficult intubation/failed intubation (6) (Figure 1). The patients were randomized into two groups. ETT cuff was filled with air and 2% lignocaine 2 mL (40 mg) made alkalinized with 1.5% sodium bicarbonate 3 mL in Group A and Group B respectively.

Mean age, gender, mean BMI, ASA grades and mean duration of anaesthesia were comparable in both the groups with no statistically significant difference (Table 1).

Coughing and POST are the most bothersome postoperative complaints in patients undergoing general anaesthesia.1, 2, 3 An increased intra-cuff pressure is a major contributing factor for coughing and POST.3 Lignocaine is a local anaesthetic. Being liquid, the lignocaine prevents the transmission of N2O into the cuff, it also permeates through the semipermeable membrane of polyvinylchloride cuff. Thus, it provides a calming effect on tracheal mucosa and reduces pressure-induced problems.2, 3, 6

Jaichandran et al. concluded that maximum diffusion of lignocaine across the ETT cuff occurred at pH 7.4, and cough receptors are blocked in the tracheal mucosa. This technique can be used for surgeries of less than two hours duration.7 If nitrous oxide is used as a conjunct with other volatile anaesthetics, intra-cuff pressure is increased. At the beginning of the surgery, this diffuses into the cuff. When cuff pressure exceeds the tracheal mucosal capillary pressure (> 30 mm of Hg), tracheal erosion occurs and postoperative cough and sore throat are caused.8 Estebe et al. reported that the liquid volume removed from the cuff decreased significantly (5.9 ± 1.6 mL) for the alkalinized group (p-value < 0.001), whereas the air volume withdrawn at extubation time increased significantly in Air Group (11 ± 2.7 mL) [p-value < 0.0001].9 Estebe et al. reported that in the air-filled cuff with ETT, the incidence of cough was 95% whereas in the alkalinized lidocaine filled cuff it was 5%. In the air-filled cuff, the incidence of hoarseness was 80% whereas in the alkalinized lidocaine filled cuff it was 10%. They further reported that there was a decrease in the sore throat during the postoperative period when the cuff of an ETT was inflated with a low dose of alkalinized lidocaine as compared to the air. There was reduction in the sore throat during 24 hours postoperative period in alkalinized-lidocaine groups as compared to air group. (p-value < 0.0001).10 Estebe et al. concluded that due to alkalinization of intra-cuff lignocaine, the diffusion of nonionized neutral base across the hydrophobic structure of cuff membrane was increased from 1% to 65% within six hours.11

It was observed that there was a significant decrease in dose requirement of lignocaine in the alkalinized form (20–40 mg) as compared to non-alkalinized lignocaine dose (200–500 mg).3, 11, 12 Therefore, in our study we used 40 mg of alkalinized lignocaine for more safety and efficacy. External lubrication in the form of lignocaine jelly over the cuff was used in the present study during intubation for the introduction of the cuff up to the vocal cords. At the time of coming out from anaesthesia, cuff lubrication in the form of jelly or topical spray was associated with unfavorable phenomena.2, 3, 13 Lignocaine spray contains additives such as l-methanol and ethanol. These additives are linked with causing POST and hoarseness.6

Gaur et al. reported that the occurrence of coughing and POST at immediately, 1 hour and 24 hours after operation was higher in the air group as compared to the lignocaine group (p-value < 0.05). In the lignocaine group, the impact of the duration of anaesthesia on the increase in cuff pressure was considerably lower.4

Lam et al. in a recent meta-analysis stated that the incidence of early and late POST, agitation, coughing, hoarseness and dysphonia like post-intubation emergence phenomena were lower in the lignocaine group as compared to the air group (p-value < 0.05).1 Tanaka et al. stated that local and systemic lignocaine therapy reduced the occurrence and severity of the POST.2

POST and coughing are very stressful and turn out to be more disturbing than the surgery itself. Most frequent postoperative complications occur due to ETT intubation. Patient's bucking or coughing and friction between the tracheal mucosa/increase in ETT cuff pressure during general anaesthesia are the important causes of these morbidities. This has detrimental effects such as an increase intracranial, intrathoracic or intra-abdominal pressure, bronchospasm, wound dehiscence, bleeding, sore throat, hoarseness, or dysphonia. When the ETT cuff pressure is elevated, it compromises the blood supply of tracheal mucosa. This may lead to ciliary loss, inflammation, ulceration, hemorrhage, tracheal stenosis and trachea-esophageal fistula. It is very challenging to maintain the ideal cuff pressure during the entire surgery. ETT cuff filled lignocaine with alkalinized sodium bicarbonate may reduce these effects.

Potential limitations of the study merit consideration. The sample size was small. Plasma alkalinized lignocaine levels were not measured. There was no practical way of assessing the amount of alkalinized lignocaine that diffused across the cuff. We didn’t grade the severity of coughing and POST, but only noted the incidence. Further multi-centric studies with a large sample size are needed to validate our results.