Background: Lumbar epidural block is a commonly used procedure for providing anaesthesia, post-operative analgesia in all groups of patients irrespective of age, sex, weight and height of the patients. The knowledge of posterior space is important in view of the fact that this is the space where drugs for epidural anaesthesia/ analgesia are used. The knowledge of variability of this space with physical parameters of the patient, help us in reducing the incidence of total spinal anaesthesia.

Result: Mean skin epidural distance was 4.30 ±0.57 in lateral position and 4.05 ± 0.57 in sitting position, the difference being statistically significant. (P= 0.002). There was positive correlation between skin epidural distance with weight, BMI and abdominal girth of the patient. Mean posterior epidural space depth was 0.468+14 cm in lateral position and 0.459+0.14 cm in sitting position, the difference being statistically insignificant. There was a positive correlation between posterior epidural space depth and height of the patient.

During placement of epidural needle a false loss of resistance can occur if the epidural needle, after passing into spinous ligament, enters either the prevertebral or the paravertebral space. Injection of local anaesthetic in either of these spaces results in an inadequate block.

Ethics: Clearance was taken from Institutional Review Board.

Two hundred adult patients between 20-60 years, ASA Grade I or II, scheduled for elective lower abdominal, perineal, orthopedic or plastic/reconstructive surgery under Subarachnoid block were taken up for the study. Patients who had spine deformity, contra-indication for regional anaesthesia were excluded from the study.

The total number of cases was decided as per study conducted by Hamza J et al,7 so as to detect a difference of 10 percent in the skin epidural distance in lateral vs. sitting position. The number of cases required per group with an alpha error of 0.05 and power of 80 percent was 61.

After taking approval from Institutional review board and written informed consent from the patients, anaesthetic procedure of subarachnoid block (SAB) was explained to them. All patients were advised premedication with Tab. Alprazolam 0.5 mg at night and 2 hours before surgery along with sips of water. Using random numbers table, patients were allocated into one of the following two groups: Group L (SAB with patient in lateral position) and Group S (SAB with patient in sitting position).

Prior to the SAB, the age, height, weight and abdominal girth at the umbilicus were noted. In the operating room, all monitors were attached, baseline parameters measured and intravenous line secured. Subarachnoid block and further observations were performed by an investigator who was blinded to the details of the patient characteristics.

Under all aseptic conditions, skin was locally anaesthetised in L3-L4 interspace using 25G hypodermic needle. A 23 G disposable Quincke Babcock spinal needle of length 10.78 cm (measured with stillette removed) was inserted perpendicular to skin at L3-4 via the midline approach. After passing through the skin and the interspinous ligament, the stillette of the needle was removed. The 5ml glass syringe available in the set was attached to the spinal needle holding 3-5 ml of air. The epidural space was then identified using loss of resistance to air in the syringe. Not more than 2 ml of air was pushed in. The distance from the skin to the hub of the spinal needle at that point of reaching epidural space was marked on the sterile corrugated rubber drain with a sterile blade and designated as D1.The needle was then advanced further to pierce subarachnoid space. The distance from the skin to the hub of spinal needle was marked as D2 on the sterile corrugated rubber drain.

0.5% hyperbaric bupivacaine was administered via spinal needle in subarachnoid space, the volume of drug being decided by the level of surgical anaesthesia required and the duration of surgery. Skin epidural distance and skin subarachnoid distances were calculated by deducting the calculated distances D1 and D2 respectively from the total length of the spinal needle with stillette removed.

Posterior epidural space width which is the distance between the duramater and the ligamentum flavum was calculated by taking a difference of skin epidural and skin subarachnoid distance, also known as Tip to Tip distance.

The results were subjected to statistical analysis. Descriptive statistics that is mean and standard deviation have been used and t test was applied for continuous variables. Linear regression analysis was performed to calculate pearson correlation with statistical significance. Multiple regression analysis was done to know degree of variability. P<0.05 was considered significant. 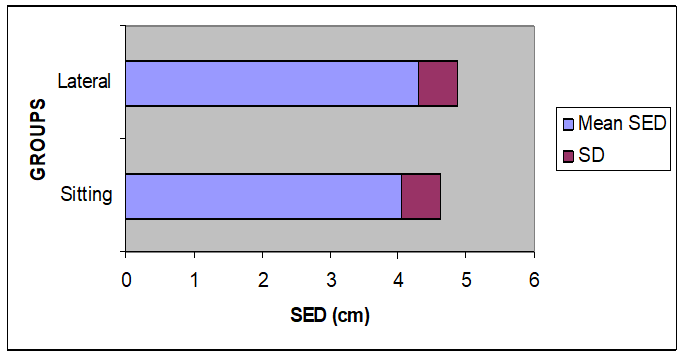 [i] Parameters in sitting position

The skin epidural distance was more amongst males in comparison to females in both lateral and sitting positions, but the difference was not statistically significant, P value 0.293 (P: >0.05)

Comparison between sex and SED 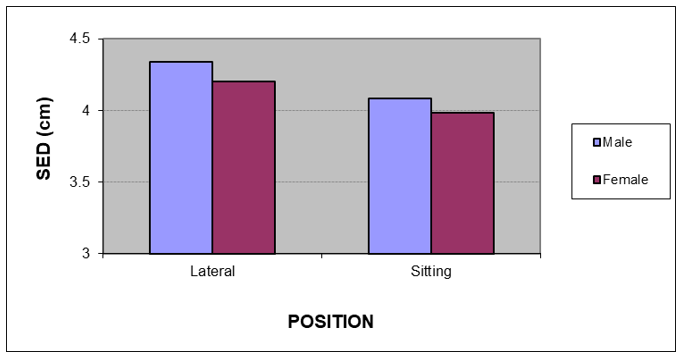 Mean PSED was 0.468+14 cm in lateral position and 0.459+0.14 cm in sitting position, the difference being statistically insignificant.

The posterior epidural space depth was more amongst males in comparison to females in both lateral and sitting positions, but the difference was not statistically significant (P >0.05).

Comparison between Sex and PESD 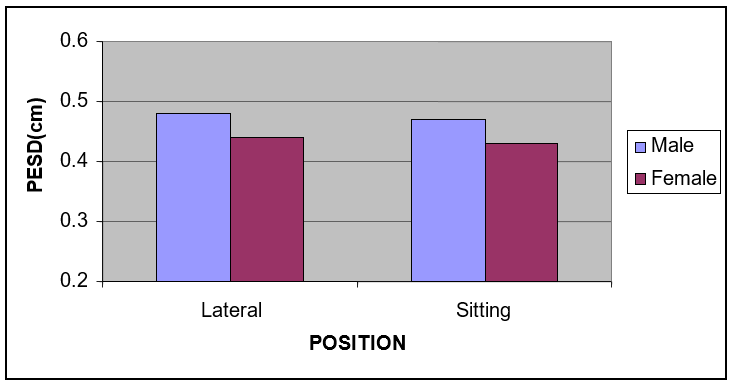 The present study was performed to measure the skin-epidural distance and posterior epidural space depth in an attempt to correlate these distances with age, sex, weight, height, BMI, abdominal girth and position of the patient, with the hope that the incidence of post dural puncture headache (PDPH) may be reduced by guidelines that would emerge from the study.

In our study, there was a positive correlation of skin epidural distance with weight, BMI and abdominal girth of the patient.

In a study by Adegboye MB et al6 the mean skin epidural distance was 4.60±0.83 cm with a range of 3cm-8cm. The distance was significantly influenced by BMI and weight with both having positive correlation and P value of 0.001 and 0.004 respectively similar to our study.

Of the two postures used for performing the block, the skin epidural distance was found to be significantly more in lateral position than in sitting position (P: 0.002). The most probable cause of this difference is stretching and thus thinning of the tissues in the needle path in sitting position, a finding substantiated by Hamza et al7 as well.

The mean posterior epidural space width as derived from our study varied from 0.28-0.97 cm, with mean of 0.468 ± 0.12 cm in lateral and 0.459 ± 0.14 cm in sitting position. 83 percent in lateral and 88 percent of patients in sitting position had posterior epidural space depth in the range of 0.31-0.6 cm. The distance had been calculated by various authors both clinically and radiographically by employing different techniques.

Hoffmann et al8 showed positive significant correlations between the epidural space width and the patient's height, weight-to-height ratio and body mass index. Sang Chul Lee et al11 however showed no correlation of posterior epidural depth with any of the physical parameters. The mean posterior epidural space depth in our study was comparable in sitting and lateral position (P: 0.639).

Familiarity with expected depth of entrance into epidural space and depth of posterior epidural space for given physical parameters of a patient can be of some extra help during performance of central neuraxial blocks. The findings of this study are a step in that direction.

E Stamatakis E Moka I Siafaka E Argyra A Vadalouca Prediction of the distance from the skin to the lumbar epidural space in the Greek population, using mathematical modelsPain Pract2005512534