Materials and Methods: Eighty neonates and infants undergoing general anesthesia with endotracheal intubation were recruited and randomly assigned into two groups:-Oxiport or Miller. (Laryngoscopy performed with Oxiport or Miller Blade respectively). Results were observed in terms of lowest SPO2 attained during Intubation with each Blade, time for 1% desaturation from baseline, desaturation rate, time for intubation and Heart rate.

Conclusion: Apnoeic Laryngeal Oxygen insufflation with Oxiport Blade decreases the incidence and severity of desaturation during intubation in neonates and infants.

Pediatric patients, because of their anatomical differences in airway compared to adults pose many challenges during endotracheal intubation. In neonates, the highly compliant chest wall with a lower functional residual capacity (FRC) and high closing volume results in increased tendency to close at end-expiration.1 In addition, higher oxygen consumption (7 ml/kg/minute)and an immature pulmonary apparatus make them prone to rapid and early desaturation. This is more likely in pre-term babies who have limited respiratory reserve, prolonged as well as recurrent apnoea or difficult laryngoscopies.2

Pre-oxygenation is intended to prevent or delay onset of hypoxia during subsequent apnoea. It was Holmdahl who introduced the concept of apnoeic diffusion oxygenation.3 The theory of apnoeic oxygenation is based on absorption of oxygen into the bloodstream, with the absorbed pulmonary volume being replaced by fresh oxygen pulled from the larynx through the trachea into the lungs. Pharyngeal insufflation of oxygen has been shown to delay the onset of desaturation and hypoxaemia during apnoea by enhancing the safe apnoea duration.4 This technique supplements pre-oxygenation and provides apnoeic diffusion oxygenation during laryngoscopy, significantly delaying the desaturation during subsequent apnoea.5

One such method was fitting a feeding tube to the laryngoscope blade to provide oxygen flow6 or incorporating a channel along the side of laryngoscope blade7 using a suction catheter. However accidental dislodgement and cumbersome attachments resulted in a decline in its usage.

Another method was to provide high flow nasal oxygen insufflation via nasal prongs in critically ill patients while performing laryngoscopy. However entrapment of various amounts of air resulted in a variable amount of oxygen being delivered to the patient.8

Compared to the pharyngeal insufflations, deep laryngeal oxygen insufflation delivers oxygen closer to the larynx. The conventionally used Oxiport blade has no provision for oxygen insufflation. The Oxiport Blade is a modified Miller Blade which has a metallic tube incorporated into Miller Blade that has an attachment through which extra oxygen can be connected and insufflated during laryngoscopy.1, 9

We tested the hypothesis that deep laryngeal oxygenation with Oxiport blade delays the onset as well as severity of desaturation as compared with laryngoscopy without oxygen insufflations.(Miller Blade).

This was a prospective, randomized, controlled time-bound study and randomization was done using sealed-envelope method. A total of eighty neonates and infants in groups of forty each posted for surgery under general anesthesia were included in this study. After obtaining permission from the Institutional Ethical Committee for Human Research, patients posted for surgery were assessed during the pre-anesthetic check-up on the day prior to the surgery. On the day of the surgery patients were shifted to the pre-operative holding area after reassessment by the principal investigator. Full-term neonates and infants upto 1 year of age with birth weight>2 kg of either gender requiring general anesthesia with endotracheal intubation were included in this study. These included surgeries like congenital hernia, meningomyelocele repair, venticulo-peritoneal shunt, cleft lip and palate surgeries. Babies with any known airway anomaly, anticipated difficult intubation, low SPO2 before induction (SPO2<94%), anemia, known congenital heart disease, presence of any respiratory tract infection were excluded from the study. After obtaining parental consent for study and confirming fasting status, babies were wheeled into O.T in a cradle covered with warm-cotton rolls along with their maintenance fluid. Monitoring used included electrocardiograph, pulse-oximeter, capnography, non-invasive blood pressure and skin temperature. The patients were then randomly allocated into two groups of 40 patients each by using randomization using sealed envelope method:-Group O(n=40) and Group M(n=40).

The patients were premedicated with Inj. Glycopyrrolate 0.005mg/kg and Inj. Paracetamol 5 mg/kg IV (5 min. before induction). After Pre-oxygenation for 3 minutes using 100% oxygen on spontaneous ventilation @ 4l/min using Jackson-Rees circuit, induction was done with volatile inhalation induction agent Sevoflurane in incremental doses maximum up to 8% till cessation of spontaneous respiration. Baseline SPO2 was noted at this point.

This was followed by direct laryngoscopy with the designated blade of size 0 or size 1 depending on the age of the baby.In oxiport group,oxygen insufflation was carried out using oxygen @ 2l/min via Auxillary port. (To provide low-flow during laryngoscopy)4 Confirmation of intubation was done by visualization of first square capnographic waveform on the monitor and auscultation of bilateral equal air entry on both sides of the chest. The observations noted were lowest SPO2 attained during intubation with each Blade, time for 1% desaturation from baseline, desaturation rate, time for intubation and Heart rate.

Maximum 2 attempts were provided for intubation following which the case was excluded from the study and intubation was done with conventional Miller Blade.

The study was terminated when SPO2<90% or signs of cardiac instability such as bradycardia developed. Mask ventilation with 100% oxygen was resumed immediately until SPO2 increased to 98-100%.

Anesthesia was maintained with oxygen plus nitrous oxide and variable concentration of inhalational volatile anaesthetic agent sevoflurane. Fluids and blood were replaced as per the requirement. At the end of surgery, N2O and sevoflurane were stopped 10 minutes before end of surgery and patient was ventilated with 100% oxygen.

The patient was extubated when regular spontaneous breathing pattern became established and baby started responding to pain stimuli. Patient was observed post extubation in operation theatre for 15 minutes and then was shifted to recovery room.

All the observed parameters were noted in a master chart and these were then subjected to statistical analysis using MedCalC Software.The results were expressed as Mean±SD. T-test and Chi Square test were used for parametric and non-parametric variables respectively. P-value<0.05 was considered as significant and P-value < 0.001 was considered highly significant.

Sample was collected from 80 patients who consented to participate in the study. Out of 80 patients, 40 were included in Oxiport group and 40 in Miller Group.

Both groups were comparable in terms of age, sex, weight and ASA physical status, pre-operative hemodynamic parameters and time for intubation (P=0.908). 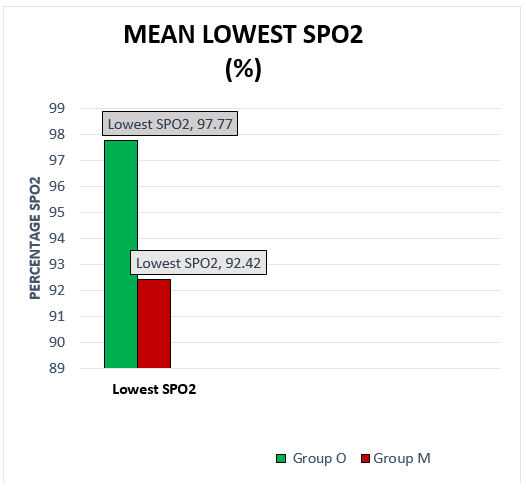 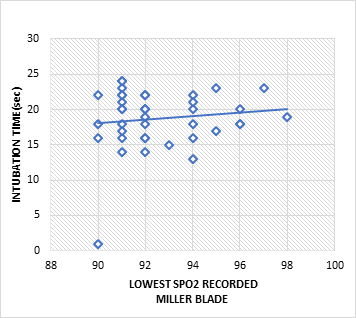 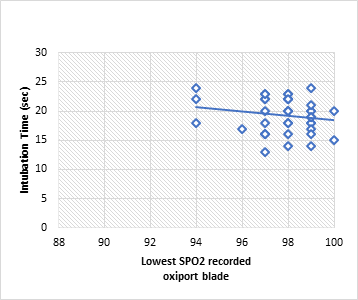 Correlation between intubation time and time to 1% desaturation 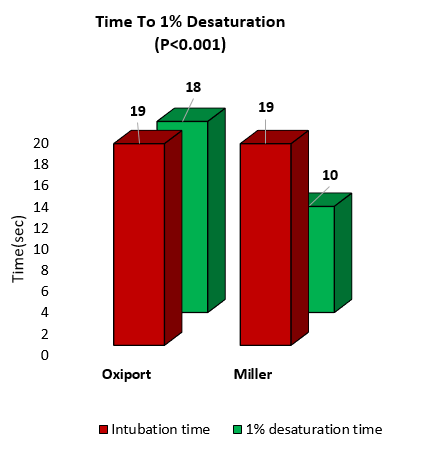 The art of neonatal intubation is a difficult art to learn and a significant time may be taken for successful intubation which can lead to desaturation and/or bradycardia. A number of methods have been used to prevent this which are based on the principle of apneic oxygenation.1

The principle of apneic oxygenation is based on the passive diffusion of oxygen from the upper airways to the lower airways and then into the lungs. It was Holmdahl3 who introduced this concept in 1956 and a number of modifications of this technique have been used since then.However these devices were cumbersome and the most recent device used for this purpose was the Oxiport blade. Since very little literature has been published on the use of this technique in the most vulnerable population i.e. neonates and infants, we conducted this study to evaluate the efficacy of oxygen insufflation via Oxiport blade in comparison to the conventional Miller blade.

In our study the lowest SPO2 recorded with Oxiport blade was 97.77±2.81 and with Miller blade was 92.42±3.71. Thus babies with Oxiport blade had significantly higher saturation as compared with those in Miller blade. These results confirmed our hypothesis.Oxygen insufflation closer to the larynx maintains higher SPO2 in neonates and infants by maintaining higher oxygen partial pressure in the lungs, thereby delaying desaturation. This method increases the safe apnea period by maintaining SPO2 closer to the inflection point of haemoglobin oxygen dissociation curve.

Infants upto 1 year of age were included in our study which is a very vulnerable group in whom the risk of desaturation is highest.Hence the benefit of this device are highest to this population.Moreover only elective surgeries were included in our study. However the results of these study can further be extrapolated to emergency surgeries also who maybe more sick, dehydrated and may have a significant abdominal distension making them prone to rapid desaturation.1

Our studies raise controversies in the current practice of oxygen administration based on the increasing understanding of neonates' oxygen toxicity.11, 12 Alimitation of our study is that “overall desaturation rate” was used to describe desaturation rate ignoring the non-linearity of SPO2-time relationship.

Newer methods incorporating the use of high-flow nasal cannula have been gaining attention recently as they prevent desaturation during endotracheal intubation in adults. Its implications in the pediatric patients is a topic for research.

Apneic laryngeal oxygen insufflation with Oxiport laryngoscope blade decreases the incidence and rate of desaturation with a better hemodynamic stability as compared to Miller blade while intubating neonates and infants. This was easily done as it was non-cumbersome and did not increase the overall cost of anaesthesia.

There are no conflicts of interests.