Anaesthetic management of a case of congenitally corrected transposition of great arteries for non cardiac surgery: A case report

Congenitally corrected transposition of the great arteries (CCTGA) is a rare form of congenital heart diseases, present with or without associated anomalies. It is a complex congenital heart disease with both atrioventricular and ventriculoarterial discordance. Such patients tend to develop systemic ventricular dysfuction with the stress of surgery. Patients with CCTGA are usually diagnosed at early stages of life due to associated anomalies, but they may even remain asymptomatic till later decades of their life. Literature search revealed very few reported cases of anaesthetic management of such high risk cases for non cardiac surgery. These patients have the tendency to develop cardiac dysrhythmias and left ventricular failure during intraoperative and postoperative period. We report anaesthetic management of a case of a 24 years old male with the congenitally corrected transposition of great arteries(CCTGA) who was operated for fracture left distal radius and ulna and right sided galeazzi fracture.

Congenitally corrected transposition of the great arteries(CGTGA) it is a rare abnormality occurring in approximately in 0.5% to 1.4% of all congenital heart disease.1, 2 CGTGA is a complex congenital heart disease characterised by transposed great arteries and inverted ventricles, atrioventricular valves and conduction system but normal atrial situs.(Figure 1, Figure 2) It has both atrioventricular and ventriculoarterial discordance where morphological right ventricle struggles to function as the systemic ventricle pumping against the heavy systemic vascular resistance easily landing up in ventricular failure due to stress like pregnancy or surgery. With increasing age, these patients tend to develop early systemic ventricular dysfunction.3

As age increases, these patients become more susceptible to systemic ventricular, atrioventricular valve regurgitation and ischaemia. Only 10% of the patients with CCTGA do not have any anomalies like VSD, Pulmonary stenosis and valve abnormalities.4 Most of these patients present with complications like systemic ventricular dysfuction, tricuspid regurgitation, heart blocks, and ventricular arrhythmias which can be the cause for morbidity or mortality.5 If asymptomatic, they have normal life expectancy.6 We describe the anaesthetic management of a patient with CCTGA complicated with severe pulmonary stenosis and VSD who presented with trauma to both the upper limbs for surgery.

A 24 years old male presented to pre anaesthesia clinic with complaints of pain and swelling in bilateral wrist due to alleged history of trauma due to hit by buffalo. He was a diagnosed case of congenital cyanotic heart disease with ? TGA since childhood. Further details were not available.

He gave history of bluish discolouration of skin and nails since childhood with dyspnoea on climbing one to two flight upstairs (NYHA-2). He could undertake his routine activities without discomfort. On examination, he had clubbing (Grade 4) and was deeply cyanosed. Pulse-oximetry showed 86% saturation on room air not improving much on oxygen supplementation (92%). His heart rate at rest was 76/min regular, blood pressure 128/80mm of Hg and respiratory rate of 16 breaths/min. Auscultation revealed pan-systolic murmur in left 2nd intercostal space and in right 2nd intercostal space. Bilateral vesicular breath sounds were heard. Abdomen was soft with no palpable organomegaly and no free fluid. Echocardiogram revealed levocardia with abdominal situs inversus, Atrioventricular and Ventriculoarterial discordance, transposed great arteries, large subaortic VSD of 2.9cm(with bidirectional flow) with severe infundibular pulmonary stenosis with moderate TR and MR with biventricular normal function, LVEF 60%.

Patient’s blood investigation showed polycythemia with haemoglobin 19.6g/dl, rest of investigations were within normal limit. After multispeciality discussion among cardiologist, anaesthetist and orthopedician it was decided to operate one limb at a time with interval of one week in between.

Patient was counselled about the pros and cons of regional anaesthesia (peripheral nerve block with standby general anaesthesia). Informed consent regarding risk of intra-operative cardiac events as well as the possibility of post-operative ICU and ventilator requirement along with consent for invasive monitoring procedures was taken.

Our primary plan was regional anaesthesia (USG guided supraclavicular block) with non-invasive monitoring. The back up plan included general anaesthesia with invasive (arterial and central venous line) monitoring. Emergency cardiac drugs and Equipment for transvenous pacing were kept ready inside the theatre.

On the day of surgery, after attaching all the non-invasive multipara monitors patient was supplemented with O2 at the rate of 4 lit/min with Hudson mask. Preop antibiotic was given as per institutional protocol. Under all aseptic precautions USG guided supraclavicular block was given with Inj.Bupivacaine 0.5% 15 ml with addition of clonidine @ 1 mcg/kg.(Figure 4) Adequate analgesia was achieved. Inj.Midazolam 1mg and Inj.Fentanyl 50mcg was given for sedation.

Patient sustained the surgery very well and his intraoperative vitals were stable.(Figure 3) Postoperative recovery was un-eventful with adequate pain control and patient was shifted to post anaesthesia care unit for further observation.

After a week, another limb was operated following the same anaesthesia plan and monitoring. Patient was anaesthetised successfully and the procedure was uneventful and well tolerated by the patient. Patient had an uneventful recovery period and was discharged from the hospital 5 days after the second surgical procedure. 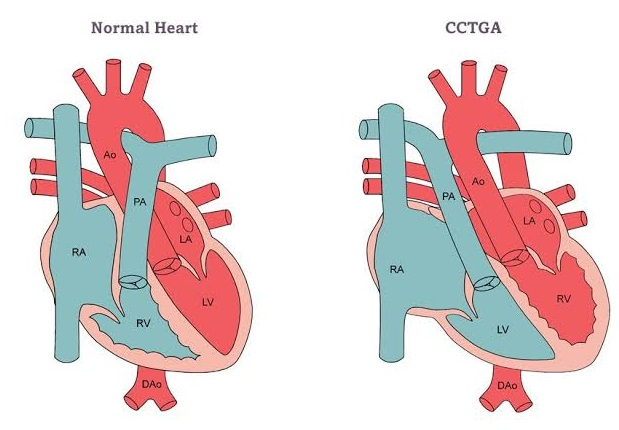 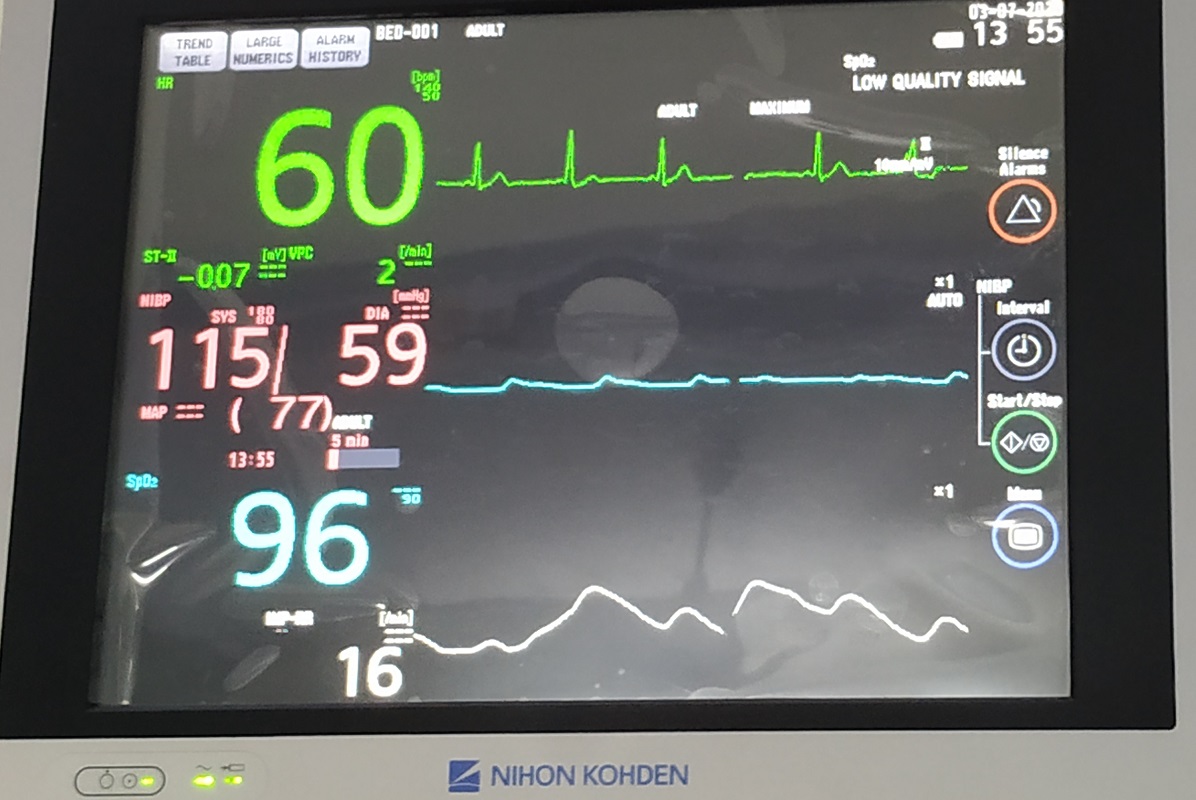 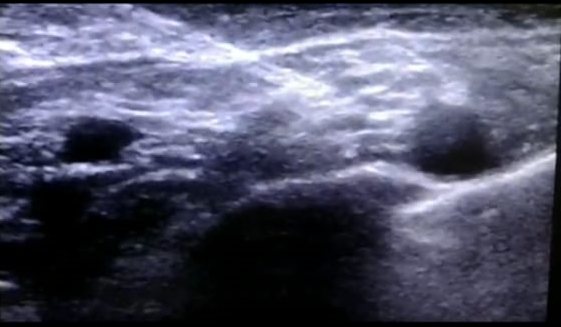 Isolated CCTGA without any associated anomalies is very rare. Uniqueness of this report is that an adult case of hemodynamically well-balanced CCTGA with large VSD with severe infundibular pulmonary stenosis is discussed. To the best of our knowledge there is no literature evidence of management of patient with CCTGA for upper limb surgery.

A major anaesthetic concern in these patients is related to associated anomalies, chances of developing conduction abnormalities and systemic ventricular failure. They are known to develop right ventricular dysfuction leading to congestive heart failure, worsening of atrioventricular regurgitation with age.3 The commonly associated anamolies are ventricular septal defect (60-80%), tricuspid regurgitation, pulmonary stenosis (30-50%) and conduction abnormality. Two thirds of the patient with significant associated defects developed congestive heart failure by the age of 45 years. Systemic Rt.ventricular dysfunction and TR are frequently encountered in patients with CCTGA. Usually with increasing age, these patients present with atrial fibrillation and flutter.7 Every year around 2% of patients with CCTGA acquire complete AV block.8 Displacement of AV node and abnormal course of conduction tissue increases the risk of development of AV block,9 Recently, Zimmermann et al. had reported a case of CCTGA that was diagnosed on presentation of patient with acute myocardial infarction. And was managed with dual chamber implantable cardioverter defibrillator,4 Similarly, Tandon et al. also reported an incidental diagnosis of dextroversion CCTGA in a patient who presented with cocaine-induced acute myocardial infarction,1 One more case report in which patient presented at neurosurgery department with dizziness, seizures, and loss of consciousness, in whom isolated CCTGA with third degree AV block was detected and was successfully managed with VVI mode permanent pacemaker implantation.6 The symptoms commonly associated with occurrence of TR in CCTGA are decreased stamina, dyspnoea, chest pain, and palpitations. In about 20 to 50% of CCTGA patients, TR occurs in varying degree causing substantial morbidity and mortality. It has also been implicated as a cause of ventricular dysfunction.10 Our patient had pulmonary stenosis which creates outflow obstruction in CCTGA which prevents the pulmonary hypertension and morphological right ventricle from failure. In this situation left ventricular pressure compresses the septum which ultimately maintains tightness in tricuspid valve leaflet. Decrease in tricuspid regurgitation leads to improved systemic ventricular function.Because of these favourable changes our patient did not develop major cardiac symptoms. He had cyanosis as the presenting feature because of VSD with bidirectional flow.

Literature evidence for the choice of anaesthetic technique in these patients is very limited. Successful management with general anaesthesia has been reported in one parturient with CCTGA who presented with severe ventricular dysfunction.11 One parturient with CCTGA and complete heart block was successfully managed with combined spinal epidural anaesthesia for caesarean section in two consecutive pregnancies,12 and one parturient of CCTGA with complete heart block was managed with epidural anaesthesia for elective caesarean section The presence of coexisting intracardiac defect and shunt, conduction abnormalities, ventricular dysfunction and ischaemia should be considered before planning anaesthetic management of these patients. Our main concern in this patient was CCTGA and presence of ventricular septal defect. Our anaesthesia goals were to maintain systemic vascular resistance and blood pressure, avoid increase in pulmonary vascular resistance, hypoxia, hypercarbia, acidosis and inadequate depth of anaesthesia. All these goals were to prevent increase in shunt fraction and systemic ventricle failure. With consideration of the goals of hemodynamics management, we planned the case in regional anaesthesia, USG guided supraclavicular block, so as to avoid the myocardial depressant effect of intravenous induction agents, inhalational agents and narcotics. The regional anaesthesia also avoided the pressor response during tracheal intubation. Spontaneous respiration helped in maintaining venous return and pulmonary pressure. The advantages of USG guidance are precise deposition of local anaesthetic agent in the brachial plexus under vision, rapid block onset, reduced dosage of local anaesthetic agent and reduced incidence of complications. The patient was hemodynamically stable throughout the procedure and had an adequate postoperative analgesia with the use of additive.

Every individual with CCTGA has a presence of different combination of cardiac defects, systemic ventricular dysfunction or arrhythmias. The significance of each defect should be considered before planning the anaesthetic management of patients with CCTGA.

The authors declared no conflict of interest.

G Tac¸oy S Kula M Cemri An unusual appearance: a heart in the heart in a patient with congenitally corrected transposition of great arteriesAnat J Cardiol200993E6

R Jalalian S Masoumi A Ghaemian Diagnosis of a congenitally corrected transposition of the great arteries in a 50-year-old multiparous womanCardioVasc J Afr2011224203410.5830/cvja-2010-053