Objectives: To assess and compare the knowledge about adult basic resuscitation amongst interns completing their internship and 1st year MBBS students who underwent three day hands on training in BLS during their foundation course.

Materials and Methods: It’s a cross-sectional observational study using a questionnaire comprising of 19 questions to assess the knowledge of BLS among interns completing their internship and 1st year MBBS students who underwent BLS training during their foundation course.

Conclusion: Knowledge about BLS among medical students who underwent training during foundation course was same like that of interns who studied the earlier curriculum and was poor, hence needs inclusion of periodic revision of the knowledge about BLS in the curriculum.

Invented in 1960, cardiopulmonary resuscitation (CPR) is a simple yet very effective procedure that allows almost anyone to sustain life in the early crucial period after cardiac arrest. American Heart Association (AHA) recommends that all medical professionals involved in patient care either directly or indirectly should know to give basic CPR as they might witness a cardiac arrest in the hospital and knowledge of basic life support (BLS) will be useful. Unfortunately most doctors and paramedical staffs remain unaware of it. Even though a class on CPR and BLS was included in the earlier MBBS curriculum during their final year, most of the medical interns were unaware of CPR and their knowledge about BLS was poor.1 In spite of their rotation in emergency medicine, anaesthesia and medicine, most of the interns at the end of their internship were unaware of effective CPR.1 Identifying this deficiency in the newly qualified doctors, now the MCI has introduced BLS training right from 1st year MBBS, during the foundation course. Primary objective of this study was to assess the knowledge about adult BLS amongst interns (who studied earlier curriculum) completing their internship and medical students who underwent BLS training during their foundation course.

Secondary objective was to see whether 1st year MBBS students score better than interns in BLS knowledge. This study is first of its kind.

We conducted a cross-sectional observational study by using a questionnaire format which had 19 questions pertaining to the knowledge and skills involved in BLS.1 Questions were kept simple since 1st year MBBS students were involved in the study. Yet the questionnaire covered all the basic steps that one has to remember while resuscitating a cardiac arrest victim. Study protocol was approved by the institutional ethical committee. (IEC NO: SIMS&RC/IECC/11/2019) The questionnaire format was given to interns who completed their internship. They were asked to fill the questionnaire in front of the investigator when they came to anaesthesia department for completion at the end of their internship (Jan –Feb 2020). Also same format was given to 1st MBBS students during their dissection period. The answer keys for the questions were prepared from BLS manual from AHA. We excluded those students who were absent during the foundation course. This assessment of medical students was conducted in the month of February, six months after their foundation course.

Questions were mainly intended to know the basic knowledge about resuscitation. Participants were interrogated about the abbreviations of BLS, AED, first step in resuscitation, sequence, rate and ratio of chest compression and knowledge about technique of removal of foreign body obstruction. It was single response multiple choice questionnaire (MCQ) type of assessment on basic CPR. This sought to determine their ability to initiate CPR after witnessing cardiac arrest. Only questions related to chest compression and activating the emergency medical response system were asked and assessed. Scores were given based on correct answers to questions regarding the compression rate, ratio of compression to ventilation, location for chest compression, first step in BLS and sequence followed during CPR. Those who answered all correct were given 100% score, one answer correct 20% score, two answers correct 40% score, three answers correct 60% score, four answers correct 80% score was given. Scores 60% or more were considered as adequate knowledge of BLS. Scores <60% are considered as below average knowledge.

The data was entered in Microsoft excel and the analysis was done using IBM statistical software for social science version 20. The result was obtained in the form of descriptive statistics like mean, percentage, frequency. Chi – square and Mann Whitney U test was used to compare two different groups. If P < 0.05 is said to be statistically significant.

All interns answered to all the questions in the questionnaire. There were 74 interns who participated in this study. But 24 medical students had not filled the response sheet completely. After excluding them, we had 102 students who completed the assessment. We had total of 176 participants (74 interns and 102 medical students) who completed the assessment sheet. All of them had expanded the terminology BLS correctly. All of them were aware of the importance of BLS and recommended its inclusion in the curriculum. (Table 1)

Majority of the interns (87.8%) had observed BLS being done on patients. Whereas 1st year MBBS students had observed the BLS being performed on manikin during the foundation course. None of them had clinical exposure.(Table 2)

Also majority of our interns (75.7%) had performed BLS on patients. Only 17 interns (23%) had attended workshop for training in BLS indicating poor exposure of interns to BLS training. (Table 2)

Self grading of BLS knowledge

Knowledge of individual components of BLS was same among both the groups. Figure 1 (P > 0.05) 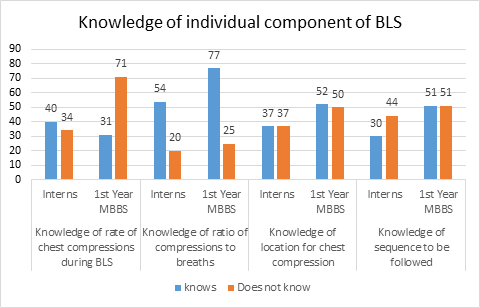 Statistical analysis has shown that scoring of 1st year MBBS students about BLS knowledge was comparable with that of interns who completed the internship and scores were better than the interns who attended the BLS workshop. (Table 4)

Ability to recognise and treat a respiratory and cardiac arrest is a basic medical skill that all doctors are expected to acquire. But there is lack of knowledge about BLS amongst interns, paramedics and most practicing physicians in India.1 In those hospitals where medical and paramedical staffs are well-trained in CPR, over 70% of patients who develop ventricular fibrillation can be resuscitated and 50% survive to be discharged from hospital.2

Western studies since 1980, have shown poor knowledge and skills of preregistration house officers. Since then, continuous efforts are made to train junior doctors in BLS and incorporate BLS in undergraduate medical curriculum. A suggestion was given to teach the BLS at the beginning and end of clinical years and most important, examined both theoretically and practically.3

Indian scenario is no different. Chandrasekaran S and group studied the awareness of BLS among medical students, doctors and nurses of medical, dental, homeopathy and nursing colleges and found it to be very poor which needed improvement.5

Study by Sharma R and Attar N about the awareness of BLS among medical and dental interns completing internship showed overall average knowledge of participants. Those who attended BLS workshop and who had performed BLS during their clinical postings, performed better during assessment indicating the need for structured training of BLS and incorporating BLS in medical curriculum.1

Our study is first of its kind which analysed the awareness and knowledge about BLS amongst medical interns completing internship with that of 1st year MBBS students who underwent BLS training during foundation course. These were the interns who completed their MBBS according to earlier curriculum. Many studies have shown the poor knowledge of medical interns regarding BLS.1, 5 So MCI has introduced 12 hrs of hands on training in BLS in 1st year MBBS during foundation course in the recently introduced competency based medical education (CBME).

Our study results showed that the knowledge of medical students was same as interns completing internship. Interns who participated in this study even though did not undergo formal training in BLS, there was an hour of lecture class included in their curriculum during final year MBBS. Also they had completed their Compulsory rotation ship in emergency medicine, general medicine and anaesthesia during their internship. They were expected to have better knowledge than medical students who did not have clinical exposure. Our study results correlated with the previous studies.1, 5

We conducted this study 6 months after the foundation course with an intension to see the level of retention of knowledge and whether the MBBS students score better than the interns. Results of our study showed that medical students knowledge about BLS was same as interns completing the internship with slightly better knowledge which was not statistically significant (P value 0.21). Overall knowledge was poor. 44.2% of interns and 37% of medical students had below average knowledge which is comparable. Considering the MBBS students who did not fill the questionnaire completely as having inadequate knowledge, the percentage of students having below average knowledge will be still more. The reason for poor knowledge about BLS amongst 1st year MBBS students may be because of training on manikins and no clinical exposure after the training.

As found by Cooper et al there was significant improvement in the knowledge and skills of people who took BLS course six months ago after taking a short ILS (immediate life support) course.7 So a relook is necessary to incorporate BLS during the early clinical exposure (ECE) of medical students. Also the components of BLS should be taught every six months once. It should not be too difficult to introduce a test on CPR during the initial clinical postings and into the final MBBS examination and this might provide a strong encouragement for students to perfect their skills in CPR. Also certification in BLS and advanced cardiac life support (ACLS) to be made mandatory before starting the internship. Medical Council of India has already approved emergency medicine as a separate speciality. Emergency medicine department in co-ordination with department of anaesthesia can take the responsibility of training the medical students, staffs, paramedicals and also conducting periodic refresher courses to maintain the competency.

Limitations of this study were, only knowledge of BLS was assessed in the participants. Practical skills of the participants were not assessed. Also we compared interns who completed MBBS with the freshly joined MBBS students. Considering the results of previous studies, we assumed the knowledge of both groups to be the same and can be compared. Interns who studied according to the earlier curriculum, had a lecture class on BLS during their final MBBS and also they had completed their compulsory rotation ship in all emergency departments. First year MBBS students were trained hands on BLS during their foundation course, even though they didn’t have clinical exposure. So, that way we considered the knowledge about BLS of both groups as comparable.

Knowledge about BLS among medical students who underwent training during foundation course was same like that of interns who studied the earlier curriculum and was poor, hence needs inclusion of periodic revision of the knowledge about BLS in the curriculum.