Background: Anaesthetic management of maxillo-facial surgeries considered as special subset of surgery where the airway management needs proper attention. Most of the time it varies depending on the resources and skill availability. We tried to evaluate the current trend of practices in managing maxilla-facial surgeries among various practicing anaesthesiologists.

Materials and Methods: This is a retrospective questionnaire based survey conducted among practicing anaesthesiologists to determine the trend of practices and institutional protocols followed for maxillo-facial surgeries. A set of questionnaires prepared to ask about the preferred mode of securing airway, frequency of facing complications and plan for extubation and post-operative management.

Results: Total of 86 responses were collected which were analyzed. A total of 91% evaluated the airway with history and physical examination. Fiberoptic broncoscope available in 46% of cases, 51% cases video laryngoscope was preferred as gadget. Naso-tracheal is the commonest route for securing the airway which was preferred by 53% respondents. Only 38% respondents were in favor of extubation of the patients inside the operation theatres after surgery for patients without head injury. In patients with head injury 90% responders believed either a delayed extubation in the ICU or elective ventilation for some hours before extubation is a better option. Most of the anaesthesiologists (61%) preferred shifting the patients to the ICU for post-operative care.

Airway management of maxillofacial surgeries remains a challenge. The issues related to it are pertinent at all three stages of anaesthesia management during pre-anaesthetic evaluation, intraoperative management and post-operative care. The fracture of maxilla and mandible are associated with limited mouth opening due to pain. This limits evaluation of the airway properly. The basic evaluation to detect inter-incisor gap lies with assessing the airway based on history of the patient, like tobacco chewing and ability to open mouth before the trauma. However, it has shortfalls too, as the mouth opening not necessarily correlate with Mallampati grading (MPG), which is a better guide to predict difficult intubation. This also leads to omission of intra-oral pathology evaluation putting the anaesthesiologist at risk of facing more incidences of difficult airway scenarios while endotracheal intubation. Facial injuries are also associated with head injuries and many a times associated with altered sensorium and history of alcoholism add to the problems. The problems related to airway management during induction phase starts with mask holding as it becomes difficult due to associated pain, which may result in compromise in pre-oxygenation. The associated nasal injury creates problems for naso-tracheal intubation, which necessitates shared decision making by surgeon and the anaesthesiologists regarding tracheal intubation options and plan beforehand. Intubation techniques have been evaluated for head and neck surgeries in the past.1, 2, 3 The options to secure airway include naso-tracheal, submental or tracheostomy apart from limited cases of oro-tracheal intubation. Added risk of scarring, trauma to surrounding structures and long term complications of tracheostomy,4, 5 submental intubation is practiced in number of cases to safely secure the airway without interfering the surgical field.6, 7 The gadgets used to secure airway also differs based on preference and availability, however as the associated unreliability of the airway assessment, the airway is assumed to be difficult and video laryngoscopes are frequently chosen as an option for airway intervention.

Extubation of these group of patients need special care as the issues are manifold. Intraoral secretions and inaccessible airway especially in mandibular fixation make the patients prone for airway related complications. Pain management in maxillo-facial surgeries often not given its due importance which may cause trouble. Plan of delayed extubation in post-anaesthesia care units or shifting to critical units is also warranted in some occasions during post-operative care. In our study we tried to identify the current trends of practices in managing maxillofacial surgeries in different set-ups based on a questionnaire survey.

This survey was done with the help of 15-point questionnaire to various practicing anaesthesiologists involved in managing the maxillo-facial surgeries all over the country. The questionnaire was created in a google form and communicated with the clinicians through mobile. Total of 200 anaesthesiologists contacted and sought for a response. The questions were based on current practices related to airway evaluation, management and plan of pot-operative care. The questions were made simple and clear to understand to come to a meaningful conclusion about the outcome. The type of gadget like conventional Macintosh laryngoscope or video laryngoscope used for intubation, and whether rapid sequence intubation was opted as a method was specifically sought for. The initial plan for post-operative care was enquired for patients with and without head injury. The frequency of encountering complications was also enquired to evaluate the problems faced by the anaesthesiologists. Statistical analysis was performed using IBM SPSS (version 20, IBM, I). The categorical variables were expressed as frequencies with percentages. The Chi‑square test was used to assess the distribution of observed variables. P < 0.05 was considered as statistically significant.

Total of 86 responses from anaesthesiologists were collected which were analyzed. Majority of respondents (91%) evaluated the airway with history and physical examination. Radiological method to assess the airway practiced as a routine method in 8% of respondents. Total of 45% respondents believed that alcoholism was the cause for the injury, and 32% respondents believed that facial fracture associated with frequent nasal septum fracture, which compelled to search for alternate route to naso-tracheal intubation. Fiberoptic broncoscope available in 46% of cases, however 51% cases video laryngoscope was preferred as gadget for intubation and 24% of respondents use Macintosh or Mc-coy laryngoscope and used video laryngoscope if intubation becomes difficult. Naso-tracheal is the commonest route for securing the airway which was preferred by 53% respondents, submental intubation was second most practiced method to secure airway in 33% cases. Tracheostomy was the least practiced method in 8.6% cases. On enquiry about the post-operative plan for patients without head injury only 38% respondents were in favor of extubation of the patients inside the operation theatres after surgery, while 43% believed delayed extubation in ICU and 19% were in favor of elective ventilation for some hours after surgery. However, when there is an associated head injury and patient were otherwise fit for surgery with regard to no neurosurgical intervention and safe Glasgow coma scale, 90% anaesthesiologists believed either a delayed extubation in the ICU or elective ventilation for some hours before extubation is a better option. Most of the anaesthesiologists (61%) preferred shifting the patients to the ICU in post-operative period and 32% were in favor of shifting to Post-operative ward. 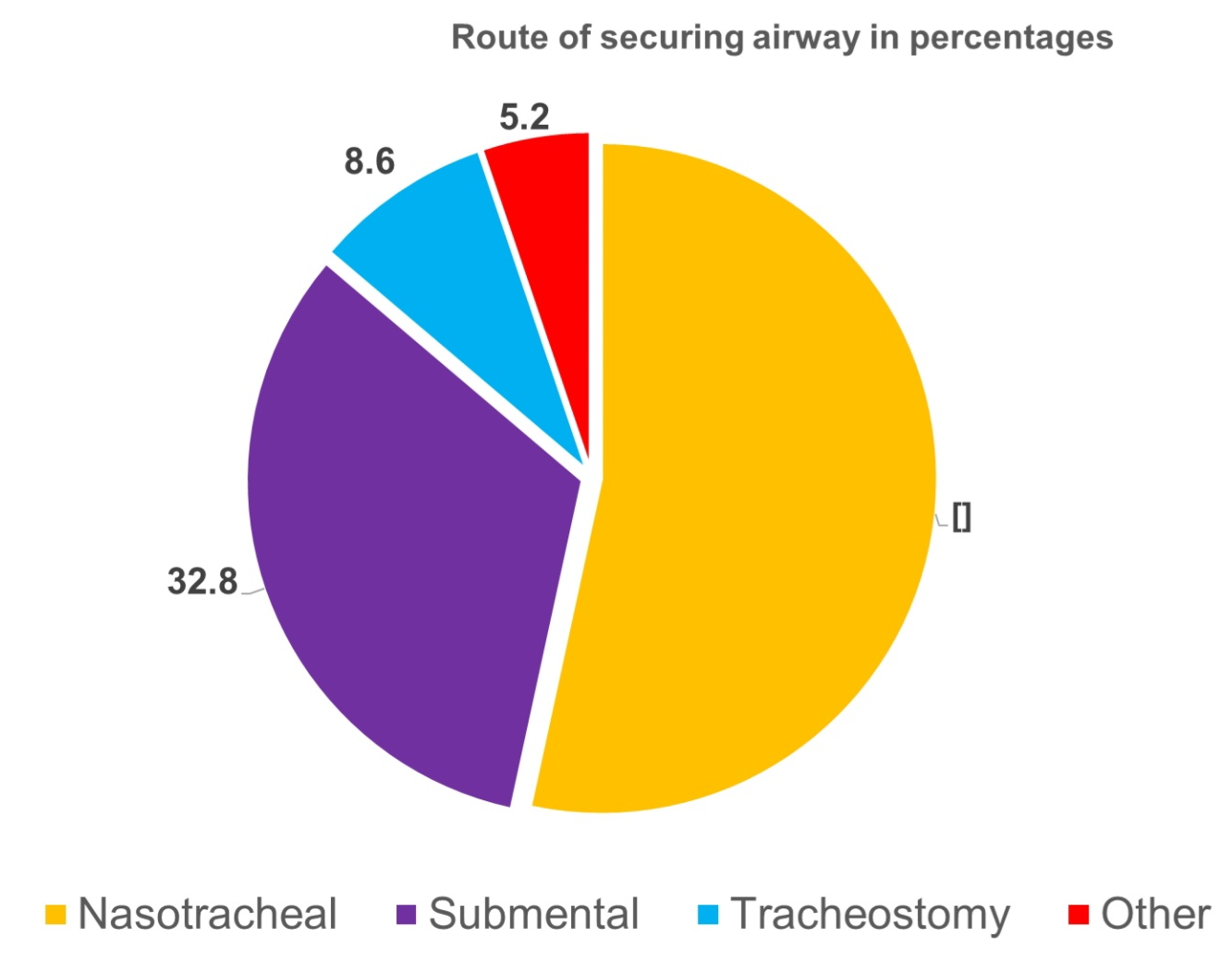 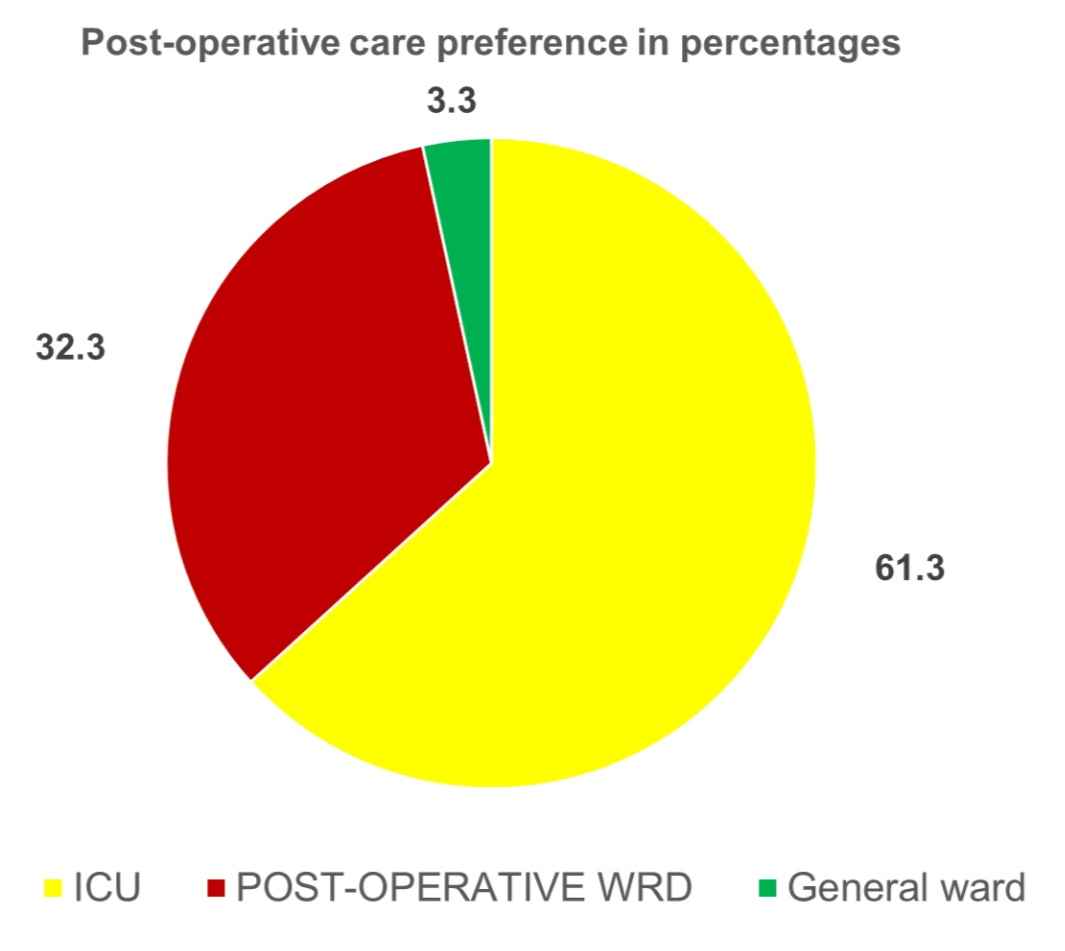 The airway management of maxillo-facial surgeries are varied based on the skill, gadget and the setup. Our study outcome suggests the practice is diverse and based on individual approach. Airway assessment is a difficult task and the history of patient is an important aspect which most of the anaesthesiologists rely on to predict difficult airway. Most of the time history and physical examination of airway is inconclusive and it requires shared decision making with the surgeons to plan the management taking into consideration the associated injuries and postoperative care. Radiological guidance sometimes adds to the clinical assessment to identify difficult airway. Alcoholism is considered as a major risk factor for facial trauma.8 The respondents in our survey also felt that in 45% cases, alcoholism was a major factor for the facial injury. The injuries related to alcohol abuse either can be to the sufferer or the effector of which the later is often difficult to evaluate.9, 10 Video-laryngoscopes facilitates better view and requires shorter intubation time as compared to Macintosh laryngoscopes,11 and it is the preferred gadget for intubation among responders. With the association of trauma and distortion of normal anatomy of the airway the video-laryngoscopes and fiberoptic assistance for intubation is a priority in set up practicing maxilla-facial surgeries. With sharing the airway with the surgeon securing the endotracheal tube is of priority in maxillo-facial surgeries. Nasotracheal intubation is the most practiced method, however with frequent association of nasal septal injury, the alternate route for securing airway is a concern. Submental intubation is an alternate which is the second most practiced method. Retro-molar route is a recent addition to the options however none of the responders practice the method.12 Post-operative care of maxillo-facial surgery needs special attention. The practice of extubation in the operation theatre after surgery is not followed by many of the responders even in cases without head injury. The major reason to this could be fear of residual muscle relaxant effect, pain and post-operative delirium especially in associated risk of alcoholism affects the decision making process. The problem of alcoholism makes the patients prone for withdrawal syndromes. With the procedures of inter-maxillary fixation (IMF) the mouth opening is restricted and altered sensorium at the time of extubation poses threat to the patient with some case reports of even aspiration of small fragments of IMF wire during emergency management of airway.13 Delayed extubation in the ICU is the preferred modality among the responders. Some responders believe elective ventilation in the ICU for some hours makes the weaning process from anaesthesia and ventilation smooth, probably the acute pain after surgery being taken care of with the above method.

Apart from the problems related to the management of airway, to perform maxillo-facial surgeries it needs proper infrastructure and resources. The intra and post-operative care needs special care which affects operation theatre effective utilization. Most of these cases take significantly higher time for induction as well as extubation as compared to other surgeries affecting the additional cost to the surgeries. Moreover, appropriate decision making is utmost priority for these surgeries to prevent critical events during management.

There are some limitations to our study. The responders may not be the decision making authority, and may merely follow institutional protocol, in which case multiple entry could have affected the outcome. True number of incidences were not evaluated. As some of the questions are related to patient management, it can vary as per the situation. Complication incidences were not evaluated. Some centres place of post-operative care might be influenced by surgeons and where ICU is not available there is limited option for answering the queries.

The anaesthetic management of maxillo-facial surgeries need special attention. It necessitates proper pre-operative evaluation and shared decision making with the surgeons for management of the airway. Optimal resource and skill is necessary for managing these group of patients. Careful decision regarding managing the airway through alternate to naso-tracheal route will prevent stigma of scar, long term complications of tracheostomy. Timely decision of extubation will help in adequate utilization of resources and prevent additional cost to the surgery.