Vishwanath and Safneedha: The efficacy of thoracic epidural anesthesia for breast surgeries

The efficacy of thoracic epidural anesthesia for breast surgeries

Materials and Methods: This prospective cross-sectional study was conducted in the department of Anaesthesiology in association with the Department of Surgery at Raja Muthaiah Medical College and Hospital, Chidambaram from January 2013 to June 2014. Adult female patients aged between 18-60 years belonging to ASA class I, class II and class III undergoing breast surgeries were included in the study. Patients with bleeding diathesis and local infections were excluded from the study. A total of thirty cases were included in the study and efficacy of epidural anaesthesia was determined by monitoring vitals in the peri-operative period. Results were analysed using Statistical package for Social Sciences (SPSS) version 17.

Results: Heart rate, blood pressure (both systolic and diastolic) and mean arterial pressure were significantly different with respect to time. Mean duration of rescue analgesia was found to be 127.33±27.62 minutes. Also 10%, 23.3%, 13.3% and 6.7% of cases reported bradycardia, shivering, hypotension and nausea during the intra operative period whereas 10% of cases reported backache and nausea, each during the post-operative period.

Major surgery induces profound physiological changes in the peri-operative period, characterized by increase in sympathoadrenal and other neuroendocrine activity and also an increased cytokine production. As epidural anesthesia can attenuate this “stress response” to surgery, improve the quality of postoperative analgesia in comparison with systemic opioids and hasten recovery of gut function, it had been suggested that conducting surgery under epidural anesthesia may reduce peri-operative morbidity and mortality compared with general anaesthetic alone.1

All segments from the spinal canal from the base of the skull to sacral hiatus are available for epidural injection and epidural analgesia can be adapted to almost any type of surgery below chin,2 Dawkins and Steel3 reported that ideal conditions for any thoracic surgery can be obtained by instilling the local anaesthetic agents into the epidural space at the midpoint of nerve supply to the site of operation.

This Prospective cross sectional study was conducted in the department of Anaesthesiology in association with department of Surgery at Raja Muthaiah Medical College and Hospital, Chidambaram from January 2013 to June 2014. Adult female patients aged between 18-60 years belongs to ASA class I, class II and class III undergoing breast surgeries were included in the study. Patients with bleeding diathesis and local infections were excluded from the study. A total of thirty cases were included in the study.

All study participants were assessed for general physical examination including airway assessment, spine and systemic examination was done to confirm the previously mentioned inclusion and exclusion criteria. Investigations (including blood and imaging techniques) were done to assess the ASA class also.

All the patients were advised to remain nil per oral after midnight and were given tab Diazepam 10mg orally the night before surgery and 5 mg 2 hours before surgery. On the day of surgery in the anaesthetic room, an 18 gauge i.v. cannula was inserted and the patients was preloaded with 500 ml Ringer Lactate solution over a period of 15 to 20 min. Basal vital parameter like pulse rate, blood pressure, ECG, respiration, oxygen saturation were recorded. Primary outcome to assess the effectiveness of thoracic epidural anesthesia in breast surgeries using 1.5% lignocaine with adrenaline was done using the parameters like level of blockade, duration of analgesia, time of rescue analgesia, hematological parameters and complications.

The patient was positioned in lateral or sitting position with the help of an assistant, under aseptic precaution, the back was prepared with 5% Povidone iodine solution, spirit and the area was draped. The inferior angle of scapula which corresponds to T7 spine was palpated and the space above which is T6 – T7 was located. The skin was infiltrated with 2ml of 2% Lignocaine and after 60 – 90 seconds, a Tuohy needle 18G or 16G was introduced by paramedian approach in T6 – T7 space and advanced obliquely at 45 degrees to the skin till the needle was steady in the interspinous ligament.

The stylet was removed and a 5cc dry glass syringe with an air column of 3cc was attached firmly to the hub of the needle. This unit was carefully advanced with 45 degree angle and constant pressure applied on the plunger of the syringe (loss of resistance technique). As long as the needle point was in the ligaments there was relative or absolute resistance to injection but as the point emerged from the ligamentum flavum onto the thoracic epidural space, resistance suddenly disappeared.

After confirmation of loss of resistance in air, 18G or 16G epidural catheter was threaded through the epidural needle into the epidural space in cephalad direction upto about 4 to 5 cm. The epidural needle was steadily pulled out without disturbing the catheter. The catheter was well secured with plaster and patient was positioned. After identifying the epidural space test dose of 3 ml of 2% Lignocaine with adrenaline was administered after negative aspiration for blood or Cerebrospinal Fluid (CSF). The patient was observed for 5 minutes to ensure that the injection was not into the subarachnoid space or epidural vessels. Once it was made sure that the catheter is safely secured in the epidural space and 15cc of 1.5% Lignocaine with 15 mg of epinephrine was injected through the catheter and observed for the response. Results were analyzed using Statistical package for Social Sciences (SPSS) version 17.

Mean systolic and diastolic blood pressure at different time intervals are shown in table 3 and its difference with respect to time was found to be statistically significant. 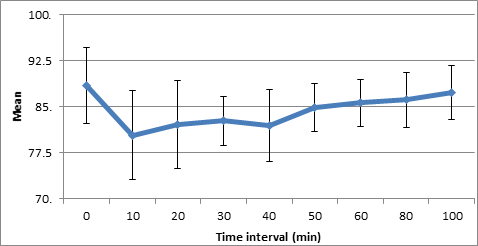 Mean SpO2 of the study participants at different time intervals are shown in the Figure 3 and the average SpO2 was reported as 98.0±0.9. The difference in mean SpO2 with respect to time intervals was found to be statistically significant (p<0.000).

Duration of rescue analgesia and complications

The present study of thoracic epidural anesthesia for breast surgeries using 1.5% of lignocaine with adrenaline was conducted among 30 adult female patients undergoing various breast surgeries. The time of onset of sensory block was noted as the interval between the drug injections to the development of upper level of sensory block. In the present study, the mean duration for onset of analgesia was found to be 10.26 ± 2.58 minutes which was comparable with similar studies done by Kilichan et al,7 Bromage et al.2 and Niemi et al.8 which reported 12±8 minutes, 19 minutes and 9.1±8.2 minutes, respectively.

In our study there was no incidence of hypoxia as assessed by pulse oximeter, no respiratory depression or paradoxical breathing. Sakura et al.9 have shown that thoracic epidural anesthesia does not impair the ventilatory response to progressive isocapnic hypoxemia. Thus thoracic epidural anesthesia can be used in patients with COPD who are dependent on hypoxic drive for ventilation. Tenling et al.10 observed similar findings with reduction of VC and FEV1 only by an insignificant 10% from baseline. Thoracic epidural anesthesia reduces the cardiac output, reduces systemic vascular resistance and fall in blood pressure due to a larger number of vasoconstrictor fibres are blocked, level of blockade is close to cardiac sympathetics so any overshoot may cause block of cardiac acceleratory fibres (T1-T4), and splanchnic nerves T6-L1 is blocked resulting in decreased catecholamine secretion from adrenal medulla and venous pooling in splanchnic circulation.11

In our study, the level of sensory blockade was from T1 – L2, which was evidentially comparable to similar studies done by Nygard et al.12 and Olausson et al.13 where they reported the level of sensory block as T2-T1 and T2-T12, respectively. In the presence of inhibition of cardiac sympathetic fibres which usually originate from T1 – T4 and decrease in central venous return can eventually cause sudden onset of bradycardia and cardiac arrest.14

Nygard et al.12 observed a decrease of 8 per minute from that of pre operative heart rate at the end of 20 minutes. Similarly Olausson et al.13 observed a decrease of 9 per min from that of pre operative reading. Both the studies correlate to our finding of a decrease of 11 per minute from the pre operative reading which is found to be very significant. In our study majority of the cases had a fall in blood pressure. The average mean arterial pressure pre-operatively was 88.40 ± 6.20 mmHg which declined gradually to reach a minimum level of 82.10 ± 7.10 mmHg at 30 minutes. Later on the mean arterial pressure began to rise and at 120 minutes it reaches to 86.10 ± 4.49 mmHg which was slightly less than the preoperative level. Similar changes were observed in systolic and diastolic blood pressure.

Thoracic epidural anesthesia for breast surgeries provides good analgesia with minimal amount of drugs. With significant hemodynamic changes, peri-operative complications were minimal and no respiratory or cardiac arrest was noted. There was no incidence of post operative neurological complications. Thus we conclude that thoracic epidural anesthesia is an attractive option for breast surgeries.

I am thankful to my study participants, without whom, this study would not have been possible.