Effect of dexmedetomidine on hemodynamic and recovery responses during tracheal extubation

Objective: To assess the effect of dexmedetomidine on hemodynamic and ventilatory recovery during tracheal extubation.

Materials and Methods: This comparative study was done in 42 patients who fulfilled the inclusion and exclusion criteria between the age group of 20 to 45 years from both sexes were randomly allocated in to two groups of 21 each. One group received 0.5mg Dexmedetomidine and the other group received 100 ml NS. Both groups were compared for the hemodynamic parameters at different time intervals during the whole procedure and were compared for differences if any.

Results: In the study group, parameters like Mean arterial pressure, Systolic Blood Pressure, Diastolic Blood Pressure and Heart Rate were under control than the control group. The extubation quality score between controls and dexmedetomidine group (2.14 vs. 1.24) is statistically significant (P<0.001). 14.28% of study group had cough compared to 52.39% in the control group. Bradycardia and Hypertension were significantly higher in the study population.

Conclusion: Just before extubation, administration of dexmedetomidine ensures the smooth extubation of the trachea and reduces the cardiovascular responses. It also provides adequate sedation postoperatively.

During surgery, tracheal intubation is done to maintain a patent airway and to facilitate tracheal suctioning. Weaning of an artificial ventilation after surgery when the need for it no longer exists is known as tracheal extubation. Reflex reactions like tracheal and laryngeal irritation can occur during extubation with mild or no sedation.1 Breath holding, straining, coughing or laryngospasm should not be there during extubation.2 Weaning from anesthesia and ventilatory support can be linked with rise in plasma catecholamines, tachycardia and hypertension causing elevated myocardial contractility and systemic vascular resistance.3

The carbon dioxide insufflations and pneumoperitoneum required in laparoscopic surgeries may lead to an increase in plasma renin activity, adrenaline, nor‑adrenaline levels thereby resulting in increase in systemic and pulmonary vascular resistance, hypertension, tachycardia, and a compromised cardiac output. Further the reverse Trendelenburg position during surgery reduces venous return and hence further reduction in cardiac output. These hemodynamic changes predisposes the myocardium to ischemia which might be life threatening in a susceptible patients at the time of extubation.4

Several hypotheses have been put forward for the sudden increase in heart rate (HR) and blood pressure (BP) during extubation. Factors during emergence like catecholamine surge, irritation of the airway, post surgery pain can contribute to the changes in vitals. Though temporary and short, these changes are of major concern for an anesthesiologist.5

The peak changes occur the first minute following extubation and may prolong for about 10 minutes. These changes are tolerated by most of the patients without any serious consequences. Patients suffering from systemic diseases like coronary artery disease, diabetes, hypertension may or may not tolerate these hemodynamic responses.3

Dexmedetomidine, a highly selective α2-adrenoreceptor agonist, induces sedation and analgesia without affecting the patients current respiratory condition.2 It is eight times more potent than clonidine in suppressing catecholamine release in response to stress.3 Intravenous administration of dexmedetomidine throughout perioperative period has been found to decrease serum catecholamine levels by 90%, thereby reducing the hemodynamic response to laryngoscopy, tracheal intubation, pneumoperitoneum and extubation. It also provides sedation without causing respiratory depression thus minimizing the post‑operative analgesic requirements.4 From the available literature, it is evident that there is a significant reduction in circulating catecholamines, which reduces incidence of hypertension and tachycardia.

Hence this study was initiated to assess the effect of dexmedetomidine on hemodynamic parameters and recovery responses during and after the tracheal extubation.

This is a prospective comparative study. Institutional Human ethical committee approval was obtained before the start of the study. 42 patients between the age group of 20 to 45 years from both sexes were randomly allocated in to two groups. Inclusion criteria includes, subjects fulfilling the physical status I and II according to American Society of Anesthesiologists (ASA) and those who are scheduled for elective general surgical, urological and gynecological procedures without comorbidities.

Those patients who fulfilled the inclusion criteria were explained about the rights of the patient, objective of the study and written informed consent was obtained from all the study participants.

Before the surgical procedure, patients were kept on NPO (nil per oral) for a duration of 6 hours. All patients were uniformly premeditated with Inj. Glycopyrrolate 0.2mg IM 30 minutes before shifting to operation theatre.

Upon arrival of the patient in the operation theatre, intravenous access with 18 G cannula was inserted. Isoflurane, fentanyl, Propofol, nitrous oxide-oxygen, and vecuronium were the standard anesthesia drugs and techniques used for both the groups. Standard monitoring comprised of non-invasive blood pressure, EtCO2 ECG and pulse oximetry (Spo2).

Bradycardia was defined as a heart rate of less than 60/min. If bradycardia is associated with hemodynamic instability it must be treated with intravenous atropine (0.6 mg).

Hypotension was defined as a decrease in a mean arterial pressure of less than 60 mmHg or systolic blood pressure of more than 30 mmHg from baseline. It was corrected with intravenous fluids and 3 mg of IV mephentermine was given in few required cases.

The hemodynamic parameters were assessed and recorded in both the groups. Data was entered in Microsoft Excel and analyzed using SPSS (Statistical Package for Social Sciences), version 21. Student T test was used to compare the mean values of different parameters. Fisher exact test was used to assess the hemodynamic responses and adverse events between the groups. P value <0.05 was considered as statistically significant result.

The heart rate, SBP, DBP, MAP of dexmedetomidine group was more or less maintained around the normal range while in NS only group there was an increase after 5th minute of stopping the inhalational agent. Further there is a statistically significant increase in these values after extubation in the control group when compared to dexmedetomidine group from the fifth minute of giving the drug till 15 minutes after extubation. (Table 1, Figure 1, Figure 2, Figure 3, Figure 4)

The mean extubation quality score for NS only group was 2.14 while that of Dexmedetomidine group was 1.24. Around 65.48% of study population were extubated without severe cough. The results are statistically significant. (Table 2)

Elevated blood pressure was seen only in 9.5% of dexmedetomidine group when compared to the control group (81%). Cough was present in 14.28% of dexmedetomidine group and 52.39% of NS only group. Hypotension was not observed in the control group but was present in 19% of study population. Around 9.5% of study group had experienced bradycardia as compared to none in the controls. All these results were statistically significant. Laryngospasm, bronchospasm, desaturation and undue sedation was not found in both the groups.(Table 4)

Comparison of hemodynamic parameters between the groups at various time intervals until 15 min after extubation.

Comparison of extubation quality score between both groups

Comparison of Ramsay score between both groups

Comparison of side effects between the dexmedetomidine group and the controls

Comparison of HR (beats/min) between study and control group 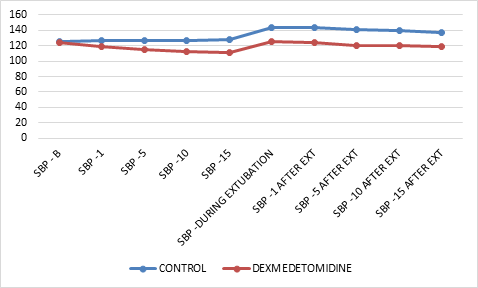 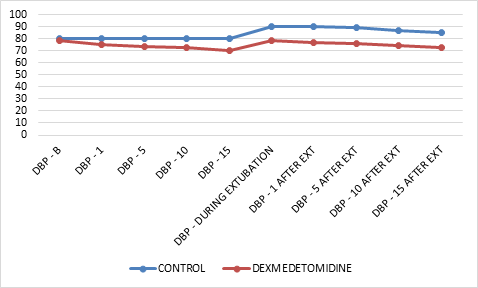 All these changes usually resolve soon, and they are tolerated by most of the patients, but may be deleterious in certain patients.1

The present study was initiated to evaluate the hemodynamic response of dexmedetomidine during extubation, the quality of extubation, the level of postoperative sedation, complication rate, hemodynamic stability, analgesic effects and lack of respiratory depression, along with its relatively shorter half-life.

Dexmedetomidine activates vasomotor center receptors in the medulla and decreases the noradrenaline turnover and central sympathetic outflow. This has resulted in the maintenance of regular sympathetic function like blood pressure and heart rate.1, 3 During extubation, all the hemodynamic parameters like blood pressure, mean arterial pressure and heart rate were significantly stable in the study group than the control group. Our findings are consistent with other studies which proved that intravenous administration of dexmedetomidine stabilizes vascular hemodynamics, offers smooth extubation and a much more easy and comfortable recovery.1, 2, 3, 4, 5, 10, 11, 12

Anxiolytic and sedation effect of dexmedetomidine are due to the inhibition of sympathetic outflow and stimulation of parasympathetic division from the locus coeruleus in the brainstem. α2 A and α2 C receptor stimulation in locus coeruleus induces sedation. α2 A and α2 C receptors activation in spinal cord alleviates pain transmission due to decreased release of substance P. Reduction in the norepinephrine release from locus coeruleus stimulates the firing of inhibitory neurons like g-amino butyric acid system, which in turn causes adequate sedation and anxiolysis. α2 agonist sedation can be easily aroused and patients co‑operate during procedures and also respond to the verbal commands.1, 2, 3

Dexmedetomidine activates the imidazoline-preferring receptors, α2 adrenoceptors, or both in the nucleus tractus solitarus (ventrolateral part of medulla) lowers the heart rate.1 Our study results have shown that dexmedetomidine group had significantly higher incidence of hypotension and bradycardia than the control group. Similar results were observed in other studies too.1, 3, 4, 5, 10, 11 In a study done by Goel et al.,12 there was an equal prevalence in both groups. Lawrence et al.13 in his study noted that bradycardia occurred only during 1st and 5th minute during extubation.

There was a insignificant difference in occurrence of vomiting between both groups (Table 4) as that of other studies.1, 3

Similar study by Guler et al.15 had also emphasized that desaturation, bronchospasm respiratory depression, coughing, laryngospasm and undue sedation were not found in any of the two groups (Table 4).

Intravenous administration of dexmedetomidine just prior to extubation minimize the hemodynamic responses to it. Postoperatively it offers smooth tracheal extubation and better sedation. Hypotension and bradycardia due to the administration of dexmedetomidine in few cases is treatable. Life threatening complications like bronchospasm, laryngospasm, respiratory depression and undue sedation can be prevented while using the drug during extubation.