Introduction: Spinal anaesthesia is preferred for lower abdominal and lower limb surgeries. Bupivacaine is the most popular local anaesthetic for subarachnoid blockade because of less neurotoxicity. Intrathecal bupivacaine alone may be insufficient to provide prolonged post-operative analgesia, even with high sensory block. So, various adjuvants are used like ketamine, midazolam, clonidine, opioids, neostigmine etc. to prolong the effect of local anaesthetic.

Aims: To compare the effect of intrathecal fentanyl and fentanyl-midazolam combination with hyperbaric bupivacaine for quality of anaesthesia and post-operative analgesia.

Results: There was a significant difference in onset and duration of sensory and motor block, time to administer first rescue analgesia in group B.

Concept of post-operative analgesia is gaining importance in elective, emergency and day care surgeries due to number of advantages:

Fentanyl, a lipophilic opioid, after intrathecal administration diffuses into epidural space and subsequently into the plasma, suggesting that it acts not only through spinal opioid receptors but also systemically. Fentanyl added to bupivacaine intrathecally provides better surgical anaesthesia and increased reliability of block than intrathecal bupivacaine alone.6

Study was conducted on 60 patients aged 20-60 years, of either sex, ASA grade 1 or 2 posted for lower limb and lower abdominal surgeries after taking approval of the ethical committee.

All patients were randomly divided into two groups of 30 patients each.

Total volume of drug is 3.5 ml in both groups.

All the patients were evaluated preoperatively and those having history of allergy to drug & having any spinal deformity or infection on back, psychiatric illness, head injury was excluded from the study. Patients using any drug that modifies pain perception & on anticoagulants were excluded from study.

Detailed preoperative history of present illness & past history of illness/surgery/anaesthesia was taken & systemic and general examination was done on the previous day of surgery.

Back of patients were examined to rule out any spinal deformity & infection at local site.

Procedure & VAS score were explained to the patients.

Written informed consent was taken from the patient and his/her relatives.

Patients were kept Nil by mouth for 6 hours prior to surgery.

In the operation theatre

Patients were assessed for degree of alertness/sedation & scoring was done as follows. (Table 2)

After establishment of adequate level of block, surgery was started and time of beginning and duration of surgery were noted.

Intravenous fluids were administered depending on the requirement of the patient.

Patients were given O2 by ventimask at 4 L/min.

No sedative or analgesic medication was used during perioperative period.

Hypotension was defined as decline in systolic blood pressure >20% from the baseline and treated with injection Mephentermine 6 mg i.v. and intravenous fluids.

Shivering was treated with 100% oxygen, warm fluids and adequate covering.

Patients were monitored postoperatively for every half an hour till 5 hours and then every 1 hour till 12 hours after giving spinal anaesthesia.

Patients were inquired frequently for the degree of pain they felt with the help of visual analogue scale (VAS) and the time for the demand for analgesia was noted.

VAS involves use of a 10cm line on a piece of white paper and it represents patient’s opinion of degree of pain. It was explained to all patients preoperatively that one end of the line i.e. ‘0’ marks “no pain" at all, while other end i.e. ‘10’ represents "worst pain" patient ever felt. Patient was asked to rate the degree of pain by making a mark on the scale. Thus, the pain score was obtained by measuring the distance from the ‘0’ end to the indicated mark.

No analgesic was given unless requested by the patient or VAS score ≥4. Time to first dose of rescue analgesic was noted & time for regression to S2 dermatome was noted.

Statistical analysis was done using SPSS software. Data was expressed as mean, mean + SD and percentage. Data were compared using t- test(unpaired). The level of significance was kept at 5%.

Table 4 shows demographic data of all the patients of both groups, which were comparable (p>0.05) in respect to age, height, weight, and ASA grading.

Characteristics of sensory and motor block and total duration of analgesia in minutes (Mean±SD):

There was significant difference in both the groups. (p <0.05)

It also compares time to administer first rescue analgesia & time for regression of sensory block to S2 dermatome. There was significant difference in both the groups. (p <0.05)

Table 6 compares peri-operative hemodynamic parameters of both groups. All data were clinically comparable as p>0.05. 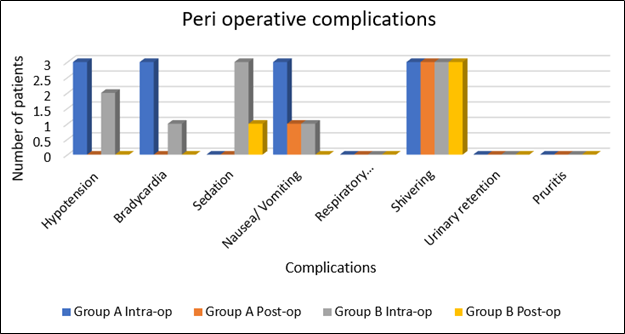 Respiratory depression, urinary retention and pruritus were not seen in any of the groups peri-operatively.

Lower abdominal and limb surgeries are performed under spinal anaesthesia, as it is easy to perform, single shot technique when compared to epidural and general anaesthesia. But its main drawback is that the analgesia is of limited duration. Hence, additives which cause the prolongation of the duration of motor as well as sensory block will be beneficial in reducing the morbidity of the patients in the postoperative period.

Several studies suggest midazolam as an effective adjuvant to prolong the duration of the subarachnoid block and spinal analgesia with better hemodynamic stability.12, 13 Many studies showed that there is synergism between intrathecal midazolam with local anaesthetic agents.8, 14, 15, 16, 17, 18, 19, 20, 21, 22

The selection of dose of midazolam of 1 mg is based on the fact of several previous studies which suggest that duration of analgesia could be prolonged by 1 mg midazolam without additional side effects.8, 16, 17, 18, 19, 22

Fentanyl is a synthetic lipophilic µ receptor agonist opioid with a rapid onset of action and unlike morphine, has fewer tendencies to migrate rostrally to the fourth ventricle in sufficient concentration to cause delayed respiratory depression.23 It exerts its action through opioids receptors on the dorsal horn of spinal cord. It may have supraspinal spread and action. Studies24 on animals suggested a synergism between opioids and local anaesthetic agents, they showed specific enhancement by opioids on the effects of intrathecal local anaesthetic agent on nociceptive afferent but not on sympathetic efferent pathways.

Late rostral spread with small dose intrathecal fentanyl is less and studied by Harbhej Singh et al.25 and Dalhgren G et al.26 and they concluded that 25 mcg fentanyl is the safest dose. Hence, we have chosen dose of fentanyl 25 mcg.

In this study the demographic characteristics (age, sex, weight, height) and ASA status were not statistically significant between both groups of 30 patients each. (p>0.05)

All the patients in both groups were comparable in terms of haemodynamics perioperatively and sedation. (p>0.05)

There were no significant side effects in both groups in our study.

Syed Ali Aasim et al. 32 in 2015 compared the analgesic efficacy and safety of intrathecal midazolam(1mg) and fentanyl (25 μg) as an additive agent to bupivacaine for lower abdominal elective surgeries and concluded that midazolam is as effective as fentanyl in prolonging the durations of both sensory block and analgesia with less side effects like hypoxia, hypotension, bradycardia or respiratory depression. Six patients (30%) complained of pruritus in the fentanyl group while no one in other (p <0.01).

Anirban et al.17 in 2013 concluded that the addition of 2mg preservative free midazolam to 0.5% hyperbaric bupivacaine for subarachnoid block in infraumbilical surgery prolongs the duration of effective analgesia as compared to bupivacaine alone and delays the need for postoperative rescue analgesics without having any sedative effect.

Rajni Gupta et al.13 in 2011 evaluated the onset and duration of sensory and motor block, hemodynamic effect, postoperative analgesia, and adverse effects of dexmedetomidine (5 μg) or fentanyl (25 μg) given intrathecally with hyperbaric 0.5% bupivacaine & concluded that intrathecal dexmedetomidine is associated with prolonged motor block (421 ±21 min) as compared to fentanyl (149.3±18.2 min). However, there was no significant difference in onset of motor block.

Farhad Saffari et al.20 in 2012 demonstrated the possible effect of intrathecal midazolam(1mg) compared with bupivacaine as adjuvants in spinal anaesthesia in chronic opium abusers and concluded that it increases the duration of sensory block (140 ± 22 min) as compared to intrathecal fentanyl with bupivacaine (107 ± 18 min).

Yegin et al.22 in 2004 evaluated the analgesic and sedative effects of intrathecal 2mg preservative free midazolam in perianal surgery under spinal anaesthesia and concluded that the addition of bupivacaine produces a more effective and longer analgesia with mild sedative effect.

I Mcconachie Anaesthesia for the high-risk patientCambridge University Press2002704

F Safari A Dabbagh M Sharifnia The effect of adjuvant midazolam compared with fentanyl on the duration of spinal anesthesia with 0.5% bupivacaine in opium abusersKorean J Anesthesiol2012636521610.4097/kjae.2012.63.6.521

C Wang MK Chakrabarti JG Whitwam Specific Enhancement by Fentanyl of the Effects of Intrathecal Bupivacaine on Nociceptive Afferent But Not on Sympathetic Efferent Pathways in DogsAnesthesiology19937947667310.1097/00000542-199310000-00019