Meena, Raiger, and Singhal: An evaluation of efficacy of addition of dexmedetomidine /clonidine to fentanyl in attenuation of pressor response of laryngoscopy and intubation: A prospective double blind randomized controlled trial

An evaluation of efficacy of addition of dexmedetomidine /clonidine to fentanyl in attenuation of pressor response of laryngoscopy and intubation: A prospective double blind randomized controlled trial

Background: Laryngoscopy and intubation have been associated with increased sympathetic responses such as hypertension, tachycardia, arrhythmias, and myocardial infarction. This response is usually transient and variable but might be life threatening in cardiovascular and cerebrovascular compromised patients. So controlling this response is utmost goal of anaesthesia. We evaluated the effectiveness of dexemedetomidine/clonidine to attenuate pressor response.

Aims: Evaluation of efficacy of addition of Dexemedetomidine/ clonidine to fentanyl in attenuation of pressor response of laryngoscopy and intubation.

Results: There was significant fall in mean HR and mean MAP after 10 min of study drug infusion. Clonidine and dexemedetomidine groups had significantly less rise in heart rate and mean arterial pressure after intubation and then at 1,2,3,4,5 and 10 min time intervals compared to placebo group. No significant side effects were observed.

First description of intubation was given by Rowbatham and Magill in 1921. Reid and Brace in 19401 and king et al. in 19512 demonstrated the circulatory responses to laryngeal and tracheal stimulation following laryngoscopy and intubation.

Various haemodynamic changes like hypertension, tachycardia, arrhythmias, myocardial ischemia or infarction have been associated with laryngoscopy and intubation. These changes are usually transient and variable and well tolerated in healthy individuals but can be fatal in patients having hypertension, coronary artery diseases and cerebrovascular diseases. These high risk patients may develop left ventricular failure, myocardial ischemia, cerebral haemorrhage and convulsions may be precipitated in pre-eclamptic patients.

So attenuating this response is utmost goal of safe general anaesthesia. Various methods and drugs have been practiced to blunt these pressor responses like deepening of anaesthesia, use of topical anaesthesia and laryngeal mask airway (LMA), use of opioids, calcium channel blockers, beta blockers,alpha-2 agonist before intubation.3, 4, 5, 6, 7, 8, 9, 10 Presently alpha-2 agonist like clonidine and dexemedetomidine had shown their efficacy to attenuate this response effectively by decreasing the sympathoadrenal stimulation.

With this background we planned the present study to evaluate the efficacy of addition of dexemedetomidine/clonidine to fentanyl in attenuation of pressor response caused by laryngoscopy and intubation during various surgeries under general anaesthesia (GA).

After taking approval from local institutional ethical committee, this prospective randomized double-blind controlled trial was carried out in Department of Anaesthesiology at RNT Medical College and associated group of hospitals, Udaipur (Raj.). Informed written consent was taken from all patients. Patients having age between 15 to 65 years of both sexes, ASA grade I and II, scheduled for elective surgeries under GA were included in the study. Patients having baseline heart rate< 60/min and blood pressure < 100/50 mm of Hg, reactive airway disease and history of cardiac and hypertensive disease were excluded from the study as well as patients requiring two or more attempts for laryngoscopy and intubation were also excluded from the study.

Sample size- Sample size was calculated on the basis of previous study by Mondal S et al.11 A minimum sample size of 96 was calculated with confidence interval of 95% and probability of having any error in selecting the sample was 10%.

All the patients were randomly divided into three groups having 32 patients in each group. Randomization was done with computer chit method.

All the patients were thoroughly evaluated in pre-operative check up.

All the patients were induced with Inj. Thiopentone (5 mg/kg) I.V. and after giving Inj. Succinylcholine (2mg/kg) I.V, laryngoscopy was done and patients were intubated with appropriate sized endotracheal tube. Patients who had coughed or bucked during procedure were excluded from study.

After completion of surgery, residual neuromuscular blockade was reversed with Inj. Neostigmine (0.05mg/kg) and Inj. Glycopyrrolate (0.01mg/kg) I.V. After extubation all patients were assessed for sedation using Ramsay sedation score12 (1- Anxious or restless or both, 2- Cooperative, orientated and tranquil, 3- Responding to commands,4- Brisk response to stimulus, 5- Sluggish response to stimulus, 6- No response to stimulus).

After assuring full recovery, patients were shifted to post anaesthesia care unit (PACU) and monitored for vitals at every 30 minutes up to two hours.

Any adverse events like hypotension, bradycardia, arrhythmias and bronchospasm occurred intraoperatively or postoperatively were recorded.

All the patients were comparable demographically among three groups regarding mean age, sex and mean body weight. (Table 1)

Distribution of patients according to demography

Distribution of patients according to HR among the groups (NS, DE, CL) 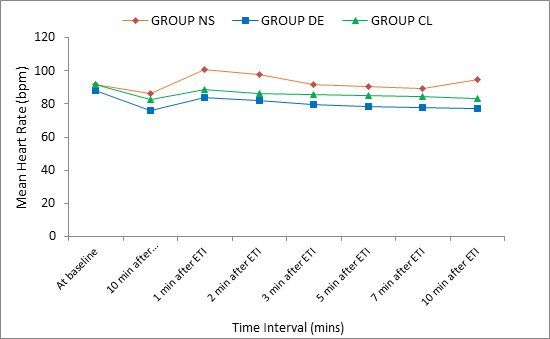 Changes in mean MAP among three groups at various interval 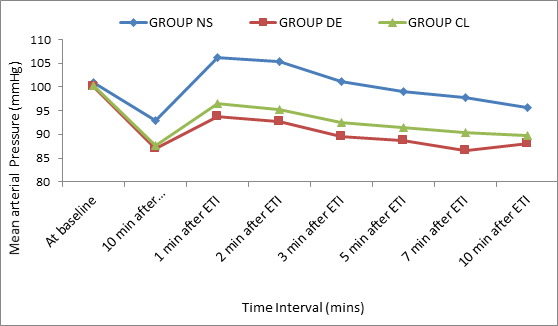 The pressor response to laryngoscopy and endotracheal intubation may be potentially life threatening, if remained unrecognised or left untreated. These changes are the maximum at 1 min after intubation and last for 5-10 min and well tolerated by patients in the absence of cardiovascular co morbidity and deranged intracranial pressure homeostasis.13 Attenuation of this post intubation pressor response is an utmost goal for modern anaesthesia.

Alpha-2 agonists like clonidine and dexemedetomidine have proved their efficacy to attenuate this response by central sympatholytic action. They also offer a unique pharmacological profile with sedation, analgesia, cardiovascular stability and with advantage to avoid respiratory depression.14, 15, 16, 17

Similar to our study, Bajwa SJS et al.18 found that laryngoscopy and intubation was associated with a significant rise of mean HR in fentanyl Group as compared with dexemedetomidine group (p<0.001). Mean HR after 1, 3 and 5 min of intubation again returned to lower values, but on comparison of rate of decrease and stabilization of haemodynamic parameters, it was highly significant in group dexemedetomidine (p<0.001).

Gandhi S et al.19 compared dexemedetomidine with fentanyl in attenuation of pressor response during laryngoscopy and intubation. They found that the mean MAP was significantly increased in both the groups after laryngoscopy and intubation (p<0.05). The peak increase in mean arterial blood pressure was seen just after intubation and cuff inflation (after 1&2 minute). The increase in MAP was less in group dexemedetomidine as compared to group fentanyl and this difference was statistical highly significant (p<0.001).

SJS Bajwa et al.18 also found that laryngoscopy and intubation was associated with a significant rise of mean MAP in fentanyl group as compared with dexemedetomidine group (p<0.001). Mean MAP after 1, 3 and 5 min of intubation again returned to lower values but on comparison of rate of decrease and stabilization of haemodynamic parameters, it was highly significant in dexemedetomidine group (p<0.0001). These results also coincided with present study.

Our results also coincided with N. Turgut et al.20 They found that the laryngoscopy and intubation was associated with a significant rise of MAP in fentanyl group as compared with dexemedetomidine group (p<0.01). MAP values before and after extubation in Group fentanyl was significantly higher than in group dexemedetomidine.

Shridhar Kalakeri et al.21 also found that use of dexemedetomidine was associated with less rise of mean MAP after intubation and it was highly significant.

Similar to our study Bajwa et al.18 and Sridhar et al.21 found that patient’s developed bradycardia were well managed with either drug or fluid administration.