Carpenter, Soni, Goyal, and Godara: Comparison of hemodynamic effects of etomidate and propofol as an induction agent in patients with LVEF ≤ 40% undergoing elective coronary artery bypass grafting surgery – A prospective and randomized study

Aim: To compare the effects of Propofol and Etomidate on hemodynamics in terms of heart rate, rhythm, blood pressure, and central venous pressure.

Materials and Methods: 100 patients with LVEF≤40% scheduled for elective CABG, were randomly assigned to one of the two groups receiving either of the inducing agents, group A (PROPOFOL 2mg/kg) and group B (ETOMIDATE 0.2mg/kg).

Conclusion: Etomidate is superior to propofol in providing hemodynamic stability before and after laryngoscopy and intubation, but less effective in controlling the pressor response to intubation. Therefore, Etomidate can be used as an induction agent with suitable adjuvants to control pressor response to tracheal intubation in patients undergoing CABG with low LVEF.

Anaesthetic induction agents produces variable degree of hypotension while laryngoscopy and endotracheal intubation produces hypertension and tachycardia. These changes in hemodynamics may alter the balance between myocardial oxygen supply and demand which can be detrimental in this high risk group of patients undergoing CABG.4, 5, 6

Various anaesthetic agents like Thiopentone, propofol, midazolam and Etomidate are in current use as an induction agents but no single anaesthetic agent is suitable for all patients as all of these agents have their advantages and disadvantages.

Propofol,7, 8, 9 an alkylphenol derivative, provides rapid onset and short duration of action. It causes considerable reduction in systemic vascular resistance and arterial pressure 15% to 40% after iv induction with 2mg/kg. Its effect on HR is variable. It causes direct myocardial depression at doses above 0.75mg/kg.

Etomidate3, 7, 10 is a carboxylated imidazole derivative, has a rapid onset (10-60 sec), a brief duration of action (3-5 min), and hydrolyses primarily in liver. It provides hemodynamic stability in both noncardiac and cardiac disease patients after dosage of 0.15 to 0.30 mg/kg. It directly inhibits 11-beta hydroxylation, which results in temporary reduction in biosynthesis of cortisol and aldosterone.11, 12, 13, 14 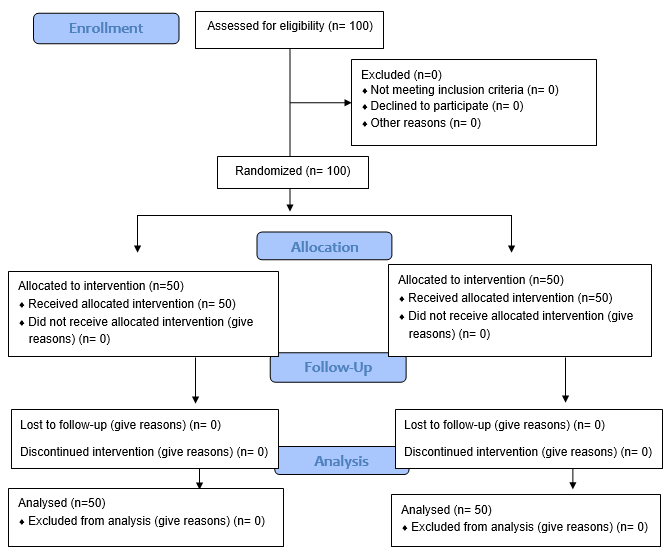 The study was conducted after prior approval of Institutional Ethical Committee (IEC).

Randomization - randomization was done using computer generated random numbers and blinding was done by sealed envelope method. This study was conducted on 100 patients which were randomly allocated into two groups, 50 in each group

After approval from IEC and written informed consent, patient was taken in operation theatre. Initial monitoring inside the theatre included five lead ECG, non-invasive blood pressure, and pulse oximetery were applied. Under local anaesthesia 16G arterial line and 7Fr central venous line were placed in the right femoral artery and the right internal jugular vein, respectively. Patients were preloaded with ringer lactate solution 5ml/kg and thereafter intravenous fentanyl 2 mcg/Kg and midazolam 0.04mg/kg were administered over a period of one minute to all patients. After a period of five minutes, the baseline data in the form of heart rate, systolic, diastolic, mean systemic arterial pressures and CVP were recorded during the study period in all the patients. Subsequently, general anaesthesia was induced with one of the agents, depending on the group. The induction agent was administered slowly over a period of 60 seconds. Thereafter, an additional dose of Fentanyl 2mcg/kg and Vecuronium bromide 0.1 mg/Kg were administered to facilitate tracheal intubation, which was done three minutes after the end of induction.

The patients were ventilated by mask and ventilator with tidal volume 8ml/kg till intubation as manual ventilation might lead to development of PEEP which might cause the changes in hemodynamics. Hemodynamic data were recorded at baseline and post induction 1 min.(T1), 3 min.(T2) and post intubation 1min.(T3), 3min.(T4), 5min.(T5) and 10 min.(T6) Throughout that period the lungs were mechanically ventilated with 100% oxygen, to maintain an end-tidal carbon dioxide between 30 and 35 mmHg.

Primary objective was to evaluate and compare the effects of Propofol and Etomidate on hemodynamics in terms of heart rate, rhythm, mean blood pressure, and central venous pressure.

Patient characteristics across the groups (Table 1 and Table 2) 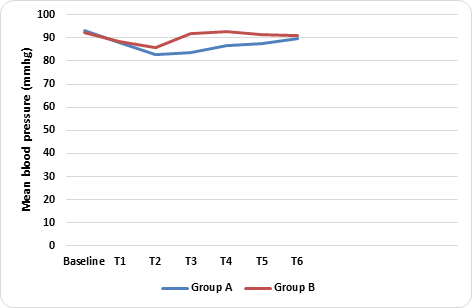 Comparison of secondary outcome in Group A and Group B 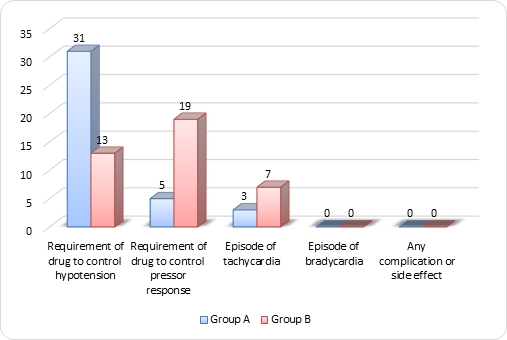 Propofol and Etomidate are two commonly used intravenous induction agents. Hypotension is common with propofol induction due to vasodilatation caused by reduction in sympathetic activity, direct effect on intracellular calcium mobilization and inhibition of prostaglandin synthesis in endothelial cells.15 Etomidate does not cause this hypotension. Hemodynamic stability seen with etomidate may be partially due to lack of effect on the sympathetic nervous system and on baroreceptor function.

HR slightly decreased post induction in both the groups and this fall was greater in propofol group but comparison is statistically insignificant. Kamath MN et al.16 also concluded that fall in HR was more in propofol group. The observation was similar to our study. However, this observation is consistent with most of the studies comparing etomidate and propofol in cardiac as well as non cardiac surgery settings irrespective of cardiac function.

HR increased post intubation in both the groups but the rise was greater in etomidate group and comparison was statistically significant at 2 min post intubation. (p = 0.045) Thereafter HR returned slowly around baseline at post intubation 15min in both the groups. This observation was consistent with Singh et al.14 which shows etomidate group was the least effective of all the groups in minimizing stress response, with statistically significant increase from baseline in both heart rate (P = 0.001) and mean arterial pressure (P = 0.001) at 1 minute after intubation. However, this observation was contrary to Young et al.17 which shows no group differences in SBP, DBP, and HR following intravenous anesthetic drug injection and endotracheal intubation. Probably the reason behind this is the dose of etomidate (0.3 mg/kg) used in the study which is relatively higher than dose (0.2 mg/kg) used in our study.

SBP, DBP and MAP decreased from post induction 1 min. to post induction 3 min. in both the groups but fall in BP was slightly higher in propofol and comparison of these data were statistically insignificant. This fall in hemodynamics is attributable to study drugs and other drugs used in anaesthesia technique as well as positive pressure ventilation during induction of general anaesthesia. SBP, DBP and MAP increased from post intubation1 min. to post intubation 5 min. in both the groups but rise being higher in etomidate and statistically significant as compared to propofol, this could be due to stress response to laryngoscopy and endotracheal intubation. Thereafter SBP, DBP and MAP returned slowly around baseline at post intubation 15 min.in both the groups. These observations are consistent with Kaushal RP et al.,11 Kamath MN et al.,16 Sivanna S et al.,18 and Shukla N et al.19 The observations of Singh R et al.14 are dissimilar to the present study as they concluded that both anesthetic agents were acceptable for induction in patients with coronary artery disease and left ventricular dysfunction despite a 27-32% decrease in the mean arterial pressure and the outcome of anesthetic induction may depend on factors such as the speed of injection, route, dose and experience of the clinician, other than the property of the agent itself.

CVP was comparable between two groups at all time intervals. This observation is similar to most of the studies done in cardiac settings.

In our study, we observed that hypotensive episodes occurred more in propofol group and required drugs to control these episodes, and this comparison was statistically significant.(P=0.001). This observation was similar to Shah et al.20 study. Hemodynamic trend in the Afshin G B et al.21 study is similar to our study but the ephedrine prescription rate due to hypotension is 5% (2 patients) in etomidate. This rate is lower than rate observed in our study. Probably this may be due to more contribution to hypotension by higher dose of fentanyl in our study.

We observed that post intubation pressor response occurred more in etomidate group and required drug to control this response, and this comparison was statistically significant.(p=0.002) This observation is consistent with Singh R et al.14 and Shivanna S et al.18 study.

Etomidate causes adrenocortical suppression. Kaushal RP et al.11 and Pandey AK et al.12 found that etomidate can be safely used in these patients with better hemodynamic stability and without cortisol suppression lasting more than 24 hours. Whereas Cuthbertson BH et al.22 did a study to check steroid suppression in critically ill patient. They found that use of bolus dose etomidate is associated with an increased incidence of inadequate response to corticotropin, but is also likely to be associated with an increase in mortality.

RG Merin Is anaesthesia beneficial for the ischemic heart?Anesthesiology19805343940