Background: Tizanidine is an α 2 receptor agonist derived from clonidine with primary central myotonolytic action along with antinociceptive and anticonvulsant action. Unlike clonidine, there are few studies evaluating the role of tizanidine as an effective anaesthetic premedication. Hence this study was undertaken to evaluate oral tizanidine [2 mg and 4 mg] administered preoperatively in decreasing the intraoperative consumption of isoflurane.

α 2 adrenergic agonists are popular drugs in current anaesthesia practice as sedatives and anxiolytics. They act on the presynaptic α2 receptors inhibiting norepinephrine release from the presynaptic neuron. They act centrally at the locus ceruleus causing sedation. They also have a role in analgesia by centrally mediated pain modification via dorsal horn. Clonidine is a popular α2 agonist and widely used as an anaesthetic adjunct to decrease anaesthetic requirement and also decrease the stress response associated with laryngoscopy, intubation and surgery itself. But the side effects with clonidine use include decrease in heart rate, blood pressure and rebound hypertension with sudden withdrawal.1, 2

Tizanidine, an imidazoline, is also an α 2 receptor agonist derived from clonidine which primarily has centrally acting myotonolytic action along with antinociceptive and anticonvulsant action with an advantage of shorter duration of action and less action on the heart rate and blood pressure.3 Tizanidine is rapidly absorbed after oral administration and attains maximum plasma concentration by 0.75 to 2 hours. It has an elimination half life of 2.1 to 4.2 hours and hence may be appropriate even in daycare surgeries.4, 5, 6, 7 Although there are many studies evaluating the role of clonidine in decreasing anaesthetic requirement,1, 2 there are few studies evaluating the role of tizanidine as an effective anaesthetic premedication. While using entropy to monitor depth of anaesthesia, we planned to precisely titrate isoflurane administration and measure its consumption. We undertook this study to evaluate 2 different doses of oral tizanidine [2 mg and 4 mg] premedication in decreasing the intraoperative consumption of isoflurane.

This prospective, randomised, double-blind control trial was undertaken between August 2018 and February 2019 after obtaining institutional ethical committee clearence [BMCRI/PS/66/2018-19 dated 23.6.2018] and registration with ctri.nic.in [CTRI/2018/021217]. 75 patients of American Society of Anaesthsiologists grades I and II, of either sex, aged between 18 to 60 years, scheduled for elective laparoscopic surgeries under general anaesthesia and giving informed consent were enrolled for the study. Patients with uncontrolled diabetes or hypertension, cardiorespiratory, renal, endocrine, hepatic disorders, neurological and psychiatric disturbances, history of exposure to α 2 adrenergic agonists in the past 2 weeks were excluded from the study. The recruited patients were allocated randomly into 3 groups using computer generate randomisation sequence [www.random.org]. Group A patients received 2mg oral tizanidine, Group B patients received 4mg oral tizanidine and Group C patients received sugar pellet. Sequentially numbered opaque envelopes were used to enclose the study drug as per the randomisation sequence generated. After preanesthetic examination, overnight fasting of 8 hours was advised and premedicated with oral 150 mg ranitidine and 0.25mg alprazolam. Patients were shifted to the preoperative room on the morning of surgery and connected to routine monitors and basal heart rate (HR), oxygen saturation (SpO2), noninvasive blood pressure (NIBP) were recorded. The sealed study drug was administered 90 minutes preoperatively with sips of water by senior anaesthesiologist not further involved in the study. Recording of vital parameters and sedation using Ramsay sedation scale (RSS) was done every 15 minutes till patient was taken up for surgery. Preloading with Ringer lactate 10ml/kg body weight was done. Occurrence of any side effects like headache, giddiness, diplopia, nausea, vomiting was noted.

Vital parameters were recorded after induction, after intubation, then every 5 minutes till end of surgery. Initial fresh gas was kept at 4L/min till a MAC of 1 or RE/SE between 40-60 was achieved and then the flows were reduced to 2L/min. Isoflurane concentration was adjusted to maintain SE between 40-60. End tidal isoflurane, end tidal O2 and end tidal CO2 was also be recorded every 5 minutes. Isoflurane consumption was recorded every 30 minutes till end of surgery. Rescue fentanyl (0.5µgm/kg) was administered if SE persisted >60 despite achieving MAC of 1.5. Rescue fentanyl (0.5µgm/kg) was also administered when hypertension (rise in MAP above 20% of baseline) or tachycardia (HR>100bpm) persisted inspite of SE <60 and such rescue doses were noted. Inj vecuronium intermittent boluses were administered to maintain a TOF count <2.

At the end of surgery, isoflurane was cut off and neuromuscular block reversed with IV neostigmine 0.05 mg/kg and IV glycopyrolate 0.01mg/kg, extubated when the TOF ratio was 0.9 and shifted to postoperative room. Recording of vital parameters was continued in the postoperative period for every 15 minutes for half an hour, then every 30 minutes for 2 hours, then every hour for 6 hours. Any side effects like headache, giddiness, diplopia, nausea vomiting were also noted.

A pilot study was initially conducted involving 10 patients who underwent laparoscopic surgeries, where the mean (standard deviation [SD]) consumption of isoflurane at 30 minutes of anaesthesia time was 8.6ml (1.4ml). To detect atleast a difference of 15% (effect size 1.29ml) in isoflurane consumption, assuming SD of 1.5ml and equal variance, while maintaining power at 80%, alpha error of 5%, we found that a sample size of 20 patients would be required in each group using www.openepi.com. We included 25 patients in each of the 3 groups to compensate for drop-outs.

Data was entered into Microsoft excel data sheet (Microsoft Inc., USA) and was analyzed using SPSS 22 version software (IBM SPSS Statistics, Somers NY, USA). Chi-square test was used as test of significance for qualitative data. Continuous data was represented as mean (SD). One – Way ANOVA (Analysis of variance) was used as test of significance to identify the mean difference between more than two groups of quantitative variables. Post Hoc Bonferroni test was used for intergroup analysis. p value (Probability that the result is true) of <0.05 was considered as statistically significant after assuming all the rules of statistical tests.

Total of 75 subjects were included in the study, 25 in each group. However 10 subjects were excluded from the study (Figure 1) due to violation of study protocol (4), intraoperative conversion of laparoscopic to open surgery (3) and prolonged duration of surgery of more than 2 hours (3). Demographic data, mean anesthetic exposure time and mean surgery time was comparable between the 3 groups as shown in Table 1. Surgeries done included laparoscopic appendicectomy, laparoscopic cholecystectomy and laparoscopic hernia mesh repair surgeries.

Heart rate was lower in the preoperative, intraoperative (after induction, after intubation, 5,10,15 min immediately post extubation) and postoperative period in the tizanidine groups (Figure 3). All groups had an increase in heart rate after intubation which subsided within 5 minutes of intubation. Mean arterial blood pressure was comparable between the 3 groups at all time intervals as shown in Figure 4. 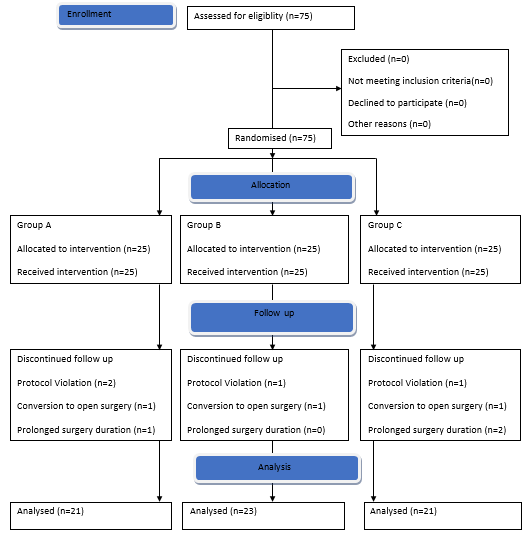 Comparision of perioperative heart rate variation among the three groups

Tizanidine was introduced in the 1980s as a centrally acting skeletal muscle relaxant and became popular in the treatment of spasticity associated with multiple schlerosis, spinal cord injury and cerebrovascular diseases for which it is even currently in use in adult and paediatric population.8, 9, 10, 11, 12 In many subsequent studies of tizanidine that followed on animal models, it was found to possess antinociceptive properties with antagonism by α adrenergic receptor antagonists.13, 14 Hence was investigated in mainstream anaesthesia studies along with other α 2 adrenergic agonists like clonidine and dexmedetomidine. Sedation and hypnotic action being predominant in this class of drugs,15 prompted researchers to use tizanidine as an anaesthetic premedication in the aim of reducing the dose of other intraoperatively used anaesthetic agents.

Takenaka et al.16 found that tizanidine 4mg reduced the midazolam dose of induction. Tabari and workers.17 observed significantly lower propofol dose for anaesthesia maintainence with 4mg tizanidine premedication. With inhalational anaesthetics, Wajima et al5 found that 4 mg tizanidine premedication reduced the MAC of sevoflurane by 18% in adults. MAC / minimum alveolar concentration is the anaesthetic end tidal concentration at which 50% subjects move in response to skin incision.18 Hence a reduced MAC implied a decreased requirement of the inhalational anaesthetic. We found similar results with tizanidine groups consuming significantly less isoflurane. In our study, entropy guided manual titrating of isoflurane administration was done. Response entropy was selected to guide isoflurane administration as it ensures adequate depth of anaesthesia with reflex suppression and also an early indicator of emergence from anaesthesia. 19, 20 Also electroencephalogram derived monitoring like entropy to assess depth of anaesthesia was found to be associated with more accurate anaesthetic drug administration and its reduced consumption.21 The end tidal isoflurane concentration was also significantly less at 30min, 60min, 90 minutes of intraoperative period for both tizanidine 2mg and 4mg. This action is found to be consistent with other α adrenergic agonists like clonidine22, 23 and dexmedetomidine.24 This is beneficial in cost savings, decreased operation theatre air pollution and minimising the adverse effects of inhalational anaesthetics.18

The sedative effect of Tizanidine was pronounced in our study with preoperative and postoperative sedation scores showing significantly higher scores as compared to the control group. Similar effects were observed by Wajima and coworkers5 with 4mg Tizanidine and they also observed a faster time to loss of consciousness with tizanidine owing to its sedative and hypnotic action. However, we did not record the time of induction and is one of the drawbacks of our study. This sedative action is typical of α adrenergic agonists. Miettinen et al.6 observed modest sedative action with Tizanidine 4, 8, 12 mg and 12 mg oral Tizanidine producing action similar to 150 µg of clonidine.

Researchers had observed higher fall in systolic and diastolic pressures with oral tizanidine 12 mg and 8 mg as compared to 4mg.6 Hence, we restricted our study to tizanidine 2mg and 4mg. We intend to uptake further studies with higher doses with 4 mg tizanidine showing positive results. Pharmacokinetic studies showed the peak action of tizanidine at 90 minutes of ingestion.4, 5, 6, 7 Hence after 90 minutes of preoperative administration of test drug the patient was induced.

Miettinen and workers6 observed sympatholytic effects with significant fall in systolic blood pressure at 90 minutes and diastolic blood pressure fall 2 hours of tizanidine 8 mg and 12 mg administration. However we observed comparable mean blood pressure between control and tizanidine 2mg and 4 mg at all time intervals which may be explained by the lower dose of tizanidine in our study. We did observe lower heart rate in tizanidine patients at multiple time intervals of preoperative, intraoperative and postoperative period. Similar observations were seen by Tabari et al.17 with lower baseline variations of heart rate with tizanidine premedication group compared with placebo group. As compared with other alpha 2 agonists,1, 2, 15, 25 we did not observe episodes of severe bradycardia, hypotension, AV block, rebound hypertension requiring pharmacological correction which suggests tizanidine to be associated with stable haemodynamics.

We also did not observe any significant side effects as seen with other alpha 2 agonists like decreased salivation,6 delirium.25 It may be because we only administered single, low dose of tizanidine. Further studies with higher doses of tizanidine need to be evaluated and compared with clonidine.

Apart from time to induction, time to extubation, quality of sleep was also not recorded which constitute other drawbacks of our study. Although we can safely conclude that Tizanidine 2 mg and 4mg are promising oral preanaesthetic medications which decrease inhalational anaesthetic requirement with tizanidine 4 mg having more potent action. At the same time they are devoid of major side effects and maintain hemodynamic stability.

HM El Kerdawy EE Zalingen JG Bovill The influence of alpha 2-adrenoceptor agonist , clonidine, on the EEG and on the MAC of isofluraneEur J Anaesthesiol200017210510