Surana and Baxi: Comparison of intra-articular injection of local anaesthetic Ropivacaine versus Ropivacaine+Ketorolac and Ropivacaine+Tramadol for post-operative pain relief in knee and hip arthroplasty surgeries under spinal anaesthesia

Context: Local anaesthetic infiltration in knee and hip arthroplasty is employed as a part of multi-model analgesia to reduce opiate consumption and help in early ambulation of elderly people It reduces post-operative pain effectively and thus reduces complications like Deep vein thrombosis, pulmonary embolism, pneumonia and even myocardial infection. Addition of ketorolac or Tramadol further prolongs the duration of analgesia.

The last decade has seen growing use of enhanced recovery pathways (also known as “fast track” recovery and rehabilitation). Post-operative pain relief has shown both improved patient care and reduced length of hospital stay and thus has huge implications in terms of health care savings. Pt for total knee and hip surgery are usually elderly, with other associated co-morbidities and require early ambulation in order to reduce the complications like bed-sores, deep vein thrombosis, thrombo-embolism, respiratory complications like pneumonia and M.I. There has been a shift towards the use of regional anaesthesia over general anaesthesia in knee and hip surgeries.1, 2, 3, 4

In order to optimize pain control in early post-operative period several adjuncts have been tried, these includes continuous epidural anaesthesia, peripheral nerve block and local anaesthetic infiltration in the joint (intra-articular and pari-articular space). Local anaesthetic infiltration in the joint is a safe and easy technique without much expertise and complications as compared to other techniques like continuous-epidural block, peripheral nerve block or systemic opioid administration which all require either expertise or are full of complications. Based on the principle of blocking the pain signal at the site of nociceptive stimulus.5

Most studies use a multimodal approach using either Bupivacaine or Bupiv plus analgesic or opioids. In our study we used Ropivacaine which is a long acting local anaesthetic agent with less Cardiac and C.N.S toxicity as compared to Bupiv and adding analgesic and anti-inflammatory agents (Ketorolac &/or Tramadol) further increases the duration of block.

Tramadol- An opium related pain reliever, 10 times less potent than Morphine and acts by binding to u–opioid receptors. Also, a serotonin-norepinephrine re-uptake inhibitor causes less respiratory depression and other side effect as compared to Morphine.

This study was conducted after obtaining institutional ethical committee approval, as randomized double-blind controlled study. An informed written consent was obtained from all the patients. Sixty patients of ASA Group I, II and III (as our patients are elderly and HT and DM are common finding) are included in the study. Patients with uncontrolled HT, DM, those with h/o MI, Bronchial Asthma, Anaphylaxis to L.A, Anemia, and body weight above 100 kg were excluded from the study. Also, patients who were unable to understand VAS score were excluded from the study.

Patients were randomized into three Groups (n=20 each), according to computer generated random numbers and kept in separate sealed envelopes.

An Anaesthetist not involved in the conduct of anaesthesia and post-operative management prepared the study drugs and handed over to the surgeon for Intra and Peri articular injection at the time of closure of the wound. A blind observer assessed the patients for post-operative pain relief up to24 hours after surgery.

After shifting the patient in O.T, monitoring of HR, NIBP, SPO2, and ECG started. These parameters were recorded thorough out the surgery. All patients were pre-loaded with 500 ml of RL and then given SAB in sitting position. Only 2 patients were given combined spinal epidural block (catheter placement) as surgeon planned for bilateral surgery. A27 G Quincke’s needle was introduced in L2-L3 /L3-L4 vertebral space after painting and draping and with all aseptic precautions. A dose of 0.5% Bupivacaine heavy 3 to 3.5 ml was given. All patients were given Inj. Mephentermine 6mg in drip in order to prevent hypotension, with additional doses of 6mg given as bolus if patient had BP<90mmof HG. Patients who had incomplete blockade (not up to T6 level) or where surgery was prolonged and hence converted to GA, were excluded from the study.

The quality of pain relief was assessed by Patients satisfaction score (PSS). All patients were observed for any untoward effect like N&V, Hypotension, Blood transfusion requirement etc. VAS and PSS were assessed as follows

We followed the study by L.O Anderson et al.” High volume infiltration analgesia “Acta Anaesthesiologica Scandinavica”, vol 52 no 10, pp1331-1335 2008 in which a sample size of 12 pts was used. This sample size was considered very small for a biomedical study. Based on the central limit theorem we decided to include 20 pts in each grp to study the difference of score of 2 in VAS with 95% confidence interval, power of 80% and an alpha error of 5%.

SPSS software (version 16 Chicago IL) has been used for statistical analysis. Data was presented as mean, SD, Median(range) or percentage as applicable. Analysis of variance (ANOVA) was used to find the significance between three groups for continuous variables and paired t-test was used for inter-group comparison. Categorical data were presented as numbers (proportion) and compared with Chi- Square test. ‘P’ value of < 0.05 % was considered statistically significant.

Total rescue analgesic given in 24hours (in mg) 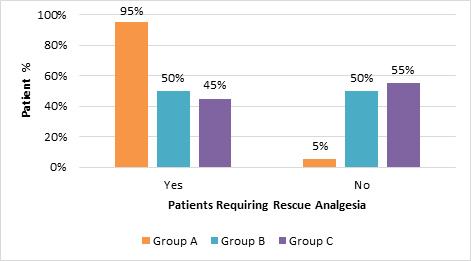 All three groups were comparable in respect to demographic data, (age, sex, weight) and pre-operative vitals HR, BP and Hb levels are all comparable in all the three Groups and are statistically insignificant (Table 1, P value>0.05).

The no of patients requiring rescue analgesic were 95 % in Group A, as compared to50% in Group B and 45% in Group C.

Several studies have been conducted using Inj. bupivacaine 0.5% for local infiltration,8, 9 single shot Vs continuous infiltration of L.A using catheter tech11, 12 using Inj. Ropivacaine alone11 and all has shown significant pain relief but none has compared Ropivacaine with Ropiv + Ketorolac and /or Tramadol as has been done in this study and has shown significant prolongation of pain free period and lesser doses of rescue analgesic drugs in 24hrs.

It is now almost established that local infiltration of wound by local anaesthetic is an established method of pain relief. It is safe, effective and without much expertise and with minimum risk of complications. It is based on the mechanism of pre-emptive analgesia as it blocks the nociceptive pain impulses at its very point of origin and before pain establishes. Addition of adjuvants like Opioids, NSAIDS, or alpha-adrenergic blockers like Daxmetomidine further prolongs the analgesic effect without much complications.

Our study has certain draw backs as patients were initially given spinal anaesthesia and time taken to finish the surgery was not taken into consideration. Also, different patients have different pain perception hence initial low pain score can be due to effect of spinal anaesthesia. Further different surgeons gave local infiltration hence some variation could be there which has not been taken into consideration. With infiltration of 50 ml of L.A, there are chances of infection and may require proper aseptic precautions.