Background and Aims: Transversus abdominis plane block is facial plane block providing post-operative analgesia after lower abdominal surgeries as part of multi-modal analgesia. We evaluated analgesic efficacy of TAP block with Bupivacaine for 24hr after caesarean section done with pffannestiel incision under spinal anaesthesia, the pain being assessed with help of VAS.

Materials and Methods: Total 130 parturients (ASA I OR II) posted for elective caesarean section under spinal anaesthesia were enrolled. They were allocated randomly in to two groups of 65 each. Group B patients received bilateral TAP block under USG at the end of surgery with 15ml of 0.25%Bupivacaine on each side while Group C patients did not receive TAP block. IV paracetamol 1gm was given in both groups as baseline analgesic at the end of surgery. Post-operative pain was assessed with VAS and rescue analgesia was given in form of Inj. Diclofenac Sodium Aq. at VAS score>4. Total rescue analgesia required in mg in post-operative 24 hours was noted.

Conclusion: USG-guided TAP block is easy to perform and effective as a component of multimodal analgesic regimen after caesarean section without any major complications.

Caesarean delivery is a major surgical procedure after which substantial post-operative pain [moderate to severe] and discomfort can be anticipated and failure to treat it adequately may affect maternal-infant bonding, breast-feeding,1, 2 as well as may expose the mother to risk of thromboembolism3 as a result of immobility. The provision of effective post-operative analgesia is of key importance to facilitate early ambulation, infant care and prevention of post-operative morbidity.

TAP block when used as a part of multimodal analgesia relieves substantial somatic pain arises from skin incision. So, we hypothesise that TAP block will prolong the time to first dose of analgesic and also will reduces total analgesic requirement.

The study was conducted after approval by institutional Ethics Committee (EC Reg. No: ECR/ 85/Inst/GJ/2013/RR-16). The study was registered prospectively with the Clinical Trial Registry- India (Registration No.-CTRI/2019/03/018080). Informed and written consent from all subjected was taken before initiation of study procedures. This prospective, randomized, controlled trial was completed over period of 1yr (From December 2018 to December 2019) in which we included American Society of Anesthesiology (ASA) I and II patients posted for elective caesarean section under spinal anaesthesia having singleton full term pregnancy.

Patients were excluded from study if they refused, had contraindications to spinal anaesthesia, required general anaesthesia at any point of time during surgery, had infection, trauma, scar or sinuses at site of block.

All patients received spinal anaesthesia with 2ml of 0.5% hyperbaric Bupivacaine. At the end of surgery all patients was received 1gm paracetamol infusion. Patients were shifted to USG room if patient is hemodynamically stable.

USG-guided bilateral TAP block was given to Group B patients by in plane approach using the MINDRAY Ultrasonography machine with linear array transducer probe (8-14 MHz). Patients who were randomized to Group C were also prepared for block and scanned by USG, but no block was given. 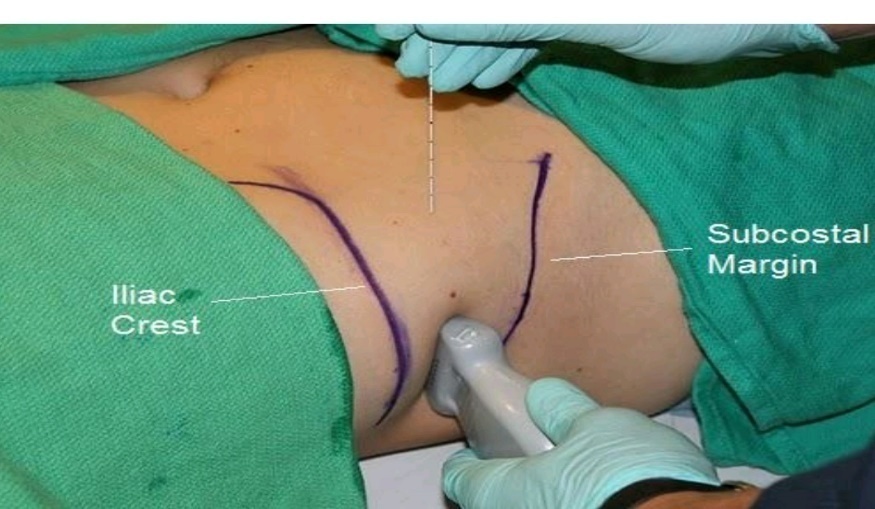 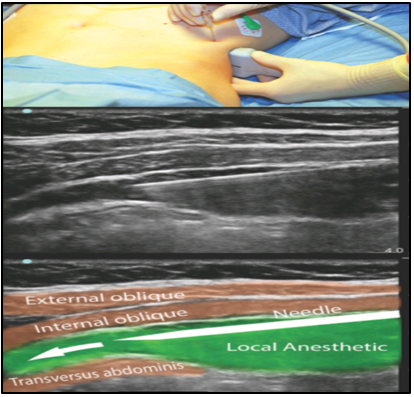 Pain severity was assessed by using VAS scale (0= no pain and 10= worst pain) which was explained at the time of taking consent and assessment done at 2, 4, 6, 8, 12, 18, 24hr after completion of procedure. Rescue analgesia was given to patients on demand or when VAS >4 in form of inj. Diclofenac Aq 75mg IV.

Time to first rescue analgesia, total diclofenac requirement in 24 hr and VAS parameters were compared in both groups up to 24 hrs.

Sample size has been calculated on basis of time to first rescue analgesic of previous study3 which shows time to rescue analgesia in study group 9.3hr as compared to controlled group 4.1hr. Using this parameter with 95% confidence interval and 80% power minimum 126 patients (63 in each group) would be required for our study.

Observed data to be presented in mean + SD. All quantitative data were analyzed by paired and unpaired student t test to find out difference in results between two groups. p˂0.05 was considered as significant.

We had recruited total 130 patients in our study 65 pts in each group for possible loss of patients. 65 patients were randomised to undergo TAP block with 0.25% Bupivacaine and remaining 65 with no block. Demographic data and vitals (pulse, blood pressure and saturation) were comparable in both groups.(Table 1) 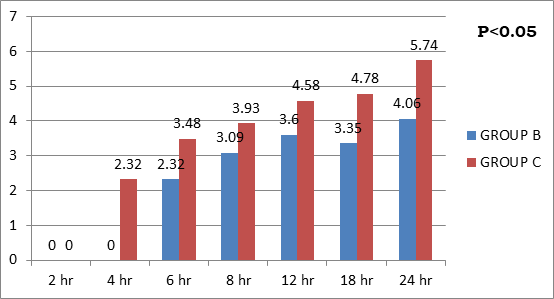 Moreover, at all time intervals except the 2nd hour, VAS score was significantly higher in group C as compared to group B. This insignificant difference in the 2nd hour was due to decreased VAS score in group C at this time as all patients in both group had been given the 1gm of paracetamol infusion at the end of surgery. 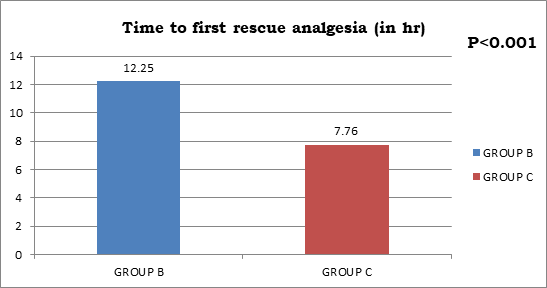 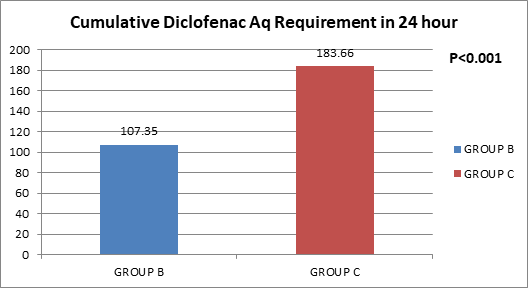 Number of doses of rescue analgesia in 24 hours

We did not find any perioperative complication like bradycardia, hypotension, tachycardia, local anaesthetic toxicity, and transient femoral palsy. We did not cross the toxic dose of local anaesthetic agent so we had not found any complications related to systemic toxicity. We did not observe any serious complications like accidental intra peritoneal and intra vascular injection as we carried out study under USG guidance and transeversus abdominis plane has less vascularity.

Pain has a wide spectrum of effect on the body and inadequtely controlled post-operative pain may have harmful physiologic and psycologic consequences which may increase morbidity. opioid anaesthetic agents in high doses are associated with side effects including dizziness, nausea, vomitting, constipation and respiratory depression.9

Multimodal analgesia techniques, including regional analgesic techniques have become standard practice.10, 11 The choice of analgesic combinations should depend not only on their analgesic efficacy but also on the side effect profile of these combinations. Thus, even if a certain analgesic regimen provides superior pain relief, it may not clinically beneficial if it is also associated with more adverse events.

After the pioneer work done by Rafi in 200112 McDonnel et al.13 suggested that TAP block is novel and reliable approach to the blockage of neural afferent to the anterior abdominal wall which provides post operative analgesia after abdominal surgeries. Thereafter, P. Hebberd et al. in 200714 described the ultrasound (USG)- guided approach to the TAP block.

USG guided TAP block is a new technique of refined abdominal field block used to provide analgesia after abdominal surgery. Caesarean delivery is a major surgical procedure after which substantial post-operative pain [moderate to severe] and discomfort can be anticipated which may affect breast-feeding, maternal-infant bonding, as well as may expose the mother to risk of thromboembolism3 as a result of immobility. The provision of effective post-operative analgesia is of key importance to facilitate early ambulation, infant care and prevention of post-operative morbidity.

Pain of caesarean section primarily experienced due to abdominal incision2 which is supplied by somatic nerves while visceral pain is experienced due to uterine incision. Among the pharmacological method- drugs which are used to relieve post caesarean pain has limitations. Systemic or neuraxial opioid are effective for treating post-operative pain, but associated with number of side effects(7) like nausea, vomiting, pruritus, constipation, and respiratory depression.9 Nonsteroidal anti-inflammatory drug having less side effect but alone may be insufficient to treat post caesarean pain. Currently multimodal analgesia technique involving abdominal field block with parenteral analgesia are becoming popular for these patients.6, 10

Epidural analgesia is a good alternative for postoperative pain relief. But, There are certain drawbacks:

Local anaesthetic infiltration provide pain relief only for short duration. So, it is not effective for prolonged analgesia.10, 11, 15

We used the USG- guided technique to avoid complication more common with the blind approach. In addition, it gives a real time visualization of needle tip and relevant anatomical structures, increasing the margin of safety and reducing the chances of failure.

Maitreyi Gajanan Mankikar et al. 2016 presented their study using sixty parturients undergoing caesarean section under spinal anaesthesia were randomized to undergo TAP block with ropivacaine (n= 30) versus control group (n=30) with normal saline. Patients of both group were given intravenous paracetamol as a standard analgesia and intravenous tramadol as a rescue analgesia. At the end of surgery, ultrasound guided TAP plane block was given bilaterally using Ropivacaine or normal saline (15 ml on each side). Each patient was assessed post-operatively up to 24 hr for VAS and rescue analgesic requirement. Maitreyi Gajanan Mankikar et al 2016, obsereved that reduction in VAS score after TAP block with 0.5% ropivacaine for 8-10 hr post- operatively as compared to patients receiving placebo block, mean time for rescue analgesia was 9.53hr after TAP block with 0.5% Ropivacaine and 4.1 hr in placebo block and mean tramadol requirement 140mg after TAP block with 0.5% Ropivacainein first 24 hr and 246.66mg in placebo block.

Uma Shrivastava et al 2015 presented their study using 62 parturients undergoing caesarean section were randomized in 2 groups. Group B received bilateral TAP block at the end of surgery with 20 ml of 0.25% Bupivacaine and no TAP block for group c. They used 75 mg Diclofenac 8 hourly and intravenous patient controlled analgesia (PCA) Tramadol as a standard analgesic. Each patient was assessed at regular interval after surgery using numeric pain rating scale for assessment of pain. Uma Srivastava et al 2015, observed that mean time of 1st analgesia was 12hr in group B and 6.5hr in group C. Tramadol consumption was significantly higher in group c than group b.

In our study, we used Inj. Bupivacaine 0.25% as Bupivacaine has a long duration of action and low tissue toxicity. At this concentration, sensory effects are seen predominate. The volume used in our study was 30 ml (15ml on each side). We used Inj. Paracetamol 1gm iv. in both groups as standard analgesic. So, at the end of caeserean section, patients in group B received Paracetamol and then TAP block as analgesics whereas patients in group C received only Paracetamol as analgesic.

The ethical legitimacy of using interventional placebo controls in regional anaesthesia has been questioned. McGuirk et al.16 16 graded the risks of placebo interventions used in 59 randomised trials of local anaesthetic blocks using their novel ‘SHAM’ (Serious Harm and Morbidity) scale [in which grade 0= no risk (no intervention); grade 1= minimal risk (skin allergy to dressing); grade 2= minor risk (subcutaneous haematoma, infection); grade 3= moderate risk (neuropraxia); and grade 4= major risk (blindness, pneumothorax, liver laceration)]. They found that more than half of the randomised study designs subjected patients in control groups to serious risks or irreversible harm. We did not incorporate an invasive placebo arm into our trial methodology because injecting saline through a needle may cause harm simply by the mechanics of the injection itself, such as pressurisation within a nerve fascicle, with potential for axonal ischaemia and nerve injury.17

We did not observe any serious complications like accidental intra peritoneal and intra vascular injection as we carried out study under USG guidance and transeversus abdominis plane has less vascularity.

Our study proves that USG- guided TAP block as a component of multimodal analgesia after caeserean section was effective in providing analgesia (delayed time for 1st rescue analgesia) with reduction in total analgesic requirement in 1st 24 hr.

There are no conflicts of interest.

AN Rafi Abdominal field block: a new approach via the lumbar triangle”Anaesthesia2001561010246