Background: Currently most of the anesthetist prefer the usage of multimodal analgesia technique to improve the degree of pain relief without inducing any side effects. Pregabalin and gabapentin when given in higher doses reduces the preoperative anxiety and induce sedation without causing undesirable side effects.

Aim: To compare and evaluate the effects of premedication drugs Pregabalin or Gabapentin versus placebo for attenuation of postoperative pain among patients undergoing laparoscopic cholecystectomy under general anaesthesia.

Conclusion: Pregabalin can be effectively used as a part of the multimodal analgesic to prevent acute postoperative pain among patients undergoing elective laproscopic cholecystectomy.

The use of laparoscopy for Cholecystectomy surgery has become a common practice because of its better patient satisfaction and faster recovery time. Opioids were still being considered as conventional drugs for post-operative analgesia, however its use leads to longer duration of ICU stay, negating the advantages of laparoscopic surgeries.1 Hence using an alternative analgesic in the place of opiods can facilitate faster post-operative recovery.

Currently most of the anesthetist prefer the usage of multimodal analgesia technique, like using NSAID’s, paracetamol, gabapentinoids, local anesthetic drugs, clonidine and dexmedetomidine either alone or in combination which acts via different mechanisms to improve the degree of pain relief without inducing any side effects.2 Recently, there is growing interest in use of Pregabalin and Gabapentin because of their novel target site of action.3, 4 As the advances progress using pregabalin and gabapentin in acute postoperative pain has been studied and the results were favourable as both these drugs have been found to reduce the opioid requirement in the post-operative period.5 Pregabalin and gabapentin when given in higher doses reduces the preoperative anxiety and induce sedation without causing undesirable side effects.5 Gabapentin exerts its effects by binding with alpha 2 delta subunit of presynaptic voltage gated Ca2+ channels and has antinociceptive, antihyperalgesic, and antiallodynic properties. Pregabalin, another analogue of GABA introduced in 2004 for the treatment of peripheral neuropathy and postherpetic neuralgia. Studies have shown that both of these drugs have been used to reduce the post-operative pain after breast surgeries, spinal surgeries and laproscopic procedures.6, 7 Most of the studies done so far used a lesser dose of prgabalin and gabapentin as pre-anesthetic medications for reducing the pain post-operatively, very few studies used a higher dose. The present study aims to evaluate the effects of the addition of Pregabalin and Gabapentin in reducing post-operative pain in patients undergoing laparoscopic cholecystectomy.

To compare and evaluate the effects of premedication drugs Pregabalin or Gabapentin versus placebo for attenuation of postoperative pain among patients undergoing laparoscopic cholecystectomy under general anaesthesia.

A prospective comparative study was conducted for a period of 6 months in the department of anesthesiology of our medical college hospital. The study was started after getting the approval from the institutional ethical committee and the informed consent was obtained from all the study subjects involved in the study. All the patients posted for elective laproscopic cholecystectomy in the age group between 20 and 60 years with ASA score of either 1 or 2 were included as our study subjects. Patients having history of hypersensitivity to our test drugs, pregabalin or gabapentin were excluded from the study. A total of 90 study subjects were included in our study, the sample was taken following quota sampling which is a type of non-random sample technique. The entire study subjects were randomized into three groups of 30 each following a computer generated random number table and a double blinding technique was followed were both the patient and the investigator were not aware of which drug was used on the patient.

Group B subjects received 3 tablets of Beplex forte (as placebo), Group G subjects received 3 tablets of Gabapentin 300mg (total 900mg) and Group P subjects received 3 tablets of Pregabalin 50mg (total 150mg). Pre-medication tablet Alprazolam 0.5 mg, Pantaprazole 40 mg was given to all the patients involved in the study. Along with it 3 tablets of Beplex Forte, Gabapentin or Pregabalin depending on the group they belong to was given 60 min before the start of the surgery with sips of water. Standard monitors like pulse oximetry, NIBP, and electrocardiography were connected, and baseline heart rate, systolic blood pressure, diastolic blood pressure, and mean arterial pressure were recorded – before and 15 mins after giving the premedication drugs. General anaesthesia was started with intravenous injection of Midazolam (0.02mg/Kg) and Fentanyl (2mcg/kg). Patients were pre-oxygenated with 100% oxygen for 3 minutes by anatomical face mask. Induction was done with iv propofol (2mg/kg) and vecuronium (0.08mg/kg) and after 3 minutes laryngoscopy was done and appropriate size endotracheal tube was placed in trachea. Anaesthesia was maintained with 66% N2O, 33% O2 and 1% isoflurane. Repeat dose of muscle relaxant vecuronium (0.02mg/kg) were given as and when required. Patients were mechanically ventilated with ventilator settings titrated to maintain ETCO2 at 30-40mmHg.

The blood pressure, heart rate and SpO2 were measured every 5 minutes for the first half an hour after induction and then once every 15 minutes till the end of the surgery. Post-operatively degree of pain was measured based on the Visual Analogue Scale and when the patient experienced pain more than 4 on VAS, rescue analgesia was given in the form of Inj. Tramadol (1mg/kg). The pain score was recorded every 30mins for the first 2 hours, then hourly for next four hours, then once every two hours till 12 hours post-operatively. The total amount of rescue analgesia required in each group was noted. Sedation score was measured using Ramsay sedation Scale at hourly intervals for 12 hours. Occurrence to adverse events were recorded and documented.

Demographic and intraoperative characteristics of the study subjects 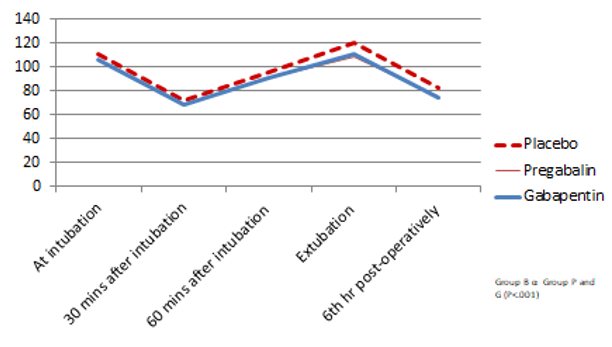 Comparison of mean arterial pressure between the three groups 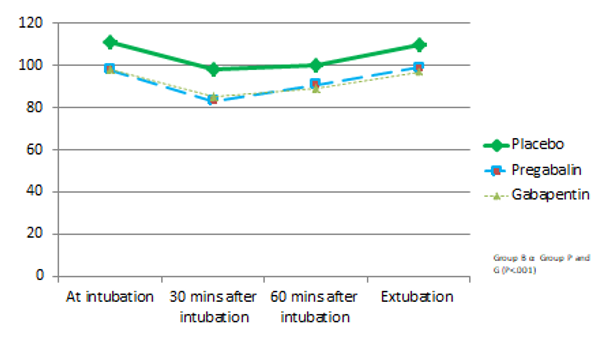 Comparison of Ramsay sedation score between the three groups

Occurrence of adverse event among the study subjects

Gabapentin and pregabalin are the most common drugs used in the treatment of neuropathic pain for many years and recent studies have started showing gratifying results of these drugs in management of post-operative pain but not much studies have been done on comparing these two drugs in post-operative pain management.11, 12 So the present study compared these drugs along with a placebo to assess the efficacy of these drugs in reduction of pain in the post-operative period. In the present study we used 150 mg pregabalin and 900 mg of gabapentin as pre-emptive analgesia for post-operative pain management and it is almost similar to the dosage used by Peach et al., Jokela et al., and Agarwal et al., few studies have also used 300 mg pregabalin and 900 mg gabapentin.6, 7, 13, 14 Most of the previously done studies used these drugs particularly in day care surgeries and mostly it was laproscopic gynaecological procedures whereas in our study we used it in patients who were undergoing laproscopic cholecystectomy.15, 16

In the current study we found the hemodynamic parameters such as pulse rate and mean arterial pressure were almost similar in both the pregabalin and gabapentin group whereas both these parameters were high in the placebo group and hence both pregabalin and gabapentin were found to be hemodynamically stable drug. Similar type of results was also shown in the studies done by Saraswat et al., Tippana et al. and Van Elstraete AC et al.9, 10, 17 In the present study we assessed the perception of pain in the patients by using VAS pain scale from the first hour of the post-operative period till 24 hours and it was found that the pain score for the patients in the pregabalin group was significantly less when compared to the pain score of the patients in gabapentin and placebo group and this shows that pregabalin 150 mg given in the immediate pre-operative period is very much effective in controlling the post-operative pain for a longer duration compared to gabapentin 900 mg or a placebo drug. Our results are almost in par with the study done by Agarawal et al. in the year 2008, Sahu et al. in 2010 and Swarup Paul et al. in 2016. 7, 14, 18 Whereas a study done by Peach et al in 2007 on comparing pregabalin and placebo for minor gynaecological procedures found no statistical significant difference in the pain score between the two groups.6

In the present study sedation was assessed using Ramsay sedation score and it was shown that no significant difference was observed in the sedation score between the three groups and it proves that the sedation property of pregabalin and gabapentin is almost similar. Previously done studies had also shown a similar type of results. In our study the rescue analgesic used in the post-operative period is much higher in the placebo group followed by gabapentin group compared to pregabalin group and the difference was found to be statistically significant. The rescue analgesic used in our study was tramadol injection. Similar type of inference was shown in the studies done by Joshi GP, Taylor CP and Gayathri K B et al.16, 19, 20

Occurrence of somnolence and dizziness was less in pregabalin group compared to gabapentin group but the difference was not found to be statistically significant, whereas occurrence of nausea and vomiting is much less in the pregabalin group compared to gabapentin and placebo and the difference was found to be statistically significant. In the study conducted by Gajraj showed that somnolence and dizziness are the most common side effects reported almost equally in both pregabalin group and the gabapentin group.21 In another study done by Turan et al. found that the incidence of nausea and vomiting are significantly lower in pregabalin and gabapentin group compared to placebo group, for which the reason was mentioned as due to lesser dose of rescue analgesic given in these two groups, which might be the reason in the present study also.22

Pregabalin and gabapentin have proven a potential role as post-operative analgesic agent. Pregabalin given in the form of oral dose of 300 mgs as pre-anaesthetic agent is very effective in managing post-operative pain as patients in this group required lesser dose of rescue analgesic compared to gabapentin given in the dosage of 900 mgs. Further, pregabalin and gabapentin had a similar type of hemodynamic and adverse events. So it can be concluded quoting that pregabalin can be effectively used as a part of the multimodal analgesic to prevent acute postoperative pain among patients undergoing elective laproscopic cholecystectomy.