Godara, Goyal, Goyal, and Carpenter: Comparing efficacy of ibutilide and amiodarone for cardioversion in atrial fibrillation after coronary artery bypass grafting- A prospective and randomized study

Background: Ibutilide is less frequently used drug for atrial fibrillation (AF) in postoperative coronary artery bypass grafting (CABG) patients as compare to amiodarone. We therefore investigated the comparative efficacy of ibutilde and amiodarone for cardioversion in atrial fibrillation after CABG.

Aim: To compare the efficacy of ibutilide and amiodarone for cardioversion of AF in post CABG patients.

Materials and Methods: Total 80 post CABG patients who developed AF were divided into two groups (Group A) Ibutilde and (Group B) Amiodarone respectively. The cardioversion time and cardioversion rate were measured.

Conclusion: Ibutilide was as effective as amiodarone for restoration of sinus rhythm in postoperative coronary bypass grafting patients who developed atrial fibrillation in their postoperative intensive care unit stay. Ibutilide may be superior to amiodarone in terms of hemodynamics and systemic side effects.

AF is a supraventricular tachyarrhythmia diagnosed through irregular atrial activities and disappearance of atria mechanical function. In electrocardiogram (ECG), AF appears as quick vibrating waves replaced by P-waves and often accompanied by quick and irregular ventricular response. During AF, multiple foci can serve as pacemakers with rapid irregular firing resulting in randomly irregular atrial depolarization at a rate of 350-450 per minute. The electrocardiogram is notable for an uneven irregular baseline without any recognizable P wave due to the chaotic atrial depolarization and normal QRS complexes.1 AF is a relatively common arrhythmia that may be observed in otherwise normal subjects and also in those patients with rheumatic heart disease, ischemic heart disease, thyrotoxicosis and hypertension.2, 3 A frequent postoperative complication of most types of cardiac surgeries, AF occurs in wide range of incidence between 10 and 60% in those undergoing CABG procedures.4, 5

The occurrence of postoperative AF has been associated with prolonged length of stay; ICU admission; a greater need for re-intubation; persistent congestive heart failure (CHF); stroke and increased overall costs. Typical conditions associated with AF include hypotension caused by rapid ventricular response, myocardial infarction and death. Additionally patients with AF are older adults with co-existing conditions 6, 7 such as compromised ventricular functions, hypertension, diabetes mellitus, renal insufficiency, peripheral vascular disease, a history of congestive heart failure or myocardial infarction, dyspnoea and cerebrovascular problems.8, 9, 6, 7, 10, 11, 12, 13, 14 So AF in postoperative CABG patients has to be managed properly to decrease both patient morbidity and health care cost. During the perioperative period, management of patient experiencing AF is often times difficult as occurrences vary in degree of intensity and frequency. Various pharmacologic measures have been proved to be effective for treatment of AF apart from electrical cardioversion.

Ibutilide fumarate is a methane sulfonilide antiarrhythmic agent which belongs to class III antiarrhythmic agents and is approved for the conversion of atrial fibrillation and atrial flutter to sinus rhythm. Ibutilide prolongs the refractory period at the atrial and ventricular levels by activating a slow inward sodium current.15, 16

Amiodarone is another class III antiarrhythmic agent which is structurally benzofuran derivative and was initially introduced as an anti-anginal drug. Amiodarone prolongs repolarization and refractoriness in the SA node, in atrial and ventricular myocardium, in the AV node and in His-purkinje system.

Currently amiodarone is being used as a treatment of AF in most of the cardiac centres worldwide. But as the literature suggest the ibutilide also has promising results in the treatment of atrial arrhythmia with reduced rate of complications. So considering the paucity of information regarding comparative effects of ibutilide in postoperative CABG patients this study was carried out to compare the efficacy of Ibutilide and Amiodarone for Cardioversion in Atrial Fibrillation after CABG.

After the approval of institutional ethics committee (IEC) and taking informed consent 80 postoperative CABG patients, who developed AF, were randomly allocated to two groups. Sample size is calculated at 80% study power and alfa error of 0.05 assuming standard deviation of 405 minutes in mean time to conversion of atrial fibrillation to sinus rhythm in ibutilide group as found in reference study. (Bernard et al.)17 For minimum detectable mean difference of 300 minutes in time to conversion from atrial fibrillation to sinus rhythm, 29 patients in each group are required as sample size for present study which is further enhanced and rounded off to 40 patients in each group as final sample size expecting 20% dropouts or attrition. Randomization was done using computer generated random numbers which were then sealed in opaque envelopes.

Comparison of effect of both drugs on QT interval

None of patients in group A showed increased requirement of inotropes because of deteriorating hemodynamic condition but 2 patients in group B needed to increase the inotropes to stabilize the hemodynamic. This comparison in both groups was statistically insignificant. (p value= 0.494). None of the total 80 patients in both groups required prolonged or increased requirement of mechanical ventilation. Effect of both study drug on QT interval was found to be statistically insignificant. (p value group A =0.275, group B=0.071). 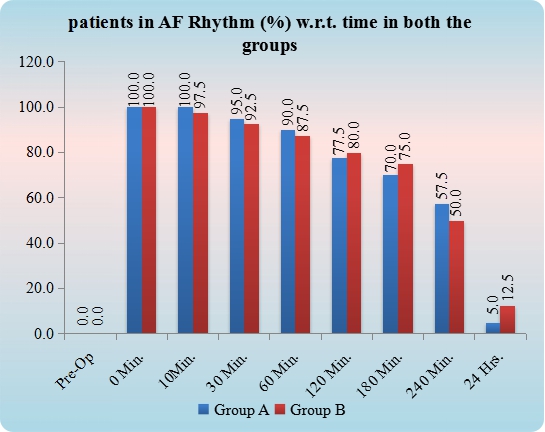 In our study, we observed that mean time of conversion in both groups was statistically insignificant. (p= 0.235) similar findings were demonstrated by Bernard et al.18 whereas Dong Xio et al.17 concluded that the mean conversion time for ibutilide group was significantly shorter than amiodarone group. This may be because they included both AF and atrial flutter (Af) in their study and because of more effectiveness of ibutilide for conversion of Af to sinus rhythm. Kafkas NV et al.19 also showed that both drugs were equally effective in converting the recent onset atrial fibrillation to sinus rhythm.

At 4 hrs time and at 24 hrs time conversion rate in both groups was statistically insignificant (p= 0.432). Similar results were seen the study done by Bernard et al18 and Madhuri et al20 whereas Das M K et al23 showed that conversion rate for ibutilde group was significantly lower(55%) this may be because they included patients with AF of duration >24 hrs and < 3 months and with all type of cardiac surgery like valve surgery, CABG, or combined procedure and patients with LVEF <35% were also included. David R. Vinson et al21 also showed that at 4 hrs period of acute onset of atrial fibrillation the cardioversion rate of ibutilide was 55%. Daniel J.Pallin et al.22 showed that when used for AF or Af in emergency department ibutilide was associated with cardioversion rate of 55% at 4 hrs of onset.

Comparison of number of patients requiring increased dose of inotropes because of significant hypotension was statistically insignificant (p=0.494) whereas Bernard ED et al.18 concluded that incidence of severe hypotension was more in amiodarone group this may be because they studied the patients developing AF within 3 hrs of cardiac surgery which itself may be more prone condition for hemodynamic instability.

In our study comparison of QT interval at baseline with at 24 hrs after drug administration was statistically insignificant, whereas Kathy Glatter et al.23 observed that QT interval was prolonged after ibutilde administration. This may be because they included the patients who were having the history of long term AF.

During our study time none of our patient developed sustained or non-sustained polymorphic ventricular tachycardia whereas Marcus G Hennersdorf24 observed in their study that 11% of patients developed non-sustained torsade de pointes tachycardia this may be because they included all the patient in intensive care unit developing atrial fibrillation or flutter irrespective of their primary diagnosis.

Baseline values between two groups were comparable at all the times. Time of onset of AF was statistically insignificant. HR increased in both groups at onset of AF which is constant with pathophysiology of AF. HR in both groups was comparable and statistically insignificant at all the times except 120 min, and 240 mins. Mean HR was higher in group B except base line and at conversion to sinus rhythm. SBP, DBP, MBP decreased in both groups after onset of AF but returned near to base line after conversion to sinus rhythm. This fall was attributable to the pathophysiology of AF.

Limitations of the Study

Our study demonstrates that ibutilide is as effective as amiodarone for restoration of sinus rhythm in postoperative CABG patients who developed AF in their postoperative ICU stay. Ibutilide may be superior to amiodarone in terms of hemodynamics and systemic side effects.

S Borzak JE Tisdale NB Amin Atrial fibrillation after bypass surgery: does the arrhythmia or the characteristics of the patients prolong hospital stay?Chest1998113148991

D Xiao D Wenhui A meta-analysis. Ibutilide versus amiodarone in cardioversion efficiency and safety of atrial fibrillation and atrial flutter2011973A12210.1136/heartjnl-2011-300867.354