Shamjith K, Aboobacker C P, Baby, and Kutty C: A comparative study to assess the efficacy of addition of dexmedetomidine to levobupivacaine in brachial plexus block

Background: Brachial plexus block is one of the best surgical technique for upper limb surgeries. It is a good anesthetic and analgesic agent. Though levobupivacaine has a duration of action of three to eight hours it has an acceptable analgesic property and few other practical constraints. Addition of vasoconstrictors like α-adrenergic agonists, hyaluronidase, neostigmine, opioids have been found to be effective. Dexmedetomidine, an α2 receptor agonist has found to be a better adjuvant to levobupivacaine by few literatures.

Materials and Methods: This study was conducted after ethical committee clearance in a tertiary care medical college hospital in northern Kerala, India. 60 patients between the age of 18 and 60 years planned for upper limb surgery under brachial plexus block, who fulfilled the inclusion and exclusion criteria were included in the study. A pre anesthetic checkup was done to assess the patient before including in the study. The patients who were included in the study were randomly assigned into two groups – one group received 1 ml (100µg) dexmedetomidine with 39 ml of 0.5% Levobupivacaine(LD group) and the second group received 1 ml of 0.9% normal saline and 39 ml of 0.5% Levobupivacaine(LS group) as anesthetic agent through sealed envelope technique. The clinical history, vitals and hemodynamic parameters were monitored and noted prior to and during the surgery. The data collected was analyzed and tabulated.

Results: There was no statistically significant difference between both groups with respect to age, Gender and weight signifying proper random allocation of study subjects. None in LD group required post operative analgesia. The mean duration of onset of sensory and motor block was earlier and duration of motor and sensory analgesia was prolonged with the addition of Dexmedetomidine to Levobupivacaine. The hemodynamic stability was better with Dexmedetomidine. Bradycardia was reported in 20% of study participants who were administered dexmedetomidine

The effectiveness of Brachial plexus block had been proved as the best for a long period for the surgeries in upper limb.1 It is found to be one of the efficient methods for emergency and routine upper limb surgeries. It provides very good intraoperative anesthesia as well as postoperative analgesia without any systemic side effects. The complications like side effects of anesthetic agents, stress of tracheal intubation and laryngoscopy are avoided in this type of block and therefore commonly used in regional nerve block of upper extremity. Post operatively, patients are free from edema, pain, cerebral depression, nausea, vomiting and vasospasm

Levobupivacaine has the duration of action ranging from three to eight hours and hence it is the most commonly used local anesthetic drug.2 This anesthetic drug has established itself as cheaper and safer for many years.3 But patchy or incomplete analgesia and delayed onset are few of the practical constraints. Few drugs are added to levobupivacaine in trial to decrease these limitations, to upsurge the quality, prolong the duration of action and analgesia.

Alpha 2 adrenergic agonists not only decrease the requirements of intraoperative anesthetic agents, but also they have cardiovascular stabilizing properties, sympatholytic analgesic and sedative property. In order to reduce the time of onset of nerve block, to prolong the duration of block and to improve the quality of blockade, these can be given in peripheral nerve blocks, intrathecal, epidural either alone or with local anesthetic agents.2, 4

An α2 receptor agonist, dexmedetomidine, is eight times more sensitive than clonidine.5, 6 Researches have found that dexmedetomidine, when used in many animals and humans had improved the onset and duration of motor / sensory blockade. When used as an adjuvant to local anesthetic agents in peripheral nerve blocks, it has increased the duration of analgesia.7, 8, 9, 10, 11, 12, 13, 14

This cross sectional comparative study was carried out from November 2012 to November 2013 on sixty patients in a tertiary care medical college in northern part of Kerala, South India after getting the institutional human ethical committee concurrence. Patients posted electively for upper limb orthopedic and soft tissue lesion, between the age of 18 and 60 years of any gender, weighing above 60 kilograms with ASA Grade I and II and those who fulfilled the selection criteria and those who gave consent to participate in the study were included in the study. Patients with chronic kidney disease, hypertension, pregnant women, uncontrolled diabetes mellitus, cerebrovascular accident, COPD, coronary artery disease on anticoagulants, those with history of bleeding disorders, and those who were allergic to amide local anesthetics /alpha 2 agonist were excluded from the study.

A pre-anesthetic checkup including complete history, general and systemic examination and fitness was assessed for all patients. Complete hemogram like RBC, WBC counts, platelets and other tests like blood urea, random blood sugar, bleeding time, clotting time, serum creatinine and ECG is mandatory if the subject is more than 45yrs. Patients were informed to be on nil per oral after 8 pm on the previous day of surgery. The participants were divided randomly into two groups of thirty each using sealed envelope technique.

The first group (LD group) was administered 1 ml (100µg) dexmedetomidine with 39 ml of 0.5% Levobupivacaine. The second group was given 1 ml of 0.9% normal saline and 39 ml of 0.5% Levobupivacaine as anesthetic agent. Once the study participant entered the operation theatre, the chief consultant had used the pre assigned 30 envelope for each group in the pre shuffled order. Neither the investigator nor the patient knew which group they were assigned (double blinding).

The vital signs like respiratory rate, heart rate, systolic and diastolic blood pressure, pulse rate and oxygen saturation were monitored and noted immediately on entering the OT. Ringer lactate was started in the already secured intravenous line. Brachial plexus block was applied through the supraclavicular approach.

Nerve locator (Fisher and Paykel, New Zealand) was used for neural localization and it was achieved by connecting to a 22 G, 50-mm-long stimulating needle (Stimuplex, Braun, Germany). The location end point was a distal motor response with an output lower than 0.5 milliamperes in the median nerve region. Local anaesthetic solution in the labelled coded syringe was injected following negative aspiration.

Pin prick method was used to assess the sensory block. Sensory onset was considered when there was dull sensation to pin prick along the distribution of any two of the following nerves like musculocutaneous nerve, radial nerve, median nerve, ulnar nerve. When there was complete loss of sensation to pin prick, we can consider it as complete sensory block. Modified Bromage scale. Motor and sensory blocks were assessed for 30 minutes for every 3 minutes until after injection, and then every 30 minute until they have resolved.15

Side effects like heart rate less than fifty per min (bradycardia) and blood pressure less than 20% with respect to resting conditions (hypotension) were treated with appropriate measures. Then we noted the period of motor and sensory blocks once the surgery is started.

When the subject’s visual analogue score >5, a rescue analgesia like intramuscular diclofenac sodium 75mg (1.5 mg/kg) was administered. Ramsay Sedation Scale (RSS) was used to assess the sedation before the block and 15 min then after.

All the data noted was entered in Microsoft excel sheet and was double checked. SPSS 16 software was used to analyze the collected data. The categorical variables were tabulated as frequency and percentages. Continuous variables were presented as Mean ± Standard deviation. Independent sample T- test was used to measure the association between the vitals at different times. Chi-square test was applied to assess the relationship between the categorical variables. P<0.05 was considered as statistically significant.

Association between various parameters between groups

Comparison of mean values of various parameters between both groups

Comparison of heart rates between both groups at different time intervals

Comparison of mean values of systolic BP between both groups

Comparison of mean values of diastolic BP between both groups

Comparison of occurrence of side effects between both the groups 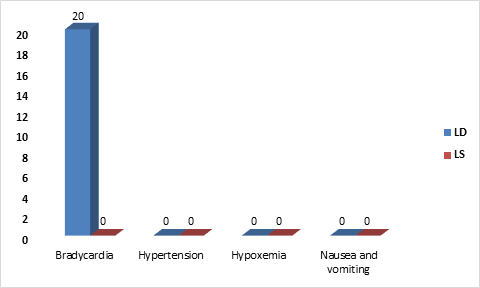 The mean duration of onset of sensory and motor block was nearly 4 min earlier in LD group compared to LS group.(5.32 vs 9.17 min) Onset of motor blockade was also 4 minutes earlier in LD group compared to LS (8.35 vs 12.28 min). The mean duration of sensory block(531 vs 921 min) and motor block(553 vs 943 min) were 390 minutes lesser respectively between both the groups. The duration post-operative analgesia was 402 min lesser between both the groups (578 vs 980 min). All the results are statistically significant. (Table 2)

The diastolic blood pressure, systolic blood pressure, heart rate were comparatively maintained lesser than baseline for LD group from fifth min after induction of drug till two hours. (Table 3, Table 4, Table 5). Twenty percent of study population in LD group had bradycardia compared to none in LS group (chi-square value - 6.667; P value – 0.009). Bradycardia was noted in 20% if the study population. No other adverse effects was recorded in the study subjects.

This cross-sectional study was done while applying supraclavicular brachial plexus block in upper limb surgeries to assess the impact of dexmedetomidine as an adjuvant drug to levobupivacaine. There is no statistical significance in age, sex and weight between both the groups signifying both the groups were similar before the start of the study and the sampling methods were followed appropriately.

Dexmedetomidine 100 μg when used as an adjuvant to levobupivacaine 0.5% reduces the onset of sensory and motor blockade, prolongs the analgesic effect of motor and sensory block. The mechanism of action of α2 agonists causing sedation and analgesia is not completely known, but it seems to have multifactorial. Centrally, α2 agonists inhibits the substance P release at dorsal root neuron in the pain pathway and activates α2 adrenoceptors in the locus coeruleus and thereby causing analgesia and sedation. Peripherally, α2 agonists decrease the release of noradrenaline, produce analgesia and produces α2 receptor-independent restraints on nerve action potentials. Activation of cation current by hyperpolarization causes the peripheral action of dexmedetomidine. For subsequent firing the nerve will not return from hyperpolarized state to resting membrane state.16, 17, 18, 19 Studies done by various other authors have also showed that addition of dexmedetomidine reduces the onset time of motor and sensory block and prolongs the duration of postoperative analgesia.15, 20, 21, 22, 23, 24

Addition of dexmedetomidine improves the hemodynamic stability of the patients. Similar findings were obtained in the several other researches conducted world wide.25, 26, 27

Bradycardia was noted in one fifth of the patients who were administered dexmedetomidine. Which coincides with the findings of Talke et al.28

The onset of motor and sensory blockade was reduced when dexmedetomidine was used as an adjuvant to 0.5% levobupivacaine and it also prolongs the duration of analgesia. It provides a good intraoperative sedation as well and helps to reduce the postoperative analgesic requirement. However dexmedetomidine may cause bradycardia in limited cases, which is reversible with atropine. Hence we conclude from the study dexmedetomidine can be an ideal adjuvant for levobupivacaine for upper limb surgeries applying brachial plexus block.

D Memis A Turan B Karamanlioglu Z Pamukçu I Kurt Adding dexmedetomidine to lignocaine for IVRAAnesth.Analg20049883540